When the couple was stationed in Scotland and living in a local village, they made friends with a man who played in a local soccer league.

"Annie asked if she could go out and play and the guy was straight up, 'You know, soccer is really not for girls. It's a man's sport,'" John said. "So, she comes home and she's just livid.”

She of course decided to go to the field.

They took the bet and Annie scored a goal. Her opponents were so impressed that they invited her to attend a match featuring the famed Glasgow Rangers in Scotland’s soccer capital.

Or, how about this scenario that took place in 1999 when the couple were stationed at Camp Lejeune when Annie was seven-and-a-half months pregnant with her first child while pursuing her bachelor’s degree in nursing at the University of North Carolina-Wilmington?

"She has a belly the size of a soccer ball," John said. "We're all standing on the sidelines watching her. Everything's going well. All of a sudden, the other team kicks the ball, she goes up to head it and it hits her in the belly. And we're all standing there on the sidelines and we're like, 'Oh crap!' Everyone on the field is like, 'Are you okay?' Ann Marie is like, 'I'm. Fine, Let's go, finish the game!'”

"The game finishes and you have Marine Corps Special Operations operators, you have Navy SEAL operators and Marine Corps infantry operators standing on the sidelines negotiating with this woman as if they are scared [of her] because they're all like, 'Okay, listen, we know your passion, and we're not here to upset you, but we really think maybe just until the baby's born, maybe you know - just for a little while, we're not saying forever - just for a little while, maybe not play soccer.' "

Moral of the story:

Don't get between Annie Raniowski and her soccer. 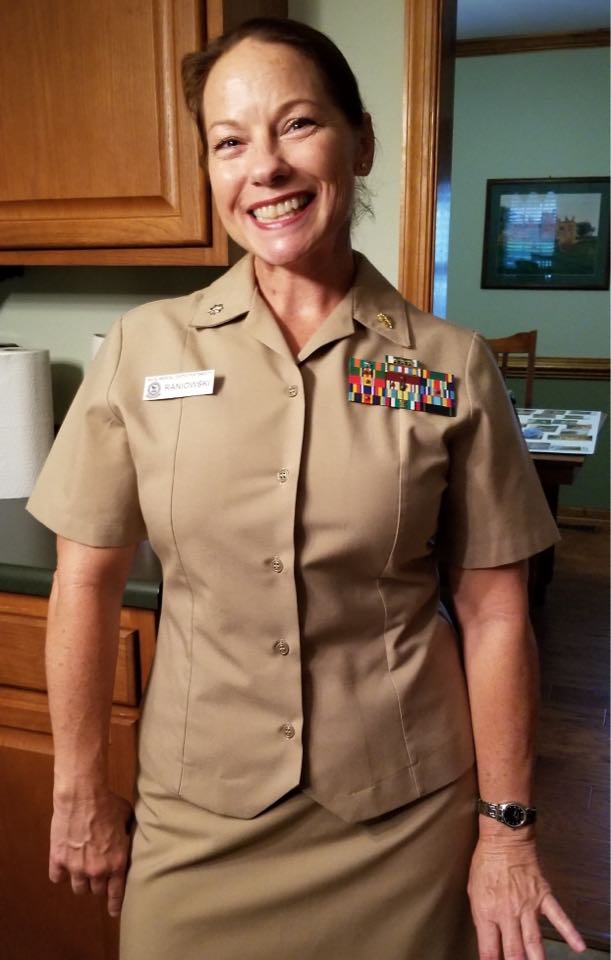 Raniowski, the subject of U.S. Soccer’s Fan Week spotlight, has been a player and a fan of the game, including the U.S. Women's National Team, for decades.

During her Navy retirement ceremonies earlier this fall, Annie received many mementos from her 32 years of service from her ship mates. There also were letters from the President, Secretary of the Navy and Governor.

What she wasn't expecting was a signed letter from a member of the USWNT - defender Kelley O'Hara, a two-time Women's World Cup champion, that arrived along with a personalized USWNT jersey. 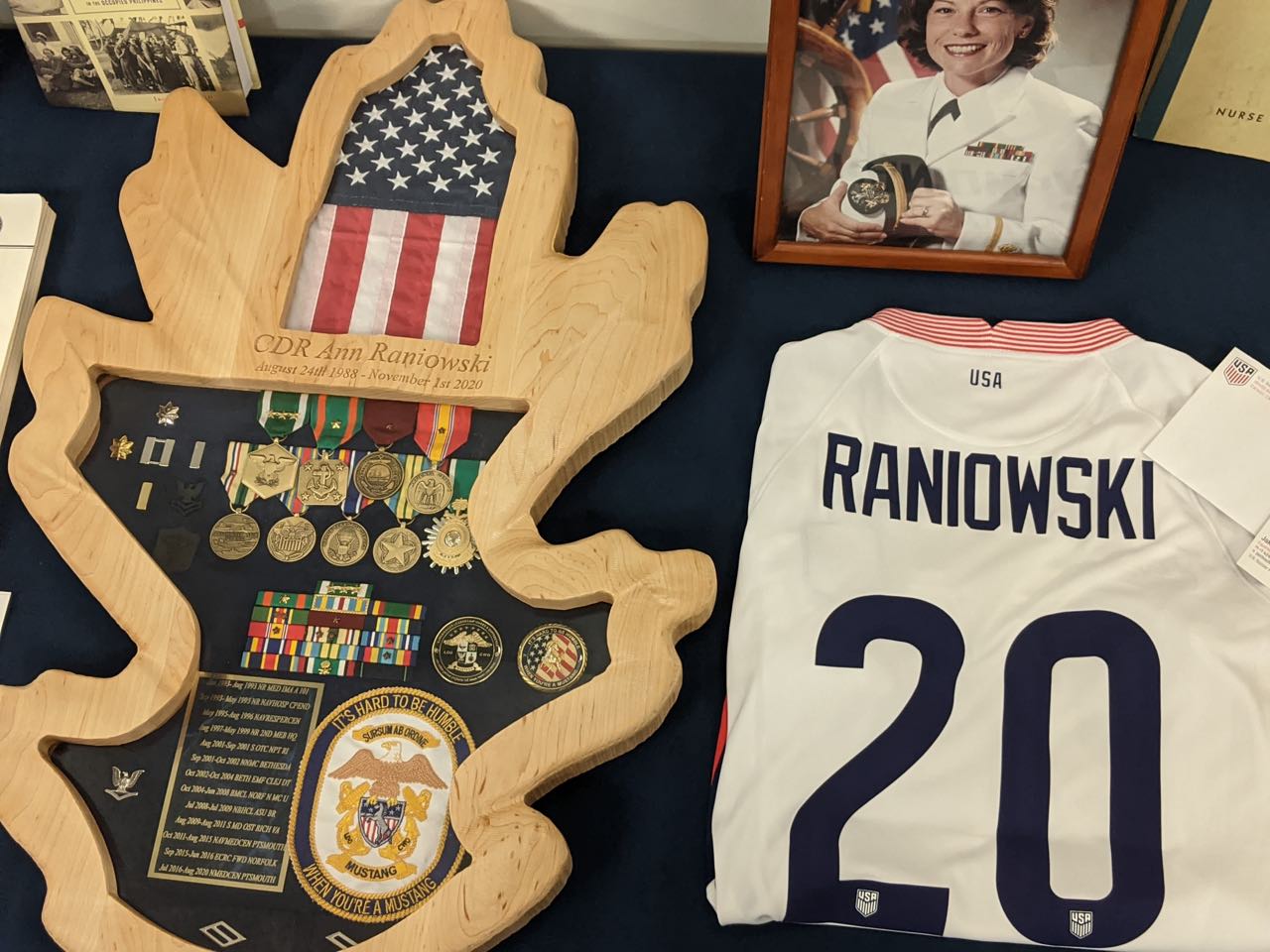 "As an athlete, it's an honor to represent the USA on the world stage, but that opportunity is made possible by the sacrifice and courage of service men and women like yourself," O'Hara wrote. "Having family in the Navy myself - my dad was a Navy pilot and my brother currently is - I know the incredible selflessness and commitment you've shown day in and day out. We are incredibly grateful and inspired by all you do."

Annie said she "was certainly taken back by the degree of her personal touch and family story herself."

"Taking time to write to me demonstrated a high level of respect and admiration that I felt though we had never met," she added. "Not receiving a 'templated' or rubber-stamped signed note went, as we say in the Navy, 'Above and beyond the call of duty!' I will be writing her back as well to say, 'thank you' once again."

John played a major role in procuring the letter and jersey.

"It's just been a wild ride, and very humbling, too because of his efforts," Annie said.

Annie said it was a "tremendous honor" serving her country. "I'm very humbled to have given myself to so many," she added. 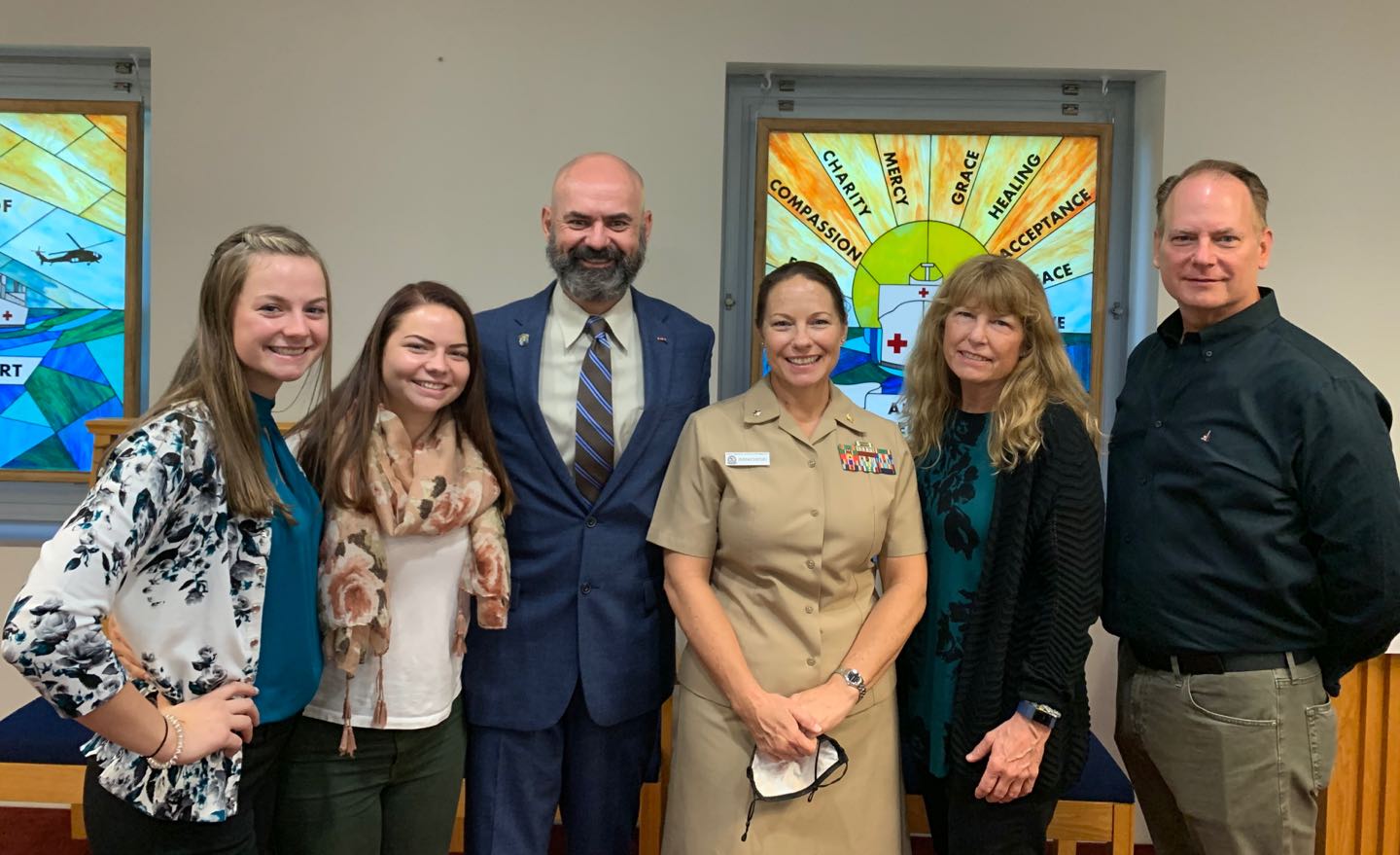 Growing up in Yorba Linda, Calif., Raniowski was the youngest of six children. Following in the footsteps of her older brother Paul, she first played soccer at age six with a team named the Rainbows in the Junior United Soccer Association. While playing for several select teams, Raniowski fell in love with the game.

"I just think it's challenging. It's fun," she said. "I never was a long-distance runner, or did I like track and field. I like team sports. I'm not like one for golf for swimming or anything of that nature. I just feel that camaraderie within you team, your teammates, that just that really appealed to me."

Raniowski has played every position except for goalkeeper, starting on defense, moving up to midfield and forward, which she enjoyed playing the most. Two knee operations might have slowed her down a bit on the field, but it has not stunted her interest in the game.

Now 50, Raniowski admitted she hasn't played as many games as she would have liked to in recent years, but she certainly has understood its value.

"The game of soccer has and hopefully will continue to be a part of my life," she said. "It's been instrumental in just giving me an outlet to get out there and just forget a little bit about what's really troubling you at any one time and kick the ball around."

Due to her Naval commitments, Raniowski hasn't been able to attend as many games as she would have wanted, but she was at the Rose Bowl for the 1999 Women's World Cup Final after one of her sisters obtained tickets. The USWNT and China played 120 minutes of scoreless soccer until the Americans won in a shootout. Brandi Chastain converted the game-winner and Mia Hamm, Raniowski's favorite player, also scored a PK.

"Going to the Rose Bowl, it's just so grandiose," she said. "It was an awesome game."

When she was high school sophomore, Raniowski made up her mind that she was going to join the Navy by entering the Delayed Entry Program. "When I told my mom that I was joining the Navy, she didn't believe me," she said. "Other folks said that she'll probably drop that idea but no."

After graduation two years later in August 1988, Raniowski entered boot camp. Following in the footsteps of her mother, she became a nurse.

"I felt my calling was to be in a profession to help people," she said. "When people are sick, there's many different areas within nursing and medicine you can specialize in. What's so awesome about nursing is that there is so much you can choose from. You can be in research. You don't have to be at the bedside."

Raniowski has been at the bedside of many veterans. She has specialized in mental health.

"Granted, I don't always get to them at their most glorious moment,” she said. “But it's the connection you have with a veteran, especially in the mental health [aspect] when you're dealing with someone, and a challenging situation and just allowing them to talk about some of the good times that they've had."

Given the sport’s global reach, she never had a problem finding teams to play soccer, whether it was on base or against other countries' military teams.

Out of her deployments - which have also included Bahrain and Okinawa, Japan - Guantanamo Bay Naval Base, Cuba could be the most intriguing one. Located in southeastern Cuba, GITMO is the oldest U.S. overseas base, having been in operation since 1903. Since 2002, the base has contained a military prison for alleged unlawful combatants captured in Afghanistan, Iraq, and other places.

Raniowski did not go into great detail about her GITMO experience, except to say she worked with detainees on their mental health. She worked 12-hour shifts at the detention hospital and the behavioral health unit.

"At times it was stressful," she said.

To make it less stressful, the Navy's Morale, Welfare and Recreation Department made sure active-duty officers and sailors had the means to exercise with an array of sports, including soccer.

"It wasn't a very tough from the aspect of your off-time of deployment, because of the resources you had available," she said. "But sometimes dealing with the people that we worked with and care for that was, that's a whole other story." 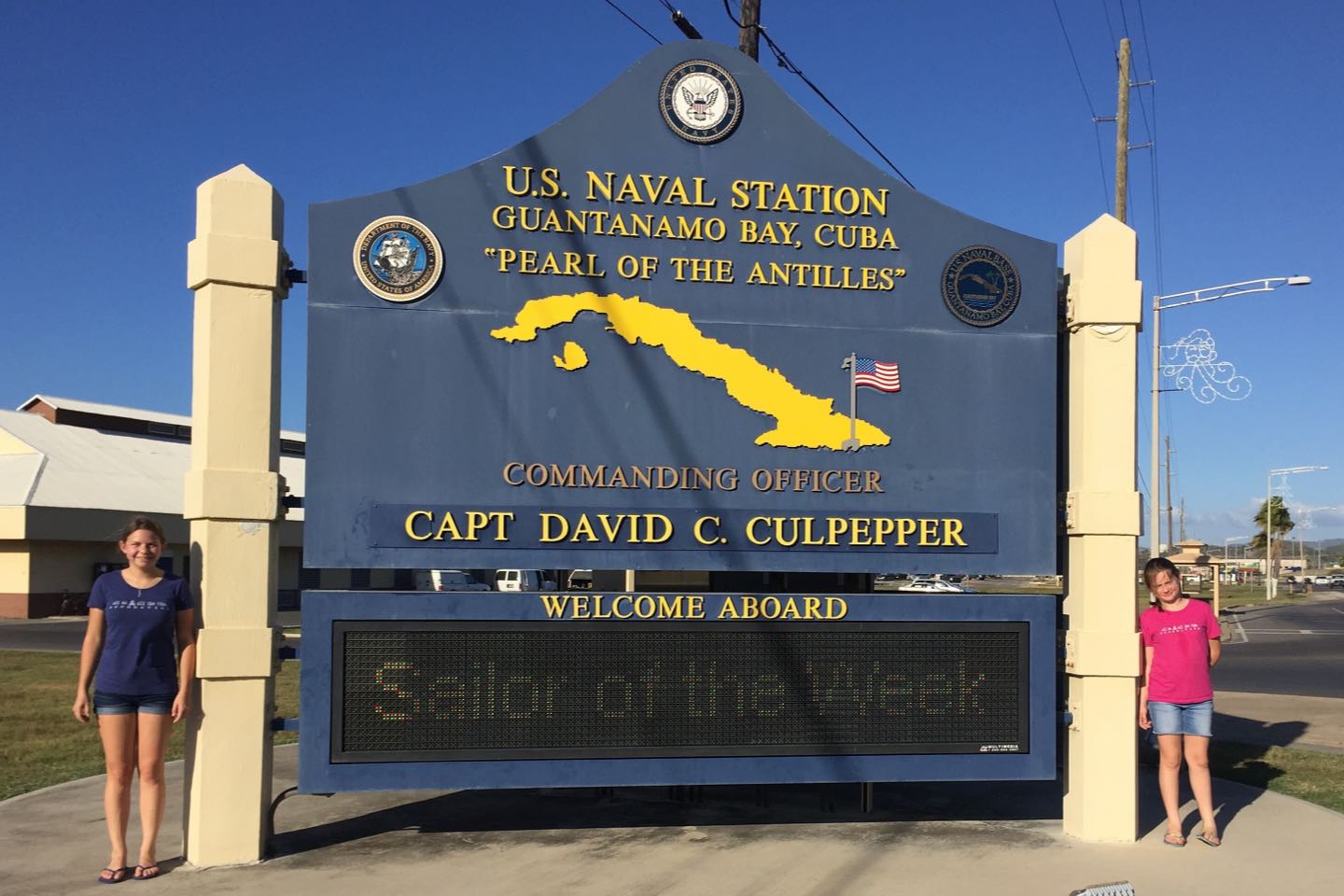 While serving in the Navy, the Raniowskis also raised a family. They have two daughters - Cora, who turns 21 this month, and Kenzie, 16. Cora didn't play soccer while Kenzie did for three seasons before both turned to another passion - equestrian.

Raniowski, who lives in Chesapeake, Va. with her family, might be retired from the Navy, but she certainly has not retired from pursing new goals. She has put up the periscope and started to look what might fill the next chapter of her life, probably the nursing field, including the Veteran’s Administration.

And there might be a visit to a local soccer field or two. With O’Hara being traded to the Washington Spirit on Dec. 2, Raniowski will have the opportunity of thanking the USWNT star in person.

“I will take a look at their schedule once things get back on,” she said. “I need to reach out to her and thank her for sending the nice note.”

For a career and service well done.