Soccer is a Family Affair for Chad and Hollie Adams; How the Family of Eight Navigated Their Passion for the Sport During a Pandemic
Michael LewisDecember 8 2020
Featured

Soccer isn't just another sport in the Adams family household in Wheeling, West Virginia. It’s more a way of life.

Chad and Hollie Adams have six children, two of whom are big-time into soccer and are avid fans of U.S. national team standouts, and another who is named after an iconic star. Not surprisingly, soccer often dominates at the dinner table.

"Soccer is always a discussion because with the access we have today to quality soccer on TV. A game essentially is always on somewhere in the house," Chad said. "The kids are on Instagram, pulling up highlights. 'Hey, look what so and so did, look at what Ronaldo is doing today. Look at this, it's funny.' It is definitely a family affair when the World Cup cycles are here. It's a party. Families are coming over and everyone's watching the game. It's a big deal." 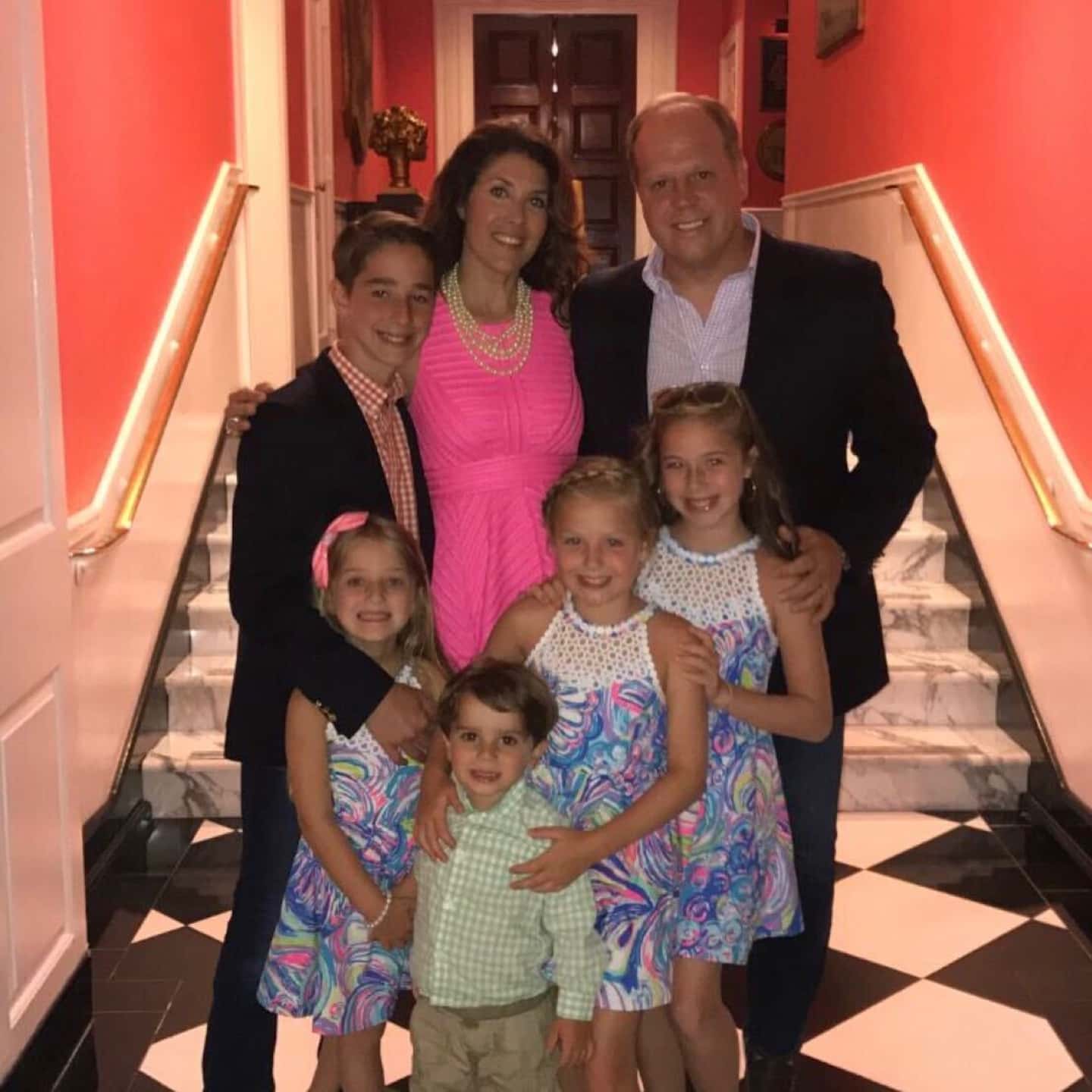 In the 1980s, Chad grew up with two soccer-crazy brothers. Their father, Jay, founded the Wheeling Soccer Club, which has since been rebranded as FC Wheeling.

Before there was an internet, the Adams brothers cut out players pictures from Eurosport catalogues and pasted them on their walls. They devoured Soccer America, then a weekly publication, from cover to cover. All three played soccer at Princeton University. Chad captained the Tigers for two years.

That childhood passion for the game never waned.

Chad, 42, who is a co-founder and principal at Patriot Equity Partners, a real estate investment company, said it "was always like the release of emotion and the chance to express myself, a chance to get out feelings of maybe a rough day or celebrate feeling of a good day or some accomplishment."

While he nurtured that affection for the beautiful game, Chad wanted his six children to discover soccer and their passions on their own:

* Ashton, 16, an avid player and a big Michael Bradley fan, wants to continue playing in college.

* Ava, 11, another serious player, lists Alex Morgan and Julie Ertz as her favorite players on the U.S. women's national team.

* Boden, 6, is just embarking on his soccer career on a recreational team. He probably will begin travel soccer next year.

* Savannah, 13, and Bella, 9, have played the sport, but pursued interests in dance.

"They both do well and enjoy it," Chad said. "They enjoy the kind of spontaneous pickup games that happen in the yard. They’ll both jump in. Bella, once told us, 'I don't want to play real soccer, but I love to play backyard soccer.' So, that is great. We have a full-size goal in the yard, so we have plenty of room to play and have fun. And a lot of times when we do have a chance when we're all home the two soccer players will take the ball and the rest of us will come out. It'll turn into a little family game, which is fun." 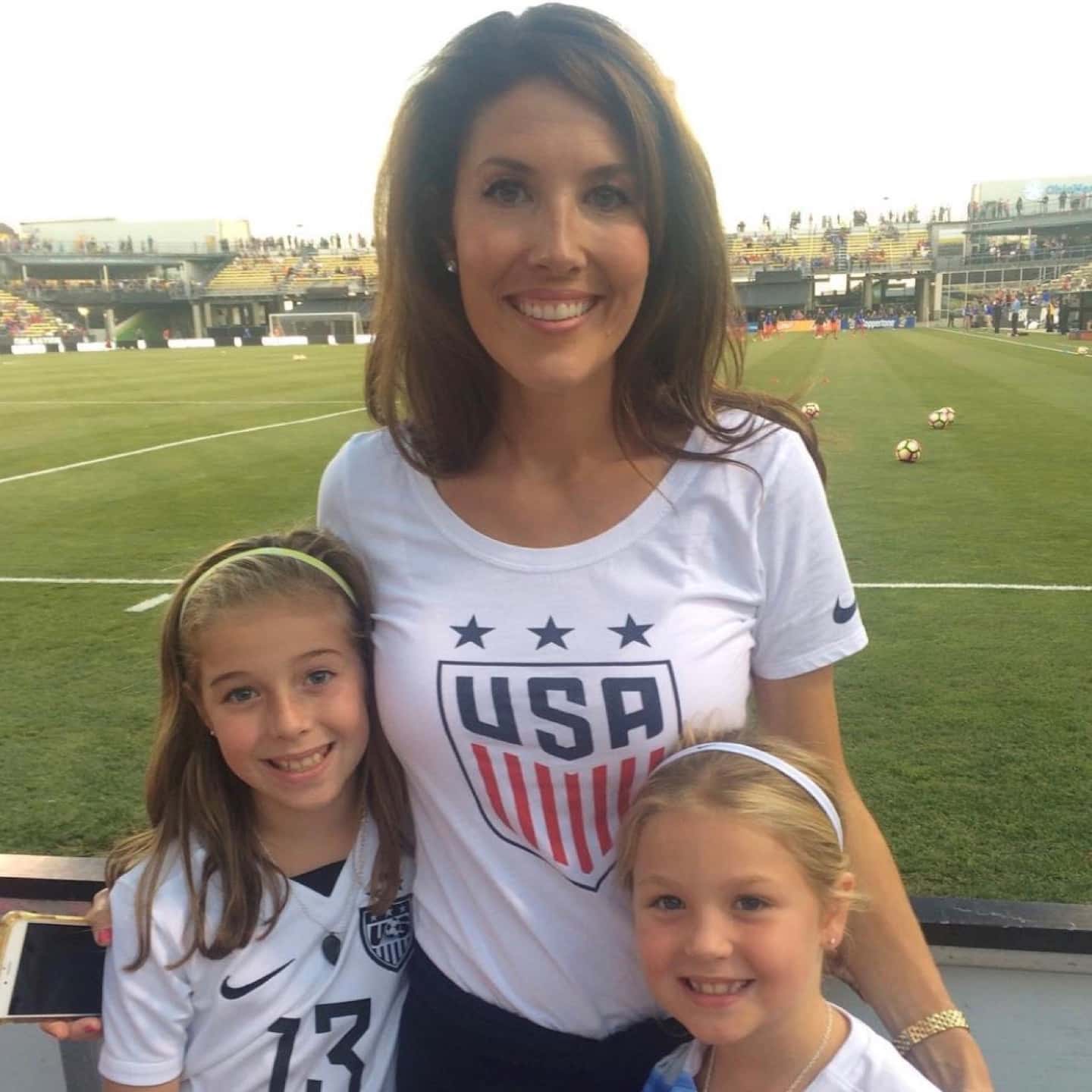 And then there is Beckham, who turned one on Nov. 10. In soccer chronology, he was born three days after the USWNT's 3-2 international friendly win over Sweden in Columbus on Nov. 7, 2019, the team’s first match under head coach Vlatko Andonovski.

"If he doesn't have a good right foot, we're in trouble," Chad quipped.

Hollie, who has a dance background, wasn't into soccer growing up, but became a fan.

"She now understands the game, loves the game," Chad said. "She loves the emotions. She loves what the game provides for our kids and the goals our kids have set ... and the way soccer makes them feel and the outlet and it provides them."

The Adams have gone the extra mile and miles for both the national teams and their children.

When Ashton was eight in 2013, the Adams obtained tickets for the USMNT’s 2-0 World Cup qualifying win over Mexico in Columbus, Ohio. Chad was recruited by former USMNT coach Bob Bradley to attend Princeton before the latter joined D.C. United as an assistant coach. Chad's younger brother, Jason, and Michael Bradley were ball boys together at Princeton games.

"I didn't really know that this game would affect him so much, but being there at that age impacted him like it did me and my brothers," Chad said of watching his son, Ashton, take in the match. "We spent the whole day there. We saw Michael at the team hotel before the game. We got to the game to see the American Outlaws, the excitement and how early the stadium was full. I described it like three S's; the sights, the smells and the sounds were just intoxicating for all of us, but really for him. That night he really fell in love with the game and the culture. When we got back, it was more of 'Hey, when's the team playing again?' He wanted to watch more. He wanted to be involved more. He was with his ball more. He is 16 now and just absolutely in love with the game."

The Adams would visit Bradley at the team hotel prior to other USMNT matches. "Michael has been a mentor of sorts for Ashton, always willing to offer encouragement, a birthday wish, send a video, send the jersey,” Chad said. 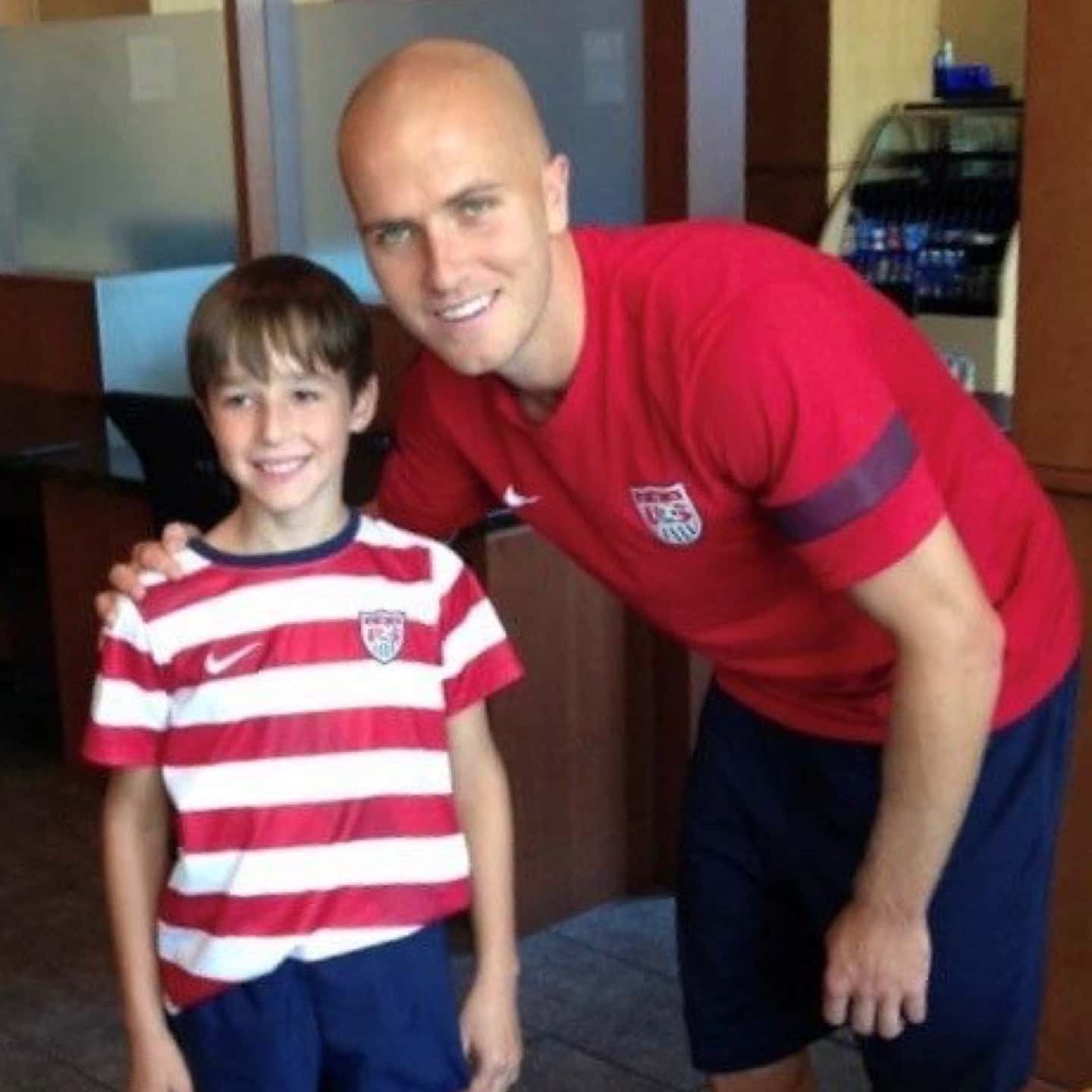 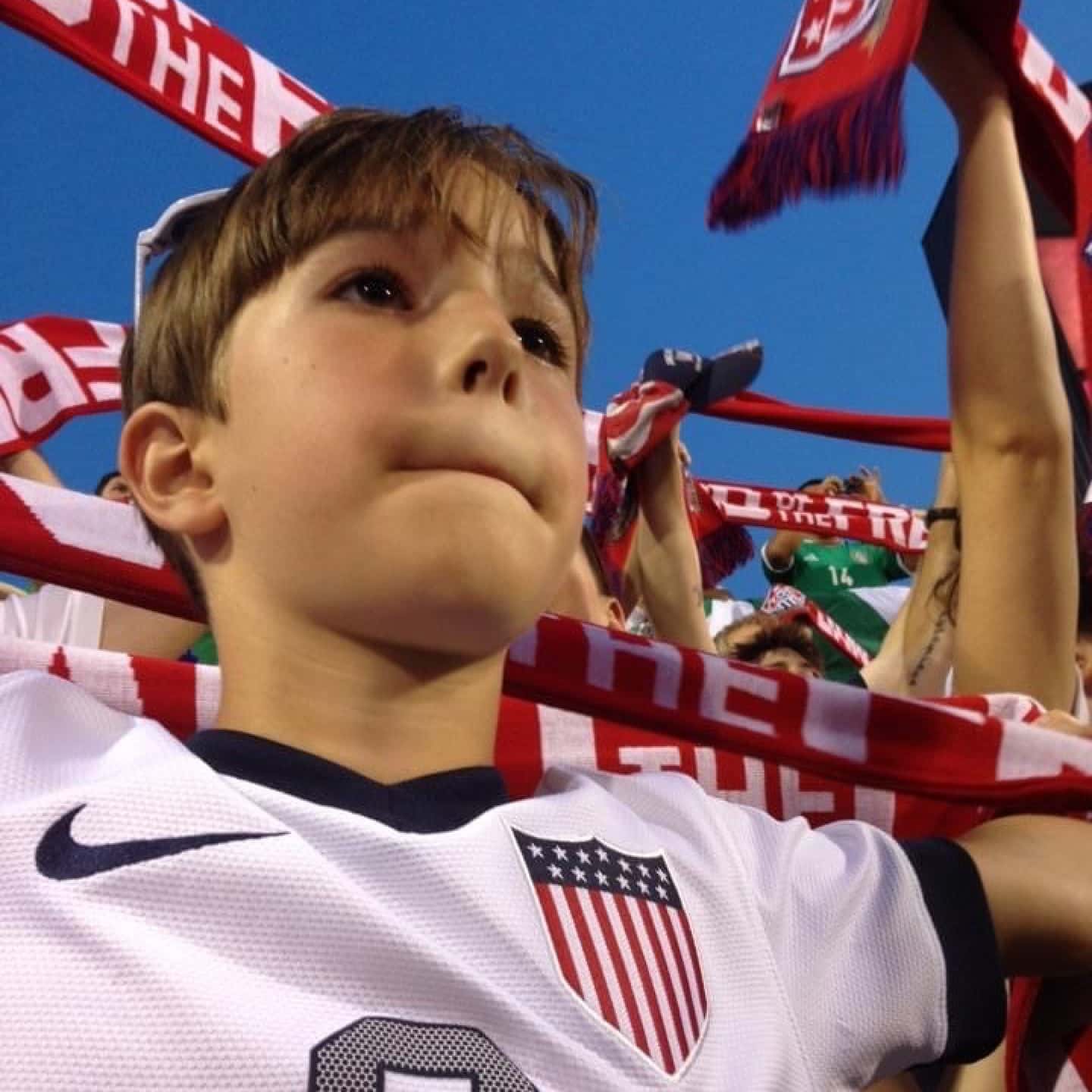 When Ava was six in 2015, the Adams brought her to a USWNT Victory Tour game in Pittsburgh, Pa. on Aug. 15. The USA defeated Costa Rica, 8-0. They had field level seats because Chad wanted to get his daughter close to the action.

"She was really enthralled with the World Cup and the team, and had fallen for Alex Morgan," he said.

During an open practice the day prior to the game, Ava met Kelley O'Hara and Christen Press, among others, but never spoke with Morgan.

A bad ankle sidelined Morgan from the game.

Then the team broke its post-game huddle.

"Alex Morgan just walked straight across the field … and starts signing autographs," Chad said. "Within five minutes here she is, looking eye-to-eye with Ava. That day Alex became her absolute soccer hero. Alex grabs her. She picks her up over the boards and says, 'You're so cute,' puts her arm around her. We got wonderful pictures. That was just such a moment for her. She has become completely obsessed with the game. She works on it daily like Ashton. She is so connected to the U.S. women, which is an absolute joy." 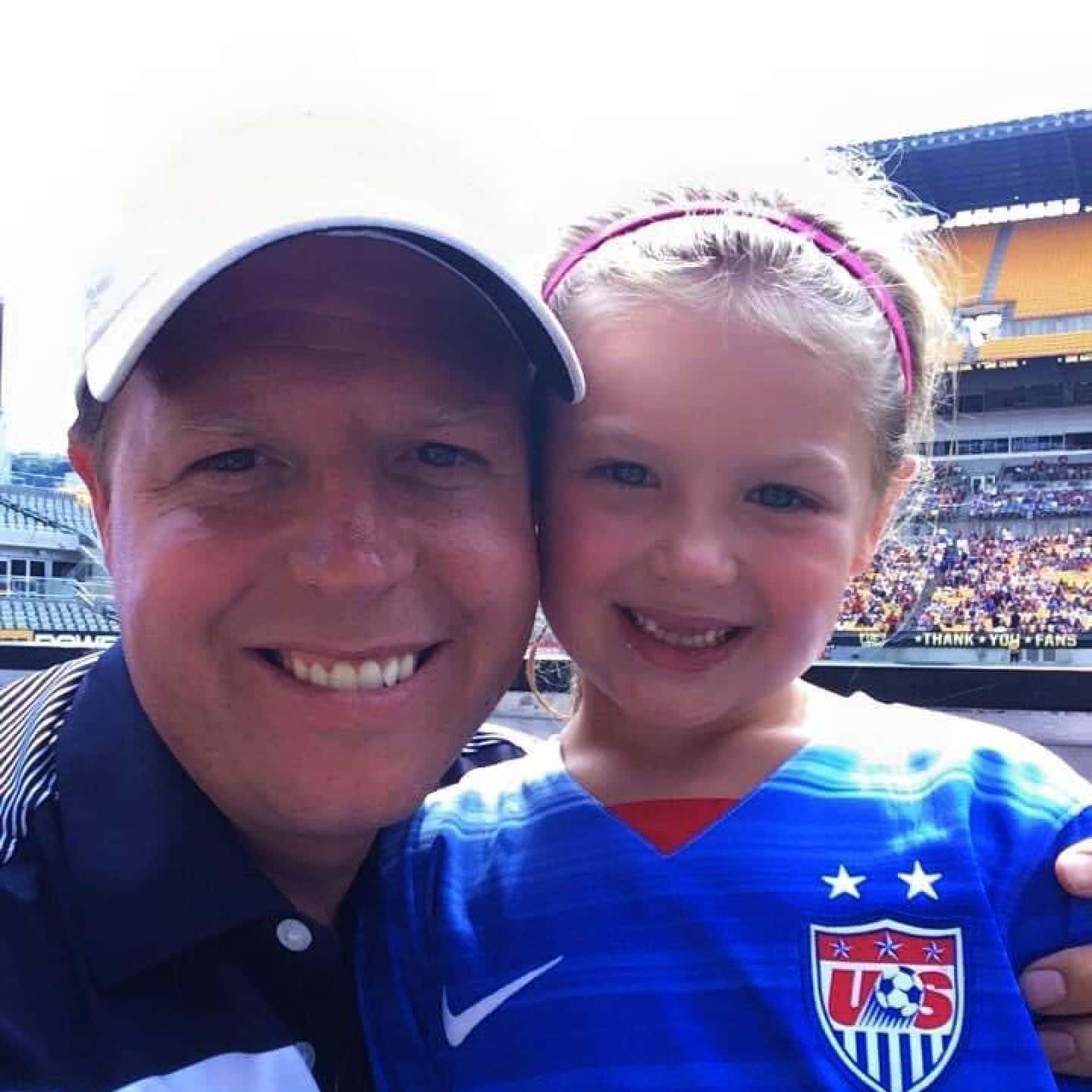 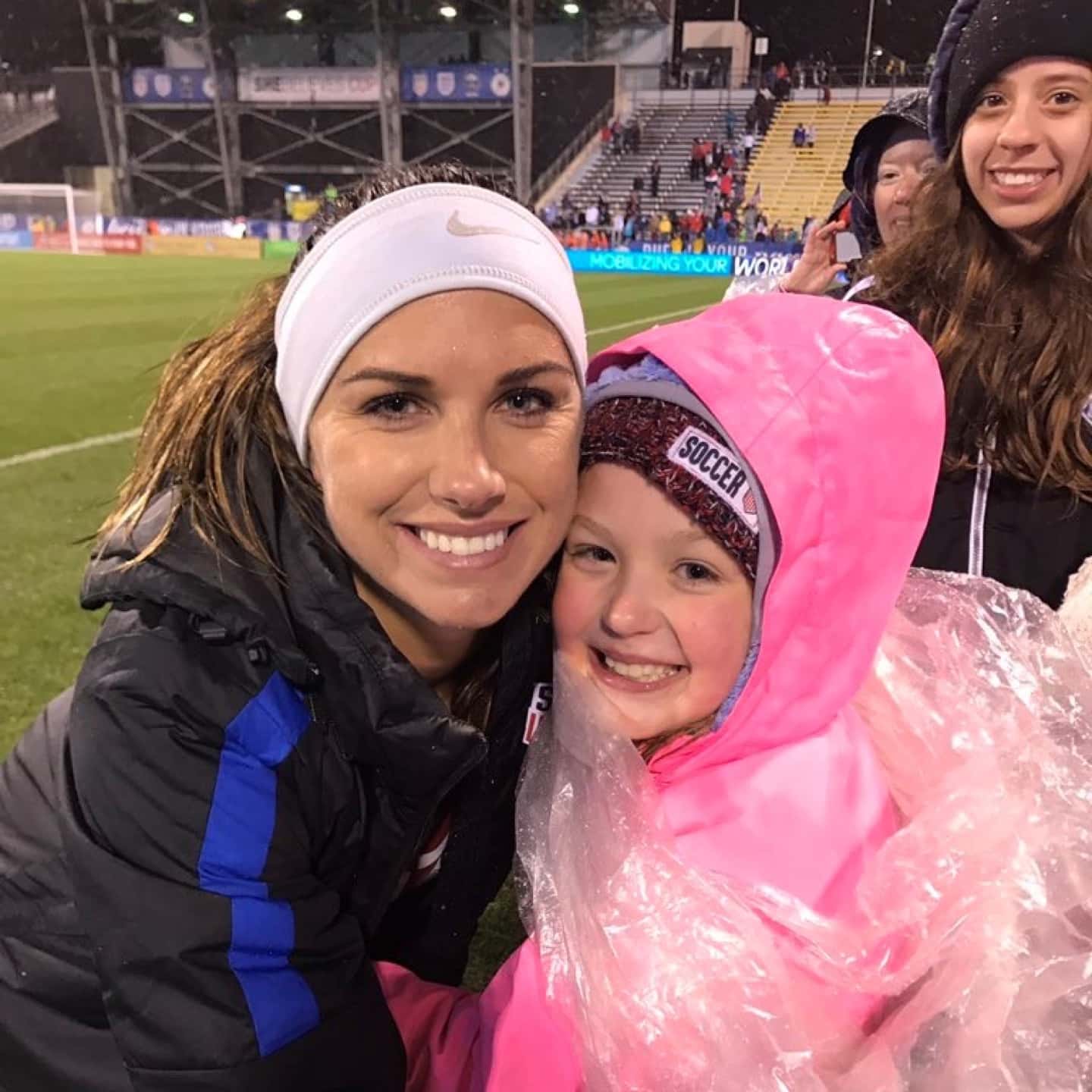 Like many families, the COVID-19 pandemic has forced the Adams to change their plans, think hard and make difficult decisions.

At first, it was welcomed, giving the busy family a rare opportunity to be in one place.

"It has provided some incredible family time," Chad said. "When everything started shutting down in late March and early April, we went from a family as being in all different places every night of the week to be a family that was together for months. For a really busy family that was a welcome pause. It was a chance to reconnect and be together around the dinner table."

But there were some frightening times.

When Beckham was six weeks old, the Adams experienced a giant scare while visiting Florida for a soccer showcase as they almost lost their youngest son to a respiratory virus. Beckham spent six days on oxygen in the ICU at Arnold Palmer Children's Hospital.

"We didn't know if it was COVID," Chad said. "When you go through that and you have real moments, you take this really seriously. We really locked down."

Nine months can take its wear and tear in many ways. For the kids, there were no training sessions, games, tryouts or tournaments or being around friends and teammates. It was trying, especially for Ashton, who is looking ahead to college. He needs to be seen by coaches in person or via video, which is vital.

"We felt like Ashton in particular was having a tough time just kind of being down in the dumps," Chad said. "We've realized just how much soccer - playing and practicing - how important that is for his mental well-being."

So, the Adams must perform a delicate balancing act between the sport and keeping everyone healthy.

"We have a really hard time with these decisions," Chad said. "Do we go because that's what's good for Ashton, or do we just play everything super safe and stay home because we know the greater good of the family is protected? For families like us, it's put us in really hard decision-making positions that are really stressful.

"People want to continue playing. I get that. If I knew everything was going to be fine, we'd absolutely go to everything. It's become a case-by-case decision, the geography of the event, and the COVID rate in-and-around the area. The pandemic has taught us or emphasized how important soccer really is to them." 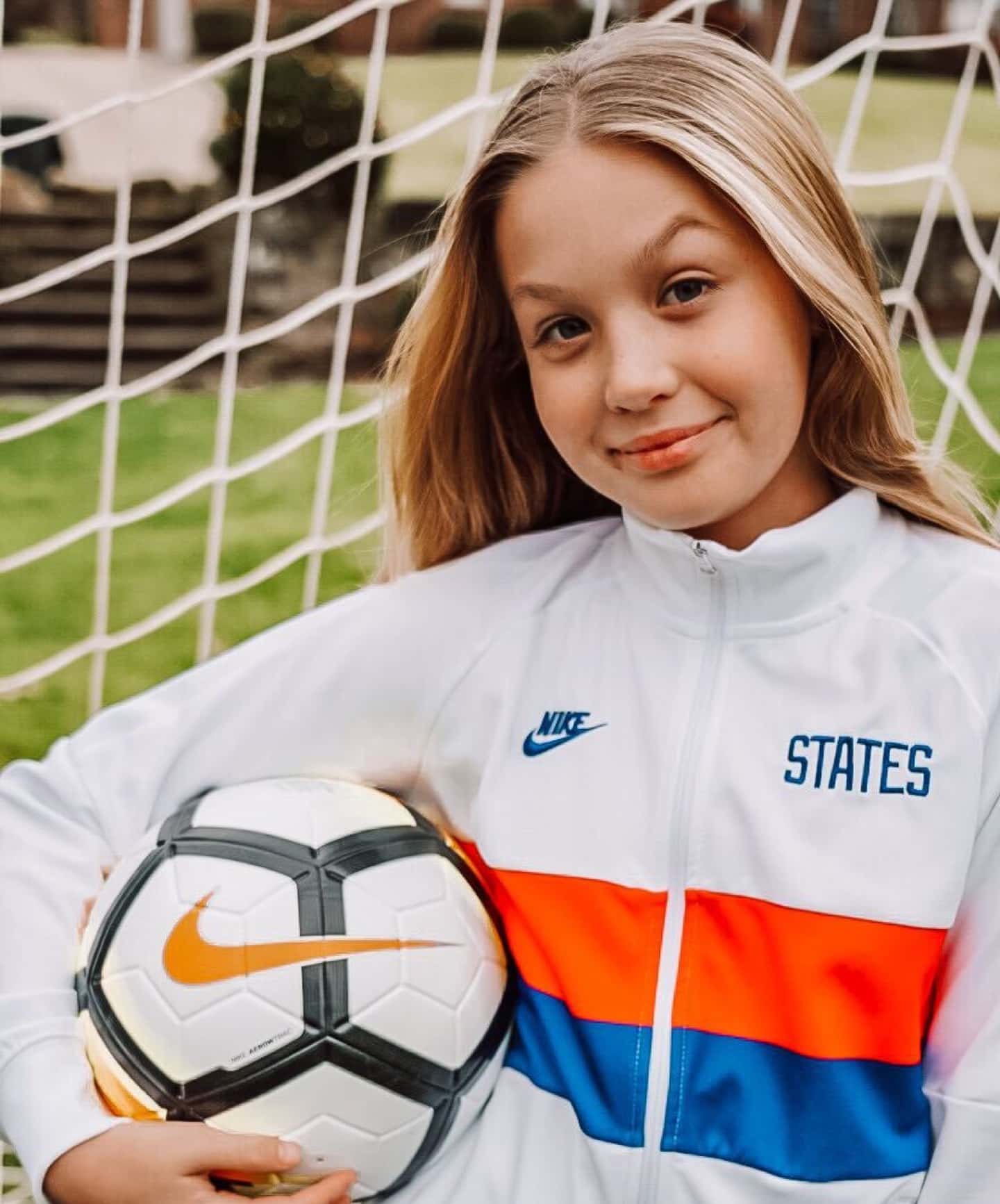 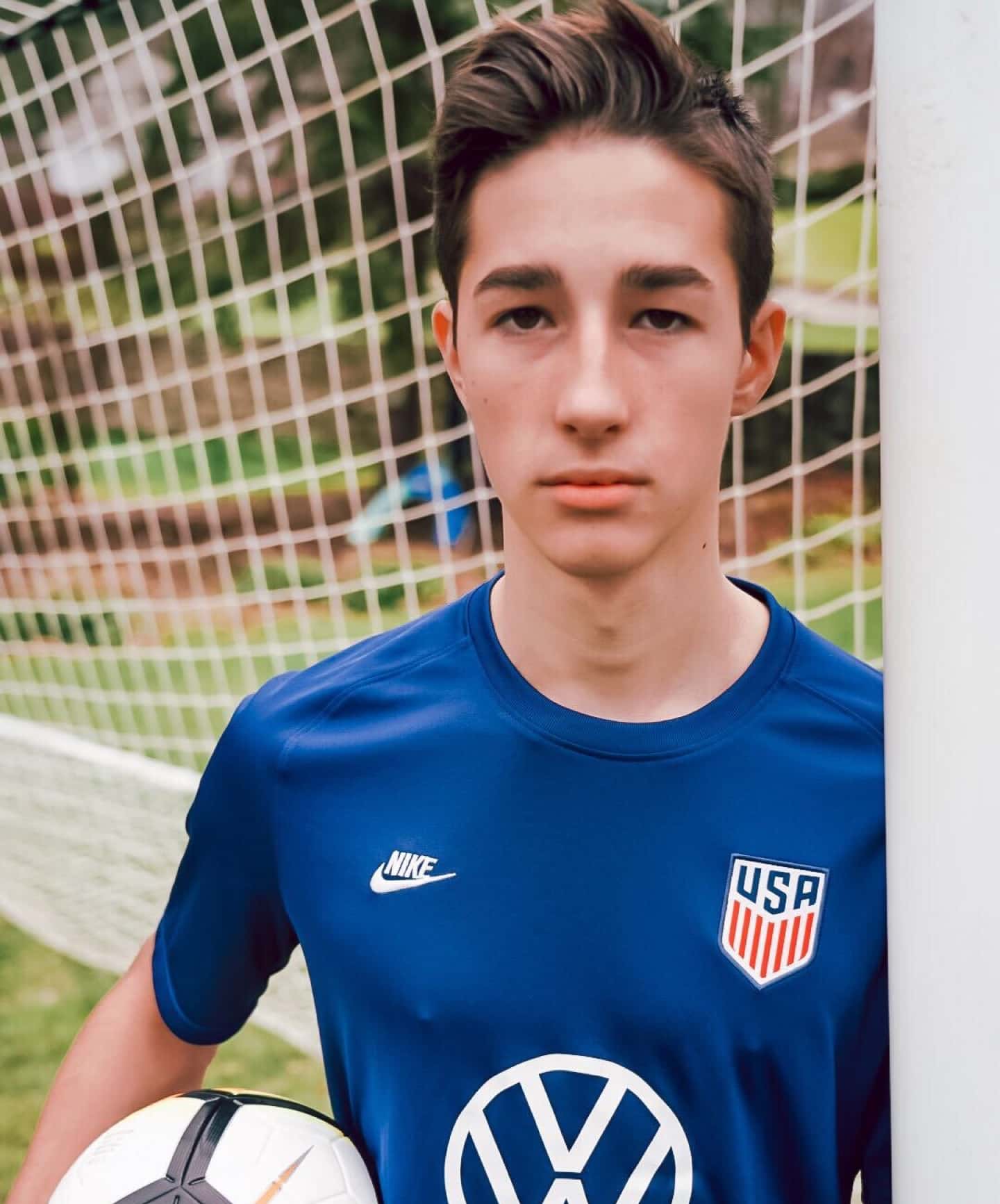 With the promise of vaccines and what probably will be new normal, 2021 can't come soon enough.

"We are very excited for when fear can be removed [from] the decision making," Chad said. "Fear has hovered over every decision we've made because we want to protect our family and those our family comes into contact with. I'm really excited about the thought of getting my kids to professional games, USWNT or USMNT training or games and allowing them to be in the stadium. That is just the biggest lessons in all of this, which was I didn't even realize how much I took for granted until it's all taken away." 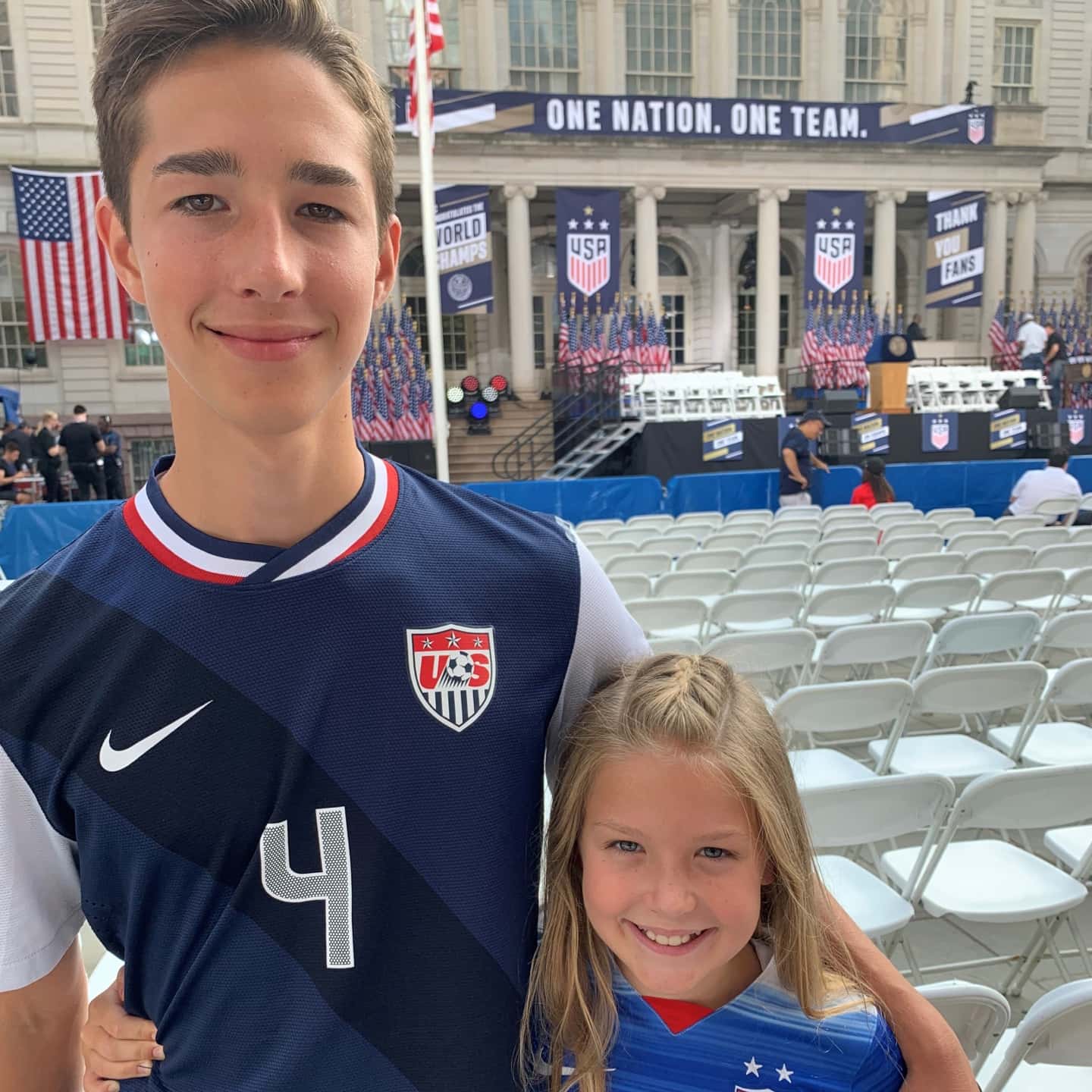 "That's why sports are so neat," he said. "You can take your family to a U.S. women's game, enjoy every minute of it, enjoy the car ride there in anticipation of how they're going to play, who you might see. Can you get a players’ attention? I can't wait for those moments again."