Midfielder Brenden Aaronson certainly did his best in helping Red Bull Salzburg to win the ÖFB Cup Final competition, connecting for the second goal in a 3-0 triumph against LASK at Venue Worthersee Stadion on Saturday. It was Salzburg’s third-consecutive Austrian Cup title and sixth in seven seasons.

Because it was so nice, here's another look at that strike from Brenden Aaronson in yesterday's 🇦🇹🏆 Final.

With Salzburg leading, 1-0, Aaronson gave the Austrian giants some breathing room in the 66th minute. Culminating a quick counterattack, the 20-year-old collected a pass from Enock Mwepu and fired a laser into the upper right corner from the top of the box. The goal was the 20-year-old attacker’s fifth of the season across all competitions and second in the cup.

Salzburg is directed by former USMNT midfielder and assistant coach Jesse Marsch who will take over the RB Leipzig coaching reins for the 2021-22 Bundesliga season. 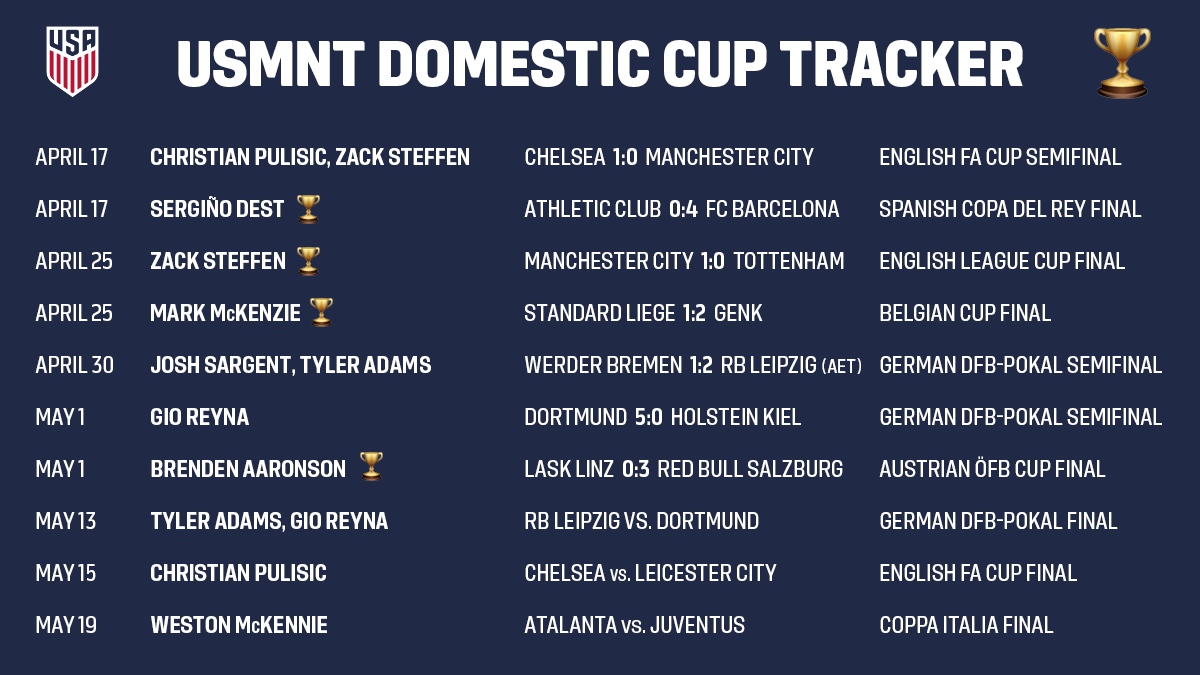 That goes along with Jordan Siebatcheu clinching the Swiss Super League with BSC Young Boys last month and Weston McKennie helping Juventus to the Italian Super Cup in January.

The DFB-Pokal final will showcase two USMNT teammates on May 13.

During a season of milestones and firsts with Borussia Dortmund, Reyna achieved another as he recorded for his first professional brace in a 5-0 home victory over Holstein Kiel semifinals on Saturday.

Reyna pulled off his heroics within a six-minute span in the opening half. He tallied his first goal in the 16th minute, firing home a Jadon Sancho feed from 16 yards. In the 22nd minute, he tapped in Raphael Guerreiro's deflected back-heel pass for a 2-0 advantage. Reyna, who has seven goals across all competitions this season, didn't get an opportunity for a hat-trick as he was subbed out at halftime.

The 18-year-old became the second USMNT player to score in a DFB-Pokal Semifinal, following Thomas Dooley who did so with Kaiserslautern in 1990. Dortmund also became the first team to tally five goals in a DFB-Pokal semifinal.

In a confrontation of USMNT teammates' sides on Friday, RB Leipzig (Tyler Adams) prevailed over host Werder Bremen (Josh Sargent) in extratime, 2-1. Sargent, who went the entire 120 minutes, had a golden opportunity to lift his team into the lead on the half hour, sent a point-blank shot wide right.

IN OTHER NEWS OF NOTE

After scoring the Blues' lone goal in their 1-1 draw at Real Madrid in the first leg of the UEFA Champions League semifinal last Tuesday, Christian Pulisic never got off the bench in Chelsea's 2-0 home win over USMNT teammate Antonee Robinson and Fulham on Saturday. Holding the away goal, Chelsea host Real Madrid in the decisive semifinal second leg on Wednesday (3 p.m. ET; Univision, TUDN, CBS Sports Network, Paramount+).

ICE IN HIS VEINS.

Weston McKennie and Juventus jumped from fifth to third place in Italy's Serie A behind a 2-1 win at Udinese. The American midfielder played 84 minutes as Ronaldo struck for two late goals to secure the three points. McKennie (22 years, 247 days) became the youngest USMNT player to reach 30 appearances in one Serie A season, surpassing Michael Bradley (24 years, 182 days) with Chievo in 2011-12.

THE BEST OF MLS

If D.C. United learned anything about Jackson Yueill Saturday, it’s not to let its guard down against the San Jose Earthquakes midfielder, especially late in either half. Yueill struck twice, belting home a first-time volley from outside the box in the 43rd minute to give the hosts a 3-1 advantage and then the final goal in the 85th minute in a 4-1 victory.

New York City FC captain and goalkeeper Sean Johnson registered his second successive clean sheet in a 2-0 win over 10-man Philadelphia Union on Saturday. Johnson hasn't allowed a goal in 270 minutes for NYCFC, which sits in second place in the Eastern Conference.