CHICAGO (May 7, 2015) – Alex Morgan, Christen Press and Abby Wambach have been selected to represent the U.S. Women’s National Team in a collaborative effort between FOX Sports and “The Simpsons” to promote the 2015 FIFA Women’s World Cup through the long-running animated sitcom. The soccer-themed episode of “The Simpsons’ will air on May 10 at 8 p.m. ET on FOX.

“Being able to connect the U.S. Women’s National Team with an iconic brand like THE SIMPSONS to help raise awareness for the Women’s World Cup is really quite an honor,” offered Robert Gottlieb, Executive Vice President, Marketing, FOX Sports. “The Women’s World Cup is going to be a truly cultural event in the U.S. beginning next month, and this partnership with THE SIMPSONS and Gracie Films is one of several examples of how elements of 21st Century Fox have worked together in creative ways to promote this huge tournament.” 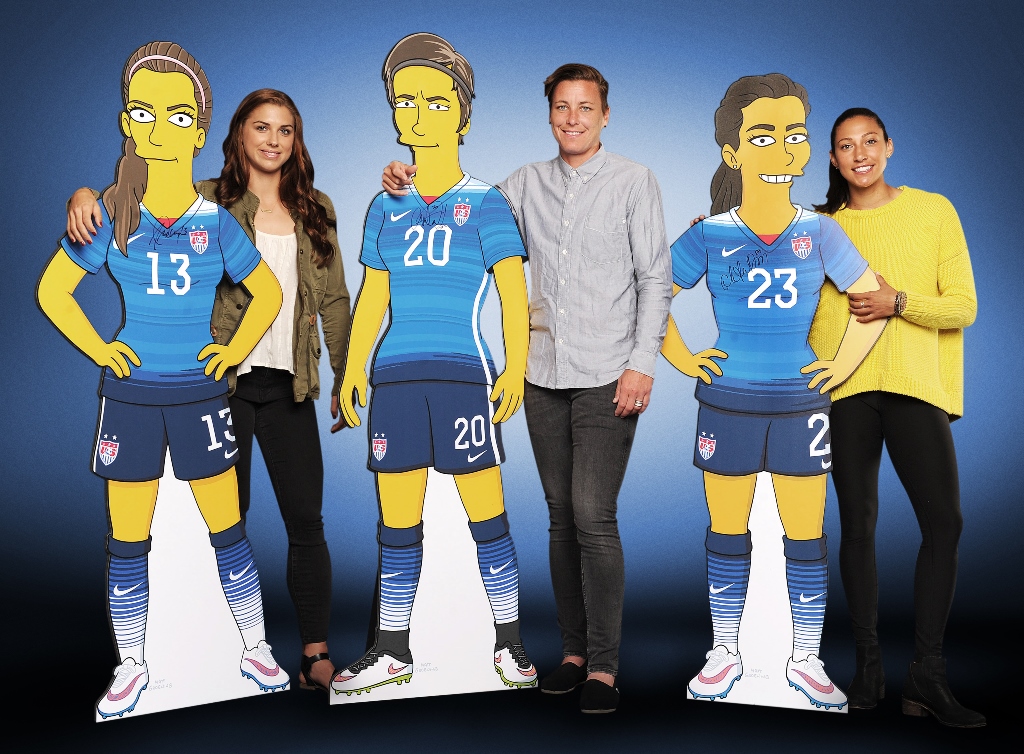 In its first of three Send-Off Series matches in May, the USWNT will face the Republic of Ireland on Sunday, May 10 at Avaya Stadium in San Jose, California. Live coverage will begin at 2 p.m. ET on FOX Sports 1. Fans attending the match will have the opportunity to have their pictures taken with the Morgan, Press and Wambach “Simpsonized” standees in a customized photo booth, and then upload the images to a social media account.

The U.S. WNT will face Australia, Nigeria and Sweden in Group D at the FIFA Women’s World Cup. The USA opens against Australia on June 8 at Winnipeg Stadium, followed by Sweden on June 12 in Winnipeg and Nigeria on June 16 at BC Place in Vancouver.

The longest-running scripted show in television history, THE SIMPSONS exploded into a cultural phenomenon in 1990 and has remained one of the most groundbreaking and innovative entertainment franchises, recognizable throughout the world. Currently airing its record-breaking 26th season and in production on their 27th season, the show has won 31 Emmy Awards, a 2015 People’s Choice Award and was nominated for an Academy Award in 2012 for the theatrical short The Longest Daycare. The Simpsons Movie was a hit feature film, their mega-attraction The Simpsons Ride at Universal Studios has received historic expansion updates with the addition of ‘Springfield’ and the show was honored with a Star on the Hollywood Walk of Fame in 2000. It has been named the “Best Show of the 20th Century” by Time Magazine, and called the "Greatest American Sitcom" by Entertainment Weekly in 2013.

THE SIMPSONS is a Gracie Films Production in association with 20th Century Fox Television. James L. Brooks, Matt Groening, and Al Jean are the Executive Producers. The Gracie Films Worldwide Brand Division develops and produces the licensed content for the series. Film Roman, a Starz Company, is the animation house.