Six-year-old Whitney Engen watched Kerri Strug’s final vault during the 1996 Olympics and decided there and then that she was going to be a gymnast. Fully absorbed in her gymnast aspirations, Engen had no intention of playing soccer.

“But my Mom and Dad basically said, ‘Sorry, you have to do this, you gotta play two sports a year’ – I think they just did that because I was such an active kid that they just wanted me to be tired before bed,” laughs Engen.

While she didn’t care much for the game itself, she did like the rituals surrounding it: 1) She got candy after every practice, and 2) When her dad drove her to the game in his old diesel Mercedes, he blasted opera music as they wound up the hill toward the field. They both jokingly sang along, car-rattle helping their operatic vibrato. 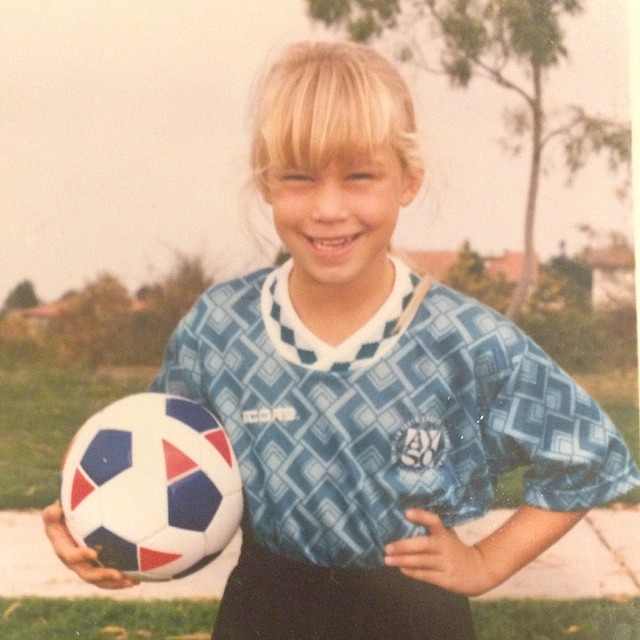 Engen in her early days as a soccer player

Then, in her third season of gymnastics, she was dismissed from her gym because she was too big.

“I wanted to be a gymnast more than anything in the world,” says Engen. “But when you’re a 5’7, 100-pound third grader, it doesn’t really work out for you. I was a huge, huge kid. I’ve basically been this tall my whole life. I don’t want to say it was traumatizing, but it was definitely impactful. I towered over everyone.”

On the soccer field, things weren’t going much better than gymnastics.

She went to individual training sessions, and she did everything she could to figure out how to break into the team. “I was told by the coach that I wasn’t good enough. I believed it. So I thought, what do I need to do to get on the field? I was willing to do anything.”

While her extra training did not pay off with that team, when Cody Press (U.S. teammate Christen Press’ father) invited her to come and play with his team, she switched teams, played every minute and loved it.

“This experience taught me two things: that it’s good to persist even when you’re not having success, and that I did not want to sit on the bench. I think that’s really where my work ethic came from.”

By high school, Engen and Press both played for Slammers FC, although for different age groups (Engen is 13 months older than Press). Club coach Walid Khoury said, “Their teams trained next to each other and they both got to the field early – crossing, finishing, every day taking shots. And then they’d stay after practice—again, crossing, finishing, and taking shots.”

While Engen was an athletic kid who worked hard and always wanted to win the ball, she describes herself as a “super late bloomer.” 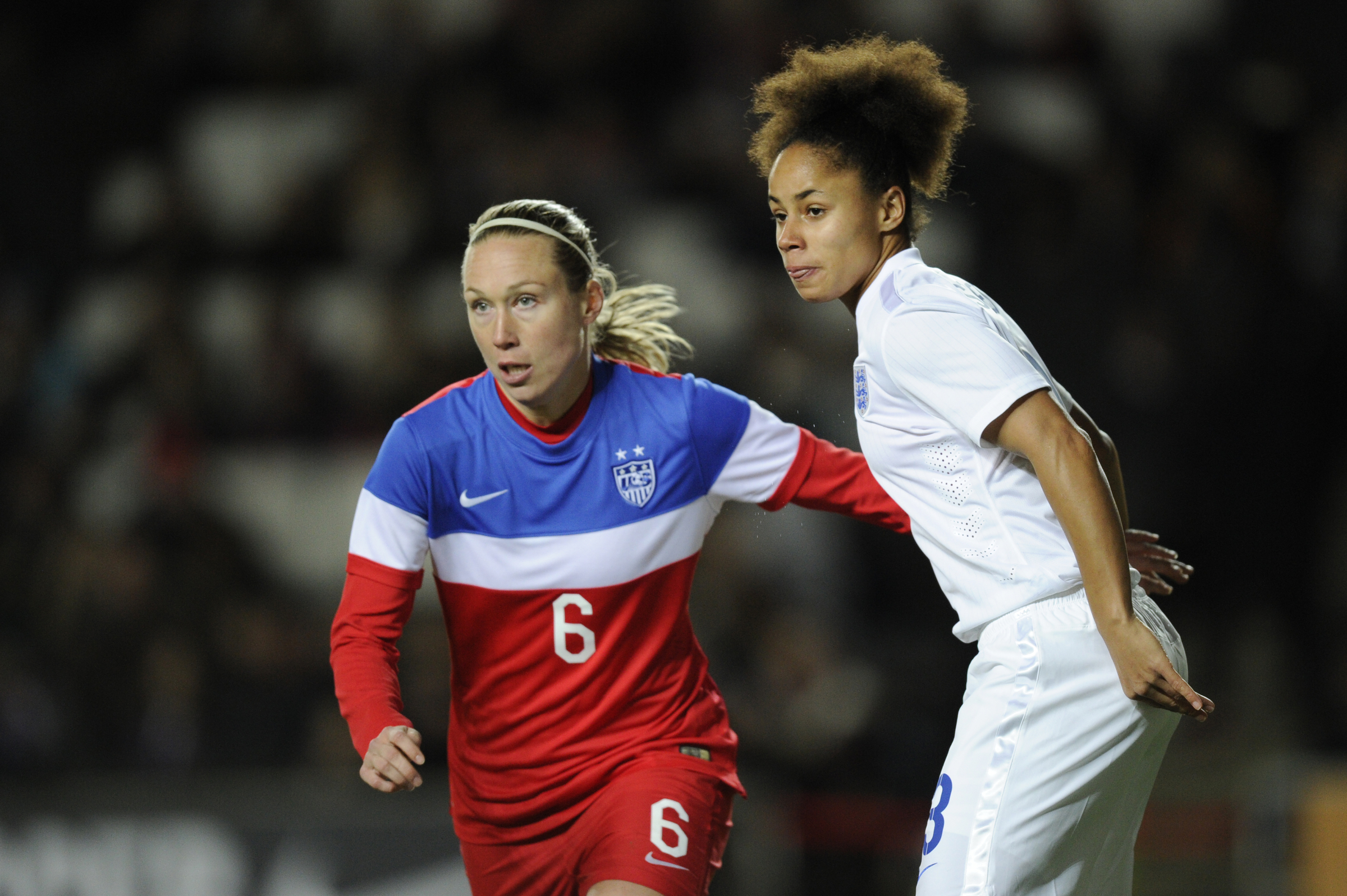 Engen will be participating in her first FIFA Women's World Cup, hoping to help the USA to a third title

She was not on youth national teams and she was not heavily recruited by colleges. “I’d received a couple letters from really small schools but I wasn’t even sure I would play soccer in college,” says Engen. “I wasn’t on the radar.”

However, that would soon change.

Anson Dorrance, head coach at the University of North Carolina-Chapel Hill, the most successful women’s soccer college program in the country, came to a Slammers game during a tournament in Richmond, Virginia. He sat down at a picnic bench a few yards away from a Slammers dad who happened to film every game.

Dorrance recalled watching that game: “I’m there to recruit one of Whitney’s teammates, but I am positively drooling over number twelve,” he said. “And apparently the video camera picks up my audio - Holy crap that kid fights like hell. She’s everywhere. Who the heck is number 12? That is a Tar Heel factor, I want that kid playing for me.”

After the game, the father with the camera told Kim Engen, Whitney Engen’s mother, that Anson Dorrance couldn’t stop talking about her daughter.

When Kim relayed this to Whitney, she didn’t believe it. “I was like, Mom, I don’t really think that’s the case. You always blow things out of proportion, make things bigger than they are. Let’s be honest – I’m not on any youth national teams. Only youth national team players go to Carolina and I’m not one of them. So I dismissed it. I thought it was too good to be true.” 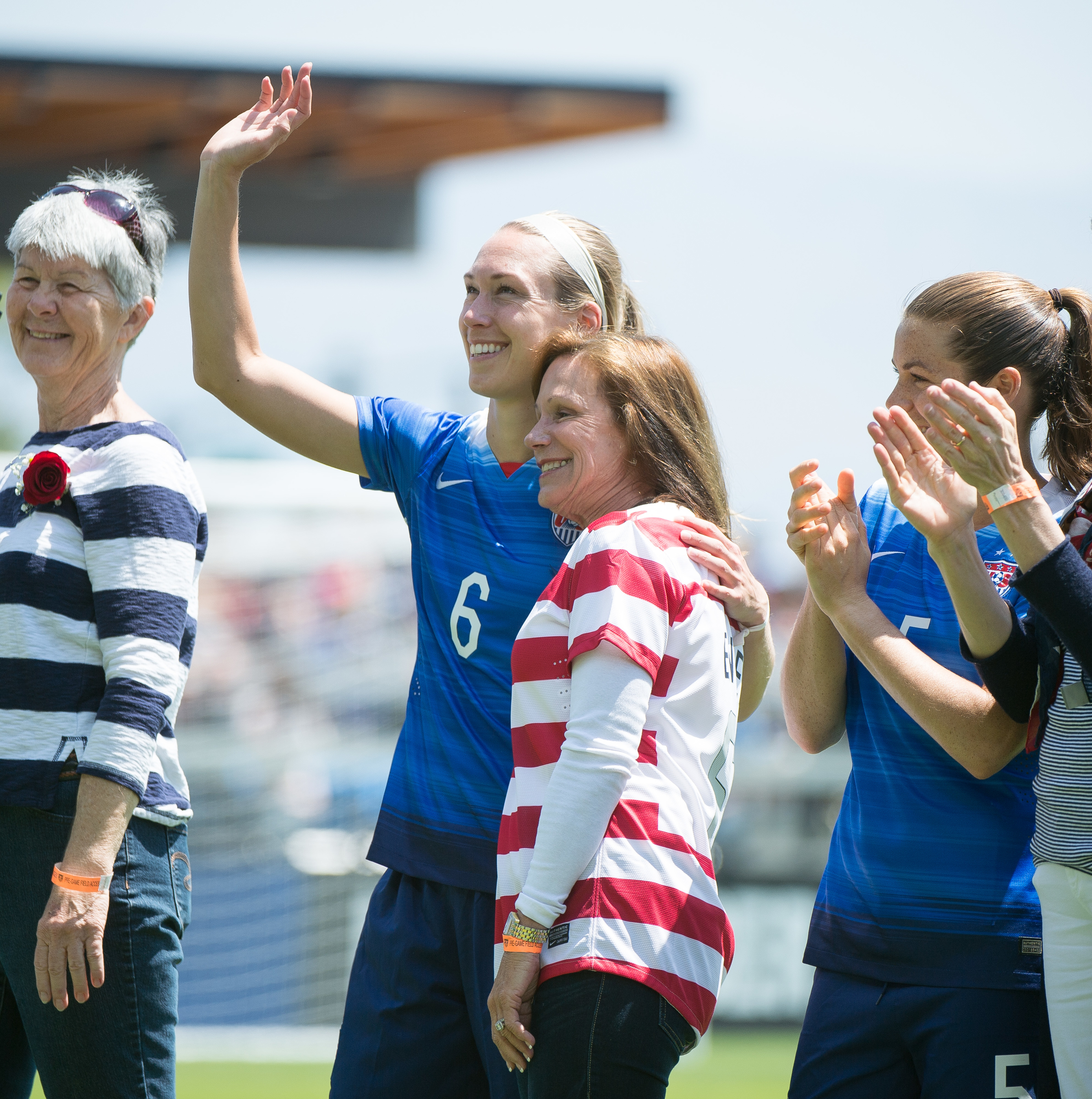 Engen's mom, Kim, was the first person to tell her that UNC wanted her. Pictured above is the pair during the USA-Ireland game on Mother's Day on May 10, 2015

Dorrance watched Engen for the second time a couple months later at the Houston Shootout. This time he approached Walid. Walid pulled her aside and said, “Listen Whit, this is real. Carolina wants you.”

“I was like, ‘You’re crazy. You’re absolutely crazy,’” said Engen.

In September of her junior year of high school she took her first visit to UNC. “I couldn’t believe they were interested in me – I had to go see what it was about,” says Engen.

“North Carolina was really far away and I was a homebody – I’d never even been to sleepaway camp before. But my parents had instilled me that if a door opens that you don’t ever think you’ll ever be able to go through again, you should go through it, no matter what. Because you never know what might be on the other side of the door. I had to go try.”

Club coach Walid went along with her for the unofficial visit and they watched the UNC game together. After the game, Dorrance had given Engen the option of spending the night with two of the players on the team. She had no intention of taking him up on it.

Walid said, “I pulled the car up, popped the trunk, and handed her her bag. She was like, “What are you doing? What are you doing?’ Incredulous, she said, ‘Are you just dropping me here? No way, I’m not staying.’ I said, ‘Well, you don’t have a ride home.’ And then I drove off.”

The following August, the shy kid who rode the bench for her first club team packed up for UNC. Her father handed her a letter – in it he wrote, “You’ve earned the right to step on the field anywhere, with anyone.”

“Ever since that first team, I always had a really difficult time believing I was good enough. Going to UNC– I was like, ‘Why me?’ All these other kids had all these accolades – I did not. I struggled with self-confidence. So my dad’s note meant a lot to me. ” 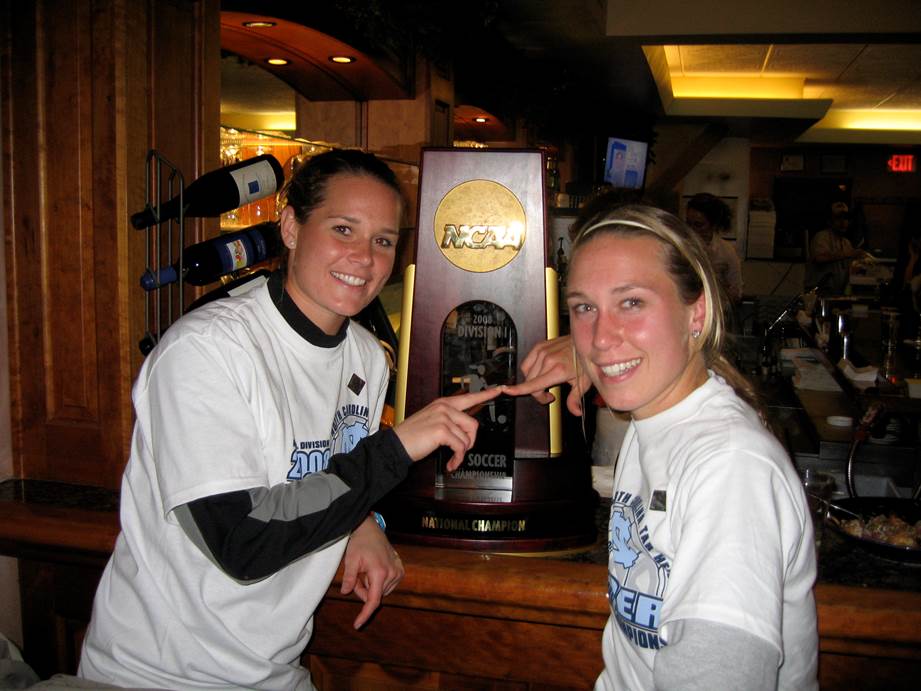 Engen read the letter before each UNC game and she often wrote YETR (You’ve Earned The Right) on her wrist tape—a reminder that she had put in the work, that she did belong.

Her freshman year she started 24 out of 27 games, was tied for second on the team in goals, and won Carolina’s self-explanatory “Gift of Fury” award, not an award usually given to a freshman. She also got her first call up to a youth national team. During her time there, from 2006-09, she was a four year starter and the Tar Heels won the National Championship three out of her four years.

Now, in June 2015, she is a center back for the U.S. Women’s National Team. She will be playing in her first World Cup – alongside Christen Press, her childhood training partner, as well as Meghan Klingenberg and Ashlyn Harris, her college teammates. The letter from her father that she used for inspiration in college is still around – she brings it with her on every national team trip – it’s still her reminder that she’s “earned the right.”