Carli Lloyd scored the game-winning goal against China that qualified the USA for the semifinals of the 2015 FIFA Women’s World Cup. The remarkable finish began with a Julie Johnston service into China’s 18-yard-box. Lloyd elevated over her defender, Zhao Rong, and headed the ball past Chinese goalkeeper Wang Fei and into the back of the net.

What transpired afterward was a slew of raw emotions from the entire U.S. WNT. “I tend to celebrate more in a big setting,” said Lloyd referring to her karate kick of the corner flag. “When the pressure is on and it’s a big goal, you don’t really think about what you’re doing after you score, you just react because you’re so happy.”

Lloyd admits the karate kick was something that had been in the back of her mind for a while. “I’d seen it before.” Lloyd continued, “But you don’t see it often in the women’s game and it was something different than I had ever done. So I did it; it just kind of happened.”

Morgan Brian, the 22-year-old defensive midfielder who played centrally with Lloyd on Friday, had a major role in allowing Lloyd to join the attack more frequently than in the previous four matches for the U.S. WNT. Brian was not directly involved in the goal sequence, but her pure excitement would lead you to think otherwise. 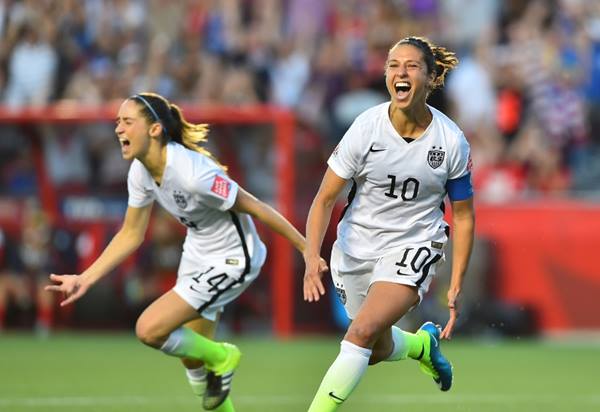 Brian threw her hands up as a huge grin emerged on her face and she ran straight after Lloyd to the corner flag, where they were joined by Amy Rodriguez, Kelley O’Hara, Alex Morgan, Tobin Heath, Meghan Klingenberg and Ali Krieger.

“It’s so funny – you have to watch the film.” Johnston added. “I was jumping up and down and inching towards her and she was doing the same. So I just jumped into her arms.”

“A lot of the time we’ll run up and celebrate with everybody,” Johnston continued. “But, this was special because the defense had something to do with the goal – so we just stayed back, screamed like crazy, jumped up and down and hugged it out.”

The U.S. WNT returns to the pitch tonight to face No. 1 FIFA-ranked Germany in the FIFA Women’s World Cup semifinals at 7 p.m. ET on FOX.