The United States Women’s National Team leads Group D after their first two matches at the 2015 FIFA Women’s World Cup in Canada and most recently played Sweden to a 0-0 draw on Friday night in a meeting between two of the world’s top-five ranked teams.

A key play in the match came from Meghan Klingenberg, who had a goal-line clearance in the 77th minute at Winnipeg Stadium. The 5-foot-2 defender – the shortest player on the U.S. WNT – leapt into action as Sweden’s Caroline Seger, a former club teammate, sent in a volley after a scramble that was headed toward upper right corner.

Klingenberg, stationed on the goal line from the preceding corner kick, positioned herself perfectly and elevated to meet the shot with a game-saving header that saw the ball come inches from crossing the line only to then carom off the crossbar and out of danger. It was Sweden’s only shot on goal during the match.

Klingenberg refused to accept any praise: “I was just doing my job,” she said, when asked about her game-changing heroics afterward.

"I saw it coming but obviously when it's coming through a crowd you never know what's going to happen,” recalled Klingenberg. “It could take a deflection and you kind of have to react as it's coming.”

So, yeah. Just doing her job.

The dramatic intervention proved to be a pivotal moment in preserving the shutout and was featured on SportsCenter’s Top 10 Plays. 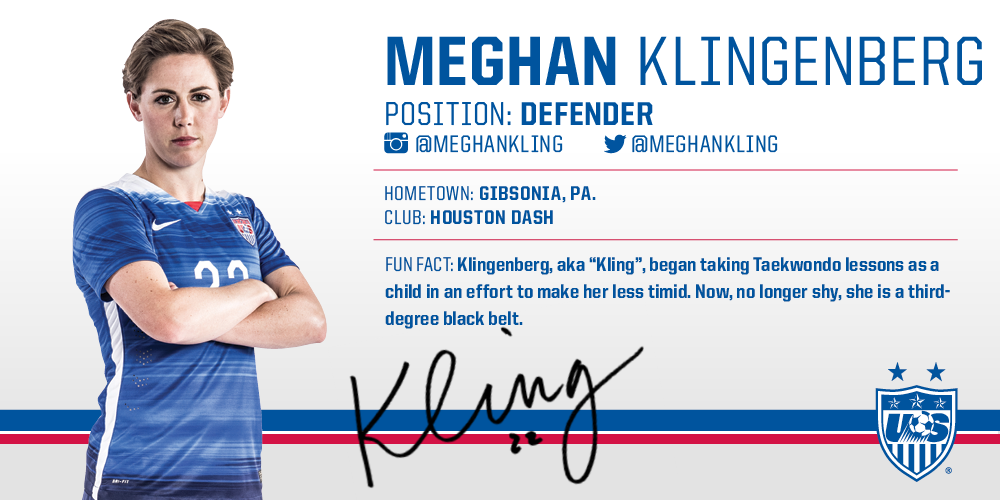 The goal line clearances aside, ‘Kling’ has been doing her job consistently in 2015, appearing in every WNT match this year.

The clutch clearance, reminiscent of Kristine Lilly’s goal-line stop in the 1999 FIFA Women’s World Cup final, leaves the United States in pole position ahead of a decisive group-stage finale against Nigeria on Tuesday in the team’s quest for a third World Cup title.

Sixteen years after Kristine Lilly famously saved the USA's bacon with a headed clearance off the goal line in the 1999 World Cup Final,
Meghan Klingenberg delivered a similarly impressive play to earn the USWNT a result against Sweden in group play of the 2015 edition of the tournament.

Klingenberg vividly remembers watching Lilly’s historic header in 1999, which ultimately sent the USA-China finale into a penalty kick shootout. And in doing so, caused quite the scheduling conflict for the 11-year-old Klingenberg and her best friend because of an ‘NSYNC concert they planned to attend.

The play is of course a vivid memory for Lilly as well. She lists it as the second best moment of her career, behind only the joy of winning a world championship with her teammates.

Thanks to Klingenberg’s quick reactions, and vertical leap, the pursuit of a comparable career moment is still very much on track for her and her teammates.