Her sophomore year at the University of North Carolina-Chapel Hill, Meghan Klingenberg competed in a campus gladiator competition that culminated in a sumo joust: competitors donned big blow-up fat suits and went at each other with giant foam clubs. “Kling insisted that I come watch,” says Anson Dorrance, long-time coach of the famed UNC women’s soccer team. “So there they are - Kling’s up against this monster. I mean, this girl was well over 6 feet tall, and strong as a house. And I’m a little worried about her – she’s a small kid and I’m kind of expecting her to get crushed,” says Dorrance. “But Kling proceeds to beat the tar out of this girl – looks like she’s going to club her to death. No one is hurt because they’re wearing these padded suits and the clubs are foam…but make no mistake, Kling’s aggression is off the chart.”

This wasn’t always the case. While she is now a starting outside back for the United States Women’s National Team, her first year of soccer, she was, in her own words, “by far the worst on the team.” Timid and shy, she didn’t understand the concept of winning the ball. “The coach would be like, ‘We’re going to put in Meghan’ - and everybody would be like, ‘Great, now we’re going to lose.’ I was that bad.” Meghan’s father confirms this: “When she played, her mother and I would try to hide.”

Meghan’s dad’s game plan to combat her timidity was to sign her up for taekwondo lessons. By fifth grade, her shyness was a thing of the past. She was a black belt performing in the school talent show; all the other girls were tap dancing and doing ballet, and there was Kling - putting on a nunchucks and board-breaking performance to *NSYNC. In high school, she gave up taekwondo in order to throw all her focus into soccer, but taekwondo still left its imprint: best friend and UNC teammate Monica Welsh-Loveman recalls the tail end of Halloween, when Kling, dressed up as a baboon, went up and down fraternity row high kicking jack-o-lanterns. 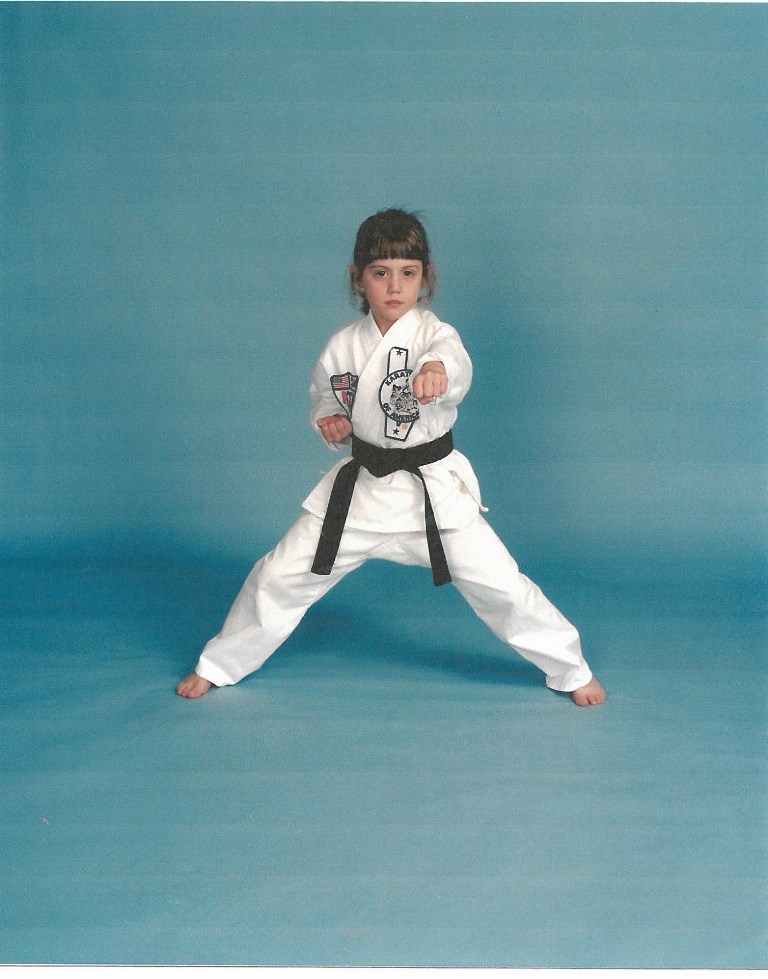 A young Meghan Klingenberg achieved black belt status in taekwondo by the time she was in fifth grade.

Beyond the occasional karate-kicking spree, taekwondo instilled a general boldness -- a willingness to go for it. This quality is perhaps best illustrated by her approach to Late Night with Roy, a Midnight-Madness style party that kicks off the UNC basketball season. “At Carolina, Late Night with Roy is an institution,” says Kling. “I wanted to go – but there’s a huge line to get in and as a soccer player, with practice, you just don’t have time for that.” So Kling enlisted a friend, found a clipboard, and put on an official-looking UNC polo shirt. She printed out signs that said RESERVED FOR WOMEN'S SOCCER TEAM, got rope, and just walked by everyone in line. She waved and nodded to the security guy, went right out to the court, and roped off a row of chairs. When the whole UNC soccer team showed up at start time, the ushers guided them straight to their seats – “Excuse me, excuse me, women’s soccer coming through.”

Kling tried this same tactic again the next year, only this time, just as she was taping on the RESERVED signs, Roy Williams’ personal assistant showed up “Excuse me,” she asked. “Who are you?”

“We just froze,” says Kling. “’My friend said, ‘Anson Dorrance talked to Roy Williams. He gave us permission.’ So the lady calls up Roy right while we’re standing there. I think we’re done for, I think we’re getting expelled. But she hung up the phone all apologetic and says, ‘Maybe Anson forgot to call?’ We start talking about how scatterbrained Anson is, and somehow we still end up with courtside seats.”

Her audacity also shows up on the field. At 5’2”, she may be the smallest on the field, but as Dorrance puts it, “She’s an absolute street fighter.” 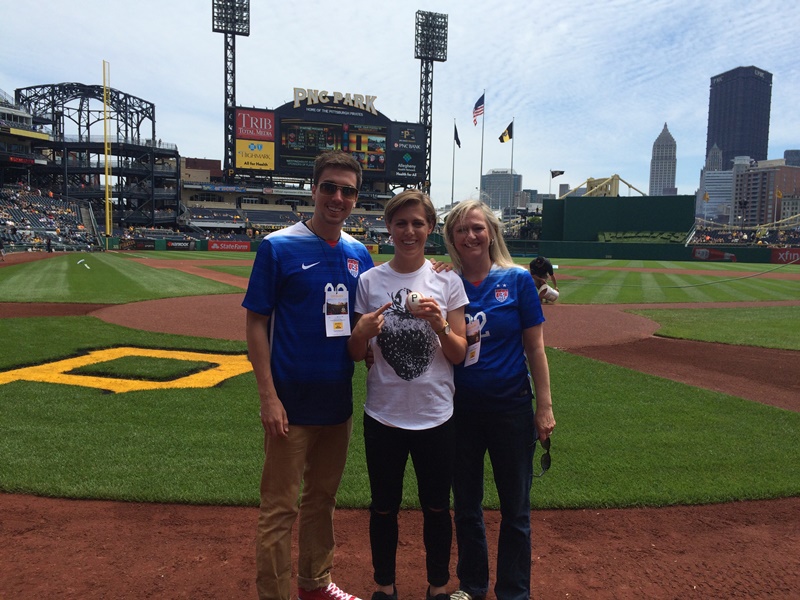 Klingenberg threw out the first pitch at a Pittsburgh Pirates game during the USWNT's Community Week
in advance of this summer's FIFA World Cup in Canada. Her brother and mom were there to cheer her on at PNC Park.

Part of this was honed in daily basement duels with her younger brother, now a rising senior on the men’s soccer team at Penn State. Kling can’t remember a single game where her parents didn’t have to step in and break them up. “The battles were so good for us because it prepared me for everything else. I was competitive, which made him competitive, which made me more competitive – it was just kind of this cycle. I wouldn’t do anything without trying to be the best– kicking a stone, walking down the street, having a better handshake than someone else.”

This take-no-prisoners mindset developed in part from watching her favorite player, Michelle Akers, who, ironically, was the tallest player on the field at 5’11”. “She was instantly recognizable – her hair, her height, the way she played. I loved the way she carried herself. She looked at everyone, like, I don’t care who you are, I’m going to destroy you. That was the coolest thing,” says Kling. “I may be kind of a little person, 122 pounds. People would tell me, ‘you’re too small,’ but if you have that kind of mentality, it doesn’t matter how small you are.”

Since Kling made her national team debut in 2011, she has defended with flair. In the games leading up to the World Cup, she scored two breathtaking goals. Since the opening match of group play in Canada, she’s exhibited an Akers-esque mentality, stripping the ball off opposing forwards and attacking up the wing. Against Sweden, the 5’2” defender got airborne, making a leaping goal-line clearance with her head, saving the USWNT from defeat. Klingenberg continues to be the kind of player who never stops competing and never ceases striving to be the best. As she says in her “One Nation. One Team. 23 Stories.” introduction, she’s looking to win the World Cup, “to bring the trophy home to the United States.”

Kling was further inspired by the stars at Barcelona FC: “Iniesta, Xavi, Messi – they were all tiny. And they were the best in the world, dominating. I always knew that I could do it, but it was reinforcement – you can be small, and not only can you be the best in the world, but you can do it in style.”
Tags
WNT
Havana Solaun
2015 FIFA Womens World Cup
U.S. WNT vs. Colombia - 06/22/2015