Tonight, the U.S. Women’s National Team squares off against Colombia in the Round of 16 at the 2015 FIFA Women’s World Cup.

Coincidentally, the game falls on the 21st anniversary of the U.S. Men’s National Team historic win against Colombia at the 1994 FIFA World Cup in the United States.

On that night of June 22, 1994, midfielder Earnie Stewart tucked in the game-winning goal to lead the USA to a 2-1 victory. With the win, along with the team’s draw against Switzerland, the U.S. was able to reach the knockout round of the tournament for the first time in 60 years.

Through the dogged efforts of the U.S. players, and particularly the defensive efforts of captain Tony Meola, Alexi Lalas and Marcelo Balboa, the team was able to upset one of the dark horse candidates to win the tournament in front of 93,000 fans at the Rose Bowl in Pasadena, Calif. Balboa nearly added to triumph with a spectacular bicycle kick effort from a corner that missed the Colombia net by mere inches. The USA’s other goal came on an own goal from Andrés Escobar, who was tragically killed in the aftermath of the game.

When the match ended and the U.S. nabbed the victory, the stadium erupted with jubilation. Balboa recalls the moment fondly, “We celebrated – and if you go back to that game – there’s flags wrapped around players. We’re doing victory laps. We won the World Cup that day, that’s what it felt like.” Later the u 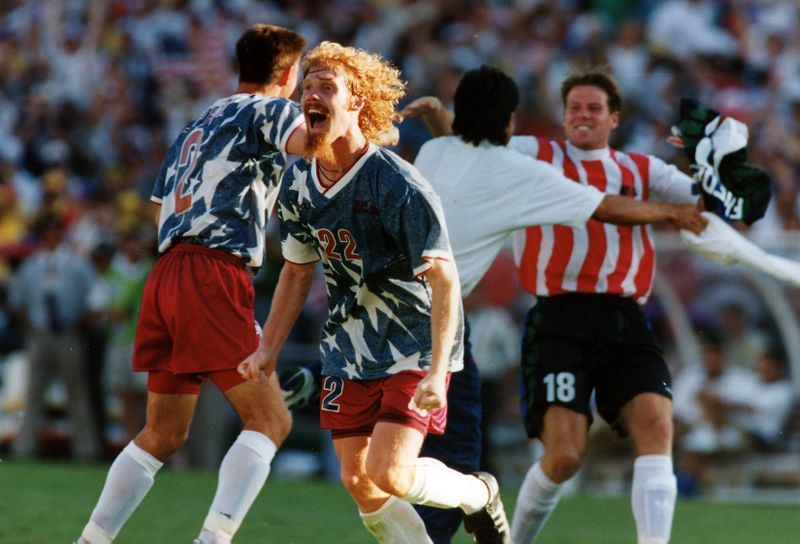 The performance by the United States and the success of the tournament overall marked a new era for the sport in this country. For players dreaming to wear the red, white, and blue, the win was an experience they would never forget.

“I watched a ton of games during that World Cup and the tournament in 1990 as well,” remembers former U.S. defender Eddie Pope. “I can picture Earnie scoring that goal, and I remember thinking what a great moment it was for the U.S. team."

Tonight, it will be the USWNT’s turn to take on Colombia, and the team will be playing to make sure a U.S. win on the world’s biggest stage is once again the outcome.