No player on the current U.S. roster has had as long of a gap between CONCACAF Gold Cup tournaments as defender Brad Evans. And after last summer, there was no guarantee it would ever come to pass.

In May 2014, he was one of 30 players named to the team’s preliminary World Cup roster, but was eventually edged out when the final 23 was named.

No doubt disappointed to have contributed to the qualifying efforts and come so close to a World Cup only to miss it, Evans has earned a new chance with the National Team at this summer’s Gold Cup. Along with Joe Corona, he’s one of two players on the current roster that were the final cuts for last summer’s FIFA World Cup.

“To be back in the picture is great,” Evans said. ”You never know when your time is going to be up with this team. In the grand scheme of things, it’s so short for most players. It’s maybe 20-25 games. You get the odd players that have built a career around it that get 100 caps, or 75 games, but for most players it’s really short. You have to learn to relish it so that when your chance comes again, make sure that you do whatever it takes to stay in the fold.” 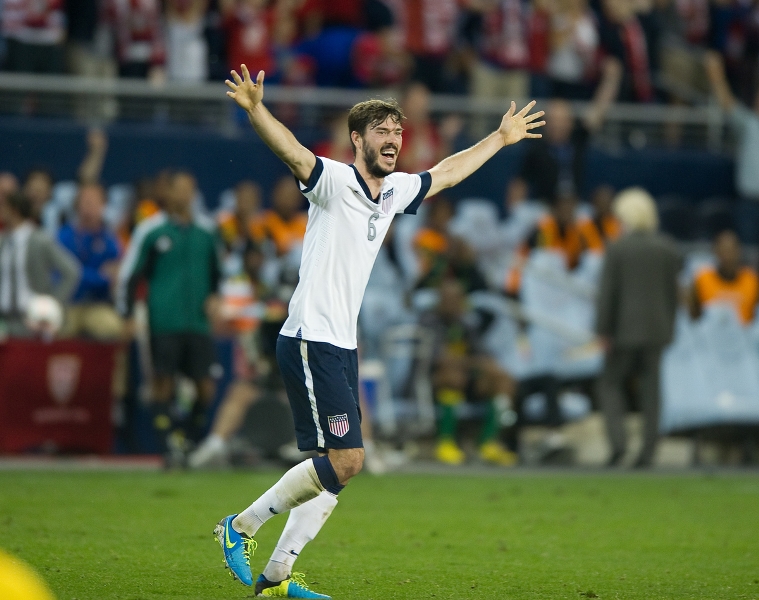 Brad Evans has found plenty of success with the USMNT against Jamaica in the past and
will hope to contribute in another big game against the Reggae Boyz in the 2015 Gold Cup Semifinals.

Evans began his National Team career at age 25, already a third-year pro when he received his first call-up playing under Bob Bradley at the 2009 Gold Cup. Because of the team’s involvement in the FIFA Confederations Cup weeks before, the team was more patchwork than what would normally be sent to a regional championship.

“It was different, mostly MLS guys and guys that were truly fighting for their lives to claw their way into the National Team picture,” Evans told ussoccer.com.

Evans appeared in three of the team’s six matches and came on as a substitute in a 2-1 extra time win against Panama in the tournament’s quarterfinals. Ultimately, the team made its way to the final, but was overmatched by a stronger Mexico side in the final at Giants Stadium.

“It was a team that fought hard, got a couple overtime results, and we found ourselves in a good position in the final. We make a couple errors; you don’t finish your chances – it’s something I look back on and I’d like to forget. The reality is, you learn from your mistakes.”

After gaining more experience with his club side Seattle Sounders FC, Evans started to earn more regular call-ups under U.S. head coach Jurgen Klinsmann, carving out a role with the team in key final round World Cup qualifiers in 2013.

The right back’s best moment came in a June qualifier that year against Wednesday’s opponent, Jamaica. Following a 30th minute goal from Jozy Altidore, the U.S. clung to a 1-0 lead for much of the match until Jamaica’s Jermaine Beckford headed home an equalizer in the 89th minute.

Just as it looked like the U.S. would have to settle for a 1-1 draw, Michael Bradley drove to the endline and centered for Evans in the box. The Sounders FC man turned on a dime and poked an effort inside the opposite post in the 92nd minute to give the team a 2-1 win. 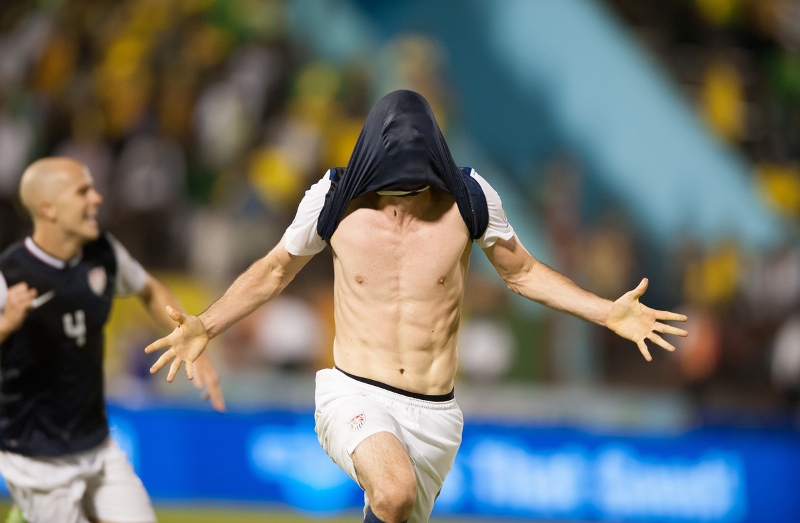 Brad Evans celebrates his last-gasp winner on the road against Jamaica in 2013 World Cup Qualifying.

“I have very fond memories of that game. The whole experience was one I’ll remember forever. Certain firsts you remember. Your first cap and first goal is something you always remember. Especially playing defense, it’s a little bit unheard of, for me it’s something that is a definite highlight of my career.”

The Jamaica game was one of five appearances for Evans during the 2013 ‘Hex’ and kept him in the mix for the team’s World Cup roster the following spring.

Now as he preps for the possibility of facing Jamaica in Wednesday’s semifinal, he’ll lean on the experience gained from that qualifier in Kingston, as well as the return leg the U.S. won 2-0 in Kansas City four months later.

“Those types of performances, results in those big games and big environments against very good teams have an impact. In the back of your mind you always know you can do it,” he said. “It gives you confidence going forward that you can do it.

“I remember the game against Bosnia as well that we ended up winning. I came off the field and Jurgen said, ‘This is it, you can do it, this is the level you’re performing at.’ That’s something I’ve always remembered since then, whenever someone doubts or I start to doubt myself – just knowing past performances have put me to where I am now. Knowing I have those in the back of my mind is something I can carry forward.”