The curtain comes down on the 2016 domestic soccer calendar this Saturday when Toronto FC take on Seattle Sounders FC in the 21st edition of M.L.S. Cup (8 p.m. ET – FOX, UniMas). While Jozy Altidore, Michael Bradley and Jordan Morris will provide plenty of intrigue for U.S. Men’s National Team fans, there’s a lot more to digest ahead of Saturday’s league championship match.

Saturday’s M.L.S. Cup Final is the 21st in league history. While the M.L.S. Cup Playoffs have taken different formats through the years, the final has generally pitted the champions of the Eastern and Western Conferences against each other for the right to be crowned champions.

Back in 1996, D.C. United lifted the inaugural trophy, defeating LA Galaxy 3-2 in extra time at old Foxboro Stadium. Winning three of the first four league titles, United were the early M.L.S. darlings, but the Galaxy have surpassed them in recent years, collecting their fifth league title back in 2014.

Check out a list of all M.L.S. Cup winners below:

Hardware Through the Years

If you look back at the old M.L.S. Cup photo archive, you may notice some different trophies being doled out. In total, there are three different pieces of hardware that have been awarded to the M.L.S. champion, with the trophy evolving along with the league.

From 1996 to 1998, the champion was awarded the original Alan I. Rothenberg Trophy, named after the former U.S. Soccer President who was the chairman of the 1994 World Cup Organizing Committee and oversaw the launch of the new first division league following the tournament. The trophy itself was a heavy, bronze soccer ball with handles and the league’s crest emblazoned on the top. 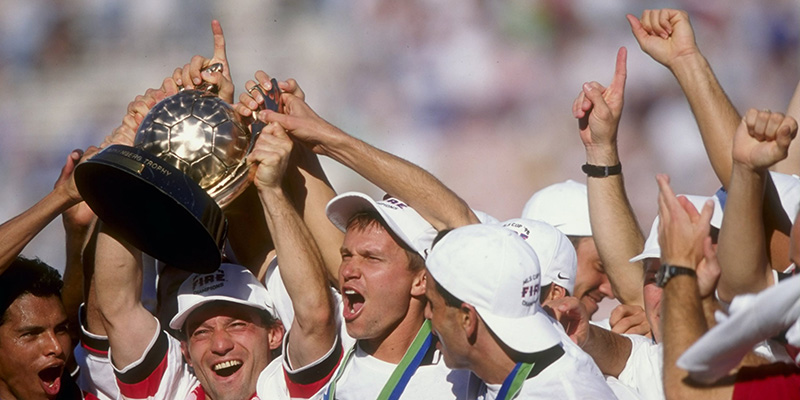 In 1999, M.L.S. redesigned the trophy, putting a silver soccer ball atop a curving beacon in a design that looked similar in nature to the National Football League’s Vince Lombardi Trophy. 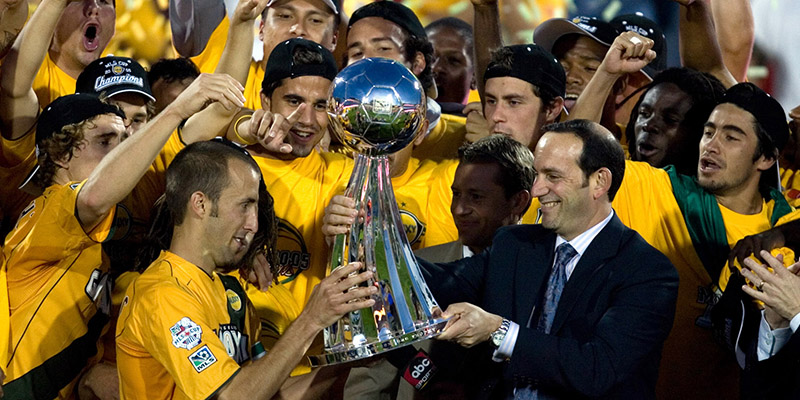 In 2008, the trophy was re-named the Philip F. Anschutz Trophy, in recognition of the LA Galaxy owner’s significant investment and contributions to the game in the United States.

The current trophy is an impressive piece of hardware that strikes a similar figure to the UEFA Champions League trophy. 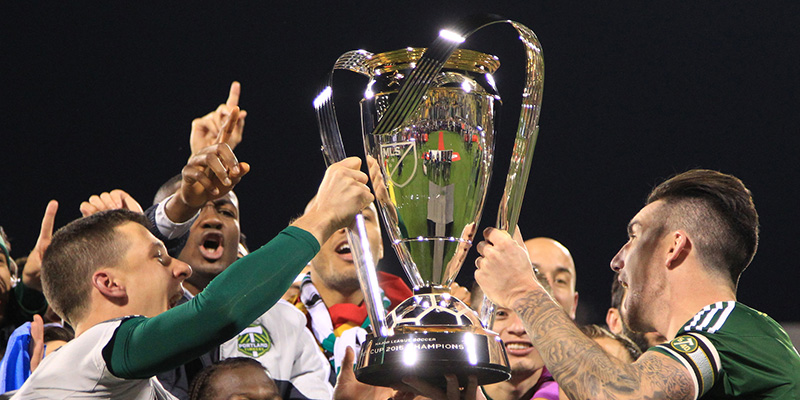 First Appearance for Both Teams

The true second wave of Major League Soccer clubs, Toronto FC’s entry into M.L.S. brought a new kind of fan vibrancy that had only been seen in spurts during the league’s first 10 years. Seattle Sounders FC’s debut in the league two years later took that to a whole new level, as the Cascadia club redefined what home support could be in M.L.S.

Despite intimidating home atmospheres, both clubs are reaching M.L.S. Cup for the first time. It’s just the third instance in 21 years where both finalists are making their debut in the league’s championship match.

How Toronto FC Got Here

Toronto FC has had an interesting year. Facing the second-consecutive season where stadium upgrades at BMO Field have forced them into a lengthy road trip to start the M.L.S. campaign, the Reds handled the nine-match away swing with aplomb, going 4-2-3 to start the season.

TFC also dealt with long absences of U.S. internationals Jozy Altidore and Michael Bradley for different reasons. Altidore missed two-and-a-half months of the season with a hamstring injury, while Bradley was away with the MNT for Copa America Centenario and returned from the tournament with a knee sprain which kept him out an additional six weeks.

Still, a talented Toronto FC side managed by former U.S. international Greg Vanney and led on the field by Sebastian Giovinco weathered the storm, while Altidore’s return at the end of August saw the MNT forward take on some of the best form of his career. A slight dip before the M.L.S. Cup Playoffs saw Toronto FC fall out of the top two in the East, but they were able to navigate with some ease past Philadelphia Union and New York City FC, before a thrilling two-leg Eastern Conference Final with Montreal Impact saw them advance to their first M.L.S. Cup championship match.

As they look for their first league title, they’ll be comforted by the fact that home clubs have lifted the trophy five of seven times they’ve had the chance to host the match at their home venue.

How Seattle Sounders FC Got Here

Unlike past years of dominant regular season performances, Seattle Sounders FC trudged through the first half of the M.L.S. campaign. The loss of Nigerian striker Obafemi Martins to start the season weighed heavily, while the absence of U.S. international Clint Dempsey during Copa America Centenario didn’t help matters at all.

Holding a 6-12-2 record 20 games into the season, the club parted ways with head coach Sigi Schmid, letting go of a man that led them to five domestic titles and the only manager the club had known during its M.L.S. era. Longtime assistant Brian Schmetzer took over, and along with U.S. international Jordan Morris and new Designated Player signing Nicolas Lodeiro turned around Seattle’s fortunes as the club went 8-2-4 down the stretch to earn their way into the M.L.S. Cup playoffs.

Even more impressive is the fact they did so without the help of Dempsey, who has been absent from the squad since the end of August due to an irregular heartbeat.

Along the way, Morris earned M.L.S. Rookie of the Year honors and has lifted the team on his back, scoring in both legs of the Western Conference Final against Colorado Rapids to get Sounders  FC to Saturday’s match.