With Brace, Jordan Morris Shoulders Responsibility in 3-2 Win vs. Martinique

For many players, the 2017 CONCACAF Gold Cup is about making the case for a bigger role as the U.S. Men’s National Team heads to the tail end of World Cup Qualifying and a potential trip to Russia next summer.

U.S. forward Jordan Morris took a nice step on Wednesday night, showing constant danger before pouncing on two second-half goals to hand the MNT a 3-2 victory against a testy Martinique side on a wild night in Tampa, Fla.

“We knew we needed the win, and I think in the first half they did a good job of keeping organized and made it tough on us,” Morris said of the Caribbean squad. “We knew coming out in the second half that we had to change a little bit and be a little more aggressive, and I think we did that as a team.

An eventful, but scoreless first half led to a fruitful second interval as the sides tallied all five of the game’s goals in the span of 23 minutes. After Omar Gonzalez pulled the U.S. ahead, Morris made his chances count, driving in on nice near post run to sneak in front of the Martinique ‘keeper and tuck home a centering pass from Eric Lichaj in the 64th minute. 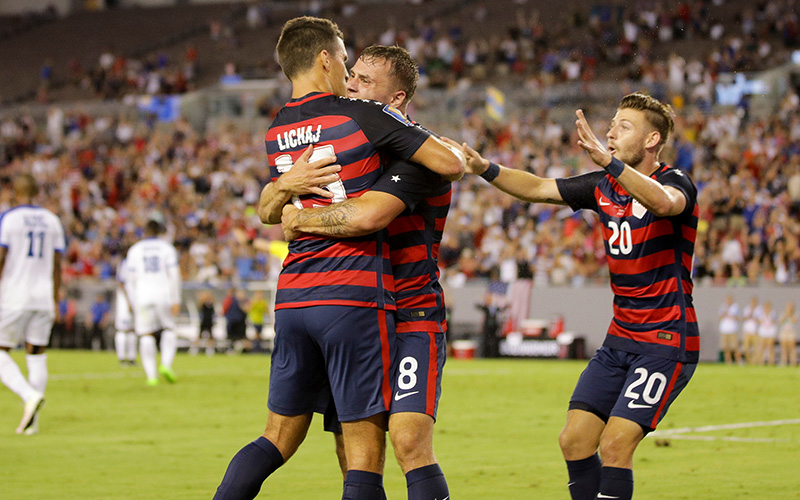 Martinique answered back swiftly, getting two goals from Kevin Parsemain and pulling level in the 74th, but two minutes later it was Morris who snatched back the lead by smashing home a first-time effort after a nice combination with Gyasi Zardes.

“I thought it was a great win. Martinique made it tough on us,” Morris said of the victory. “For me, every time I try to go out and be dangerous. It’s credit to Eric Lichaj on the first one that he played a great ball, and Gyasi on the second one. I just try to go out and do my best every time and I was fortunate enough to get a couple today.”

The brace made Morris just the seventh U.S. player all-time to record a multi-goal game at the CONCACAF Gold Cup, and the 22-year-old is also the second-youngest MNT player to do so, trailing only then 21-year-old Landon Donovan who recorded four goals in a 5-0 win against Cuba in the Quarterfinal of the 2003 tournament.

Those small accolades are nice, but according to the striker the fact that the team gutted out a victory in what ended up being a difficult match is the real reward.

“Of course it feels good to score, but it’s all about the team especially in a tournament like this. It’s about getting the three points. I’m going out every day in practice and in games trying to do the best I can and prove myself to the coaching staff, but in the end fight for the team, help the team and do whatever I can to help get the win.”

With four points, the U.S. holds the edge over Panama atop Group B by virtue of a superior number of goals scored.  Since the match against Nicaragua on Saturday is the second game in a doubleheader, the MNT will know exactly what it needs to do in order to finish in first place.

The turnaround will be fast, with the team traveling to Cleveland on Thursday and playing just about 48 hours later.

“It’ll be a quick one. I think guys are up for it and ready. Everyone on this roster is a very good player, so whoever is playing will step up and do a great job. We know that we need the win to try and win the group, so it’ll be a fun one.”