Beginning on Aug. 1, 2017, the way in which youth players in the United States register for youth soccer teams will be based on their year of birth. This new standard will help create clarity, improve understanding about developmental progress and enhance playing environments as a part of the U.S. Soccer Player Development Initiatives (PDI’s).

Here are five things you should know about the new registration rules to age groups.

What is birth year registration?

Beginning August 1, for the upcoming 2017-2018 season, any player born from January 1 to December 31 of 2007 will play in a U-11 age group. Birth year will be the only determinant for youth team registration. There will no longer be a mid-year cut-off to decide in which age group a player will play.

The United States and Canada have been the only FIFA member nations to use this model.

This PDI brings youth soccer in the United States in line with the rest of the world by using a normal calendar year of each player’s birth year to determine their age group. 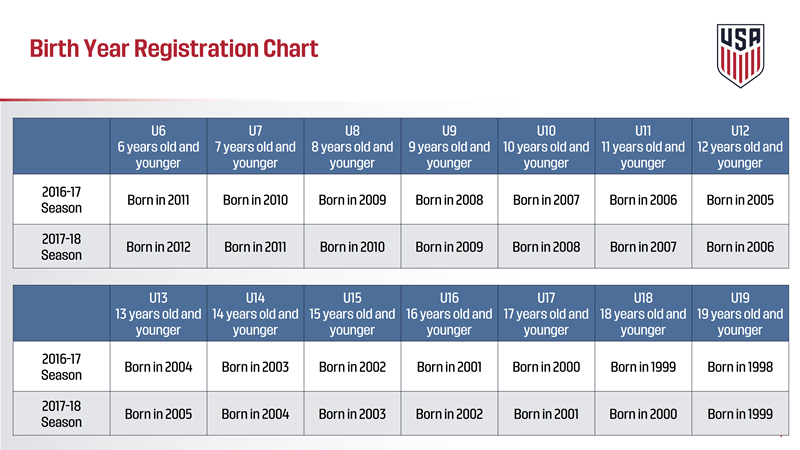 Why are the youth soccer registration standards changing?

The change in age group registration aims to support player development, and goes hand-in-hand with the new standards for small-sided games. Using birth year registration ensures that players are training and playing in the proper age group, each with their own developmental needs.

The new standard also strives to lessen relative age effect (RAE). RAE is a selection bias towards players born earlier in the calendar year. Players born in early months are naturally older and more mature, but not necessarily better players. While the change to birth year registration won’t completely solve the problem, it will make it easier to identify and understand.

How to determine your age group

Birth year registration is determined by the year a soccer season ends. For seasons that span from fall to spring or summer overlapping across two calendar years, players will register based on their age during the second year of the season. To simplify, an age group can be determined by subtracting the birth year from the year the season ends.

Check out the Birth Year and Season Matrix on page four of the PDIs FAQ [English | Spanish] for more information.

The current iteration of some teams will change with the implementation of the birth year registration rule, but the changes will affect different clubs depending on how they organize their teams. Some clubs may use mixed age group teams such as a combined U-11/U-12 team. For younger age groups, where RAE may be more prominent, more than one team could be created for each birth year. Players also still have the option to play up in older age groups, if they need stronger competition. In the short term, team compositions may change, but in the long term this shift prioritizes individual player development over team success, the driving purpose behind PDIs.

Easier to Understand and Creates Awareness

Shifting to a birth year registration system makes it easier to understand what age group a youth player belongs in. Previously, two players born in the same year could be in different age groups. Now, every player born in the same calendar year will play in the same age group. This makes it easier for parents to figure out where their child should be playing and for both coaches and parents to become more aware of how players develop based on age and how individual needs may vary.

This change also aligns the U.S. youth soccer calendar with the rest of the world. The United States was one of only two countries that used a school year calendar to determine age group. Now, the United States joins nearly every other FIFA federation. U.S. youth players will now develop and train in the same age group environment as leading soccer nations worldwide.