Here are five things to know about the U.S. WNT's upcoming AFC opponent:

USA vs. Korea Republic
The USA is 7-0-2 all-time against Korea Republic, which is ranked 16th in the world. The two teams first played in 1997 and most recently met in 2015, a 0-0 draw in Harrison, New Jersey in the final game before the USA traveled to Canada for the FIFA Women’s World Cup. All nine games between the teams have taken place on U.S. soil. Like the USA, Korea is in a rebuilding stage. Korea has eight players on this roster from the 2015 WWC: Lee Eunmi, Cho Sohyun, Jeon Gaeul, Lee Geummin, Yoo Younga, Lee Sodam, Kim Hyeri.

Growth in South Korea
Korea Republic played the first match in its history in 1990, against AFC rival Japan. While its rise to prominence in the women’s game has been a bit slow-going, since the turn of the century, Korea has made significant strides, qualifying for both the 2003 FIFA Women’s World Cup, where it was eliminated after the group stage, and most recently the 2015 FIFA Women’s World Cup, where it advanced to the Round of 16 – its best performance to date – before bowing out against world-power France, 3-0. South Korea finished second in Group E at the 2015 FIFA women’s World Cup, rebounding from a 2-0 loss to Brazil in its opening game to defeat tie Costa Rica 2-2 and then edge Spain, 2-1. The four points was good enough to earn a Round of 16 match, but it turned out to be against France, which sent the Koreans home with a 3-0 loss. Ji Soyun scored on a penalty against Costa Rica while Jeon Gaeul added the other goal. Cho Sohyun and Kim Sooyun scored their countries goals against Spain, the second coming in the 78th minute to qualify for the knockout round. 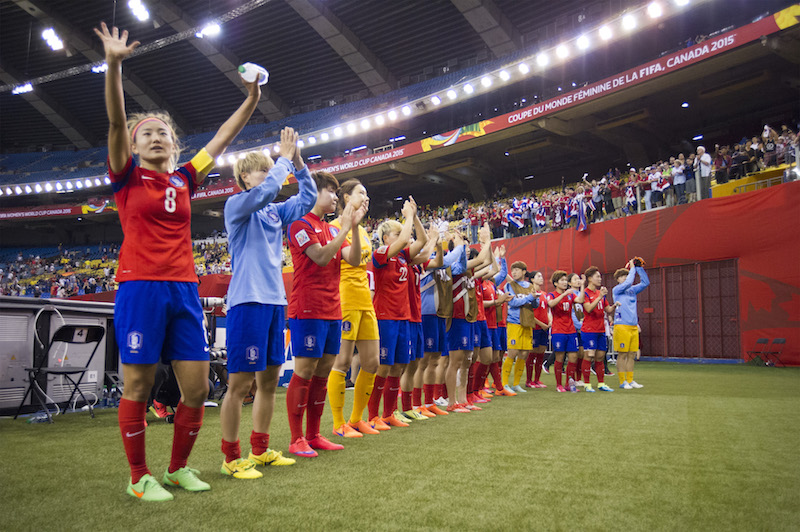 Leading the Charge
Since his hiring in 2012, the Korea Republic Women’s National Team has been under the leadership of Yoon Deok-yeo (Yoon is the family name), a former player for the Korea Men’s National Team. Yoon represented his country at the 1990 FIFA World Cup in Italy, and earned 31 caps from 1989-1991. He played professional soccer from 1984-92 in South Korea before transitioning into coaching in 1993. On July 12, 2017, it was announced that Yoon was set to sign a new contract that will take him through the 2019 FIFA Women's World Cup.

One Step Towards France
In April of this year, Yoon's South Korea team won Group B at the Asian Football Confederation Women's Asian Cup qualifying tournament in Pyongyang, North Korea, where they competed against North Korea, Uzbekistan, Hong Kong and India. South Korea needed to win the group to qualify for the final eight-team 2018 AFC Women’s Asian Cup tournament that will be held in Jordan and will serve as the final World Cup qualifying tournament for France 2019. South Korea and North Korea finished tied at 10 points each with three wins and a draw (1-1 against each other), but South Korea had a better goal difference (+20 to +17 for North Korea) to claim the top spot in Group B, which eliminated North Korea, which won both the U-17 and U-20 FIFA Women’s World Cups in 2016, from World Cup contention.

As the winner of Group B, South Korea will compete at the 2018 Asian Cup in Jordan, which also doubles as the regional qualification for the 2019 FIFA Women's World Cup, where the top five teams will punch their tickets to the main event. The teams competing in that tournament will be: Host Jordan, Japan, Australia, China PR, Korea Republic, the Philippines, Thailand and Vietnam. Korea made 10 changes on this roster set to face the USA from the Asian Cup qualifying squad that played in North Korea: Park Chorong, Ji Sunmi, Choe Yuri, Son Hwayeon, Kim Hyeyeong, Kim Hyeri, Kim Minjung, Han Chaerin and Jang Chang were not a part of that squad.