Five Things to Know About U-17 MNT Goalkeeper Justin Garces

A key figure between the posts, Justin Garces has become a staple for head coach John Hackworth throughout the current U.S. U-17 Men’s National Team cycle.

Recording three shutouts in four games so far at the 2017 FIFA U-17 World Cup, Garces continues to show why he has been a part of the U.S. Youth National Team Program since being spotted by Hackworth at age 14. Here are five things to know about the Miami-born, soon-to-be Atlanta United FC product:

GET TO KNOW JUSTIN
Born Aug. 23, 2000 in Miami, Fla., Justin Garces is the son of a Venezuelan mother and a Cuban-Ecuadorian father, and is fluent in English and Spanish. Garces has always considered himself a shy person, but has opened up more after a year and a half at U-17 residency, with him saying that his teammates have become like brothers to him.

Growing up, he played as a striker, but transitioned to his long-term place between the posts at the U-10 level. In need of a goalkeeper, Garces was picked out by his coach for being the biggest kid on the team, and while he didn’t particularly enjoy it at first, the now 6-1 ‘keeper adjusted over time and embraced the position.

KENDALL SC TO ATLANTA UNITED FC
Garces came up through the Kendall SC ranks, a Development Academy club based out of South Florida, and credits their great coaching staff for his development and how far he’s gotten in his playing career.

Recently, he decided to make the move to Atlanta United FC, and he will officially join the Five Stripes’ Academy after the U-17 World Cup. 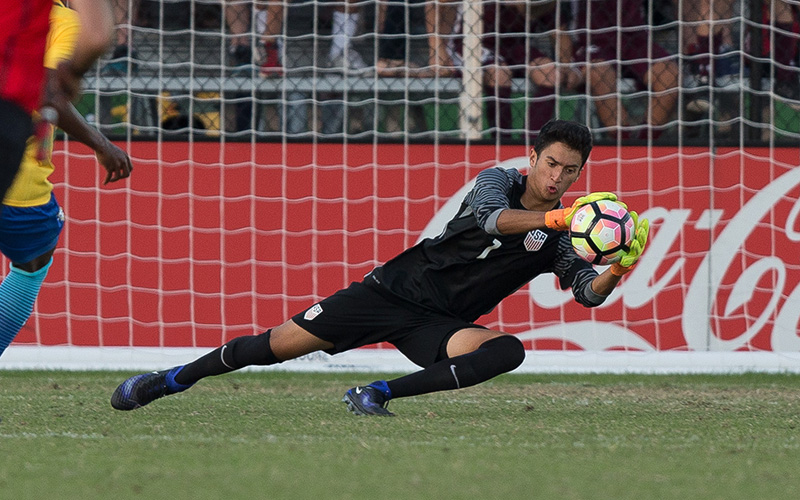 In addition to having fellow U-17 World Cup teammates Andrew Carleton and Chris Goslin there, Garces has also gotten to train with U.S. Men’s National Team and Atlanta United ‘keeper Brad Guzan. The young goalie points to Guzan’s work ethic and attitude during training as something he aspires to, and hopes to keep learning from the seasoned goalkeeper as his professional journey continues.

NO-GOAL PATROL
In early 2015, then U-15 Boys’ National Team head coach John Hackworth held a training camp in Sunrise, Fla. and scheduled Kendall SC for a friendly match. Hackworth came over and shook Garces’ hand after the match in which the young ‘keeper had played for Kendall, impressed by his performance.

A few months later, the right-footed Garces got a call-up to a U-14 Boys’ National Team Futures camp, officially introducing him into U.S. Soccer’s player pipeline.

From there, Garces’ got his first cap at the U-17 level at the 2015 Nike International Friendlies. He started the USA’s second match vs. the Netherlands, one he vividly remembers after helping the team to a 2-1 victory. 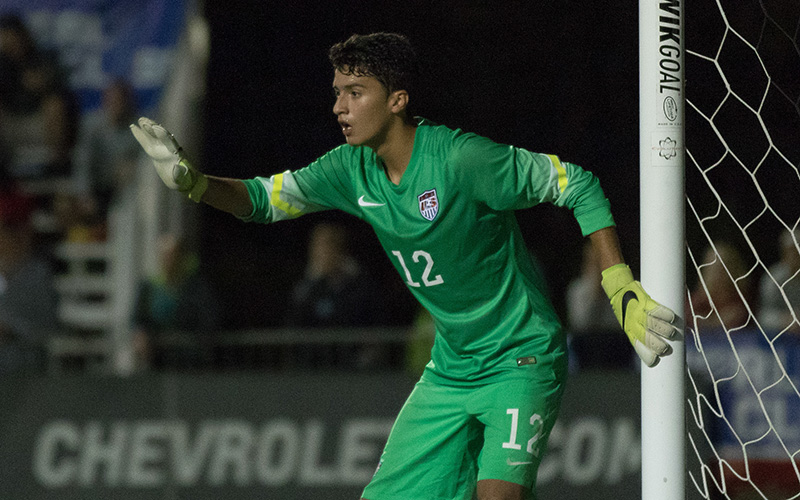 “What I remember the most of that match is the walkout,” Garces recalls. “It was my first ever walkout, and I had our captain for that game, Rayshaun McGann, in front of me. We had fans on both sides, cheering, yelling, and it was just a crazy atmosphere.”

Now a regular on the U.S. U-17 squad, Garces is a member of the “No-Goal Patrol”, a nickname given to Garces and the USA backline - including 2017 U-17 World Cup teammates Chris Gloster, Jaylin Lindsey, James Sands, and George Acosta - by Hackworth after a U-17 MNT trip to Jamaica in October 2016 when the team kept getting shutouts and winning games.

GOLDEN GLOVE PERFORMANCE
Garces’ elite performances in the past few years are starting to be recognized by more than just his coach and teammates. He was awarded the Golden Glove at the 2017 CONCACAF U-17 Championship in May for his work between the pipes, recording four wins and two clean sheets as the U.S. fell on penalty kicks to Mexico in the Final. He also earned a place in the tournament’s Best XI, along with U-17 teammates Chris Durkin, Jaylin Lindsey, James Sands and Josh Sargent.

“It was a great experience at the CONCACAF U-17 Championship,” Garces said of the tournament that qualified the U.S. for the U-17 World Cup. “We played very well as a team. The two Mexico games were an awesome experience for me, and I want to say it was one of the better tournaments I’ve ever played in. I felt confident and happy with the performance and was happy to get the Golden Glove at the end.”

Exhibit A why the U-17 #USMNT GK won 🔎. pic.twitter.com/jUs8bBaMoj

2017 FIFA U-17 WORLD CUP RUN
Currently, Garces continues to dominate the starting spot in the USA lineup at the 2017 FIFA U-17 World Cup. Playing every minute of the USA’s four matches, in helping the U-17 MNT to the Quarterfinals, the Miami native became the first U.S. goalkeeper to record three shutouts at the tournament. 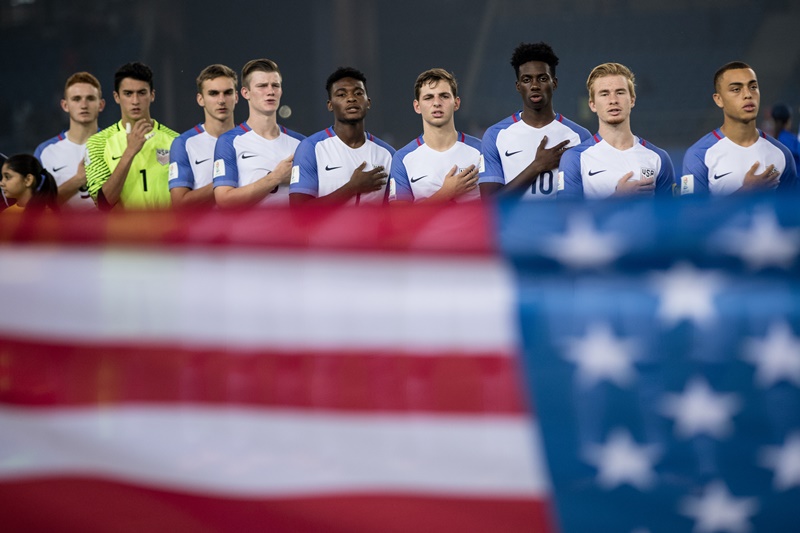 The U-17 MNT advanced to the knockout round as the third-place team in Group A after defeating India 3-0, Ghana 1-0 and falling to Colombia 3-1. From there, the team put on an impressive performance in the Round of 16, blanking Paraguay 5-0 while recording the USA’s first ever shutout in a Knockout Round game at a U-17 World Cup.

Garces and the U.S. next face England in the Quarterfinals at Pandit Jawaharlal Nehru Stadium on Saturday, Oct. 21 in Goa (10:30 a.m. ET; FS2, Telemundo).