The U.S. U-17 Men’s National Team kicks off a new cycle when it opens up the 2017 Nike International Friendlies against England on Wednesday, Nov. 29 at Premier Sports Campus in Lakewood Ranch, Fla. Here are five things you should know about the USA’s opener against the reigning FIFA U-17 World Cup champions.

After the USA’s impressive run to the Quarterfinals of October’s U-17 World Cup, the Nike International Friendlies turn the page for the U-17 MNT program. The 20-player roster, all born in 2002 or later, represent the beginning of a new cycle for the squad. This age group competed at the U-15 level for the last two years – notably finishing second at the 2017 CONCACAF U-15 Boys Championship -- and will now train and compete for the next two years in preparation for the 2019 CONCACAF U-17 Championship with hopes of qualifying to the 2019 FIFA U-17 World Cup.

England’s youth teams have put together an incredibly successful 2017. Most recently, the Three Lions took home the FIFA U-17 World Cup, taking down a high-flying USA squad in the process. England also won June’s U-20 World Cup, becoming just the second-ever nation to win both of the world’s most-important youth competitions in the same year (Brazil, 2003).

In addition to shining on the global stage, England has also shone at the continental level. The English were UEFA U-19 champions, U-17 runners-up and semi-finalists at the U-21 level.

HISTORY AT THE NIKE INTERNATIONAL FRIENDLIES

England is a frequent guest at the Friendlies, and this year marks the nation’s return after winning the tournament in 2015. 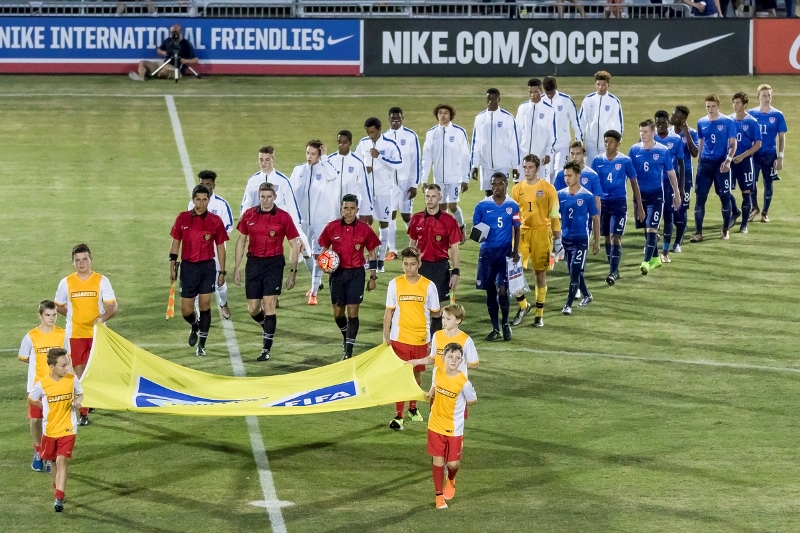 The U.S. U-17 MNT and England take the field for their 2015 Nike Friendlies showdown.

The Three Lions were the first and final opponent for the U-17 MNT’s last cycle. In 2015, players like Josh Sargent and Andrew Carleton got their first action at this level against England, falling 3-2 on a goal late in injury time. In October, England eliminated the U.S. from the World Cup in the Quarterfinal Round. Over half of England’s 22-player World Cup roster competed in the 2015 Nike International Friendlies.

In 2014, Christian Pulisic scored twice against England to kick start the USA’s 3-1 victory over the English and added an assist in the USA’s 5-1 victory against the Three Lions, en route to the 2013 title.

This year’s championship marked England’s fourth appearance at the U-17 World Cup, with each coming during the last decade. The English have advanced from the group stage in three of four events and they’re one of just nine countries to win the tournament.

In European competition, England has won the UEFA U-17 Championship twice and taken runner-up twice. The Three Lions have also finished as semi-finalists four times, placing top four in eight of the tournament’s 16 years.

After its victory at the World Cup, England is also bringing the next iteration of its U-17 squad to Lakewood Ranch. All of the players are born in 2002 and come from English clubs, 11 of the 19 from Premier League academies. Manchester City has the most representation on the roster, with six players called to Florida.