A youthful U.S. Men’s National Team roster will gather in Cary, N.C. for the USA’s March friendly against Paraguay. As the MNT continues to give opportunities to rising talents, five have been called for their first senior team camp and will look to earn their first caps against La Albirroja at Sahlen’s Stadium at WakeMed Soccer Park on March 27 (7:30 p.m. ET; FS1, UniMas).

Here’s a look at the five camp newbies: 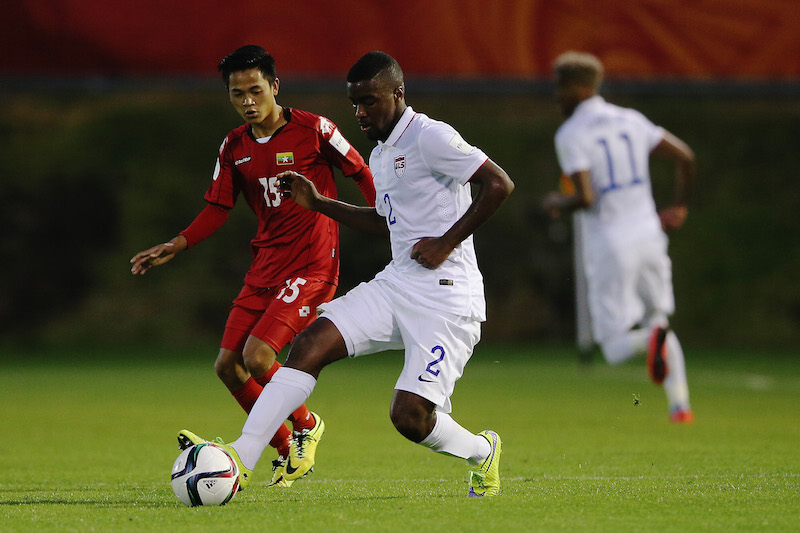 Shaq Moore is blazing a unique trail as just the fourth American to play in the Spanish first division. He’s broken through this season at Valencia’s Levante after spending most of the 2016 campaign on Las Granotas’ B-squad. While other MNT players have come to La Liga as established pros, Moore has worked his way up through the country’s lower ranks.

After captaining the U-17 Men’s National Team at the 2013 CONCACAF U-17 Championship, and was part of the U.S. squad that advanced to the quarterfinals at the 2015 FIFA U-20 World Cup. The son of Trinidad & Tobago international Wendell Moore, Shaq came up through IMG Academy and spent time with FC Dallas.

👀 @Sh4qMoore showing out at Camp Nou! Young 🇺🇸 on the rise.pic.twitter.com/Iq6BjrskcG

In 2015, Moore decided to test himself with a move overseas and began his climb through the Spanish soccer pyramid with third division Huracán Valencia CF. After a stint at Real Oviedo, Moore made his first-team debut with Levante on October 26 in a Copa del Rey match against Girona. His first season in Spain’s top flight has seen him take on some of the world’s best, including a strong showing in a start against Lionel Messi and FC Barcelona at Camp Nou on January 7. 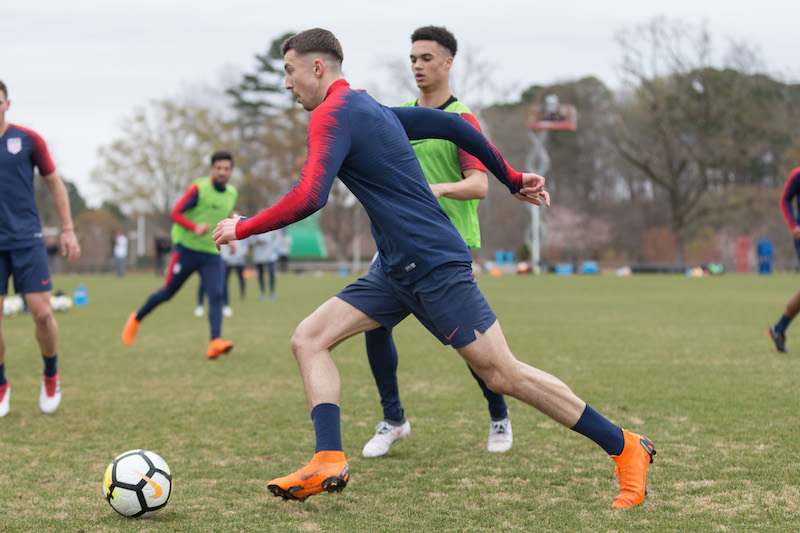 While Wisconsin hasn’t produced a ton of players for the senior team, it’s currently home to one of the top scorers in the Dutch Eerste Divsie: Andrija Novakovich. Playing up top for SC Telstar (on loan from English Championship squad Reading), Novakovich has netted 18 goals in 29 matches this season, good for second in the league. A hot streak of late has seen six strikes in his last five appearances for the White Lions.

Involved with the U.S. Youth National Team setup since 2013, Novakovich has always been a goalscorer. He played his youth soccer with the Chicago Magic, developmental home to the likes of Brad Guzan, Eric Lichaj and Ricardo Clark. In 2014, Novakovich passed up a scholarship at Marquette University to sign at Reading. His grandfather played professionally in England, and Reading provided the opportunity to follow in his footsteps.

After a few years in the club’s youth system, Novakovich broke out last season as the top scorer for the Royals’ U-23s, bagging 16 goals. The youth success saw him sign a contract extension through summer 2019 and at the advice of former Dutch international and Reading head coach Jaap Stam, secure a loan to the Netherlands. 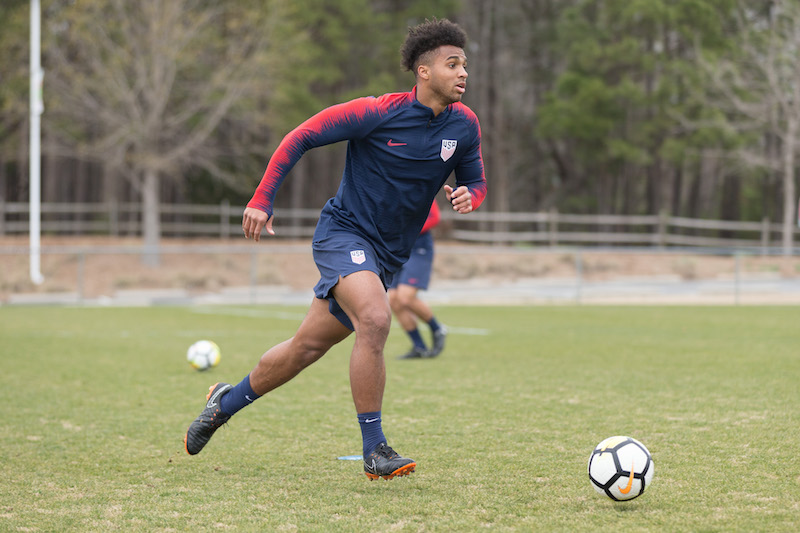 Erik Palmer-Brown has earned his first senior MNT call-up after climbing the rungs of the Youth National Team system. The Lee’s Summit, Mo. Product has made major moves for club and country over the last year, captaining the U-20 MNT to a quarterfinal run at last year’s World Cup in Korea Republic, before signing with English Premier League powerhouse Manchester City in January.

A product of Sporting Kansas City’s U.S. Soccer Development Academy sides, Palmer-Brown became the club’s then-youngest-ever professional player at age 16. He was the second- youngest player on the USA’s 2015 U-20 World Cup squad, earning valuable experience for another run with the U-20s two years later.

As captain of last year’s U-20 team, Palmer-Brown led the USA to its first-ever CONCACAF U-20 Championship and picked up the Golden Ball on the way as the competition’s best player. In Korea at the 2017 U-20 World Cup, Palmer-Brown once again captained the squad and played every minute in the team’s quarterfinal campaign.

The performance and potential earned Palmer-Brown a big move overseas, signing with City at the start of this year. The EPL club immediately loaned Palmer-Brown to Belgian side KV Kortrijk, whom he debuted for earlier this month. 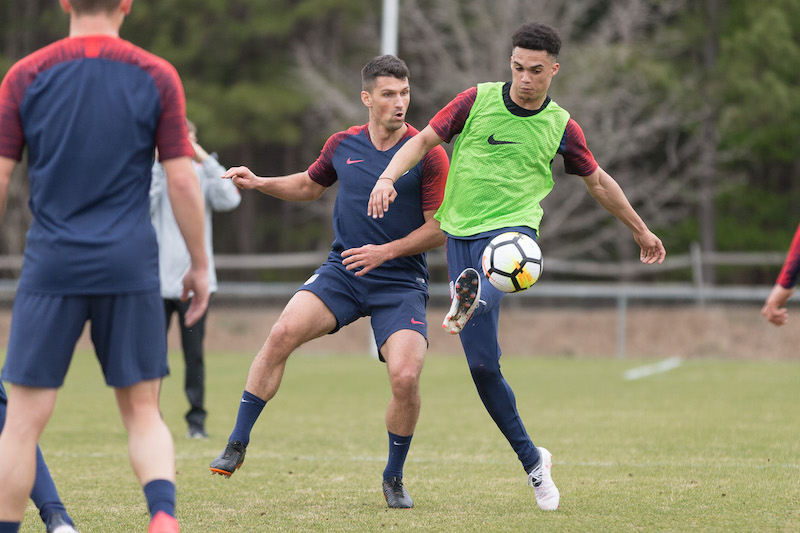 After a devastating knee injury kept him off-the-field for the entire 2015-16 season, Antonee Robinson has roared back to become an integral contributor at English Championship side Bolton and earn his first MNT call-up.

Born in Milton Keynes, England, Robinson entered Everton’s academy at age 11. He signed his first professional contract with the club in July 2015 at the age of 17 and put together a stellar youth season that earned him Everton U-18 Player of the Season honors. The campaign catapulted him to two international tours with the first team, but in his first appearance, he suffered a serious knee injury that required surgery.

After a season on the mend, Robinson regained his form and helped lead the Everton U-23s to the Premier League 2 title the following season. His performance secured a two-year contract extension and earned him the opportunity for first-team football on loan at Bolton. There, the defender nicknamed “Jedi” has impressed both his teammates and coaches as the club fights to avoid relegation.

While his trip to Cary will be his first involvement with the MNT, Robinson previously played for the U-18 MNT in a friendly against Germany in December 2014. 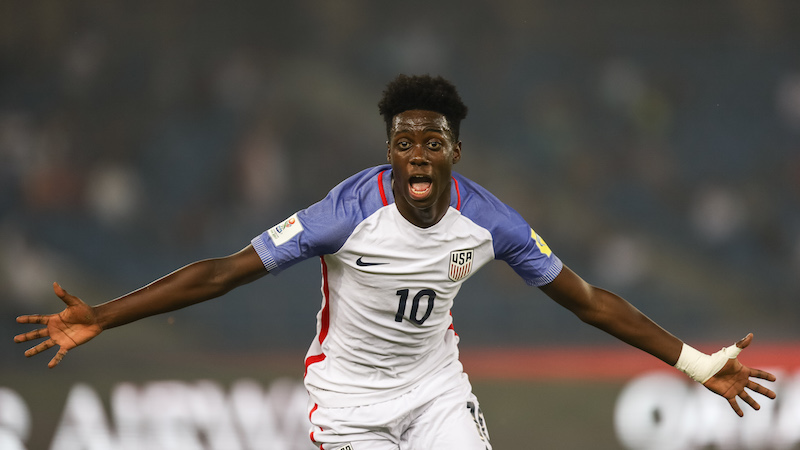 The last few months have seen a rapid rise for Weah, with the recently-turned 18-year-old also the youngest player called to camp. In October, he starred for the USA at the U-17 World Cup, highlighted by a hat trick against Paraguay, the first-ever for the red, white and blue in a World Cup knockout round at any level.

Since his star-making turn in India, he’s risen through Paris Saint-Germain’s youth ranks and has made two first-team appearances for the French giants this month. Now, he’s earned his first National Team call-up.

Weah Debuts for PSG on March 3 at Troyes

A tremendous achievement! 🇺🇸 18-year-old @TimWeah comes on for his professional debut with PSG.pic.twitter.com/nqMuKmJZiI

Tim hasn’t been the only Weah making waves of late. His father, George, was inaugurated as president of Liberia earlier this year. It’s the same George Weah that some consider the greatest African soccer player of all-time, the 1995 Ballon d’Or winner and star with AC Milan and Paris Saint-Germain over the course of his 19-year career.

While his father starred in international­ football, Weah was born in New York City. He spent his domestic youth career with Development Academy sides BW Gottschee and the New York Red Bulls. In 2014, Weah moved overseas to join the academy at PSG, the club where his father rose to prominence from 1992 to 1995. He signed professionally with Les Parisiens last June.

After scoring two goals for the U-17 MNT at the 2017 CONCACAF U-17 Championship, Weah formed part of a formidable attacking trio in India alongside Andrew Carleton and Josh Sargent. His hat trick against Paraguay in the Round of 16 made headlines, and his screamer of a second score was one of the goals of the tournament.