After wins in their first games of the 2018 SheBelieves Cup, and draws in their second, the U.S. WNT and England will meet on Wednesday, March 7 (7 p.m. ET; ESPNews) in Orlando with everything to play for in the final match of the tournament.
March 6 2018
5 Things 2 Know

After wins in their first games of the 2018 SheBelieves Cup, and draws in their second, the U.S. WNT and England will meet on Wednesday, March 7 (7 p.m. ET; ESPNews) in Orlando with everything to play for in the final match of the tournament.

Here are five things to know about The Lionesses:

USA vs. England at the 2018 SBC: Everything to Play For
The USA and France are the only two teams to have won a SheBelieves Cup title before. With France and Germany now out of contention for the title, only the USA and England can win it on Wednesday, making their matchup on the last day of competition a tantalizing contest between the No. 1 and No. 3 teams in the world.

The USA will need a victory against England to win the tournament, while England can take the top of the podium for the first time with a draw or a win. The USA and England are tied on points with four each (the USA beat Germany and tied France and England beat France and tied Germany), but England is ahead on the first tiebreaker, goal difference, based on its 4-1 victory against France in the tournament opener.

The USA came into its final match of the inaugural SheBelieves Cup in 2016 in the same situation, needing a victory against Germany to take the title. The USA went down 1-0 early in the game before rallying to win 2-1 and lift the trophy.

A Short But Interesting History Between the USA and England
On Wednesday, the U.S. will play England for only the 16th time in the teams’ history. The U.S. is 9-4-1 all-time against England, with the last three meetings between the teams resulting in 1-0 games – two wins for the USA and one for England.

The USA beat England 1-0 on Feb. 13, 2015, in Milton Keynes, England with the lone goal coming from an Alex Morgan header, and against at the 2016 SheBelieves Cup in Tampa, Fla, on a brilliant goal from Crystal Dunn.

The meeting with England in Milton Keynes, England, sparked a 24-game unbeaten streak for the USA which included the run to the World Cup title.  Prior to the 2015 meeting, the USA and England hadn’t played since a 2011 friendly in London that saw England defeat the USA 2-1. 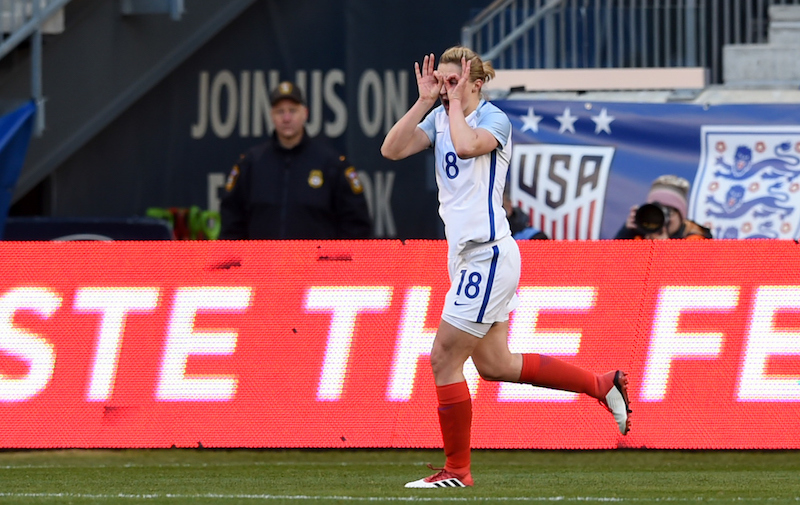 Ellen White scored the game-winner against the USA last year. She has scored twice so far in this year's tournament.

England turned the tables on the USA at last year’s SheBelieves Cup, scoring in the 89th minute when Ellen White, who has scored twice in this year’s tournament, finished from close range after a goal mouth scramble from a set play. Last year’s game was a tight one defensively with the USA firing seven shots to England’s six. The USA had three shots on goal to England’s two. But England had five corner kicks to the USA’s zero.

The Lionesses in 2017
England played 18 matches in 2017, including seven friendlies, three games at the SheBelieves Cup, five games at the EUROs and three World Cup Qualifying matches. Overall, England finished the year going 11-5-3, but had some terrific results throughout the year.

It defeated the USA 1-0 at the SheBelieves Cup, and earned a huge result during the Women’s Euro quarterfinals when it defeated France 1-0 on July 30, 2017. The 1-0 win was the first time The Lionesses had defeated France since 1974.

England has also gotten off to a hot start in World Cup qualification, going 3-0-0 and outscoring the three teams on its group – Russia, Bosnia and Herzegovina and Kazakhstan – by a combined score of 15-0. Wales is also in the group but England has not played them yet. Their first WCQ match is scheduled for April 6.

Phil Neville’s Coaches First Matches as England Head Coach at the SheBelieves Cup
Named by the FA as the new England Women’s National Team head coach in January of this year, Phil Neville has had a terrific debut at the 2018 SheBelieves Cup, leading England to a resounding 4-1 win against France and coming from behind to tie Germany twice for a 2-2 final score.

A Talented Group
England brought some newer players, but still has 12 players from last year’s She Believes Cup on its roster. Neville has also included 10 players from England’s third-place team at the 2015 FIFA Women’s World Cup in Canada. England has some extremely experienced players, led by Fara Williams who has piled up 168 caps and 40 goals. Forward Ellen White is perhaps England’s most dangerous forward. She has 71 caps and 26 goals. Five-foot-11 midfielder Jill Scott has 128 caps with 19 goals and has proved a powerful force in the middle.

The defensive core also includes former UNC Tar Heel Lucy Bronze, who has 54 caps and six goals on her resume. Williams scored three times from the penalty spot during the 2015 Women’s World Cup, including the game-winner against Germany in overtime of the third-place match. Bronze scored twice in the World Cup, including the game-winner against Canada in the quarterfinal match.

There are four women on the England roster that currently play outside of their country. Bronze is in France where she plays with U.S. midfielder Morgan Brian at Olympique Lyon and Toni Duggan plies her trade for FC Barcelona. England also has two NWSL players on the roster in Rachel Daly of the Houston Dash, long an attacking player who has switched to defender for club and country, and forward Jodie Taylor of the Seattle Reign. Taylor, who returns to the league after playing with the Washington Spirit and the Portland Thorns over 2014-15 (when she scored 14 goals between the clubs), scored the opening goal against Canada in the Women’s World Cup quarterfinal.