The USA will open the 2018 SheBelieves Cup against Germany, the current Olympic Champions, on March 1 (7 p.m. ET; ESPN2) in Columbus, Ohio. Here are five things to know about the powerhouse Germans.

Champions Clash
The U.S. Women’s National Team and Germany have a rich history of competitive matches and the two countries have combined to win 10 of the 13 FIFA senior level championships that have been contested, with the USA taking the 1991, 1999 and 2015 World Cups, and the 1996, 2004, 2008 and 2012 Olympics; and Germany winning the 2003 and 2007 World Cups and the 2016 Olympics. The teams have faced each other in World championships on several occasions, such as in the 1999 World Cup in Maryland, a 3-2 USA win, and most recently at the semifinal match of the 2015 FIFA Women’s World Cup, a U.S. 2-0 win and one of the most dramatic and exhilarating matches between these opponents.

Even though almost all 32 games played between the have been tight affairs, the USA hasn’t lost to Germany since 2003 and holds a 21-4-7 all-time advantage. The match on March 1 will be the 15th between the teams since that loss in the World Cup semifinal in Portland, Oregon. The U.S. Women are undefeated in those games, with nine wins and five draws. The most recent game between the sides came in last year’s SheBelieves Cup, which the U.S. won 1-0 on a goal from Lynn Williams and behind some terrific play from goalkeeper Alyssa Naeher.

Challenging 2017 for Germany
Germany had a busy 2017, playing 14 games overall which included matches at the 2017 SheBelieves Cup, the UEFA Women’s EURO and in FIFA World Cup Qualifying. The Germans made headlines twice in 2017 due to some uncharacteristic losses, which has been further proof of the rapid growth and improvement in the women’s game in Europe and worldwide.

To open its 2017 calendar, Germany made its second appearance at the SheBelieves Cup, where it lost its opening game to the USA, but bounced back with a 0-0 draw against eventual tournament winner France, and took down England, 1-0 to close out its run to a second-place finish.

Germany then had a pair of high-quality friendlies at home as it continued preparations for the Euros later in the summer. Germany beat faced Canada 2-1 on April 9 and followed that with a 4-1 against Brazil on July 4. 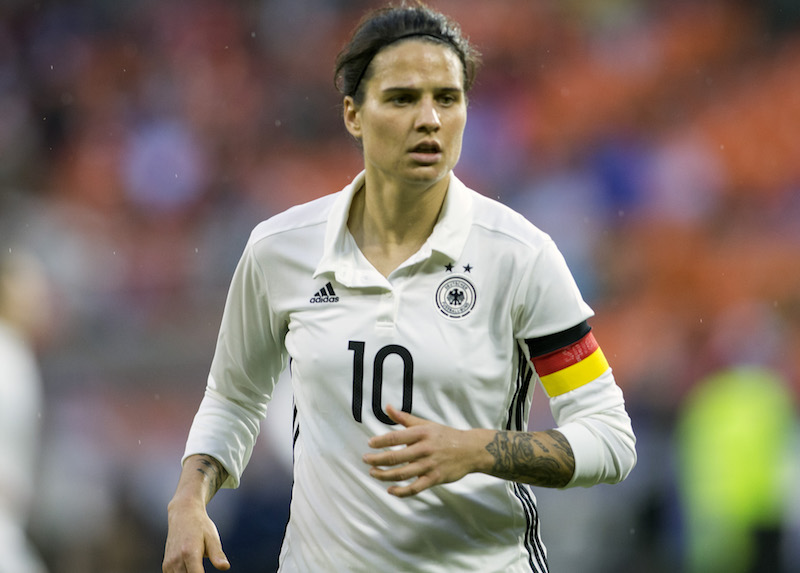 Germany's Dszenifer Maroszan is one of the most talented midfielders in the world.

Later that July, Germany began its 22-year title defense at the EUROs, where it was drawn into Group B with Sweden, Italy and Russia. Germany started with a scoreless draw against Sweden, and followed it with 2-1 and 2-0 wins against Italy and Russia, respectively. In the knockout stage, Denmark earned a legendary result and ended Germany's reign as six-time defending champions of Europe with a 2-1 win in the quarterfinal. The loss was just Germany's third in a Euro tournament since 1993.

European Qualifying for the 2019 FIFA Women’s World Cup began in September of 2017, and Germany kicked things off well with a 6-0 win against Slovenia. Its next game was another win, 1-0 against Czech Republic. On Oct. 20, Germany lost to Iceland 3-2, making it the first loss in World Cup Qualifying since June of 1998. The Germans quickly bounced back and defeated Faroe Islands 11-0 to wrap up its 2017 qualifying matches (it will resume in 2018). Germany then took on France in a friendly on Nov. 24 and won convincingly 4-0 to finish its year on a high note.

What’s Coming in 2018
Like last year, Germany’s 2018 will begin against the USA at this year’s SheBelieves Cup, and continue against England and France during the seven-day tournament. Following its trip stateside, Germany will resume UEFA Women’s World Cup qualifying with matches against the Czech Republic at home and Slovenia on the road in April, and against Iceland on the road and Faroe Islands at home in September. The Germans have also scheduled a friendly with Canada in June.

Neid, who took the positon in 2005, finished her highly successful 11-year tenure by winning the gold medal at the 2016 Olympics. She also won the 2007 Women’s World Cup and the 2008 Olympic bronze medal. She was named the FIFA Women’s World Coach of the Year in 2010, 2013 and 2016. Neid has transitioned into a player development position with the DFB. 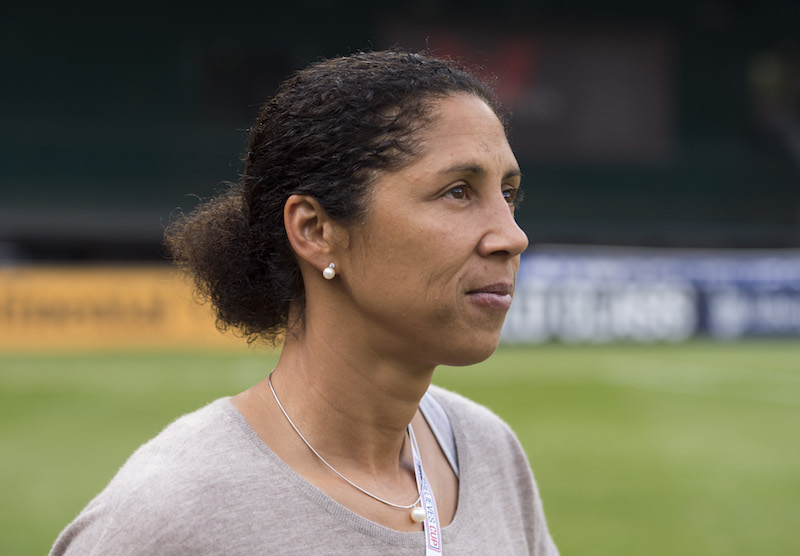 Woman in charge: Steffi Jones is at the helm for the Germany Women's National Team.

Jones received much praise for her work as president of the organizing committee for the 2011 FIFA Women’s World Cup in Germany. It was a ground-breaking event for women’s soccer and especially women’s soccer in Europe. As a player, Jones played most her career for her hometown FFC Frankfurt team, but also played in the USA with the Washington Freedom in 2002-03, helping the club to the championship in 2003. Jones is a dual German and American citizen as she is the daughter of a German mother and an American father.

Fresh Faces
Since 2015, Germany has said farewell to a large group of legendary players, thus opening the doors for a fresh wave of talent to carry the Germany legacy forward. Players like Anja Mittag, Nadine Angerer, Célia Šašić, Melanie Behringer and Saskia Bartusiak were all integral parts of Germany’s success in the last decade.

But just like the USA’s infusion new talent, Germany has welcomed talented youngsters Sara Däbritz, Leonie Maier, Dzsenifer Marozsan, Alexandra Popp and Linda Dallmann – all players born in or after 1991, who have quickly established themselves as a strong contingent in the new era of Germany women’s soccer.

Two young German players can already be called world class in Dzsenifer Maroszán, who at 25 captains the team, and Alexandra Popp (26). They were both members of Germany’s 2015 FIFA Women’s World Cup roster, the 2016 Olympic Games and the 2016 and 2017 SheBelieves squads. Marozsán and Popp, who have long been hailed as two of the top young players in the world after starring for Germany’s team that won the 2010 FIFA U-20 women’s World Cup at home – Popp won the Golden Boot in that tournament, scoring 10 goals, and was the tournament MVP – scored at the 2015 World Cup and 2016 Olympics. In Canada, Popp scored against Ivory Coast, while Maroszán tallied her goal in the knockout stage against Sweden. In Brazil, Popp scored against Zimbabwe in the opening match of the tournament and Maroszán scored a crucial goal in the gold-medal game against Sweden, helping Germany take the title with the 2-1 win. Despite their young age, Marozsán and Popp have played 81 and 83 times and have scored 32 and 40 goals, respectively.

Twenty-three-year-old Däbritz played in two games at last year’s SheBelieves Cup and was part of the German team at the 2015 Women’s World Cup and the 2016 Olympic Games. She scored two goals at the World Cup and three goals at the Olympics, one in Germany’s opening game against Zimbabwe, one in its second game against Australia, and one in Germany’s 2-0 semifinal win against Canada. Overall, she has 48 caps with Germany, and has scored eight international goals, five coming at major tournaments.

Like the USA, Jones has also called several young players for the SheBelieves Cup, two of whom are uncapped in 21-year-old Carina Schlüter and 22-year-old Sharon Beck. Twenty-year-old Lea Schüller, who already has three caps and goal with Germany, also made the roster.