Not many gave the U.S. Men’s National Team a chance on Saturday against France. Head coach Dave Sarachan named a starting XI that carried an average age of 22 years and just seven caps to take on a prohibitive World Cup favorite. In its final game before Russia, France trotted out a star-studded line-up, stacked with some of the world’s best players who were fresh off European and domestic titles aplenty.

The sold-out crowd of more than 58,000 roared and feverishly waved French flags as Les Bleus took the field. They stood ready to see their team cruise through one last send-off match before a projected deep run through Russia. In the opening minutes of the game, the MNT showed nerves that were to be expected on such a massive stage.

On a trip designed to provide the USA’s young players experience against elite opposition in raucous environments, France provided a fitting final exam. As the game progressed, the USA settled down and hung tough. The 1-1 draw put an exclamation point on this month’s camp, and earned the youthful MNT a passing grade.

“We’ve done a good job each game against Bolivia, Ireland and now in France, improving and adjusting to the speed of the game,” captain Wil Trapp said following the result in Lyon. “It’s really about us continuing to grow from the experiences and meld as a team. I think tonight was a huge step in the right direction.” 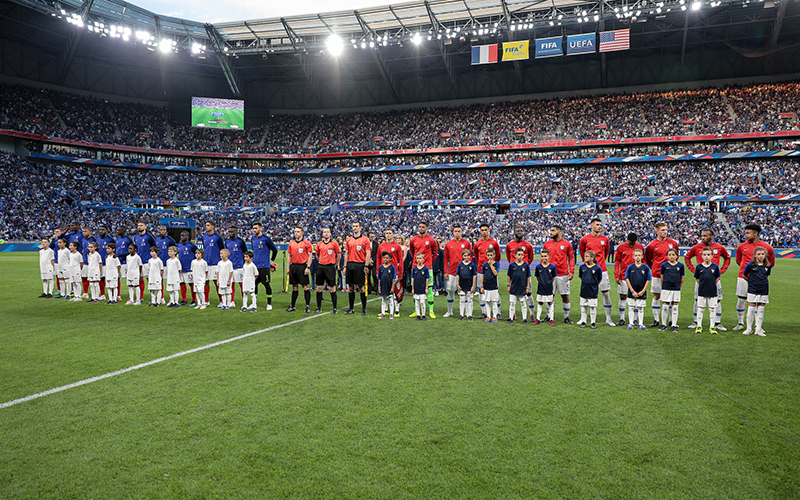 One week after the USA allowed a last-minute game-winner against Ireland, the young Americans proved themselves quick studies. In Dublin, the Irish rode momentum from their 57th minute equalizer to the winner in the 90th minute. Despite a strong first-half showing, the MNT found itself unable to close out the game.

With Kylian Mbappé’s 78th minute equalizer, the USA conceded another second-half goal against France, but this time, the team weathered the storm that followed.

“It was a learning experience last week,” Trapp said. “I thought we did a good job of taking on those mistakes and applying some good effort and some excellent work tonight. To concede was disappointing, but in the end we did a great job.”

A Man of the Match performance from goalkeeper Zack Steffen ensured that Mbappé’s strike remained Les Bleus’ one and only goal. The French dominated possession in Lyon and outshot the U.S. 19-2 margin19 to two. Called upon early and often, Steffen held down the fort, making seven saves against the vaunted French attack for 90 minutes plus. One of his finest efforts came in the final moments of the match, when he stopped a screamer from Nebil Fekir and the rebound attempt from Ousmane Dembele in the 93rd minute.

France wanted the late winner. @zackstef_23 was NOT having it. pic.twitter.com/wv7YlIomNj

“It was a pretty surreal game,” Steffen said. “The guys grinded in front of me, and when it came down to it ,I had to step up and do my part. I’m proud that we were able to keep our mentality strong at the end. It’s a big result and a good performance by us.”

The scenario at Groupama Stadium upped the ante from many of the challenges faced in Dublin. With France’s fearsome front line, communication stood key for the defense, made all the more difficult by a boisterous home crowd. The veteran Ireland squad provided a physical test for the USA’s young midfield with some rough-and-tumble play at Aviva Stadium, and France provided a similar battle as the USA fought to find space in the middle.

“It was very, very physical, especially in the midfield,” midfielder Tyler Adams said. “They have guys that are very scrappy in there and want to get after the game, and we want to do the same thing - make them uncomfortable with the ball and then try to set up little plays. It’s definitely a physical one, but anytime you play a team like France, they’re going to give you their best.”

“It’s an intimidating game, it’s an intimidating environment, but we have to be able to step up to the plate when our names are called,” defender Tim Parker said. “I think we did a really good job. Moving forward, obviously we want to take this and continue to go with it.” While physical duels ruled the midfield and the back line made some hard tackles to slow down the French, the U.S. found some room to run up the wings. Outside backs Shaq Moore and Antonee Robinson, both in their second appearance for the MNT, created some of the team’s best chances. In the 44th minute, Moore launched a through ball from the wing and French defender Dijbril Sidibe misplayed it. Julian Green pounced and slotted home a hard roller. It stood as the USA’s only attempt on goal, but the 23-year-old made it count.

“I’m always happy if I could score, if I could help the team,” Green said. “The defender made a mistake and I just turned and shot on goal. They have a really good team, it was a lot of running, but I think we did a good job.”

IT. ONLY. TAKES. ONE.@J_Green37 beats Hugo Lloris near post to give 🇺🇸 the lead on French soil. pic.twitter.com/gJ59iqOcBO

With 10 caps, Green, served as the second-most experienced member of the starting XI in Lyon. Since November, head coach Dave Sarachan has strived to provide opportunities for the MNT’s young player pool to gain valuable experience. The result of his efforts: seven of the 11 starters against France were uncapped prior to November. Of the four that had previously appeared for the USA, Matt Miazga had earned just three caps, while captain Wil Trapp had only played in the team’s annual January camp.

This inexperienced  MNT has learned a lot since November, and they are just getting started. Since its matchup with then-No. 3 Portugal, the team has collected a 2-1-3 record. In a serious test against World Cup contenders in France, the group showed some serious resolve. With this camp’s final exam in the books, the future looks brighter than ever.

“For me, taking it all in when I was walking out, I was trying to hold back a smile,” Adams said. “We put our hearts behind the game. A lot of guys with their first caps, these experiences are going to help going forward now. Whenever the next matches come up and whoever gets called in, I think the exposure that we’ve had now in hostile environments against good teams is something we’re going to take with us.”