There are just two friendly matches standing between the U.S. Women’s National Team and World Cup qualifying with the world’s top-ranked team taking on Chile on Aug. 31 at 8 p.m. PT at StubHub Center in Carson, California, Presented by Volpi Foods; and Sept. 4 at 7 p.m. PT at Avaya Stadium in San Jose, California.

Numerous key players have missed some time this year, some significant time, due to injuries so as the team gathered in Los Angeles for a few days of training ahead the first match against Chile, the fact that almost all the USA’s “regulars” were back in camp meant lots of smiles, good vibes and of course, the usual intense competition between the lines.

For the last few months, and at different periods of time, injuries had kept Tobin Heath, Rose Lavelle, Samantha Mewis, Becky Sauerbrunn, Kelley O’Hara, Mallory Pugh and Casey Short away from the U.S. WNT. It has been a long road to finally have all seven back in the mix, and their return has added an extra dose of excitement and energy within the team environment. For Heath, Lavelle Mewis and Short, this is their second camp back after also being part of the 2018 Tournament of Nations roster last month, but for O’Hara and Pugh, this marks their first camp back in five and four months, respectively.

“I feel good, and being back here is amazing,” Pugh said. “You don’t realize how much you miss it and how important this is until you’re away for a long time.”

One positive off-shoot of players missing action is the opportunities it opens for other players to get playing time and continue prove themselves at the international level. During the time these players were recovering, the WNT continued to play excellent soccer and get quality results while extending its current unbeaten streak to 19 games. What makes their return so significant is that it marks the first time this year, and first time going back to early 2017, in which almost the entire core of players U.S. WNT head coach Jill Ellis has been working with for the past two years has been together. 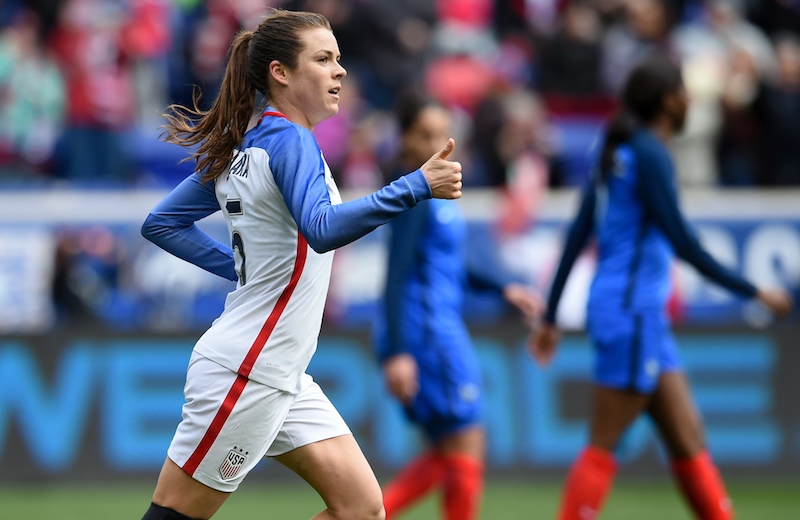 Kelley O'Hara returns to the team for the first time since March 2018.

That said, not all the players are back. Seattle Reign players Allie Long and Megan Rapinoe missed this event due to minor injuries, but such is the nature of top players competing in a long and physically demanding club season. Still, the USA is as close as it’s been to a full roster in a long while, and that’s a good thing.

“Some of these players are my closest friends and it really just feels like family any time we are reunited,” O’Hara said. “There’s only one month to qualifying now so the more time we can spend together, the more it will help this team’s camaraderie and cohesiveness.”

These 10 days in California will not only help reintegrate these players into the mix, but also serve as a final test for all players to show they deserve a spot on the World Cup qualifying roster. While evaluation has been constant for Ellis and her staff in the run up to World Cup qualifying, these games – the final stretch before the USA comes together in Cary, N.C. to begin the Concacaf Women’s Championship – could give someone the extra push to solidify a spot on the qualifying squad.

While competition and winning are always at the forefront of anything related to the U.S. Women’s National Team, this group is above all one big family. And at long last, almost the entire family has been reunited and it comes at a great time.