A Hall for All: American Soccer's Treasure Chest

Fame is too small a word. It does no justice to what happens here in the National Soccer Hall of Fame, or what’s enshrined in its new walls. The grand opening, on Oct. 21 with the induction of the Class of 2018, was more than fireworks and high-tech wizardry. It was more than the red blazers and speeches. It was surely more than fame. In the Hall that night was decency and integrity. Fraternity and humility. Humor. Family. Gratitude. Mostly, there’s reflection here. It’s a Hall of mirrors. 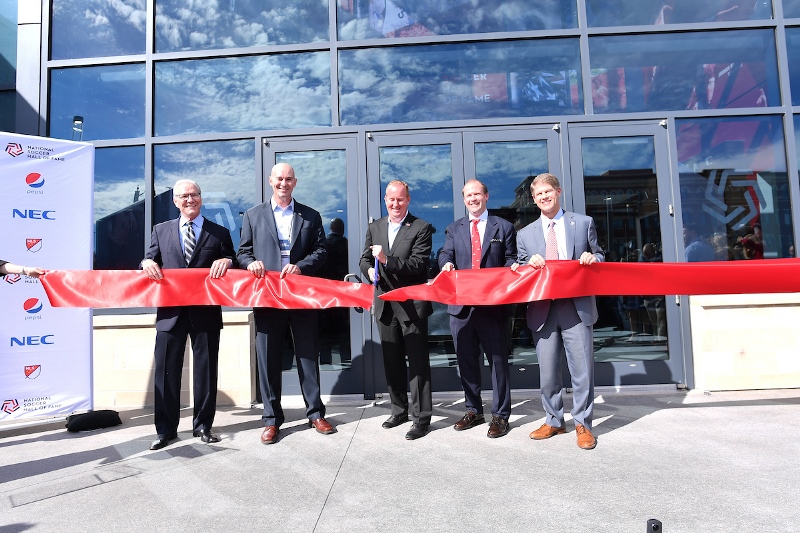 The weekend began quietly. A ribbon-cutting under a heavy iron sculpture. It’s a player and he’s huge and inverted, flying into a bicycle kick. Motion and solid weight combined. We’ve seen this kick before, maybe on top of our first trophies at soccer camp, like the ones run by Dr. Joe Machnik over there, in the red blazer he got in 2017. Brad Friedel (Class of 2018) used to work those camps as a teenager. And Pele, how many times did he have to shoot and re-shoot his epic bicycle kick for the climax of John Huston’s 1981 movie Victory? And, hey, isn’t that Werner Roth over there (Class of 1989). He was a NY Cosmos teammate of Pele’s (Class of 1993), and he was in the picture too, as the villainous Nazi team captain.

It’s a Hall of Connections. You’ll find them even if you’re not trying.

All night at the North End of Toyota Stadium, where FC Dallas of Major League Soccer play their home games, guests wandered exhibits. That’s Willy Roy (Class of 1989), his face reflecting back off the glass as he admired five of Billy Gonsalves’ eight Open Cup medals, found forgotten in an unmarked Ziploc bag and restored to a high shine. Willy, now 75, never won one, but he scored twice in the Open Cup Final of 1965 for Chicago Hansa. He’s at the Hall with three generations of his family, his granddaughter in an old jersey of the Chicago Sting, the team Willy coached to two NASL crowns.

There’s the Women’s World Cup trophy over there. Olympic medals too. Gold, even. There’s the Dewar Cup, 106-years-old, behind glass in a room full of tables and chairs set as if for a grand wedding reception. And it’s that kind of day, too. That sense of honor drifts on the air. Celebrating something worth the effort. Yes, it’s a Hall of Honor too.

And it’s a Hall of Remembrance. For the inductees of the Class of 2018, they remembered the ones that got them there. Their families in attendance – parents and aunts and uncles and cousins. Old coaches too. Anson Dorrance (Class of 2008) introduced Cindy Parlow (now Parlow Cone). Ed Hynes, son of the late Jackie Hynes traveled from New York to the Hall’s opening. He brought with him the pocketful of coins his dad carried the day he was wounded by shrapnel at the Battle of the Bulge. They’re dented and damaged, like Jackie’s legs were in the fighting. In all, more than 140 players from the old American Soccer League (ASL) served in World War II.

“No one gets here alone and it’s hard not to smile on a day like this,” said Brad Friedel, big as a grizzly bear, beneath a long list of names ringing the rafters. The list immortalizes each and every member of the Hall from its first induction Class of 1950. There’s Alex Ely up there of the old Philly Ukrainians and Archie Stark, as tough a brawler as he was a player. There’s Des Armstrong and Michelle Akers.

Friedel, a titan of the American game, sat at a table with old teammate John Harkes, wearing his red blazer from the Class of 2005. And they’re both a step away from the right boot Paul Caligiuri wore to fire the only goal against Trinidad and Tobago on November 19, 1989 and send the U.S. back to a World Cup for the first time in 40 years. There’s connections around every corner here.

There’s Tiffeny Millbrett, the tiny Women’s National team spitfire, always going a 100-miles per hour trying to find a way to goal that wasn’t there a split-second earlier. She gave the night a touch of humor, always needed in among the remembrances and earnestness. On the way back to her table, she stepped over the ball, built into a glass case in the floor of the banquet hall, that her teammate Brandi Chastain hammered home from the spot to win the 1999 Women’s World Cup. Earlier in the night, former USSF president Dr. Bob Contiguglia (Class of 2018) called that tournament “the most important women’s sporting event of the 20th century.” And he was right.

There was the color and spirit brought by the scores of veteran – executives and players and reporters – gathered for the 50th anniversary of the old North American Soccer League (NASL). They perched on barstools at the nearby hotel. They back-slapped and carried on and relived those wild days of the 70s and 80s. All of the pioneering, the wacky jerseys, the up-by-the-boot straps grassroots-ness of it all.

If former NASL commissioner Clive Toye isn’t the best storyteller in the world, he’s surely in the running. There’s no MLS without that the NASL, folks. There just isn’t. Sporting Kansas City players gathered for pre-game breakfast in the very same hotel on that very same Sunday, and they did well to shake the hands of those who came before, who pulled off the miracle of making professional soccer a reality in America, filling the old Meadowlands and bringing Pele, the best in the world, to play on American shores. Matt Besler and Graham Zusi are looking in the mirror when they stand before Al Trost and Randy Horton, wild-man defender Bobby Smith, Kyle Rote Jr and Johnny Moore, who can trace his time in the American game back to the old LA Scots, through the NASL and all the way to an executive suite in MLS. 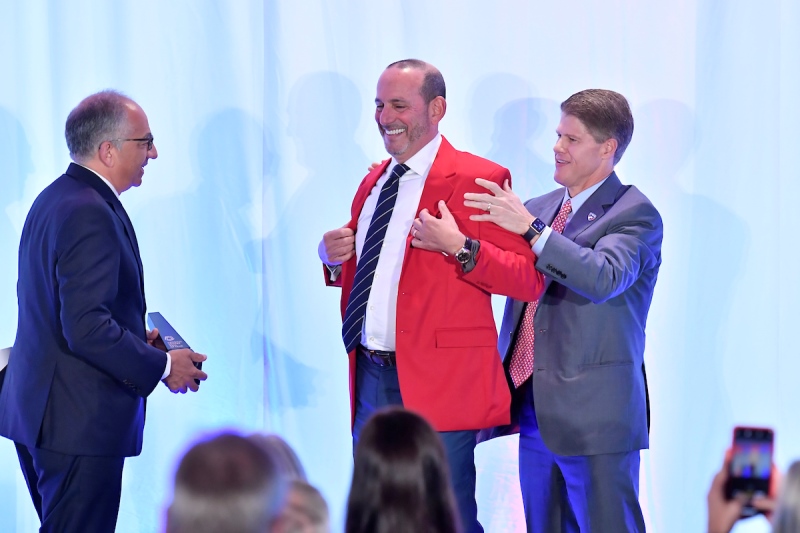 There’s melancholy too, just a little bit around the edges. It’s that last-call sadness, when the tablecloths get pulled away and the day becomes a memory. There’s lingering at the bar, no one quite ready to leave this magical space that hangs like a fog somewhere between then and now. But there’s no need to worry much – there’s space left in that list in the rafters for those yet to join this family of wonder. If you squint hard enough you can see those names coming over the horizon: Howard, Morgan, Lloyd, more even, stretching out as far and long as we care to take care of this American game. It’s a good thing the ceilings are high, because the Hall is forever. It’s for us and those who’ve passed and those who haven’t yet been born.

“’Oh that foreign game’ people say,” remembered Seamus Malin (Class of 2005), with the edges of his Irish accent intact. “But I correct them: ‘no, sir I say. This game here, is American, and it has its own history.” Amen. And that history is here in Frisco Texas as it once was in Oneonta New York. The last glass of champagne is swept up off the bar. A final photo taken in front of the glass cases that protect our game’s treasures. The Hall is quiet now. But it won’t be for long. This Hall is for all. And we, mere mortals, are invited, beginning November 2, 2018 to enjoy its celebration of the beautiful game in America. Go ahead and bask in all that’s reflected there.