Making the Case: Julie Ertz, 2018 Female Player of the Year

On Nov. 20, U.S. Soccer announced the five nominees for 2018 U.S. Soccer Female Player of the Year. This year's nominees are midfielders Julie Ertz and Lindsey Horan; and forwards Tobin Heath, Alex Morgan and Megan Rapinoe. Today, we begin “Making the Case” for each of the candidates, starting with Julie Ertz.

The reigning 2017 U.S. Soccer Female Player of the Year, Julie Ertz had another stellar year for the U.S. WNT in 2018. As a defensive midfielder, Ertz continued to develop in her role and started 15 of the 16 games she featured in this year, playing more than 1,000 minutes for the third time in her career while also scoring four goals to up her international total to 18. She finished the year with 73 career caps. 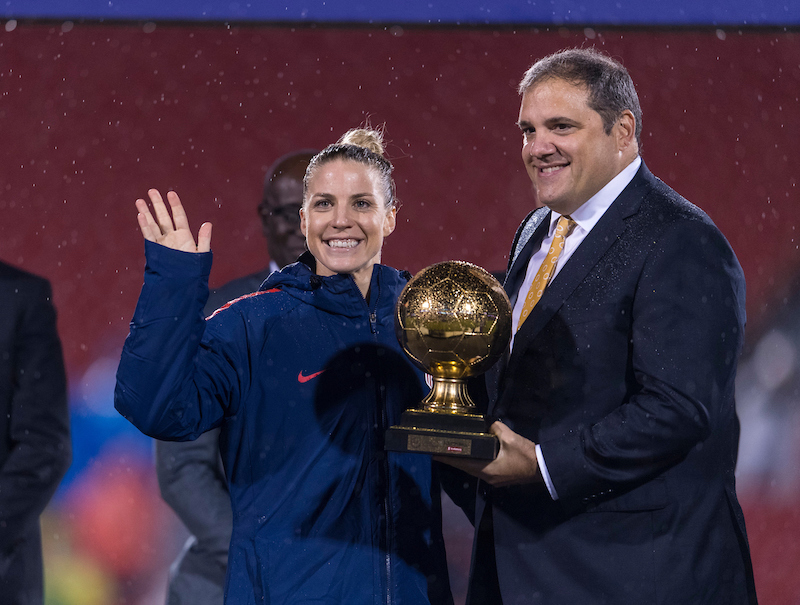 Her impact on both sides of the ball was once again impressive as she combined world-class ball-winning skills with her ability to strike on goal through set plays and from the run of play. She also continued to showcase her overall toughness, a quality that has contributed to making her one of the USA’s most popular players.

Ertz’s consistently impactful presence earned her the highest honor at the 2018 Concacaf Women’s Championship, where she was named the Golden Ball winner as the best player of the tournament. The honor carried some extra significance for Ertz, who four years prior did not play a minute in the 2014 edition of the tournament after she was a late roster addition as a replacement for an injured Crystal Dunn.

While she missed several club games due to injury, she helped lead the Chicago Red Stars to the NWSL Playoffs, playing 1,126 minutes over 14 games, both at defensive midfielder and center back, and was named to the NWSL Second XI. Ertz was also a finalist for NWSL Defender of the Year.