With the hiring of former U.S. international defender Gregg Berhalter as head coach, the U.S. Men’s National Team has set a new course as it looks ahead to the 2019 Concacaf Gold Cup, Nations League and qualification for the 2022 FIFA World Cup.

Here are five things to know about the new USA boss:

Gregg Berhalter was born on Aug. 1, 1973 in Englewood, N.J. and grew up in nearby Tenafly. Notably, he is the godson of former Boston Red Sox player and baseball Hall of Famer Carl Yastrzemski.

A standout in high school, Berhalter went on to play at the University of North Carolina. There he played with more future MNT teammates in Eddie Pope and Kerry Zavagnin, and went on to captain the USA at the 1993 FIFA World Youth Championship in Australia.

His senior international career began when he came on at halftime of the MNT’s 2-1 defeat to Saudi Arabia on Oct. 19, 1994 in Dharan. From there, he served as the youngest member of the U.S. side that finished fourth at the 1995 Copa America in Uruguay. Another injury kept him from making a strong case for himself to go to the 1998 FIFA World Cup, but Berhalter found his place with the MNT the following year, helping the team to a third-place finish at the 1999 FIFA Confederations Cup and making a steady contribution as the side qualified for the 2002 FIFA World Cup.

Having made the final roster for Korea/Japan, Berhalter played in both Knockout Round matches – a 2-0 Round of 16 win against Mexico and 1-0 Quarterfinal defeat to Germany. 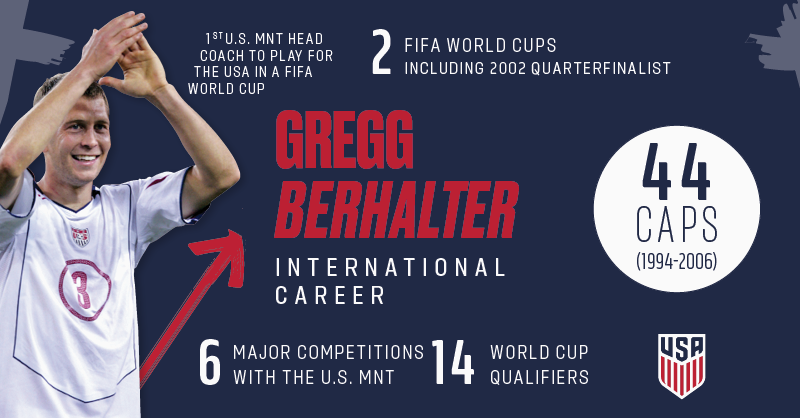 The latter match nearly produced the would be pinnacle moment in his career. Berhalter never scored a goal for the MNT, but if a hand or referee angle had been different he would have tallied one of the biggest in team history. In the second half of the 2002 World Cup Quarterfinal against Germany, Berhalter’s volley was handled on the line by German defender Torsten Frings. Controversially, Scottish referee Hugh Dallas waved off calls for a hand ball, allowing Die Mannschaft to edge by with a 1-0 victory.

Playing at the University of North Carolina from 1991-94, Berhalter said that college soccer helped him adjust to the physical side of the game, but felt he needed a bigger challenge and elected to leave the Tar Heels after his junior season. With Major League Soccer not set to launch until 1996, he looked abroad for his first professional opportunity and perhaps foreshadowed his move into management.

“I knew at the time I wanted soccer to be my life,” he told ussoccer.com in 2002. “Looking back, at the time I did choose a risky path, deciding to leave college early to go to Europe.”

Fortunately, he found a good situation with Dutch Eerste Divisie side PEC Zwolle, where he was drafted into the starting XI straight away in 1994. The signing began a six-year sojourn for Berhalter in Holland, spending two years each at Zwolle and Sparta Rotterdam before winning back-to-back Player of the Year honors at SC Cambuur. 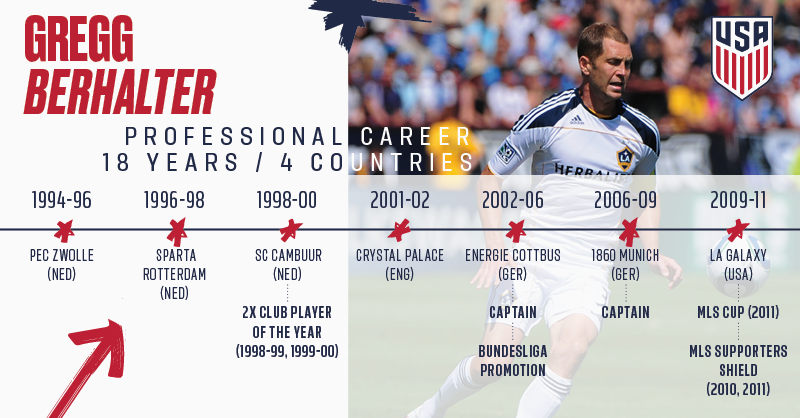 Beginning to find his way with the U.S. Men’s National Team around that time, Berhalter spent a season with English League Championship side Crystal Palace in 2001. Following two strong performances for the MNT at the 2002 FIFA World Cup, he moved back to the continent with German club Energie Cottbus. After helpin Cottbus regain promotion to the Bundesliga, Berhalter moved across Germany where he continued as captain of 1860 Munich for three more seasons. A smart and vocal defender, Berhalter also honed his skills with penalty kicks in Germany, often taking attempts for his clubs.

Always holding a desire to play in the USA, Berhalter returned home to end his career with the LA Galaxy in 2009. That year, he helped the club to the 2009 MLS Cup Final. Despite converting his penalty, the Galaxy fell to Real Salt Lake in a shootout. He helped the Galaxy claim the 2010 MLS Supporters Shield, and while serving as a player/assistant coach in 2011 earned that title along with the MLS Cup to end his career.

An Eye Towards the Touchline

An early student of the game, Berhalter has indicated that his time playing in four different countries informed the way he looked at things, with each stop offering a different experience. In Holland, he kept detailed notes on training sessions and ideas about tactics and positional play. Defensive structure was his focus in England, while he took in the transitional and finishing aspects of the game in Germany.

He began to put some of that knowledge into practice off the field during the end of his career. While playing for 1860 Munich, Berhalter assisted the technical staff in scouting the team’s upcoming opponents. In his final season, Berhalter began applying his years of study, taking up a dual player/assistant coach role with the LA Galaxy in the club’s MLS Cup and Supporter Shield winning campaign in 2011. 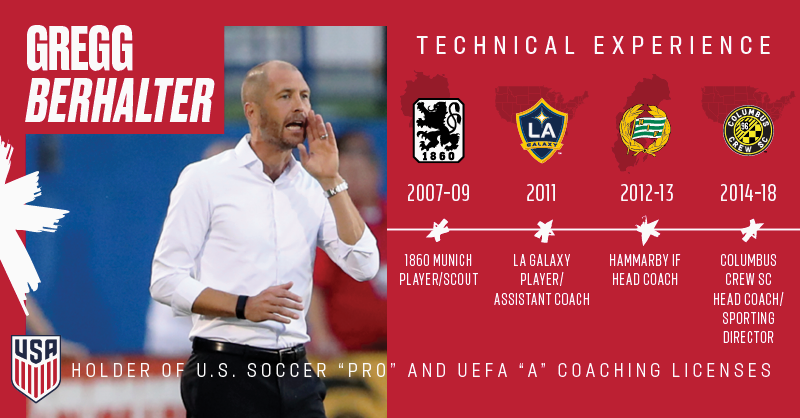 Harkening back to the decision to begin his playing career abroad, he instantly moved into management when he took the reins at Swedish club Hammarby weeks after the Galaxy lifted MLS Cup. There, he managed Hammarby to within one place of the Allsvenskan promotion playoffs in 2012, but returned to the U.S. the following year when he was named Sporting Director and Head Coach of Columbus Crew SC.

A believer in analytics, Berhalter took a detail-oriented approach in managing the soccer operations of Crew SC. He led the small-market club to the MLS Cup Playoffs in four of five seasons, working with a salary budget that ranked in the league’s bottom half each year. He took Columbus to the 2015 MLS Cup Final and within a game of a return in 2017 when Crew SC fell to eventual champions Toronto FC in the Eastern Conference Final.

Berhalter showed to be a leader early on in his international career, captaining the USA as it advanced to the Knockout Round of the 1993 FIFA World Youth Championships in Australia. He continued wearing the armband with that age group as they formed the U-23 MNT going into the 1996 Summer Olympics in Atlanta but was forced out of the competition with an injury just weeks before the opening ceremony. 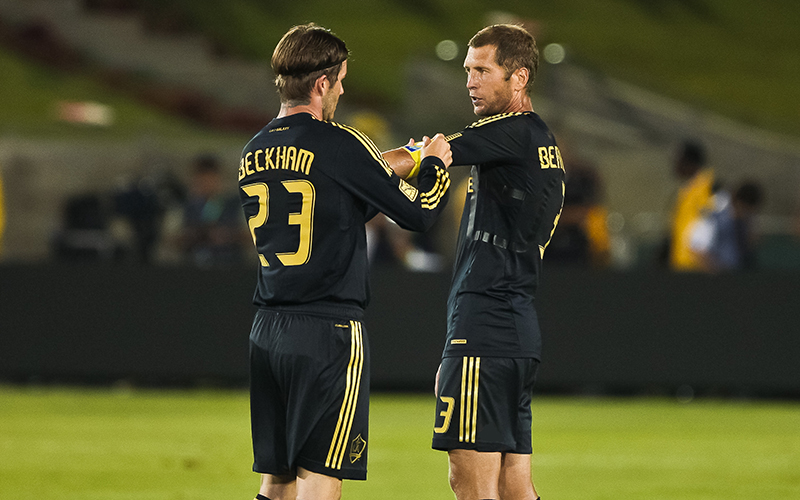 Most notably, Berhalter is one of the few Americans to serve as captain of two European clubs. The veteran center back wore the armband in the final two seasons of his stay with Energie Cottbus (2004-06), leading the club back to the Bundesliga at the end of his tenure there. He continued as captain when he moved to 1860 Munich, spending three seasons wearing the armband in Bavaria.

When he returned stateside with the LA Galaxy, the experienced defender served as a mentor for the Galaxy’s young back line which featured future World Cup player Omar Gonzalez, as well as rising players AJ DeLaGarza and Sean Franklin. The trio of youngsters would serve as stalwart pieces of the club’s successful run from 2009-2014.