A Confusing Rivalry is Born in the OC

Orange County FC and Orange County SC will square off in the 2019 Open Cup’s Second Round in the first installment of what might become a classic American derby.
Michael LewisMay 14 2019
Derbies come in all shapes and sizes.

There are, well, the classics, such as El Clasico where Barcelona clashes with Real Madrid (Spain) or A.C. Milan and Inter Milan (Italy) confront each other in the San Siro Derby or when Arsenal and Tottenham Hotspur tussle in the North London Derby in England.

Back home, there are other rivalries in their nascent stage, which pit established Major League Soccer sides against younger clubs such as the New York Red Bulls vs. New York City FC and LA Galaxy against LAFC. 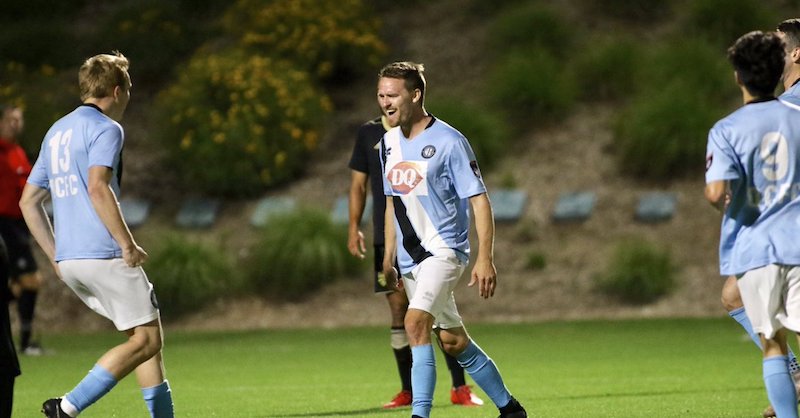 And derbies can happen even at the lower levels of the game.

Two Teams Separated by One Letter
That's right. Soccer fans in Orange County, California will have an opportunity to witness the first meeting of two clubs that have names eerily similar to one another. They will battle in the Second Round of the Lamar Hunt U.S. Open Cup on Wednesday night at 5,488-seat Championship Soccer Stadium in Orange County Great Park in Irvine, Calif. (10:30 p.m. ET; ESPN+).

Both clubs call Championship Soccer Stadium home, although Orange County SC will be the home team on Wednesday. "It's going to create a buzz around Orange County that is a bit unique and should be good," Orange County SC head coach Braeden Cloutier said.

Orange County FC head coach Paul Caligiuri can't wait for the opening kickoff. "This is the David and Goliath scenario, the working class vs. the elite in terms of soccer," he said. "We're a community-based team and they're a professional team. You kind of write the script. This is the total American underdog that people love. 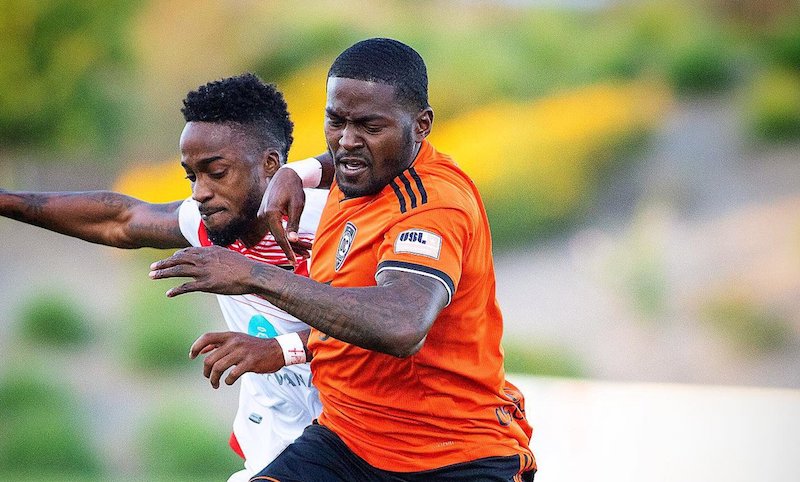 "It's obviously exciting for OCFC to play against a USL team. We share the same venue. This is my third season and we've yet to play each other. We haven't even had a scrimmage or any type of formal relationship. We have seen OCFC has sent players to the professional ranks, the professional club, OCSC. So, we're excited to build our relationship. There's no better way than competing on the playing field."

There is a familiarity on both sides of the ball. "We play relatively in the same neighborhood," said Cloutier, who forged a 20-year career in Major League Soccer, Germany, the USL and indoor soccer arenas. "The thing is what's interesting is that a lot of their players have come through either invitational tryouts or when I coached at a local club here in Orange County after I retired from playing. So, a lot of these kids have come through the youth system here in Orange County. I am familiar with them from when they were 12, 13. There's a lot of crossover.”

Orange County SC midfielder Aodhan Quinn, the son of former U.S. international Brian Quinn and a part of FC Cincinnati's fabulous run to the 2017 Open Cup Semifinals, expects both sides to leave it on the field. "This game is going to matter about bragging rights and who is the best team in Orange County," he said. "Hopefully, it's a good one."

A Derby with No Name (Yet)
There is no official name to the derby, at least not yet. Whether it will be called the Orange County Derby, Irvine Derby, the Battle of Orange County or something else, is yet to be determined. And depending on who you talk to, there is or there is no rivalry.

"It's just neighbors," Cloutier said. "We're both relatively new clubs. We share obviously Orange County in our name. It's a battle of Orange County if you want to put it that way. There's not any bitterness between the clubs because there is nothing to be bitter about.

"When it comes to a rivalry, I don't think it’s been long enough,” Cloutier went on. “We never played against each other to consider it a rivalry. Paul Caligiuri is their coach. We played against each other in the early days of MLS and he's been out here coaching youth soccer. We've crossed paths quite a bit. I have a great deal of respect for him. So, yeah, it's going to be interesting." 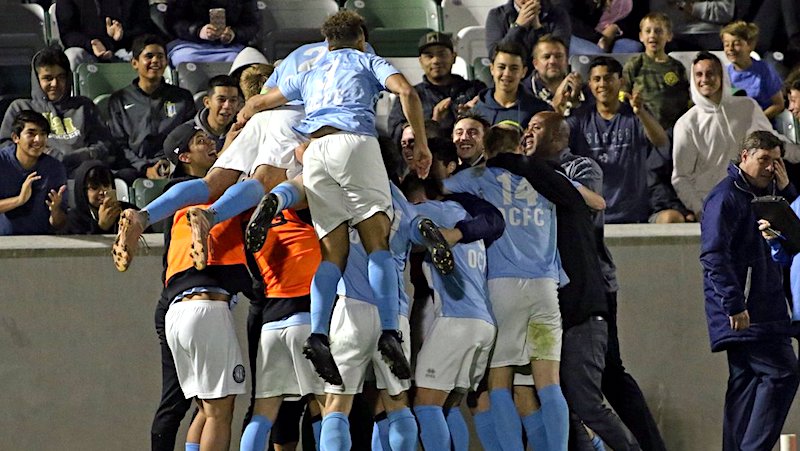 Caligiuri, however, had a slightly different take, perhaps because his team is the underdog from a lower league.

"There is an undercurrent," said Caligiuri, a former U.S. international and MLS standout, best known for scoring the winning goal that boosted the Americans into the 1990 World Cup after 40 years in the international wilderness. "There is an underground rivalry, an unspoken rivalry. It's kind of interesting. You have two teams that share the same stadium. Some players know each other. People get confused going to our games, thinking that they're at [OCSC] games, people are going to [OCSC] games, thinking they're at our games.

"I'm a coach and I know their general manager really well,” Caligiuri added. “We know the ownership. But it's just kind of brewing and it's come to this point. It's super exciting from our standpoint to be the underdog going into a big match – the first-ever rivalry."

Obvious Confusion
Given how close the names are, it has been easy for fans to get confused.

"It did in the beginning," Cloutier said. "My son plays here locally in the youth soccer scene and when people would ask me, I’d have to tell them, ‘no, I’m with the Orange County Soccer Club’. They would get us mixed up from time to time but I think as our club has grown and the USL has grown, everybody understands the differences between the two."

But apparently, that’s not always the case.

Caligiuri remembered when the family of an Orange County SC player showed up at his game. At the time, his side played at a nearby field. "They stayed and they said it was enjoyable. They came back and they enjoyed the level of play," he said. "Other than that, I am not too sure of other bigger examples, but it does happen. I hear from the front office they get that a lot and I am sure there's a lot of confusion."

Here's little background on Orange County SC that could help ease the confusion for each side.

Orange County SC, which traditionally wears black with orange trim, was founded by Iranian American businessman Ali Mansouri and started out as the Los Angeles Blues in the old USL Pro division in 2010. Four years later, the team was renamed the Orange County Blues FC before businessman James Keston purchased the club and rebranded it Orange County SC in 2017.

Impressive form for OCSC
Last year the squad finished atop the Western Conference with a sterling 20-8-6 mark before falling to Phoenix Rising in the conference final of the USL playoffs.

The team hasn't fared as well in 2019, residing in 12th place in the 18-team Western Conference at 3-3-4 after coming off a scoreless draw at San Antonio FC on Saturday, May 11. "We got off to a slower start than we would have liked," Quinn noted.

Orange County FC, which has baby blue and white as its colors, has been kicking a soccer ball since 2009, when it competed in the SoCal Premier League until 2016. The club joined the NPSL for the 2016 season and competed in the 2018 U.S. Open Cup. Iranian-Americans Nader Dejbakhsh, Carmel Dejbakhsh and Dara Dejbakhsh are its co-founders and co-owners.

The team sits in second place, two points behind FC Golden State in the Southwest Conference with an 8-2-2 record after a 3-1 home win over Oxnard Guerreros FC last Saturday. John Ryan Holland, Joshua Bynoe and Dakota Collins scored in the second half. Forward Blake Frischknecht was named NPSL player of the week after contributing three goals and one assist in a 5-2 win over City of Angels FC on May 4.

“It'll be a great game,” Caligiuri said. “I know enough about that team, their tendencies. I don't think they can deviate from it this late in the game. They practice every day, we don't. We're blue-collar guys. We work jobs and come home, and the players practice late at night a couple of times a week.”

Both teams have set their sights on victory and beyond, as in continuing the dream of meeting up with the Division I big boys.

Planting in a Flag in Orange County
"It sets the mark for Orange County on who the top professional team is in the community and kind of lead by example," Cloutier said. "It's a situation where they [FC] can play free and with no pressure because they know they're the underdogs. We think we have a good enough team that if we can get through the first couple of stages of this competition, we have a good enough and deep enough squad to compete against an MLS team on any given night. If we can pick off a couple a couple of MLS teams, we can make a name for ourselves in this competition and not just within our own league. We can really start having people identify who we are."

Caligiuri obviously would love to see his Orange County FC move on. "Of course, it becomes a great big deal [if FC wins] and of course, the next game becomes even greater," he said. "That's what’s beautiful about the Open Cup. 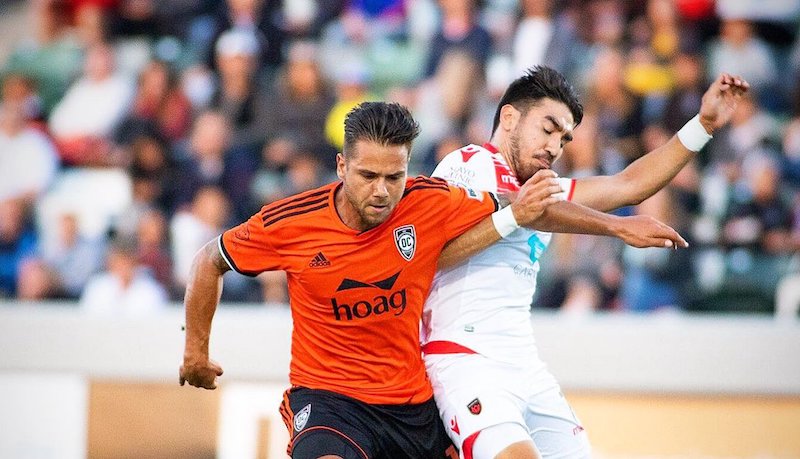 "If this story got outside of our soccer community, it's a great story because there's nothing like it in any American sport. I don't think Americans generally understand what we're facing,” the former USA legend continued. “If we win, we could be playing against the Galaxy or LAFC. You can't really say its minor league baseball against major league baseball because it's even below that. It's a community-based team that anyone can form, and you could have a recreational team that could end up [playing against pros]. It's very unique.

"Here we are with the challenge and we're grateful to be in this position,” Caligiuri continued. “Hopefully, we do something very unique on the playing field and it adds to the soccer culture that we're looking for."

Who knows? Perhaps the derby will spark some interest and become an annual affair.

"Maybe there is a little more media interest just because it is the two teams in the area and it hasn't happened yet," Quinn said. "Hopefully, we can put on a good game and make it entertaining for the fans. Maybe it's a thing that happens every year from now on."