Cup Take-Two for Hot & His Motown

Sacir Hot – a former New York Red Bull player and scout, current fulltime student and devoted coach of NPSL amateurs FC Motown – has a clever plan in mind to get the better of NYRB U-23 in the First Round of the 2019 Open Cup.
Michael LewisMay 4 2019
Open Cup

Head coach Sacir Hot is getting the feeling that the theme of FC Motown's Lamar Hunt U.S. Open Cup experience is "Same time, next year."

Last year the National Premier Soccer League (NPSL) team tussled with the New York Red Bulls' Under-23 squad in the opening round. And guess which teams will bump heads again in the first round in 2019?

Yep, FC Motown and Red Bulls U-23 at Montclair State University on Tuesday, May 7 at 7 p.m. ET. 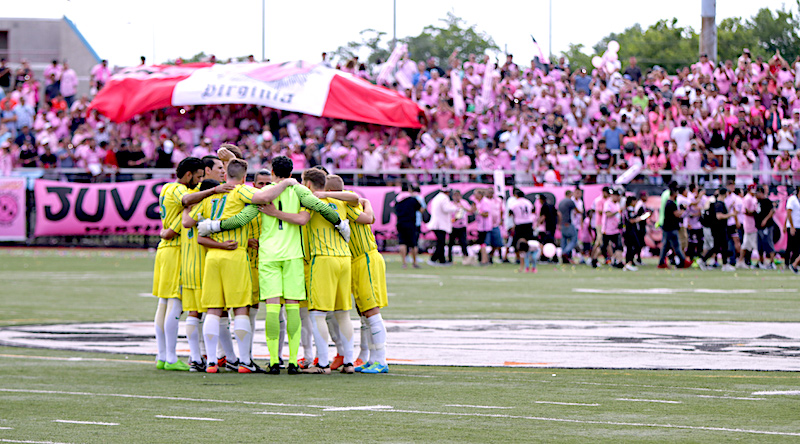 (FC Motown, of Morristown, NJ, are back in their second straight Open Cup)

"I figure the most reasonable match-up would be us playing against the Red Bulls Under-23 because we're geographically close," Hot said. "It aligns with the PDL [now USL League Two and the NPSL [National Premier Soccer League] playing against each other. I don't think it will be the second or the last. I think that there's going to be plenty of more Red Bulls vs. Motown."

Making it a two-peat won’t be easy for Motown.

"Flashing back to last year’s game, RBNY is a professional organization, class, and have players that are currently starting for the first team in the MLS," Motown striker Chris Katona said. "They aren’t a team to take lightly and will be prepared and look to avenge last year’s loss. We stuck to our game plan and fortunately enough we were able to execute off their mistakes in the back to finish the game."

In 2018, Motown Coach Hot found himself stuck in the middle of things because he was a Red Bulls scout. He had to watch what he said at Red Bulls meeting. But he has cut back on scouting responsibilities since he has returned to college.

"I guess you can call me a pseudo-scout because I just have so much going on," he said. "I've been weaning off that role because [the Red Bulls] brought in a few other scouts. I'm a fulltime student now. There are just so many hours in the day that I can contribute to scouting. If I come across some players here and there, I'm sending them to the Red Bulls. Yesterday I was on the phone with the Red Bulls U-12 coach, Zach Herold, and we're talking about players and trying to get some players over." 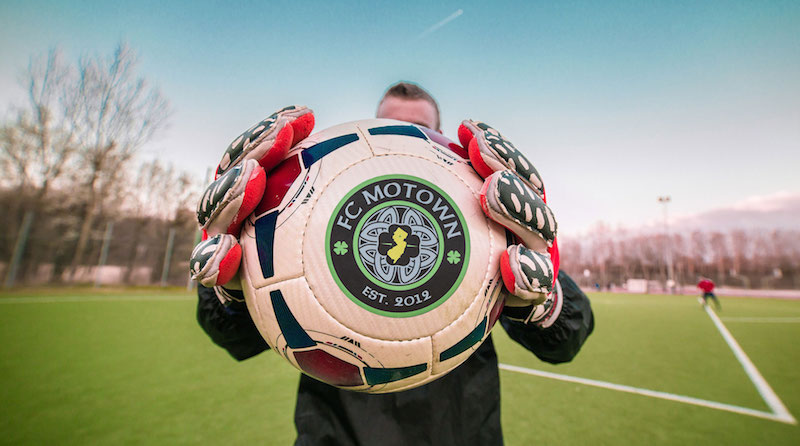 In 2011, Hot became the fourth Homegrown Player signed by the New York Red Bulls. He was released by the club the following year, but he held no grudges. “I feel everything happens for a reason,” said Hot, a native of New Jersey born of Albanian and Bosnian parents. “I don't regret signing at all and I loved it. Even though it was a short stay, it opened doors for a lot of things in my life. I was 19-years-old, and I was playing with Thierry Henry and Rafa Marquez!”

Hot, who is only 27, is respected and beloved by his players.

"His soccer passion and IQ are well beyond his years," said Katona. "Hopefully he can land a job in the MLS or in professional soccer at some point in his future career. Someone would get a great coach! I am a big fan of him, a true professional. Everything he goes about in preparing for a game, scouting, game tactics, advice, etc., just makes it easier to be a player to grow and learn from."

And there will be plenty to learn this year.

If Motown defeats the Red Bulls U-23's, the club will host Memphis 901 FC (United Soccer League Championship) in a Second Round encounter at Ranger Stadium on the campus of Drew University in Madison, N.J. on May 15 at 7 p.m. ET.

It would mean the team would play four games in 12 days with Motown opening its NPSL season against fellow 2019 Open Cup participants Philadelphia Lone Star at home on May 11 and a league road match at the Electric City Shock in Scranton, Pa. on May 18. 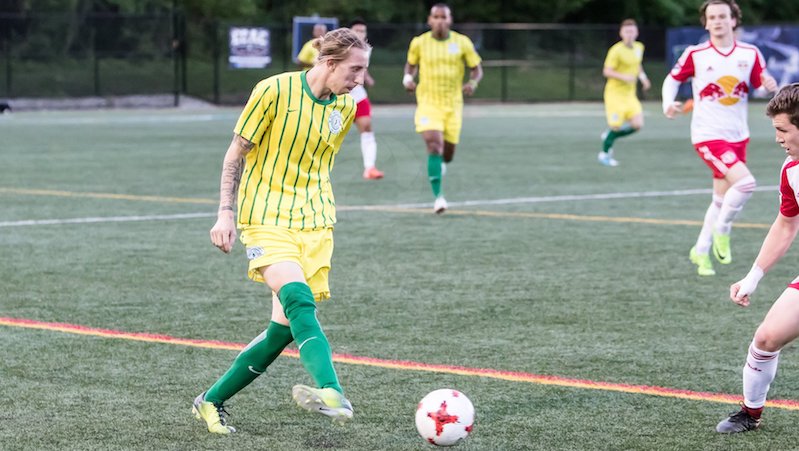 (Chris Katona is a goal machine, with 18 in NY's Cosmopolitan League where he also plays for Cedar Stars)

"It's a tough beginning," Hot said.

To deal with it, he’s devised a strategy.

"We don't have the luxury of our guys being super in-shape fit, and ice packs and yoga and stretching like a professional team does," he said. "After games when I was with the Red Bulls, after 90 minutes you get a nice massage, you get an ice bath, you get stretching out. Our guys don't have that. How we try to combat is by having a little bigger roster. So, we'll use that roster to our full advantage and we'll plan out the 18 for every game. We'll make sure we manage our guys' minutes correctly so that we'll get the most out of them. That's how we compensate."

One advantage is that many of the players performed together in the NPSL offseason with Cedar Stars Academy in the Cosmopolitan Soccer League, one of the best amateur leagues in the USA. 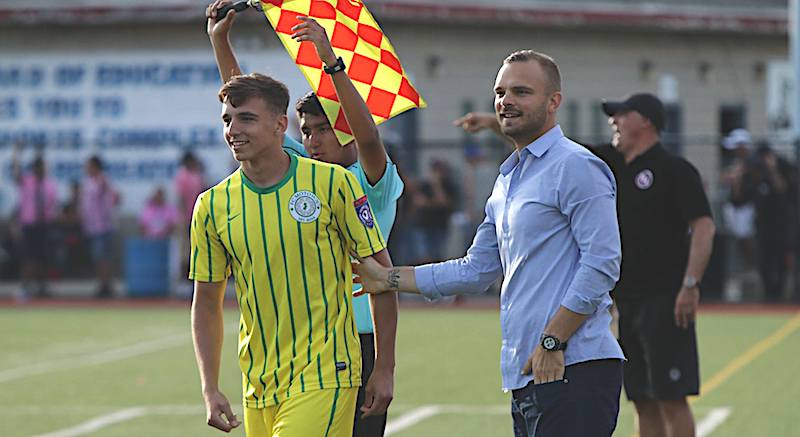 (Sacit Hot - right - has a lot on his plate at present, but he's aiming for success in the Open Cup)

"Playing for Cedar Stars year-round has helped me transform my game and be able to work on the little things I feel like I can grow to get better to help the team win," he said. "Leading the CSL in goals and assists again this year is rewarding to know that I’m contributing to our team’s success. Our goal is to win a title after receiving an unfortunate call that cost us the title last season. At the end of the day, they are just stats/numbers, but I prefer to be on the winning side, whatever it takes."

One disadvantage is the team's fitness to compete against teams at a high level and sides that train more. Since FC Motown players have nine-to-five jobs, training time is at a premium. Usually, it's once a week. Twice is a luxury.

"Our biggest factor and biggest success would come from our fitness," Hot said. "I think our guys are talented enough to make it far enough in the Open Cup. I just feel like our fitness is what kills us in going further in the Open Cup."

Case in point: when FC Motown played the New York City FC U-19 team in February and came away with a 2-1 defeat.

Hot claimed the final score hardly told the story of the match.

"We couldn't catch their shadows," he said. "They were so much better but that's because we're so unfit at that point of the year. Guys are coming off Christmas, the holidays. You can't play outdoors. We don't train. We don't actually get going until June, July, August, when the NPSL is towards the end, when the playoffs start. That's when guys will have 30 games under their belt, and they'll have training under their belt."

A major disadvantage is that FC Motown will be without Duka, the key to the team's attack and run to the 2018 NPSL final. Duka, a former Major League Soccer player, signed with Partizani Tiranain in the Albanian Superliga in the offseason.

"I feel like there's no replacing Dilly," Hot said. "Dilly's in his own bracket. He used to take games over by himself at will. What we're trying to do is beat them with numbers. We're just going to be better as a team this year, trying to gel better together and try to beat each opponent with 11 players, whereas last year Dilly beat a team by himself with one or two individual plays." 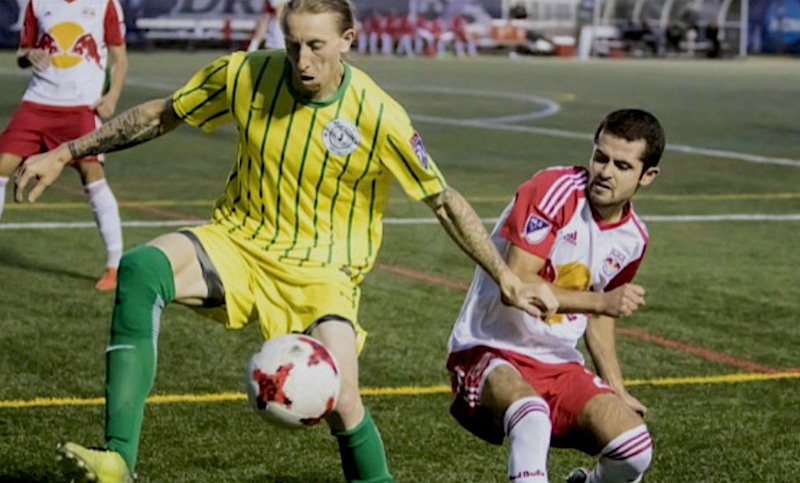 Having reached the NPSL championship game before losing to Miami FC 2 (3-1) last August, Hot figured his club will have that proverbial target on its back. "I think it's going to be harder this year," he said. "In any sport, staying at the top or getting to the top is two different things."

He then cited New England Patriots quarterback Tom Brady, who has won the Super Bowl six times. "You ask him what it’s like the first year and the sixth year and he'll always tell you that after the first year the hardest part is getting back to the final the second year," Hot said. "I think teams will be well aware of what we can do. And games are going to be harder. We're going to have a target on our backs this year. Teams are going to try to play their best soccer against us. I told our guys, ‘This is going to be a helluva ride this year.' If they thought that last year was fun and easy, this year is going to be ten times harder. I think our guys are up for that challenge."

As usual, Hot has plenty on his plate this year. He’s returned to school to finish a four-year degree in exercise science at Montclair State. He left Boston College as a sophomore to pursue a pro career with the Red Bulls in 2011.

Hot said his area of study was "not the easiest."

"It's kind of tough, with all of the anatomy and scientific stuff behind it," he said, adding that he could complete his final four semesters in a year.

So, his job as a project manager for a civil construction company in New Jersey has been put on hold. "I can always come back to it," Hot said. "I just coach for Motown and keep it simple. I've saved up enough where I can sacrifice a year or two of working. Just full-time student and the Motown thing. I'm getting by."

Now, that's not something FC Motown and Sacir Hot are planning to do this year.