Brian Rapinoe has newspaper clippings of the Women’s World Cup bracket taped to the wall of his prison cell.
Gwendolyn OxenhamJune 14 2015

There are no pictures of his family. “When you look at your pictures, it hurts,” he says. "If you’ve got ‘em up on the wall, you’d look at them all day, and you don’t want to hurt all day long.”

But the soccer games; that’s something different, that’s a distraction. His sister is Megan Rapinoe, left mid for the U.S. National Team, and everybody in prison – the deputies, the inmates, the doctor – knows it. Megan, known as “Pinoe,” has platinum blonde hair; Brian has a mohawk. Megan has two discreet tattoos - “nature ran her course” on her inner bicep, and an Arabic script that translates to “trust yourself” on her wrist. Brian’s tattoos creep up his neck, behind his ears, down his arms, chest and back. Hairstyle and body décor aside, they look identical. “Sometimes I look in the mirror and see him,” says Rapinoe. Their eyes, nose, smile, and charisma are the same.

They grew up together in a giant familial clan in rural California – six siblings and dozens of cousins traipsing through the countryside. Megan and her twin sister Rachael were the youngest. Brian was the next up in age, five years older.

“He’s funny and charming and lovable, the kind of guy everybody wanted to be around,” says Rapinoe. The twins followed him everywhere, running after the chickens, tramping through the woods, riding bikes across the fields. Brian’s the one who taught them how to fish for crawfish in the creek, luring the small crustaceans into a bucket via bacon and chunks of hot dog.

He’s also the one who got them into soccer. He played first, and their mother Denise coached his team. “She didn’t know squat about soccer, still doesn’t,” laughs Brian on a phone call from the Vista Detention Facility. “The only thing my mom knows about soccer is how to paint soccer balls on her fingernails.” But she went out there and tried anyway. And Megan and Rachael were the three-year-olds along the sideline always chasing after the ball. The family lived across the street from a church with a big soccer field, and everyday Brian would take them over there - the nine-year-old showing the four-year-olds how it was done.

While Rachael was shy, Megan was more like Brian: she liked to crack jokes, she didn’t mind being center stage. “I idolized him,” says Rapinoe. “I wanted to do whatever he did.” If he got a bowl cut, she got a bowl cut. If he walked around shirtless, Megan walked around shirtless. He loved to play; she loved to play. He wore jersey No. 7; she wore jersey No. 7. He played on the left wing; she played on the left wing.

“Megan and Rachael followed me in some ways,” says Brian. “But I’m really glad they didn’t in others.”

Megan has a clear memory of the day her parents sat her and Rachael down at the kitchen table and told them, “Your brother got arrested for bringing meth to school.” Brian was fifteen; they were ten. Brian has battled drug addiction since then – first meth, then pills, then heroin and has been in and out of prison his entire adult life.

“There’s no other heartbreak that I’ve ever been through like that,” says Rapinoe. “Going through that basically from the age of 10 was really hard. For a long time you blame yourself, you think, ‘What can I do,’ and you’re mad at him, but his addiction is not really about you. He’s not doing the things that he’s doing in order to hurt us – that’s just a byproduct. It took me a long time to wrap my head around that.”

Brian reflects, “Drugs make you selfish. I thought, ‘It’s my life. I didn’t steal, didn’t mess with anyone, so what are you guys tripping on?’ But that’s not how it works. I put them through long, long nights. With no regard to any of them.”

“Watching what Brian went through scared the crap out of Rachel and me and brought us together,” says Rapinoe. For both Rachael and Megan, soccer was a release, “That was how we got away from it.” They both excelled on the field and stayed out of trouble and away from the drugs that are common in rural California.

The twins witnessed their parents’ constant worry and their intense efforts to save their son: rehab programs, military school, juvenile detention center. Both parents worked, their father doing construction during the day, their mother waitressing at night. “And while they’re dealing with our brother, they’re taking us to soccer all the time,” remembers Rapinoe. “Spending all their money on his rehab and our soccer. It’s kind of incredible what they were able to do for us.”

“Any time I have a sense of accomplishment, it totally feels likes it’s a family thing, like we all did it.” Both twins went to the University of Portland on soccer scholarships and won the 2005 national championship. After a knee injury, Rachael’s playing career ended, but she’s stayed in the game, running camps for kids (Rapinoe Soccer Camps) and is a Darfur United Coach Ambassador, working in Chad to help create a soccer academy within Darfur’s refugee camp. 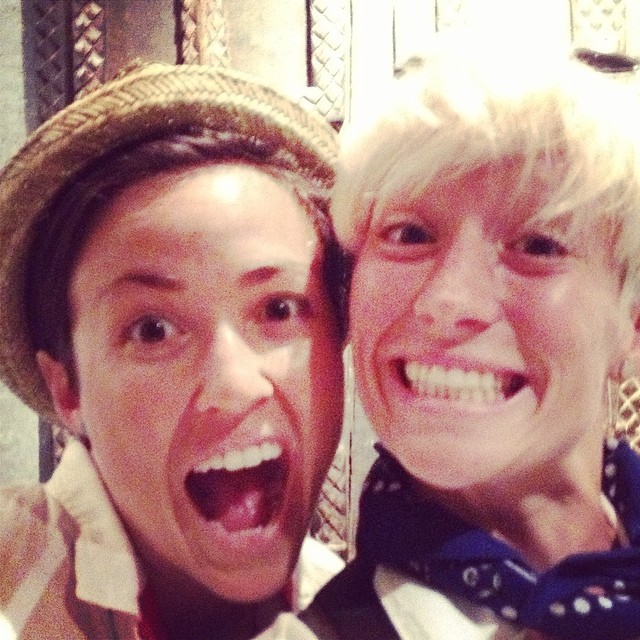 Megan Rapinoe (right) with her twin sister Rachel, who also played with the U.S. Youth National Teams before a knee injury ended her playing career.

Brian has spent ten of his thirty-four years in prison. He has eight months to serve on his current sentence. “I can’t even believe I’ve done all this time,” says Brian. “It blows my mind that I keep doing drugs and continue to sit here. I’m not a bad person; I just make really bad decisions. I’m a drug addict.”

Brian had a son named Austin during one time he was out of prison. “I haven’t been there for him,” he says. “I was there from when he was born until he was three but then I was gone.” His parents raised Austin, who idolizes Megan and Rachael in the same way they idolized Brian. “They’re his role models,” says Brian. “And I’m really glad he’s going down the path they took, not mine.”

Megan and Brian have stayed close, “I think we’ve even gotten closer,” says Brian. They write each other letters.“She’s the only one who can write me letters that make me cry,” says Brian. “She tells me what’s going on, gives me credit for way more than I deserve, tells me she loves me no matter what. I showed one letter to my homeboy and he was like, ‘Damn.’”

In prison, Brian says, “Women’s soccer is huge. In every place I’ve served time, we love it.” And while he’ll occasionally get a guard who won’t turn on the game, he’s never missed an Olympic or World Cup game. “All my homeboys – black, white, Hispanic, everybody – we cheer loud.”

Currently, Brian, a non-violent offender, is serving the remainder of his sentence in a county jail. Because he was active in prison culture in his early prison days, and has an influence over other inmates, he’s kept separate from the general population. He’s in Level 5 security and has his own cell. The TV is out in the hall, about fifty yards away. “I’ve got ingenuity,” says Brian. He has stacked 60 books, as tight and as compact as possible, tied together with strips of torn sheet. He sits on the book column and watches the game through the window in his door. All sixteen inmates on his block will be watching; so will the guards. “We get fired up, we’re loud, we’re hitting doors,” says Brian.

Since the 2015 World Cup began in Canada, the center-stage quality Pinoe shares with her brother has been in full effect. In U.S. coach Jill Ellis’s words, Pinoe “thrives in big games, big moments.” On Monday, June 8, she scored two goals to lead the United States to a 3-1 win over Australia. On Friday, in a 0-0 tie against Sweden, Pinoe’s effort did not result in a U.S. goal, but her first touch, in-swinging crosses, playfulness, and imagination on the ball were highlights of the game.

During both matches, in the Vista Detention Facility, the 16 inmates in Brian’s block were banging the bars, cheering loudly for Brian Rapinoe’s kid sister. “She’s so awesome. I love it,” says Brian. “I just wish I was watching from out there instead of in here.”

On Tuesday, June 16, the U.S. will face Nigeria, and Brian will again be perched on his tower of books, pulling for Megan.