Five Things to Know: St. Vincent and the Grenadines

A New Place to Play
Friday’s match against St. Vincent and the Grenadines is the USA’s first game in the Caribbean nation and marks the 70th different country the MNT has played in since its inaugural in Stockholm, Sweden on August 20, 1916.

The last time the MNT made its first stop in a new location came a little more than two years ago, when political strife in Ukraine forced the USA’s friendly there on March 5, 2014, to be moved to Lanarca, Cyprus.

Side note: The MNT has played 96 different nations since its first match in 1916.

How many can you name?

About St. Vincent
Sitting in the Windward Islands section of the Lesser Antilles, St. Vincent and the Grenadines is one of the eastern-most nations in the Caribbean. The main island of St. Vincent is where Friday’s match will be played, but the country is made up of 32 islands in total.

A 2013 census estimated the country’s population at approximately 103,000 people. For reference, that is roughly the same size of San Mateo, Calif., or Tyler, Texas.

While football is popular here, like much of the Caribbean, cricket is king in the islands. Arnos Vale Stadium, where Friday’s World Cup Qualifying match will be played, is primarily a cricket ground and one of the home venues for the Winward Islands Cricket Team (a combined team making up St. Vincent, Grenada, St. Lucia and Dominica).

Football History
Known as Vincy Heat, the football team has never advanced past the semifinal stage of CONCACAF World Cup Qualifying, but considering the size of the nation and that many of their players have regular day jobs, the fact that they’ve made it this far a number of times is impressive.

Hendrickson is now the head coach of Seattle Sounders FC 2 and was helping Vincy Heat as an assistant when the two sides met last November in St. Louis. Check out our chat with Hendrickson about his nation’s footballing history prior to that matchup. When the U.S. MNT and Vincy Heat last met in St. Louis, Missouri to open their respective World Cup Qualifying campaigns,
Oalex Anderson gave the visitors an early lead in what turned to a 6-1 U.S. route.

Last Time Out and A Look Ahead
Though they’re eliminated from advancement to final round of CONCACAF qualifying for the 2018 FIFA World Cup, St. Vincent has proven to be difficult to beat in this round.

The match against the USA last November saw Sounders FC 2 forward Oalex Anderson give St. Vincent a 1-0 lead before the MNT rebounded to a 6-1 win. In St. Vincent’s qualifier in March against Trinidad & Tobago, Myron Samuel gave the side a 1-0 lead with a 45th minute penalty kick. After T&T went ahead, Shandel Samuel pulled things level for St. Vincent in the 77th, although the Vincy Heat eventually fell 3-2.

While St. Vincent is eliminated from advancement to the final round of CONCACAF qualifying, the U.S. still has all to play for. Take a look at how the MNT can qualify for the final round on Friday and what it would be for Tuesday’s group finale vs. Trinidad & Tobago.

Island Travel  and #USAvVIN a Huge Event on the Island
Wednesday’s travel itinerary to St. Vincent began with a stop in Barbados before taking three propeller planes for the last leg of the journey to Kingstown. The first two planes carried players and staff, while the third was to carry the team’s equipment and remaining staff. Just as everything was loaded up, the pilot discovered the plane’s battery was dead, which necessitated the return of the first two planes to pick up the rest of the party and gear.

A long, hectic day of travel, combined with heat, unpredictable wind and rain, as well as the bumpy playing surface all make Friday’s clash at St. Vincent more challenging than it may appear on paper.

To spice things up, the government of St. Vincent declared a national half-day holiday on Friday so citizens of the island nation could attend the match. Despite being eliminated from World Cup Qualifying, the country’s Football Federation has also pushed the match as a huge event (see poster below), even holding a press conference last week to describe the extra details involved with hosting the U.S. Men’s National Team. 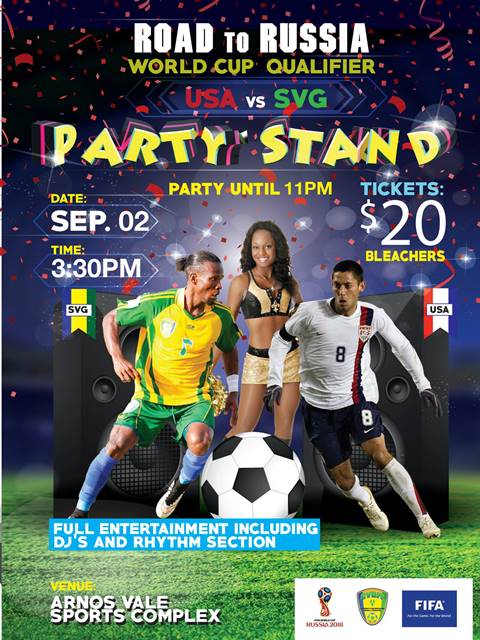