One of the more enigmatic personalities in the MNT player pool, Julian Green announced his return to the U.S. Men’s National Team picture by scoring in each of the team’s October friendlies against Cuba and New Zealand.

The MNT attacker moved from German giants Bayern Munich to second division side Stuttgart on Dec. 21, in a bid for more playing time and to help Die Roten earn promotion back to the Bundesliga.

Here are five things to know about the 21-year-old attacker:

Munich by Way of Tampa

Green was born in Tampa, Fla. to an American father and German mother in 1995. At age two, his mother moved with him back to Germany, where the future MNT attacker spent his formative years.

Growing up in a soccer-mad country, Green proved a promising prospect with youth clubs FC Miesbach and SG Hausham before stepping up to join the Bayern Munich Academy as a 15-year-old in 2010.

As he thrived in the club’s development system, Green began to receive invitations  from German youth national teams, playing for both the U-16 and U-17 sides in 2011. Owing to his American heritage, Green also began receiving overtures from the U.S. U-18 MNT the following year and scored in a 4-2 friendly victory against the Netherlands in September 2012.

Having signed a professional contract with Bayern Munich as an 18-year-old in 2013, the rising prospect represented Germany during qualifying for the 2014 UEFA U-19 Championship that fall. His participation in that tournament meant that he was provisionally “tied” to represent only Germany in international competition. Despite this, U.S. head coach Jurgen Klinsmann kept up his pursuit to have the American-born attacker wear the red, white and blue, and the budding attacker eventually filed for a one-time change of associations with FIFA, which was approved March 24, 2014. 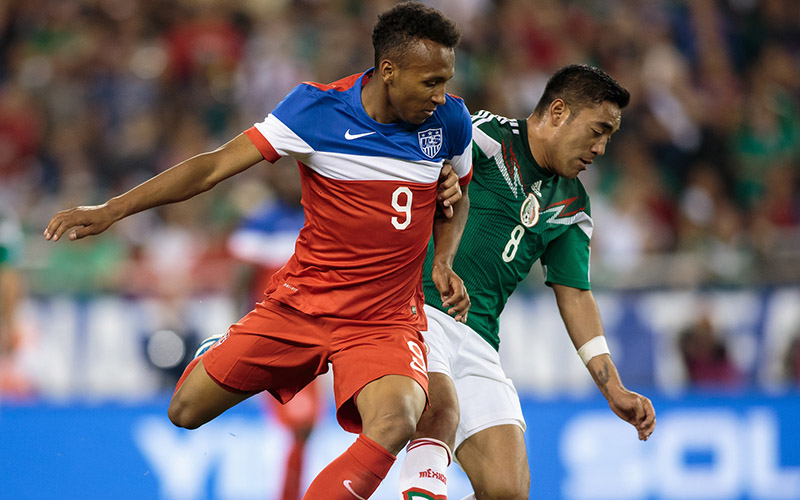 Speaking about his final decision to represent the United States, Green said, “Obviously this was a big decision, and I spent a long time discussing it with my family. I was born in Florida and my father still lives there, so I have deep roots in the U.S. I’m very proud to be representing the United States.”

Two days later, Green received his first official call-up for the MNT and made his international debut as a second-half substitute against Mexico on April 2, 2014 in Glendale, Ariz.


World Cup and "The Goal"

On May 22, 2014, Green was somewhat surprisingly named to the 23-man squad that would represent the United States at the 2014 FIFA World Cup. With just one cap to his name and turning 19 days before the start of the tournament, Green was the youngest player named to a U.S. World Cup roster since 18-year-old Joe Martinelli was part of the MNT squad at the 1934 FIFA World Cup in Italy.

An unused sub as the U.S. navigated a difficult group featuring Ghana, Portugal and eventual winners Germany, the youngster was thrown into the fire during the MNT’s Round of 16 match against Belgium. Riding Tim Howard’s impressive performance into extra time, Belgium scored two in the first half of the first additional period to put the United States on the ropes. 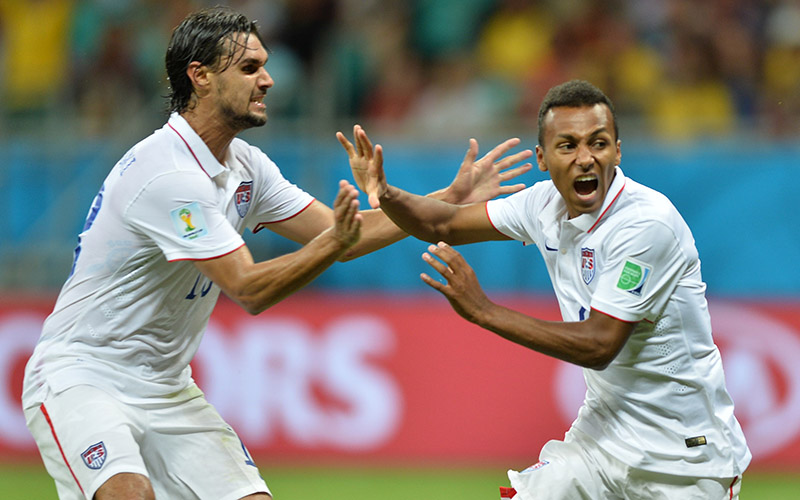 Needing goals fast, Green was inserted in place of Alejandro Bedoya at the end of the first 15 minutes of extra time. It took just two more minutes for him to make good on the swap as Green impressively volleyed home Michael Bradley’s lofted ball in the 107th minute. The quick goal made Green the youngest MNT player all-time to appear and score in a World Cup match, but it wasn’t enough to keep the U.S. team alive, as they exited the tournament with a 2-1 defeat.

Returning to Bayern Munich and Loan at Hamburg

Coming off his memorable strike at the World Cup, Green returned to Bavaria where he was named as part of Bayern Munich’s first team squad for the 2014-15 season. Still young, he found it hard to gain playing time with the German giants and was sent out on loan to fellow Bundesliga club Hamburg at the start of 2015.

Things didn’t necessarily go according to plan with HSV, as Green played sparingly during his loan stint and returned to Bayern following the season. Without much in the way of first team minutes, call-ups for the senior MNT stalled, but Green still found time with the U.S. U-23 side while playing mostly with Bayern Munich’s reserve team through 2015-16.

With his last full MNT cap coming at the end of 2014, Green was recalled to the U.S. team for a friendly against Puerto Rico back in May. While the camp did feature National Team regulars Brad Guzan, Bobby Wood  and John Brooks, the week of training leading up to the match was deemed as a transitional camp for Copa America Centenario and included a number of first-time call-ups as well as players in similar situations to Green.

While it seemed his 63 minutes against Puerto Rico would be his sole action of 2016, Green made headlines again in August when he scored a hat trick for Bayern Munich in a preseason match against Inter Milan in Charlotte. Training everyday with the likes of international stars Arjen Robben and Franck Ribery, Green has continued to find it difficult to get time on the field for the club, but has still consistently made the match day 18-man roster.

While it seemed his 63 minutes against Puerto Rico would be his sole action of 2016, Green was a late call-up to the MNT’s October camp, replacing Alejandro Bedoya for friendlies against Cuba and New Zealand.  Like Sacha Kljestan a month earlier, Green made the most of his chance, contributing to both goals in the MNT’s 2-0 win against Cuba and scoring the lone marker in Tuesday’s 1-1 draw against New Zealand.
Despite showing well in his recent international outings, having to compete with the likes of Franck Ribery and Arjen Robben every day in training continued to make it difficult for Green to gain minutes for Bayern Munich. With the Bundesliga hitting its winter break, on Dec. 21 the MNT attacker signed with VfB Stuttgart.

New challenge! After great years at @FCBayern, I'm really looking forward to the new club, the teammates and the city 👌🏾 @VfB #jg37 pic.twitter.com/64FjgB53CU

Longtime Bundesliga participants, Die Roten (the Reds), were relegated from the German topflight last season, but are currently locked in a tight bid to gain promotion. As of his signing, Stuttgart sat third in the league, just two points back of first-place Eintracht Braunschweig.

A fresh start in Stuttgart should provide Green ample playing time as he works to get the club back to the Bundesliga and with eight caps and three goals to his name, the 21-year-old will hope regular minutes will make him a part of new MNT head coach Bruce Arena’s plans.