All the Things Christian Pulisic Did Faster Than Anyone

Ever since making his MNT debut in March 2016, a hallmark of Christian Pulisic's success has been setting multiple records as the youngest or first player to achieve different milestones for both the U.S. MNT and with Borussia Dortmund in the German Bundesliga.

Check out the milestones the now 18-year-old attacker has set since the beginning of 2016:

Having made his Bundesliga debut in a 2-0 win against Ingolstadt (Jan. 30) and his first start in a 1-0 victory at Bayer Leverkusen (Feb. 21), Pulisic earned his first senior team call-up ahead of the MNT’s all-important World Cup Qualifying clash against Guatemala on March 29 in Columbus.

With the U.S. holding a comfortable 3-0 lead, Pulisic entered the match in replacement of Graham Zusi in the 81st minute, making him the youngest U.S. player to appear in a World Cup Qualifier at 17 years, 193 days in the eventual 4-0 win.

Can’t have all the records, right?

Fresh off his MNT debut, Pulisic returned to Dortmund in April full of momentum. The attacker appeared in three of the team’s next four matches, including a 1-1 draw with Liverpool in the UEFA Europa League on April 7. Ten days later, he opened his Dortmund account, scoring what would stand as the game-winning goal in the 38th minute of a 3-0 victory at Hamburg.

With the goal, the young U.S. international became the youngest non-German player to score in the Bundesliga at 17 years, 211 days.

One week after opening his Bundesliga account, Pulisic was on target again, scoring the second goal in Dortmund’s 3-0 rout of Stuttgart. With the strike Pulisic also became the youngest player regardless of nationality to scored two goals in the Bundesliga at 17 years, 218 days. 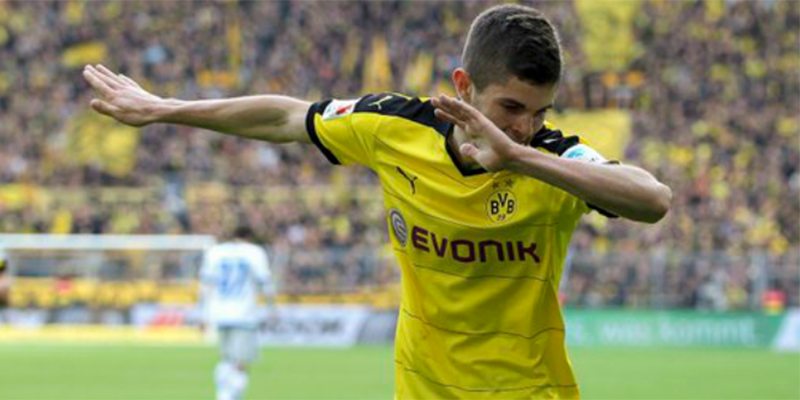 Youngest Player to Score for the U.S. MNT

Pulisic’s strong showings with Dortmund earned him a place on the USA’s Copa America Centenario roster. As the team built up to the tournament with three warm-up matches, the winger’s 69th minute goal in the MNT’s final friendly against Bolivia made him the youngest player to score for the USA at the senior level at 17 years, 253 days, beating Juan Agudelo’s previous mark of 17 years, 359 days. The goal came in just his third cap with the MNT.

Youngest U.S. Player to Score & Record a Brace in WCQ

The MNT traveled to St. Vincent and the Grenadines at the beginning of September, knowing that a win in Kingstown would all but book the team’s advancement to the Final Round of CONCACAF qualifying for the 2018 FIFA World Cup.

Up 3-0 at halftime, the U.S. was in cruise control during the second half until Pulisic and returning MNT midfielder Sacha Kljestan entered in the 66th minute. It took just five minutes for the pair to link up, as Kljestan swung the ball to Pulisic in stride who buried inside the left post in the 71st minute, making him the youngest U.S. player to score in World Cup Qualifying at 17 years, 349 days.

After assisting on Kljestan’s strike seven minutes later, Pulisic would go on to set a second MNT record, with his well-placed stoppage time strike making him the youngest U.S. player to score two goals in a match.

Pulisic put in a strong performance in the 4-0 win, assisting on Jozy Altidore’s 62nd minute strike.His most memorable play of the day came 31 minutes earlier when his first-time shot ricocheted of both posts before being turned away.

With all feats accomplished before his 18th birthday, Pulisic will have plenty more records to pursue now in adulthood.

Early in the midst of his first full season with the Borussia Dortmund first team, at 17 years, 361 days Pulisic became the youngest U.S. player to appear in the UEFA Champions League when he was thrust into the starting lineup for the club’s opening match away to Legia Warsaw.

Pulisic also became the youngest U.S. player to record an assist in the prestigious European competition, providing the helper on Gonzalo Castro’s 76th minute goal as BVB ran to a 6-0 win in Poland.

A consistent performer for Thomas Tuchel’s side throughout the season, Pulisic was called upon in the second leg of Dortmund’s UEFA Champions League Round of 16 tie against Benfica. Having fallen 1-0 to the Portuguese side weeks earlier, Pulisic led the charge at Signal Iduna Park when he headed on a corner kick for Pierre Aubameyang to open the scoring in the fourth minute.

On the other side of halftime, Pulisic became the youngest U.S. player to score in the UEFA Champions League (18 years, 171 days) sending home a deft chip that would stand up as the series-winner as Dortmund dispatched Benfica 4-1 on aggregate.

Pulisic’s Champions League strike came on the heels of his third league goal of the season in Dortmund’s 6-2 win vs. Bayer Leverkusen on March 4. Ten days later, he also tallied in BVB’s 3-0 DFB Pokal Quarterfinal victory vs. Sportfreude Lotte, making him the first German-based U.S. player to score in the Bundesliga, DFB Pokal and UEFA Champions League in the same season.

Have a look at his cup goal:

Youngest MNT Player to Score in Final Round WCQ

Just 10 days after achieving the scoring trifecta at Dortmund, Pulisic also became the youngest player in U.S. history to score in the Final Round of FIFA World Cup Qualifying, tallying just 12 seconds into the second half of the MNT’s 6-0 win against Honduras.

We can’t be positive, but we’re pretty sure that’s also the quickest goal scored by the MNT to begin the second half of any match. Have another look:

After coming on at halftime of the 2016-17 DFB-Pokal Final, Pulisic earned what would stand as the game-winning penalty kick in Borussia Dortmund's 2-1 victory against Eintracht Frankfurt on May 27, 2017.  With the win, Pulisic became the youngest U.S. MNT player to win a major European club trophy and just the second to win the DFB-Pokal after Thomas Dooley helped Kaiserslautern to the 1989-90 title. 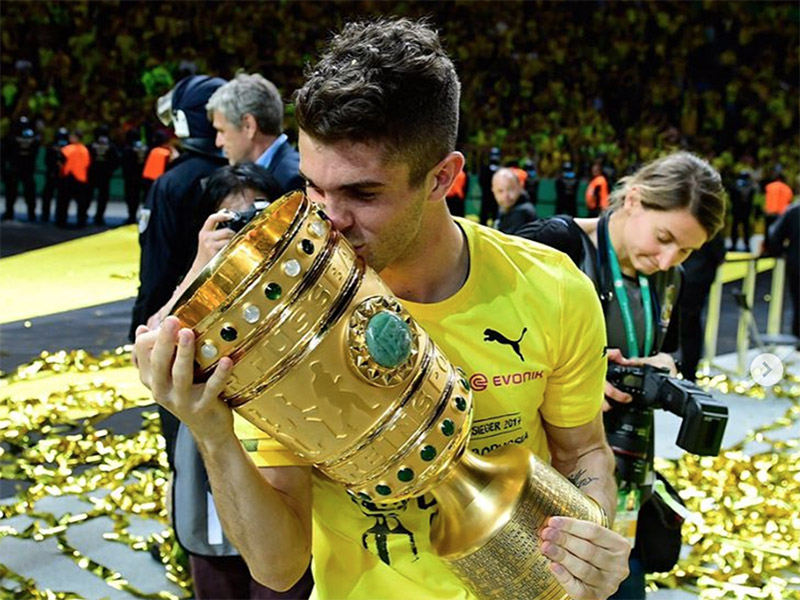