The 2017 CONCACAF Gold Cup is a moment of opportunity. For some, it’s their first with the MNT. Others are looking at a second chance to make a first impression at the international level with U.S. Men’s National Team head coach Bruce Arena back at the helm.

Part of the USA’s last Gold Cup championship side in 2013, Club Tijuana midfielder Joe Corona is making his first camp appearance since September 2015.

“It’s been two years since I’ve been here and I’m very happy,” Corona told ussoccer.com on Tuesday. “First of all, I’m very thankful that Bruce gave me the opportunity to be here and give me a chance to show myself and a lot of my teammates to play a great tournament.”

The international absence somewhat coincided with loan moves to Veracruz and Liga MX Acenso side Dorados Sinaloa, but Corona returned to Estado Caliente at the beginning of 2017 and proved vital in helping Xolos to the Clausura regular season championship, tallying two goals and three assists while appearing in all 19 matches during the campaign. 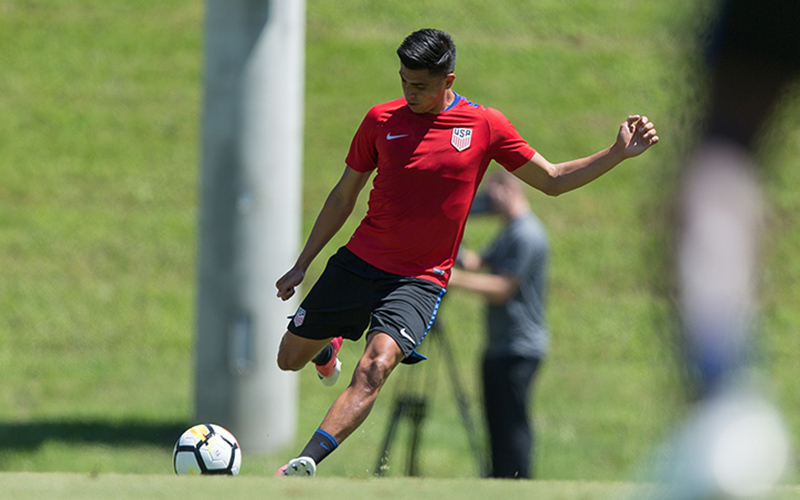 “We had a great run last season. I got a lot of playing time, and I think it helped me a lot to get my confidence back and get some goals. I think that’s the reason why I got the call-up.”

Corona is joined in camp by veteran forward Juan Agudelo, who memorably burst onto the U.S. MNT scene as the first Development Academy player to play for the National Team when he scored the late game-winner in a 1-0 friendly victory against South Africa back in 2010. He made his biggest mark the following year, appearing in 14 matches, including five of six during the USA’s run to the 2011 CONCACAF Gold Cup Final.

Making at least one senior team appearance every year since, Agudelo has remained on the periphery of the National Team but hasn’t found the consistency he’s hoped for on the international level. He puts the lack of regular appearances on himself.

“I believe I belong among the call ups, but sometimes I don’t show myself well at the club level,” he said. “That’s been the only thing I’ve been disappointed in: myself.” 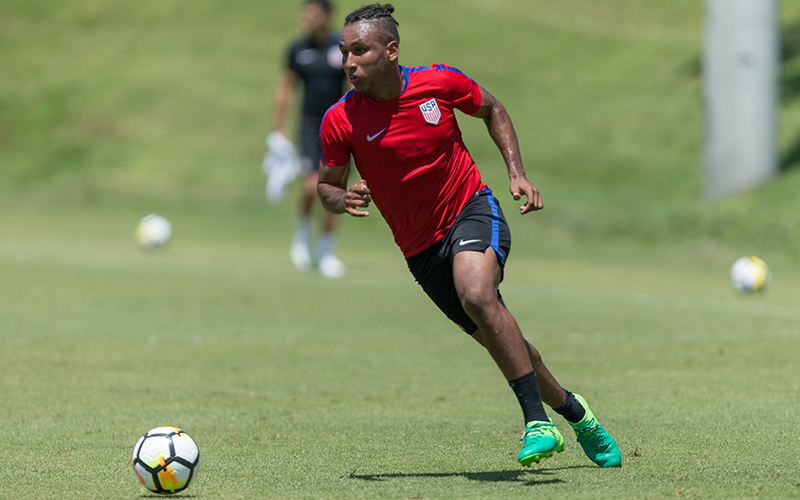 With 23 caps, Agudelo ranks high among the most senior players on the current Gold Cup roster and has hopes the extended look the confederation championship provides will help make a better case for further inclusion in World Cup Qualifying and a potential U.S. roster at next summer’s FIFA World Cup.

“It’s definitely a great opportunity for all of us,” he said. “With a couple new guys coming in, it’s strange to think that I’ve been here a couple times and it’s an opportunity you have to take. You don’t know when you’ll have another chance like this in a major tournament before a World Cup. As a kid I’ve always wanted to play in a World Cup.”

With both Agudelo and Corona having experienced the rigors of a Gold Cup before – and both playing in a final – the pair knows what it will take for the current group to help the USA lift its sixth regional trophy at the end of July.

“I think it takes a full lineup,” Agudelo said. “There’s got to be 23 players ready to play. There’s a lot of games, a short period of time to recover and I feel like the deepest squad wins the tournament. Back in 2011, luckily I was able to be a part of final, but just unlucky to lose a game like that [4-2 to Mexico].”

“I think it takes a lot of humbleness,” said Corona, who started the USA’s 2013 Gold Cup Final win against Panama. “We have to stay together as a group inside and outside of the field. I remember that 2013 team. We were very close on and off the field, and I think we have a lot of great human beings and great soccer players with a lot of talent that want to show themselves and earn the spot not only here in the Gold Cup, but also in World Cup Qualifying. I think it’s a great opportunity for us to put our hands out there and try to be a part of everything.”