The U.S. Men's National Team will head to Red Bull Arena for its all-important World Cup Qualifying clash against Costa Rica on Friday, Sept. 1. Here are five memorable matches the MNT has played against Los Ticos.

Having begun the Final Round of qualifying for the 2002 FIFA World Cup with consecutive wins at home against Mexico and away to Honduras, the U.S. turned its sights on exacting some revenge against Costa Rica following the Semifinal Round meeting in San Jose the previous year. Tied 1-1 late with Los Ticos on July 23, 2000, center back Gregg Berhalter headed a cross from the right out for a corner kick, only to be whistled for a handball in the box that resulted in Costa Rica’s game-winning penalty kick.

Nine months later, the U.S. attack hammered Costa Rica and nearly pulled ahead when Josh Wolff’s chip over Erick Lonnis was cleared off the line by Reynaldo Parks. The handball pendulum would then swing in the USA’s favor, first in the 24th minute when a ball over the top for Paulo Wanchope was only partially cleared by center back Carlos Llamosa before hitting the arm of Jeff Agoos. With Wanchope ready to run onto the ball, Agoos’ arm infraction was deemed unintentional by referee Jorge Luis Larrionda, who allowed play to continue. Had it been whistled, the U.S. would have been reduced to 10 men for the rest of the match.

Continuing to look for the game’s lone goal, the home side gained another advantage when Agoos’ cross following a cleared corner kick found Clint Mathis, who handled the ball into the path of Josh Wolff before the then-Chicago Fire striker swept home the game-winner in the 70th minute.

As they say, in soccer sometimes things even out.

Less than a year after that game in Kansas City, two of the players that benefited from the two no-calls scored to give the USA a 2-0 win against Costa Rica in the 2002 CONCACAF Gold Cup Final.

In the first half, Wolff broke through Los Ticos back line to poke past Erick Lonnis in the 37th minute. Just after the hour mark, Jeff Agoos scored the best goal of his international career, curling a beautiful free kick from 25 yards out into the top right corner to ice the win, giving the USA its second Gold Cup title and first since 1991.

The U.S. MNT chose new territory for its Final Round home qualifier against Costa Rica for the 2006 FIFA World Cup. Building off the great support Real Salt Lake received in its inaugural season, the MNT enjoyed an amazing atmosphere at Rice Eccles Stadium and used goals from Landon Donovan on both sides of halftime to run out to a 2-0 lead. Brian McBride followed it up with an 87th minute goal to ice the match, while Kasey Keller made two spectacular saves to hold on to the clean sheet. 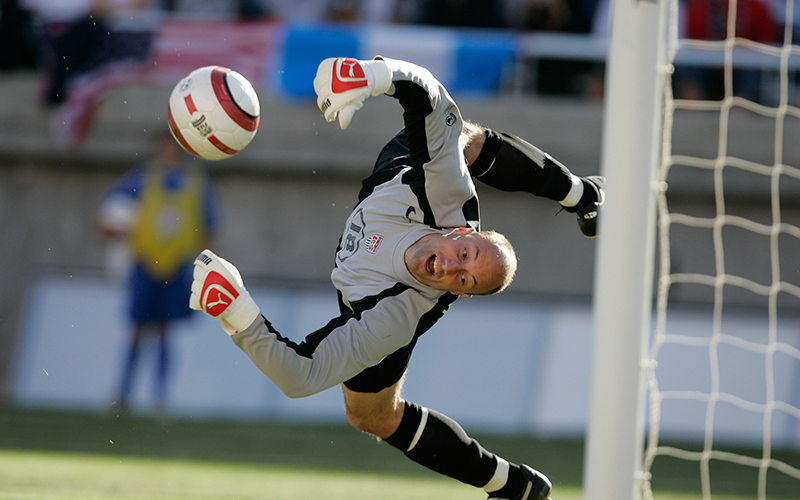 U.S. MNT goalkeeper Kasey Keller makes an acrobatic save against Costa Rica to help the USA to a 3-0 World Cup Qualifying win vs. Los Ticos in 2005.

The one that U.S. fans love to remember most and Costa Rica supporters would rather forget. Blizzard conditions smothered the greater Denver area just in time for kickoff of the pivotal World Cup Qualifier, not allowing for much in the way of soccer to be played.

Still, the U.S. jumped ahead in the 16th minute when Jozy Altidore’s shot from the top of the area deflected off a Costa Rican defender and straight into the path of Clint Dempsey where he poked up home the game’s only goal. As the snow piled up, the stadium grounds crew took advantage of stoppages to ensure that the lines on the field remained visible to keep the game going, with U.S. defender Geoff Cameron famously coming to the aid of one staffer who needed help getting his shovel across the field.

The game was halted momentarily in the 54th minute when the referee crew discussed whether to continue, but ultimately the decision was taken to finish the match. Costa Rica had no answer and the U.S. MNT gained an instant classic of a match, dubbed “Snowclasico” in the process.

Coming off a disappointing 2-0 defeat to third-ranked Colombia in the opening match of the 2016 Copa America Centenario, the U.S. stared elimination in the face in their second group game. Playing just steps away from U.S. Soccer headquarters at Chicago’s Soldier Field, the MNT took an early lead through Clint Dempsey’s eighth-minute penalty kick which also marked the veteran forward’s 50th international goal.

From there, Jermaine Jones and Bobby Wood added highlight reel strikes from outside the box to take the USA into halftime up 3-0, before Graham Zusi’s strong individual effort capped the scoring in the 87th minute. The 4-0 result was the USA’s highest margin of victory against Costa Rica and pushed the team on to a fourth-place finish in the tournament.