As veteran forward Clint Dempsey prepares to move into the U.S. MNT’s all-time scoring lead, here are five things you should know about Deuce: 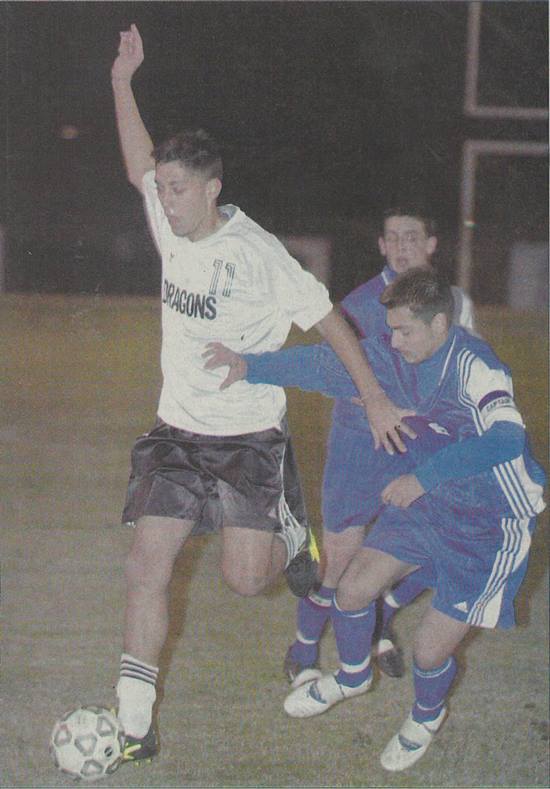 Hailing from Nacogdoches, Texas, Dempsey grew up in a trailer, playing soccer with bare feet on dirt fields where neighborhood kids would mark the goals with t-shirts and rolled-up socks. Once Dempsey’s talent was recognized, his parents would make the six-hour round trip drive to Dallas to practice with Dallas Texans, an elite youth club. The family sacrificed to help Clint’s dreams come true – the five kids would share one meal eating out and the only family vacations were trips to soccer tournaments.

Dempsey’s older sister Jennifer, a promising tennis player, passed away when he was twelve years old. The loss pushed him to work harder than ever on the pitch and when Dempsey points up after scoring, it’s a tribute to her memory.

After an illustrious high school career, Dempsey led Furman University, a small South Carolina school of less than 3,000 students to a pair of NCAA Championship appearances. Dempsey's first national team experience came with the U-20 team, where he was part of the side that made the Quarterfinals of the 2003 FIFA Youth World Championships in the United Arab Emirates.

Starring for the Stars and Stripes 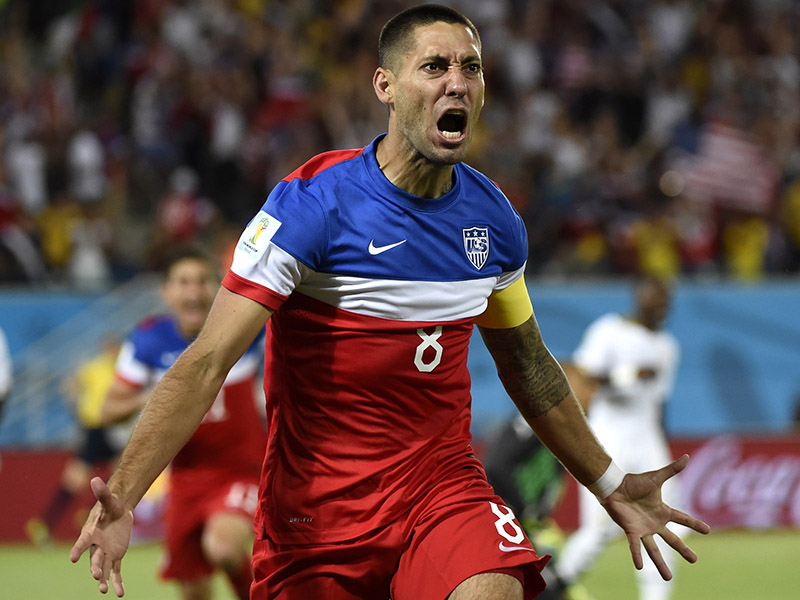 Dempsey celebrates his goal against Ghana in the 2014 World Cup

From childhood, Dempsey dreamed of playing in the World Cup. Those dreams came true in 2006, when he was selected by Bruce Arena for the roster headed to that year’s World Cup in Germany. He made his presence known, scoring in the USA’s final group stage match vs. Ghana.

Deuce has starred in three World Cups (2006, 2010 and 2014), scoring a combined four goals. A marker 30 seconds into the MNT’s 2014 World Cup opener against Ghana made No. 8 the only player in MNT history to score in three World Cups. He also tallied in the American’s 1-1 draw vs. England to open the 2010 World Cup in South Africa. 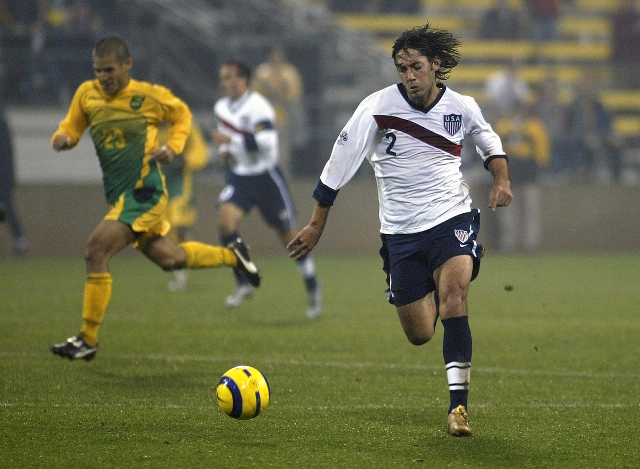 Since his first appearance with the MNT, a World Cup Qualifying match against Jamaica in 2004, Dempsey has become the sixth-most capped player in team history. He is the all-time leading scorer for the U.S. in World Cup Qualifying (18 goals) and has scored in some of the team’s most important matches in the modern era. He found the net against Egypt, then-world No. 1 Spain and Brazil in consecutive matches during the USA’s historic run to the 2009 FIFA Confederations Cup Final. Last summer, he paced the MNT with three goals and three assists en route to a Third Place finish at Copa America Centenario.

Dempsey has also been a crucial part of two Gold Cup winning rosters for the USA, helping win the competition in 2005 and 2007. He will look to add a third title on Wednesday night.

An American Striker in London 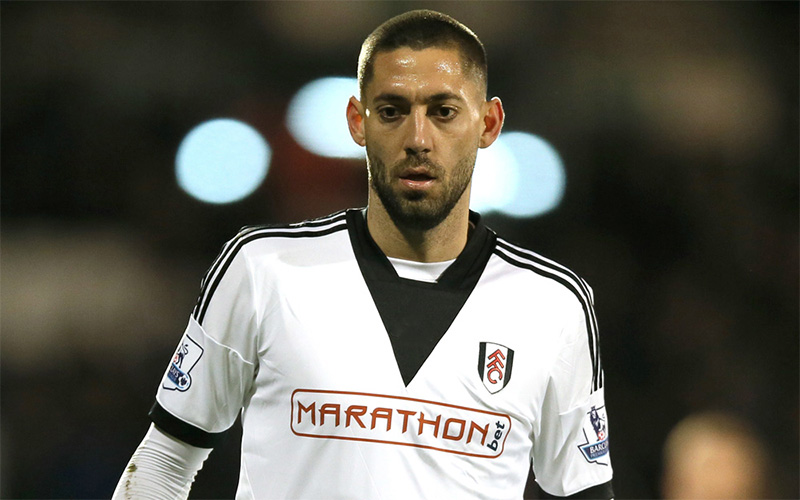 In 2004, Dempsey was drafted eighth overall by the New England Revolution in the Major League Soccer SuperDraft. A stellar freshman campaign earned him Rookie of the Year honors, but after three seasons in New England, Dempsey headed across the pond to England on the then-richest Premier League contract ever for an American at Fulham in southwest London.

There, Dempsey established himself as one of the greatest Americans to ever play in the Premiership. In a six-season run, he became the Cottagers’ all-time leading goalscorer with 50 league goals and led the team to its highest-ever English Premier League finish of 7th in 2009. The next season, Dempsey became the first American to play in a major European club final when Fulham reached the Europa League Final.

Dempsey also grabbed the EPL goal-scoring record for an American when he notched his 37th strike, surpassing former Fulham teammate Brian McBride’s previous mark. After six seasons with Fulham, Dempsey transferred to Tottenham Hotspur, where he played one season before returning stateside.

Don’t Call It a Comeback 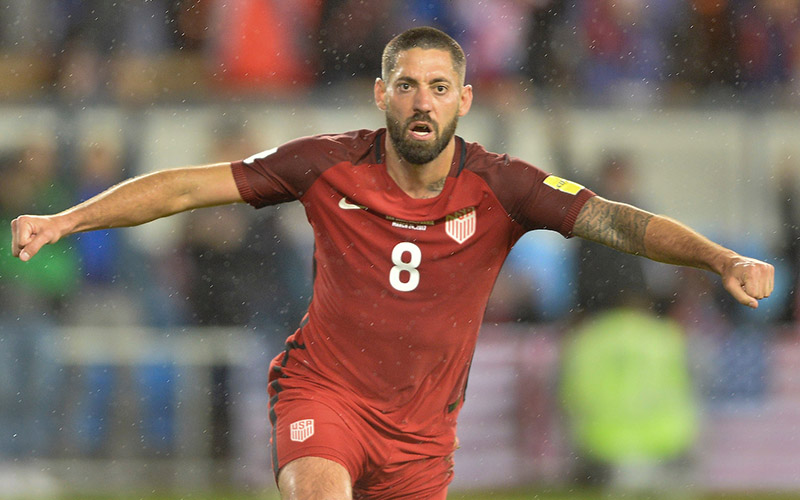 In 2013, Seattle Sounders FC executed the then-largest transfer deal in MLS history to bring Clint Dempsey back to the USA. He’s been a star for the Emerald City side, scoring 39 goals since returning to the league.

Starting last fall, Dempsey missed several months with the Sounders and MNT after he was diagnosed with an irregular heartbeat. He feared that the condition could spell retirement, but has come back strong this year for both club and country. Dempsey notched his second career hat trick in his return to the U.S. side in a 6-0 World Cup Qualifying win against Honduras in March.

Thanks to a unique Gold Cup rule, Bruce Arena made six changes to the roster following the Group Stage, including the addition of Deuce. Dempsey joined the MNT ahead of its first Knockout Round match against El Salvador, and he’s made quite an impact – assisting on Eric Lichaj’s first international goal in the Quarterfinal and on Jozy Altidore’s game-winner in the Semifinal. Dempsey then iced the semifinal with a goal of his own. Should he score in the Gold Cup final against Jamaica, it would be a goal with numerous storylines attached as it would not only come against the team he made his international debut against but also earn him the distinction of being…

At last weekend’s semifinal in his home state of Texas, three hours northwest from Nacogdoches, Dempsey lined up for a free kick in the 88th minute. A curling shot to the lower, right corner gave Dempsey his 57th international score and a share of the U.S.’s all-time goal-scoring record alongside 2006 and 2010 World Cup teammate Landon Donovan. Dempsey notably assisted perhaps the most famous of Donovan’s 57 international scores, the dramatic, game-winning strike against Algeria in the 2010 World Cup that sent the USA to the knockout rounds.

Now, Dempsey has the chance to become the sole leading scorer in U.S. MNT history and help hand the U.S. its sixth Gold Cup title. Tune in at 9:30 PM ET on Wednesday, July 26 on FS1, Univision and Univision Deportes Network to see Deuce take another crack at American soccer history.