Back in March, U.S. MNT head coach Bruce Arena said that a perfect year would be to win the CONCACAF Gold Cup and qualify for the 2018 FIFA World Cup.

Those comments were made at a time when the returning U.S. manager had led the team in just two friendlies and prior to coaching his first games in Final Round of 2018 FIFA World Cup Qualifying, in which the United States held zero points. A little more than four months later, Arena has guided the U.S. MNT on the path to a 14-match unbeaten streak, culminating with Wednesday’s 2-1 win vs. Jamaica and the 2017 CONCACAF Gold Cup championship.

“If you asked me in November this is where we’d be with the program, I’d probably say, ‘I don’t think so,’” Arena said about guiding the team to its sixth confederation championship. “For me personally, it’s certainly feels good, but I think for the players that are working real hard to represent the United States and get our National Team program better, it’s a lot of credit to them.”

While hailing the effort of the entire group during the three-week tournament, Arena was pointed in his praise for the team’s veteran players in both winning the competition and extending the team’s unbeaten streak.

“Our players have done simply an outstanding job from the first day I’ve taken this position. Our older players are unbelievable. The passion they have for this program, from our oldest player Tim Howard, to our captain Michael Bradley and Clint Dempsey, who is going to do whatever necessary for this team to be successful.” 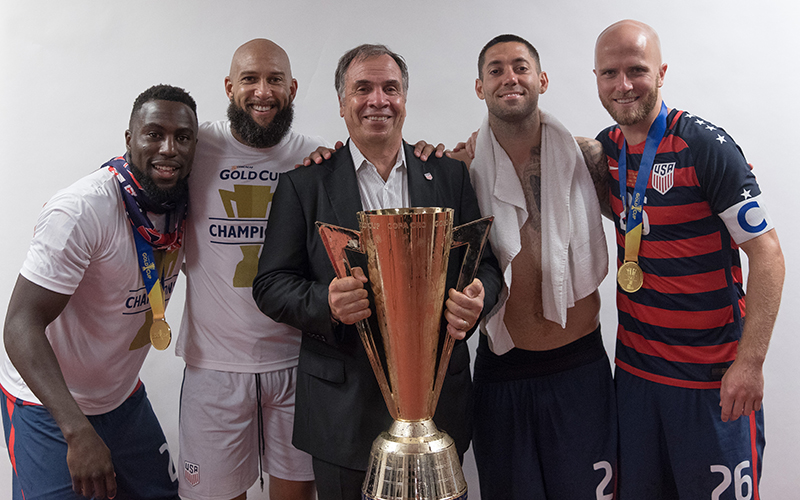 Bradley had similar praise for the way the U.S. boss has managed things since taking over in November.

“It’s been a good stretch for us, there’s no two ways about it,” said the tournament's Golden Ball winner. “A lot of credit has to go to Bruce and his staff for all the work they’ve done since they’ve come in. I think he’s found a group of players that are extremely willing and committed to do anything that he asks. I think it’s coming together in a good way.”

And while Wednesday night was about enjoying the moment, Bradley was adamant that the job isn’t yet finished.

“We’ve got to keep going,” Bradley continued. “We’re going to enjoy this tonight, but then we have to shift focus in a few weeks when we come back together for two qualifiers, because we have to take care of business and make sure that we’re on a plane to Russia next summer, ready to do something real there.”

And while the September World Cup Qualifiers against Costa Rica and away to Honduras will be challenging, should the U.S. win both, not only will the team tie its record 16-match unbeaten streak achieved under Arena in 2004 and 2005, it will also put itself on the doorstep of an eighth-straight FIFA World Cup appearance.

“We’ve made progress, but we have a long way to go,” Arena said. “We have to have the tone set the right way if we’re going to get through these next four World Cup Qualifying games. We’re making progress, we have to, but I still think we’re behind the eight ball so we have to be successful in September and October and we have a group of guys that are motivated to do that.”