“I’m just trying to be consistent and comfortable in my spot. The more games I play, the more comfortable I’ll feel."
July 11 2017

Though still just 21 years old, U.S. Men’s National Team midfielder Kellyn Acosta has been handed a more responsibility in this group during the 2017 CONCACAF Gold Cup.

And in taking on additional duties, Acosta has learned that sometimes the good comes with a side of bad.

In the team’s warmup match against Ghana, free kick responsibilities fell to the FC Dallas Homegrown player, resulting in his second-half game-winner that day against the Black Stars. In Saturday’s tournament opener against Panama, Acosta and partner Dax McCarty had trouble at times dealing with the midfield tandem of Anibal Godoy and Gabriel Gomez, forcing the U.S. to settle for a 1-1 draw with Los Canaleros.

While the result didn’t rest solely on the shoulders of the midfield duo, Acosta admitted disappointment in his own performance as well as the team’s overall display on the day.

“I gathered some thoughts after the game,” he told reporters on Tuesday. “I was a little upset about how I played individually and obviously collectively as a team. We expected more out of ourselves. It wasn’t our best performance, but sometimes that’s how the game goes.”

Having had time to go over the game film, Acosta felt it was clear what went wrong for the U.S. midfield in the match and what needs to improve for Wednesday’s clash against Martinique.

“Godoy and Gomez were having a field day, so I think Bruce really stressed for me to get closer to the midfield line and make it a little bit more challenging,” he continued. “I thought it was too easy for them, and defensively we just were almost too soft. They were really physical with us, really aggressive and actually we didn’t really adjust to it at all. It really gave us some trouble.” 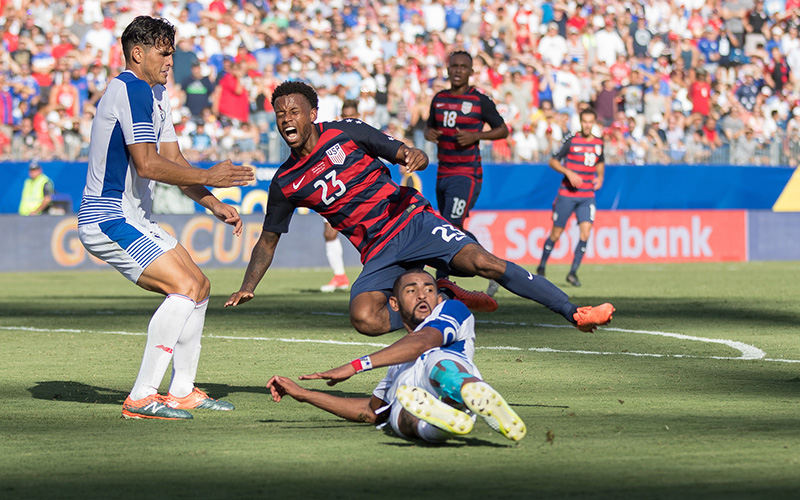 The draw against what is arguably the USA’s most difficult group opponent isn’t the end of the world, but it does place greater emphasis on Wednesday’s match in Tampa where the U.S. finds itself taking on a Les Matinino side that leads Group B following their 2-0 win against Nicaragua in Saturday’s nightcap.

“We watched a little bit of film and they have some special players,” Acosta said. “If you give them time and space, any team will hurt you. We need to be mindful of that and we really need to take the game to them. It’s really imperative that we get the three points, and we can’t settle for anything less. We’re going to go out there, battle, contend and get the results.”

With the year Acosta has had for both FC Dallas and his growing role in the U.S. Men’s National Team, it’s easy to forget that he’ll only turn 22 on July 24. The appearance against Panama was his 10th since debuting for the MNT in January 2016, and he knows his progress will continue with more international seasoning.

“I’m just trying to be consistent and comfortable in my spot. The more games I play, the more comfortable I’ll feel. Obviously Bruce has given me some extra responsibilities with the team and I’m excited to do so. I take set pieces and stuff like that with my club team, and I’m glad that’s translating with the National Team. Obviously a lot of work needs to be done. I need to touch up on some things, but I’m growing and still learning each and every day and hopefully I can continue just doing well and be more helpful for my teammates.”