CHICAGO (Jan. 17, 2018) – Beginning today, U.S. Soccer will roll out its recently announced Grassroots Coaching pathway initiative with an introductory online coaching education module that any person interested in becoming a soccer coach can take at no cost.

The Introduction to Grassroots Coaching Module is now the first step for coaches to progress within the coaching pathway and learn about U.S. Soccer's coaching education philosophy. The new introductory module, which will take approximately 20 minutes to complete, can be accessed on the U.S. Soccer Digital Coaching Center (DCC) and aligns with the Federation’s ongoing effort to improve the quality of coaches at all levels.

“Together, with our members, U.S. Soccer is concentrated on growing the game through grassroots education,” said Director of Coaching Administration Frank Tschan. “This introductory module will provide coaches with a preview of how they can better themselves in order to improve the experience and environment of our grassroots players.”

How to access and take U.S. Soccer’s Introduction to Grassroots Coaching Module: 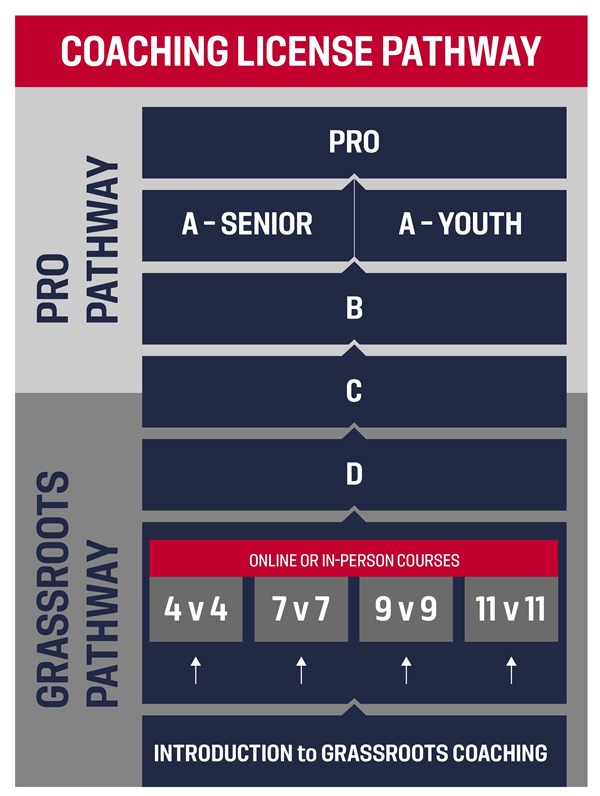 In order to progress to the U.S. Soccer D License course, coaching candidates must hold an E License (which has been replaced by the Grassroots courses), or they can proceed after completing a minimum of two in-person courses (one of which must be the 11v11) and one online course across any of the four levels (4v4, 7v7, 9v9, 11v11). Candidates who previously earned the F License may use that certification to meet their online course requirement for any of the four Grassroots courses. Once the Grassroots License is complete, there is no waiting period before coaches can continue onto the D License.

“Children learn through play,” said U.S. Soccer Director of Coaching, Nico Romeijn. “As coaches, we must allow our players to experience the game, and our role as coaches at the grassroots level is to facilitate that experience. Through the new courses organized by U.S. Soccer and its members, coaches will be empowered with knowledge and practices to create a positive, fun learning environment for their players.”

Registration for the in-person courses for each of the four grassroots levels will be available in early February. When signing up for an in-person course, DCC users will have the ability to select a nearby U.S. Soccer Member Association that will administer the course.

Open registration for online grassroots courses will be available later this spring on the DCC.

Concurrently with the roll out of the new Grassroots courses, the F and E courses will transition out of the U.S. Soccer Coaching Pathway. These licenses will still be recognized by U.S. Soccer and both certifications remain relevant as a means to advance within the pathway.