The most recognized player in American soccer, he has established himself as a star of both the MNT and Borussia Dortmund and is now looking to become a leader on the U.S. MNT and example for American players aspiring for more.
Kyle McCarthyJuly 16 2018
RISING

Christian Pulisic lives ahead of the curve. His entire life serves as a model for pushing forward and reaping the benefits at the earliest possible moment.

It is how the United States midfielder functions at the highest levels of European soccer and it is why – even at the age of 19 – he is the beacon for an ascendant, dynamic group of young Americans poised to make their mark in the years ahead.

“I like to think of myself as a leader,” Pulisic told ussoccer.com during a recent interview in Germany about the next generation of players. “I mean, I was kind of the first one to be here and break through. It’s been cool having other guys (do it), and seeing other guys doing what I was doing. It’s really exciting for me. Of course, seeing other Americans succeed is everything that I want.”

Pulisic navigated toward this accelerated path from the beginning. His formative years in Hershey, Pa. and suburban Detroit nurtured him within a support system – caring parents with a competitive streak forged in their own soccer careers at George Mason, siblings there to prod and urge him forward – ideal for the challenges ahead. 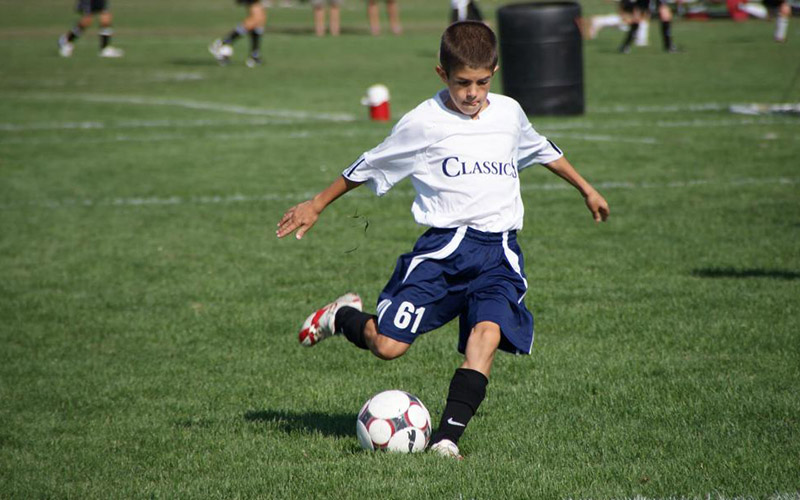 “My first memory was very young, pretty much as soon as he could walk, he was kicking a ball around,” Kelley Pulisic said about her youngest son. “My daughter was playing. My husband always was playing. Soccer was always in our life. Christian really learned to walk with a soccer ball at his foot.”

In that sort of household, Pulisic always set his sights on the next step, the next way to make his mark. The lofty aspirations started at an early age and stuck with Pulisic through a spell in England and his time in Michigan as his father, a former indoor star with the Harrisburg Heat, served as head coach of the Detroit Ignition. Those objectives prompted him to set his sights high and track the achievements of the players he wanted to model.

“Landon Donovan would be the biggest one. I mean, watching him score the goal against Algeria and moving us on in the 2010 World Cup is something that I'll never forget,” Pulisic said. “So I always wanted to be able to do something like that.”

“There were a lot of players who were just a few years older than me that I was watching. At the Nike Friendlies, I remember (Orlando City midfielder) Cam Lindley was there. He was a younger guy as well and I remember looking up to him. He was a good player and I wanted to be able to do that and play in a tournament like that.” 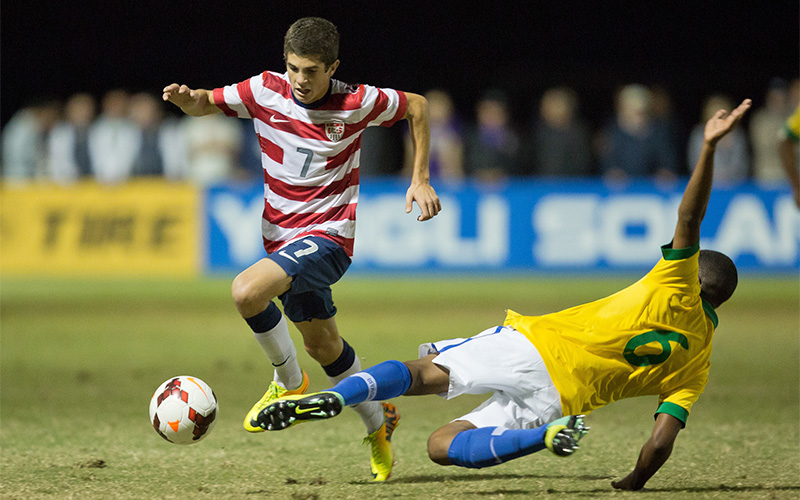 Pulisic grasped his own chance to shine at the 2013 Nike International Friendlies and used the platform to eventually earn himself a move to Germany after impressing during a tournament in Turkey shortly thereafter. He left for Borussia Dortmund with his father, Mark, and went with a place in the first team in his mind. The presence of a familiar face aided his adjustment, while his natural ability and his persistence every day carved out his place in the Academy and signaled his potential well ahead of schedule.

“I think it was very good for his development because he played in a very good team,” Borussia Dortmund youth coordinator Lars Ricken said. “That team won the German championship four times in a row. Because of this, in each training session and in each match he could race on to the next level. He was getting better and better with each training.”

By accelerating his adjustment period and standing out with the Academy side, Pulisic forced his way into the first team picture. It did not take long for then-Borussia Dortmund head coach Jürgen Klopp to integrate Pulisic into his plan.

“We said to him, we have a really great player, you have to see him and to let him train with you,” Ricken said. “I think after the third training session he said, ‘OK, now he's a member of our first team.’ … I think he would have had his first performance with the first team when he was 16, but he wasn't eligible to play yet. We saw his first performance from when he was 17. I think our coach was so impressed by his technical skills. He was very focused, very disciplined. His speed of action was marvelous.” 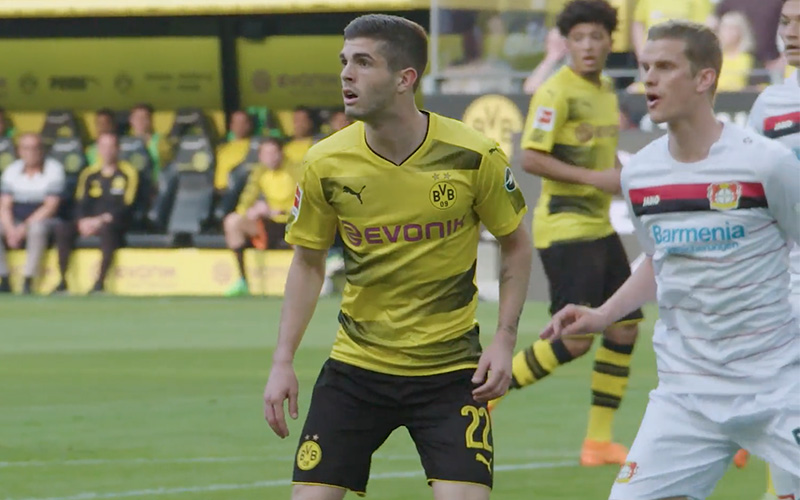 All of those abilities appear week after week in the Bundesliga now. Pulisic isn’t a prodigy or a phenom anymore, even though he is the youngest foreign player to score a goal in the Bundesliga. He is a tried and tested performer at the highest levels, an admittedly young player with Champions League and World Cup Qualifying experience. One that helped Borussia Dortmund win the 2017 German Cup, of which he proudly has a replica on display in his apartment.

He is a figure capable of changing a game – any game, not just the straightforward ones or the ones that might suit him best – and shouldering the increasing load heaped upon his shoulders.

“I think he's led the way,” Schalke U-19 midfielder Nick Taitague said. “I mean he's kind of paved the way in Europe for a lot of American players, but also we're trying to make a name for ourselves as well. I think he's shown that he could do that and he's inspired us all to go on our own journey and see what we can do.”

Part of the process now involves acting as a port of call for other American players working their way through the ranks. More and more outposts crop up with each passing day as clubs identify and land promising players from the States. Pulisic serves as a touchstone for those up and coming players, the ones who want to join him and Schalke midfielder Weston McKennie as frequent fixtures on Bundesliga team sheets.

“Yeah, I definitely have a good relationship with all the American players,” Pulisic said. “We’re pretty much talking every day. When we all have a free day or something, we all try to get together. I've had all the guys over here one time for a little party and you know, just to kind of get everyone together, talk about what's going on and have a good time.” 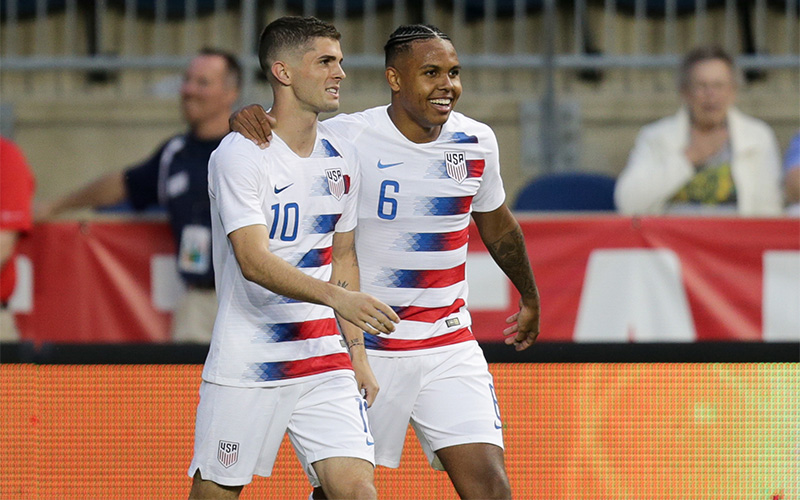 The process started with serving as a support system for former Youth National Team teammates Haji Wright and McKennie (pictured with Pulisic above) – who has since gone on to first-team football – when they arrived to Dortmund’s Ruhr Valley rival in 2016. The following year, another YNT alum, Taitague found his way to Veltins Arena, where midfielder Zyen Jones also joined the club’s development setup. The group’s support net has been cast wider to Belgium where Erik Palmer-Brown was on loan with Kortrijk and another YNT alum, Juan Pablo Torres, is earning his stripes with Lokeren about two hours away.

The close proximity allowed these Americans abroad to bond off the field and, in at least one case, soak up some of the guidance Pulisic provides through his experiences.

“There's a lot of things,” Taitague said. “I mean, his willingness to compete. He’s a competitor, whether it's on the field, whether he's playing, or whether he’s playing ping pong, he's not happy when he loses.” 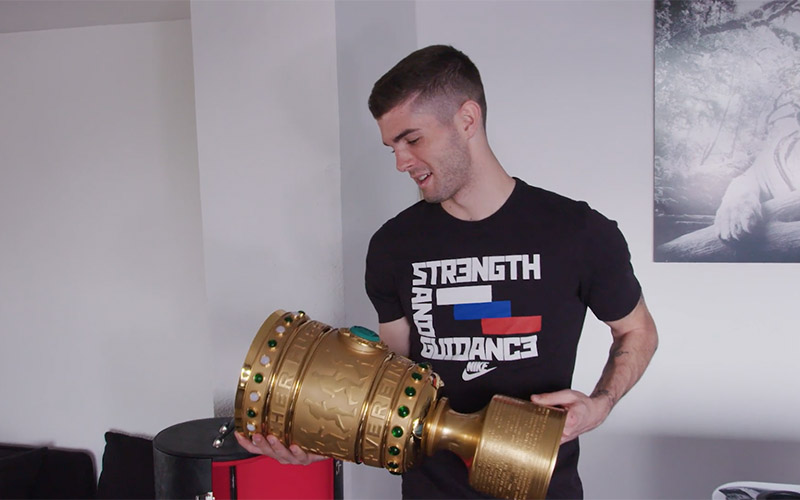 What they see in Pulisic – and what the people around him notice more and more – is a person increasingly comfortable with his responsibilities and his surroundings. It is a function of his two-and-a-half years in the Dortmund first team and the experience of adjusting and thriving in a new country.

“I think he's really growing up,” Kelley Pulisic said. “With him living in Dortmund now that my husband's not there, he's got to take care of himself and learn about a lot, not just the football. He's got to learn how to live and pay the bills and do the normal things that adults do. I think this last year, especially, he’s learned a lot and his growth has been important.”

Every step contributes to his loftier perch now. He is no longer steeped in expectation. He is here in every form, a critical component of the present for club and country. The future looms for a group already oriented toward a return to the FIFA World Cup in 2022, but Pulisic plans to grasp what is in front of him now with both hands. 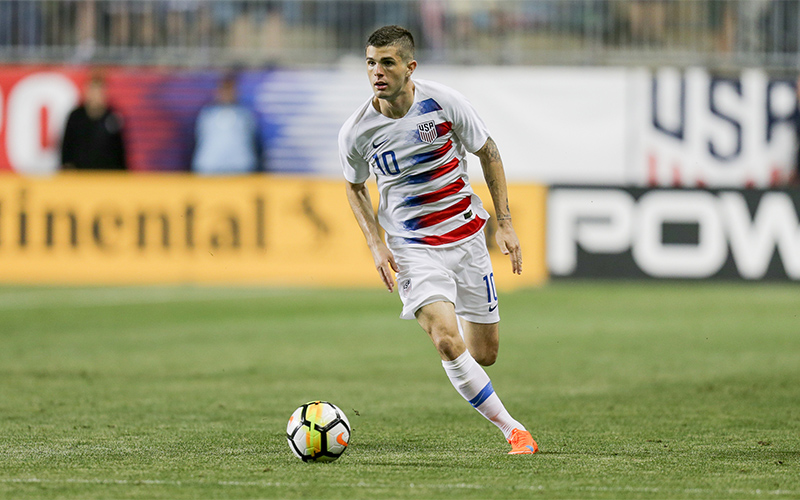 “I definitely feel like I can be a big part of that, turning things around for the National Team,” Pulisic said. “I'm going to give everything I can to put the team in the best shape possible. I definitely feel responsibility for helping to get us back to the World Cup. You know, I feel that I let some people down. I guess I just kind of want to make up for that and I'm going to continue giving everything for that reason.”

It is a mantra cultivated from his earliest days, back when he first found a ball at his foot and started him along this accelerated path. And it is what serves him now as he plans to assert himself more and more with each passing day and steer the National Team into this new era.