Neymar Headlines Roster for USA-Brazil on Sept. 7 in New Jersey

Set to jumpstart a new cycle, the next generation of the U.S. Men’s National Team will begin this fall’s Kickoff Series with a stern challenge as it faces Neymar and a star-studded Brazil side on Sept. 7 at MetLife Stadium in East Rutherford, N.J. (TICKETS).

Additionally, 11 players on the roster combined for a total of 21 trophies won across domestic and European club competitions this past season. Members of the squad lifted league and cup hardware in England, France, Italy, Portugal and Spain, while Casemiro helped Real Madrid to a third-straight UEFA Champions League title and Filipe Luís was part of Atlético Madrid’s UEFA Europa League-winning squad. 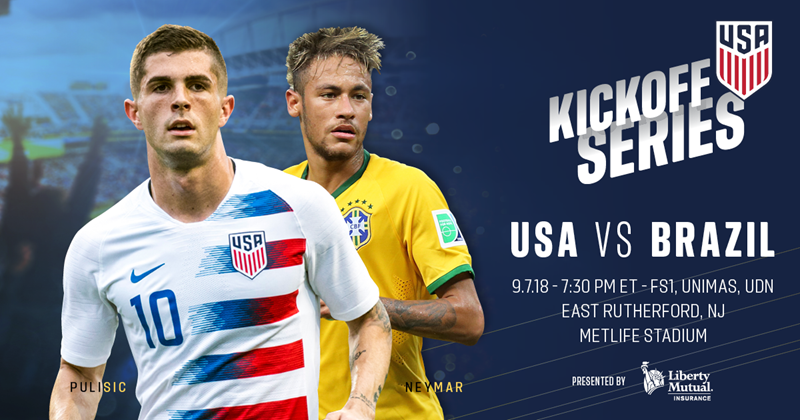 Coming in at No. 3 on August’s edition of the FIFA World Rankings, Brazil will arrive at MetLife Stadium as the MNT’s first of six opponents during the fall Kickoff Series, a slate of matches that will see the USA face one its strongest schedules in a calendar year.

Four days after the Brazil clash, the USA will renew a regional rivalry in USA-Mexico, presented by AT&T, on Tuesday, Sept. 11 at Nissan Stadium in Nashville. The next month, the MNT will take on another South American powerhouse, Colombia, on Thursday, Oct. 11 at Raymond James Stadium in Tampa, Fla., before facing a still-to-be announced opponents on Tuesday, Oct. 16 in the United States.

The MNT will then complete its 2018 schedule with a trip to Europe where it will face 2018 FIFA World Cup Semifinalists England on Nov. 15 at London’s famed Wembley Stadium before a clash with Italy on Nov. 20 at a site to be determined in Europe.