Cindy Parlow Cone: "Like a Kid in a Candy Store"

Cindy Parlow Cone’s path to the National Soccer Hall of Fame started with a decision she made as a 16-year-old – to leave Germantown High School in Memphis a year early and enroll at the University of North Carolina.

“The whole reason behind going to UNC early was to try to make the 1996 Olympic team,” Parlow Cone recalled on the eve of her induction as part of the 2018 National Soccer Hall of Fame Class. “The crazy thing to me now is why I even felt like I had a chance to make that team. I had never been a part of the National Team. In retrospect, it set my life on a whole new course.”

That course included three national championships at UNC, two national collegiate Player of the Year trophies, four All-American awards, two Olympic Gold medals, one bronze, a World Cup championship, and now a spot in the National Soccer Hall of Fame, which opens the doors to its newest permanent home in Frisco, Texas on the weekend of Oct. 20, 2018. “It’s really nice to be honored this far past your playing career,” she added. “Hopefully people have seen that I’ve tried to continue to have a positive impact on our game.”

Trying to Absorb the Moment
That decision to attend UNC 23 years ago began an 11-year National Team career starting with the 1996 Olympics, the first Games in history to include a Women’s Football Competition. “Just being a part of the Olympics was unbelievable,” said Parlow Cone, a rangy attacking midfielder throughout her more than decade-long career. “I was like a kid in a candy store. I took pictures of everything and just tried to absorb every moment. I didn’t know if it would be my last time.” 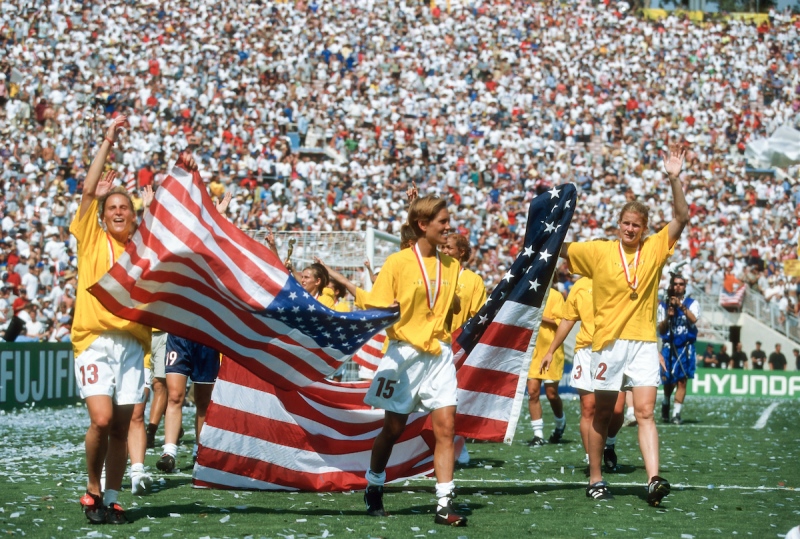 Her role with the National Team went from a seldom-used sub in ’96 to a prominent role in 1999. She started all six games of the 1999 World Cup and scored twice en route to a historic world title for the U.S. WNT. “In ’99, I remember feeling like our sport had finally arrived,” said Parlow Cone, who later went on to coach the NWSL’s Portland Thorns, first as an assistant and then as head coach. “It was just so cool to see our sport and our team having such an impact, and it was amazing to see that impact continue after the World Cup in the growth of our sport and girls sports.”

Being elected to the Hall of Fame has given her a chance to reflect. Parlow Cone’s National Team career spanned 158 games, and her 75 goals ranks fifth all-time for the U.S. But when she thinks back, it’s not the goals or victories that stand out. “It just keeps coming back to the people,” she said. “So many people have impacted my life in so many ways. I made the [U.S. National] Team when I was 17, so in those really formative years I was surrounded by some great people and great leaders, really intelligent and strong women. It shaped who I am.”

Captain for Life
She points to two people in particular. “I always try to learn something from everyone I meet, and I truly think I learned something from every teammate I had. But if I had to point to a couple I really learned a lot from, one would definitely be Carla Overbeck. I call Carla my Captain for Life. I learned how to treat people, how important it was to get to know everyone and how to motivate them.

“She [Overbeck] went out of her way to come to my room when I was injured in my first camp. She talked to me for like 30 minutes, which had to be painful because I probably said two words the entire time. For the captain of the National Team to do that for me was amazing.”

The other is the player she roomed with on her first international trip. “For the trip to Brazil in January of ‘96, they roomed me with Mia Hamm,” she said. “I was like ‘Oh my God.’ I had her poster in my room back home. I didn’t know what to do. She would get a phone call, and I would be like ‘Should I leave, should I stay, what do I do?’ But she was super nice.”

What really stayed with Cindy is how Hamm handled the withering public attention. “Mia was in the spotlight all the time,” she explained. “Everyone wanted a picture with her, wanted her autograph, wanted to talk to her. Just watching how she handled all that was incredible. She is a quiet, reserved, private person not seeking the limelight, but she knew how important her role was for our team and our game.”

Hamm Guides the Way
“[Hamm] always talked about her team and always deflected praise back to her teammates. It was just a really impressive thing to watch,” added Parlow Cone, full of praise for an understated legend of the game. It had to be challenging and exhausting for someone as introverted as her. But seeing her navigate all that and how selfless she was at every turn will always stay with me.” 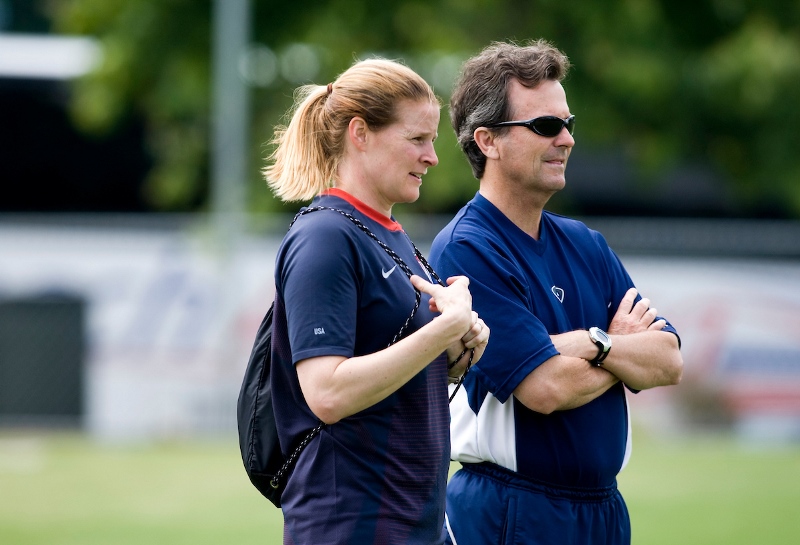 Parlow Cone at training with famed coach Anson Dorrance, who coached her at UNC and with the WNT.

Parlow Cone uses all she learned over her years as a youth soccer coach. She is a Director of Coaching for girls with the North Carolina Football Club, a 13,000-player club in the Triangle area of North Carolina, where she lives with her husband John and their son Steven, who turned a year old on Oct. 11 “The biggest adjustment in coaching was I had to set my competitiveness aside,” she says. “I had to meet players where they were and then help them get to where they want to be.”

And Cindy Parlow Cone, from her own journey from Germantown High to the National Team and now the Hall of Fame, knows how to get you where you want to be.