It’s easy to put things like soccer into perspective when you’ve dealt with life and death. “After being in critical care situations, you know to manage when the occasional crisis pops up and those around you are getting a little too excited,” said Doctor Bob Contiguglia – MD, U.S. Soccer President from 1998 to 2006 and one of the men responsible for helping the American game hit some of its highest notes. “I used to tell the staff at USSF when I was there and things got tough: ‘this isn’t life and death – I know life and death and this isn’t it,’ and that would always calm everyone down.”

Intelligent, ambitious and a leader from an early age, Contiguglia was drawn to the game of soccer on Long Island in his native New York. He grew up in the 1940s and 50s in Great Neck, just a stone’s throw from Lake Success where the United Nations was located before opening in its current home on Manhattan in 1952. “I was introduced to the game in grade school by a coach who was Israeli and also played in Israel and with the UN right down the road we had a lot of foreign kids in my school system. Because of that, there was lot of soccer played around me and I liked it right away.”

Contiguglia, now 77, recalls kicking a ball against a wall hundreds and hundreds of times each day, forcing himself to use both feet. There were trips to Randall’s Island with his high school teammates to see Pele play in the early days of the North American Soccer League (NASL) and watching the old PBS program Soccer Made in Germany to get a glimpse of the soccer world beyond. He took in all that was available to him before eventually lining up in the first varsity program at Colombia University since the end of World War II, between 1959 and 1963.

Medicine & Soccer
After that, soccer hit the back burner as Contiguglia pursued his medical degree. Medical School and training and residency doesn’t leave much free time and soccer fell by the wayside for a while. But it was there, during his training at King’s County Hospital in Brooklyn – one of the busiest city hospitals in the country at the time – that Contiguglia learned to deal with high stress, high pressure and high stakes. “It was a real gun-and-knife club back then and you had to manage emergency situations with no sleep and long hours. If you can manage those situations, other things suddenly become a lot easier.”

It was in the 1970s when soccer reemerged in Doctor Bob’s life. Having relocated to Denver, he picked up playing in the local men’s leagues – now as a left fullback instead of a speedy left winger. And when his son turned six, he was volunteered to coach. From there, his natural organizational instincts – honed as a student leader in both undergraduate and graduate school – took hold. “It started out locally and then I moved on to the Colorado State federation and you kind of develop and see what’s needed where you end up,” said Contiguglia, looking back on his first steps into soccer administration. “We united all the independent local organizations and we went from 300 registered players to 30,000 in six years.” 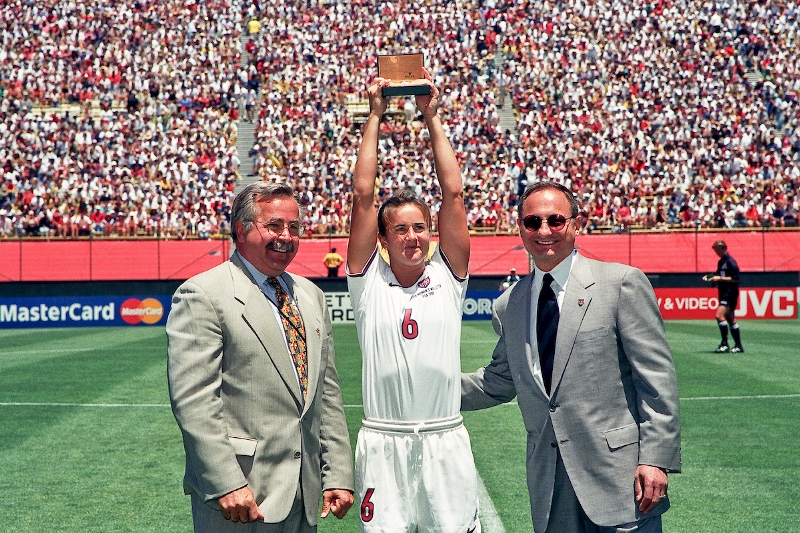 Contigulgia went on to become president of U.S. Youth Soccer and by 1990, he was on the USSF Board of Directors in charge of guiding the stars of tomorrow, while Alan Rothenberg focused on hosting the upcoming World Cup in 1994, and Hank Steinbrecher handled the professionalization of the game in the country, which eventually led to the establishment of Major League Soccer (MLS) in 1996. It was a crossroads for the game in America. Contiguglia was elected USSF President in 1998, one year after the failure of the U.S. Men in France, a year before the pivotal 1999 Women’s World Cup and four years out from the USA’s best performance in a men’s World Cup in the modern era.

U.S. Soccer Savior?
“I remember a story running in the newspaper after I was elected president and there was my picture and the headline read: ‘Can this man save the sport?’” remembered Contiguglia. “There was fragility around MLS, which had just started. The men had just come off the horrible performance in France at the 1998 World Cup and we were still a year before the great success of the Women’s World Cup in 1999. My response was this: “Just look at the players we’re bringing up and what we’re doing – we had guys like Tim Howard and DaMarcus Beasley and a kid named Landon Donovan in the pipeline.”

Four years after the doom and gloom of 1998, Contiguglia – ever eager to pass the credit off to all those volunteers and subordinates down the line – had presided over an astonishing turnaround. He calls the 1999 Women’s World Cup, “the most important women’s sporting event of the 20th century,” and the 2002 Men’s World Cup in Korea and Japan stands as a watershed moment and the best performance by an American Men’s team in its modern era (1990-present). Many of those youngsters he pointed to in his first year on the job had fully come of age; the likes of Landon Donovan and DaMarcus Beasley had become stars on the world stage in a run to the Quarterfinals, eliminating Mexico, stretching Germany, and unlucky not to reach the Semifinals. 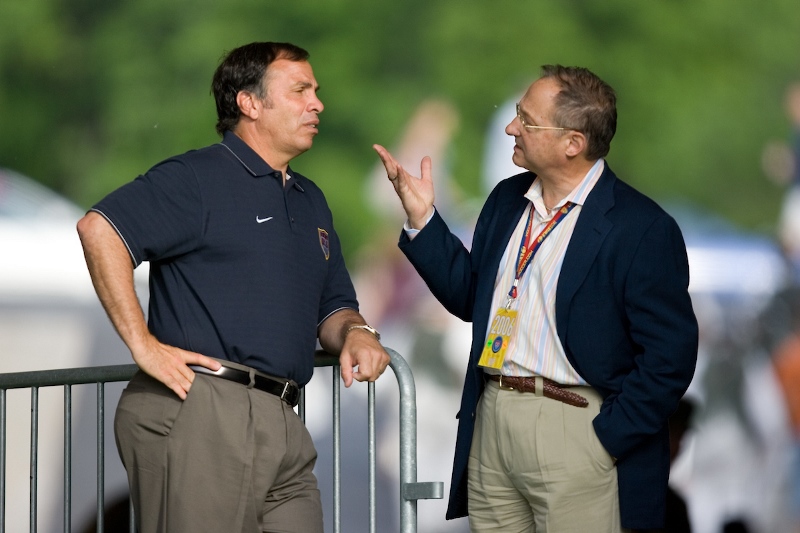 Dr. Bob Contiguglia (right) and Bruce Arena (left) helped guide the U.S. MNT to its best finish at a FIFA World Cup in the modern era of U.S. Soccer.

“The reality is that 2002 put us on the stage,” said Contiguglia from his home in Colorado, where he teaches, fittingly, a college course on Sport and Society. “That was really the event that gave us credibility. We went from a minnow to a real player on the world stage. I remember going to a FIFA meeting and having delegates come up to me and say ‘you played better than Germany [in the Quarterfinals], it was a handball and you should have won the game – that coming from serious soccer people in the international arena was something.”

2003 Women’s World Cup – Last-Minute Challenge
In 2003, Contiguglia oversaw the considerable organizational challenge of putting on a FIFA Women’s World Cup on U.S. soil with only four months notice. The tournament was moved from China PR at the eleventh hour over fears surrounding the outbreak of the SARS virus. The Final of that 2003 tournament, which went off without a hitch, was played in the Home Depot center – then the USA’s sparkling new National Team Training Center, a project Contiguglia himself oversaw from start to finish.”

His tenure at the top of the Federation came to an end in 2006. And now, still coaching youth soccer out west, he enjoys looking back on a lifetime spent in the game – from kicking the ball against a wall with both feet to presiding over massive growth at the highest levels of the American game. “You’re able to sit down and reflect on what you’ve done over the last 65 years from where I am now,” he said. “It’s an enjoyable thing and it’s humbling to be honored by your peers. But somehow it seems improper for me to be recognized while so many who put so much into the game during the years aren’t – and I’ll be sure to stress the importance of all of those people when the time comes.” 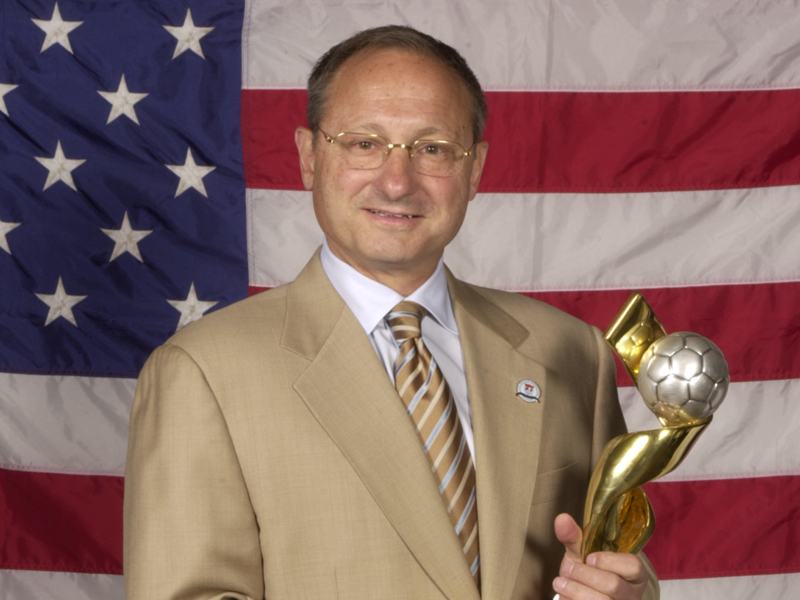 On 20 October, Dr. Bob will enter the National Soccer Hall of Fame as a member of the Class of 2018. What he’ll remember most, more than the wins or losses, were the connections made. “Relationships you made with your friends through soccer. I have those relationships through to this day,” said the former president, who still ranks among his best friends those teammates he lined up alongside at Colombia, organizing out West and raising the profile of game through the course of an impressive life in soccer. “These people, these connections – that’s what I remember most and what I value most.”