A big game to kick off a big year. Below is France’s roster for the match, and the Five Things to Know about the world’s third-ranked team.

HEAD COACH: Corinne Diacre, a former star player who debuted for France at the age of 18 and compiled 121 caps for Les Bleus. She played in the 2003 FIFA Women’s World Cup and the 1997, 2001 and 2005 European Championships, where she was the team captain.

USA vs. France: A Brief History

The USA is 17-2-3 all-time against France, but the last eight games following the meeting at the 2012 Olympics have produced a 4-2-2 record for the USA as France has risen into the world’s elite. The USA’s first loss vs. France came on Feb. 8, 2015, a 2-0 loss in Lorient, France that kicked off the 2015 schedule for both teams, and the second during the 2017 SheBelieves Cup. The USA avenged the loss in Lorient with a 2-0 victory in the championship game of the 2015 Algarve Cup in Portugal as Julie Ertz (neé Johnston) and Christen Press scored.

The most recent meeting between the USA and France came last March at the 2018 SheBelieves Cup, a 1-1 draw in an evenly-played game that saw a few quality chances for both teams in what was a tight match. Mallory Pugh scored for the USA in the 35th minute while Eugénie Le Sommer scored for France just four minutes later. Despite first playing France in 1988, the U.S. Women do not have an extensive history against France, having played just 22 times and only 10 times after a 2006 meeting at the Algarve Cup in Portugal.

In the last few years, USA vs. France has become a very entertaining matchup.

As with almost all World Cup hosts, France is one of the favorites to win this summer’s tournament. France will play in Group A at the 2019 FIFA Women’s World Cup and will face Korea Republic, Norway and Nigeria, in that order. France will open in Paris, face the Norwegians in Nice and the Super Falcons in Rennes. France has not lost in France since the beginning of 2016, compiling a record of 21-0-3 at home over that time. They ended 2018 on a seven-game win streak in which they outscored their opponents, 27-1. In 2018, France saw 15 players get on the scoresheet, led by star forward Eugénie Le Sommer’s nine goals. Gaëtane Thiney had five assists to go along with three goals. Thiney was one of three French players with multiple assists and the only player with more than two.

Several U.S. players have experience playing professionally in France. Lindsey Horan played with and against many of the French players while playing with Paris Saint-Germain. Horan lived and played in France for three-and-half years. Alex Morgan played for three months for Olympique Lyon in 2017, helping the club to the League, Cup and Champions League title. Morgan Brian also had a brief stint with Lyon in 2018. Megan Rapinoe played in Lyon over 2013-2014 while Tobin Heath did a short stint for PSG during a six-month period in 2013. 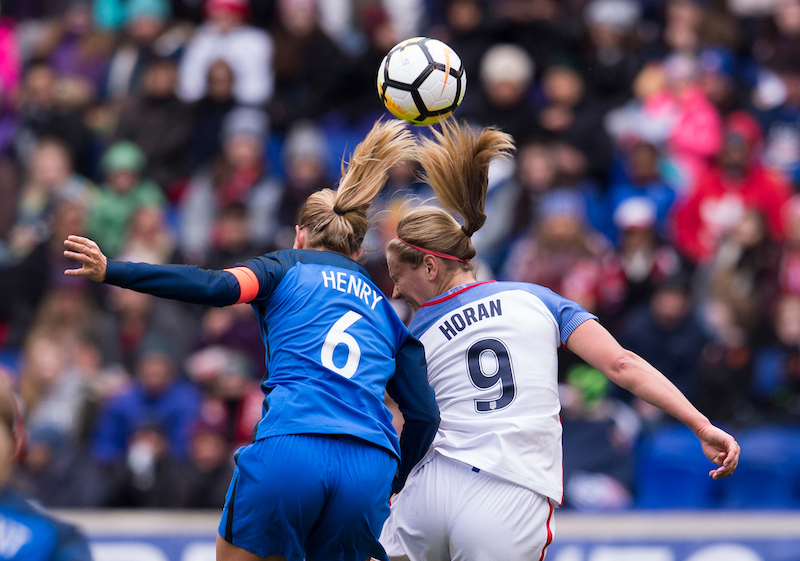 Horan played at PSG for three-and-a-half years. Amandine Henry and Horan also played together in the NWSL in 2016-17.

Although long-time midfield star Camille Abily and several other top talents have retired, France has some experienced players on its roster, including veteran midfielder/forward Thiney, who plays for Paris FC and one of the top attackers in the world in Le Sommer of Olympique Lyon. They are France’s main scoring threats, having combined for more than 120 international goals. Towering center back Wendie Renard missed the 2018 SheBelieves Cup due to an ankle injury but is back in the side for this match and is one of the most dangerous players in the world on set plays. Goalkeeper Sarah Bouhaddi is the long-time starter. She was France’s starter in the 2015 World Cup and 2016 Olympics.

Next Generation for France

France also has a plethora of young players that have come up through the youth National Team ranks and now are making their mark on the senior side. These include, defender Griedge M’bock (who is injured and not available for the match), defender Grace Geyoro, defender Aissatou Tounkara and midfielder Kadidiatou Diani, who were all major parts of the France team that won the 2012 FIFA U-17 Women’s World Cup. Twenty-year-old PSG forward Marie-Antoinette Katoto, who helped lead France to the title at the 2016 UEFA U-19 Championship and to fourth place at the 2018 FIFA U-20 Women’s World Cup in France (she is the only player from the U-20 WWC on France’s roster) – is tied for the most goals in the French Feminine Division 1 with 15 – seven of which have been the first goals of a match (also a league best).
Tags
WNT
2019 FIFA Womens World Cup
5 Things 2 Know
USWNT vs. France - 1/19/2019