Five Things to Know About Chile

Here are five things to know about Chile:

While they haven’t had the historical success like a few powerhouses in South America, Chile’s nine FIFA World Cup appearances rank them fourth all-time in CONMEBOL, sitting only behind the continent’s three World Cup winning nations: Argentina, Brazil and Uruguay.

Chile’s pinnacle performance came when they hosted the 1962 FIFA World Cup, driving to the semifinals where they fell to eventual champions Brazil before finishing in third place.

Chile are currently back-to-back defending champions of Copa América, winning their first continental title on home soil in 2015, before following up by winning the Copa América Centenario in the United States a year later.

Chile narrowly missed out on qualification to the 2018 FIFA World Cup, coming up short on the last day of CONMEBOL’s unforgiving process. Since that disappointment, La Roja has come under management of head coach Reinaldo Rueda, who famously led Honduras to qualification for the 2010 FIFA World Cup with a little help from Jonathan Bornstein and the USA [WATCH]. Rueda also previously managed his home country of Colombia (2004-06) and Ecuador (2010-14).

On the job for a year, Rueda has been tasked with incorporating some of Chile’s young and upcoming talent alongside a strong base of veterans, including all-time leading scorer Alexis Sanchez (Manchester United; pictured right), midfielder Arturo Vidal (Barcelona) and defender Gary Medel (Besiktas).

Chile is using this month’s matches will use this month’s matches against Mexico (3-1 loss on Friday in San Diego) and the United States (March 26 in Houston) as part of its preparation for this summer’s Copa América in Brazil, where they will face guests Japan, Ecuador and Uruguay in the group stage.

The USA and Chile’s first meeting came in a wild encounter during the 1950 FIFA World Cup in Brazil. Played four days after the MNT’s historic 1-0 defeat of England, the U.S. scored two quick goals after halftime to bring things level at 2-2 before succumbing to a 5-2 defeat. 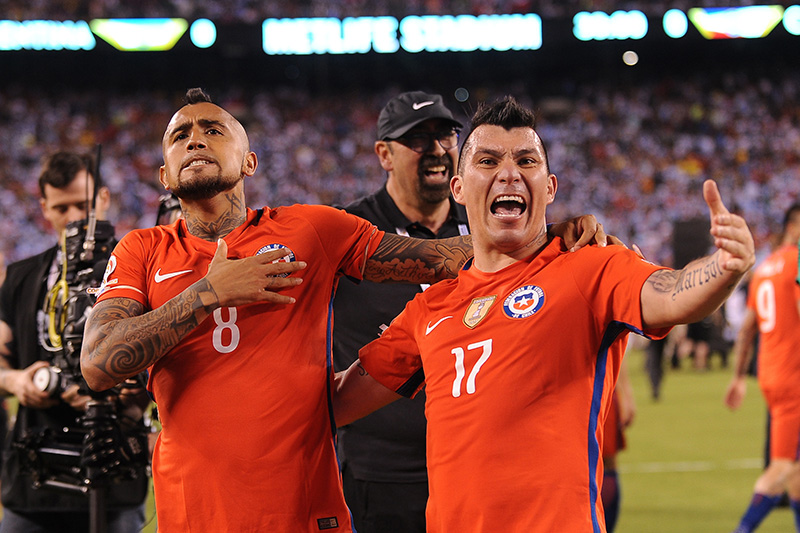 Raul Rueda named a 24-player roster for this month’s matches against Mexico and the United States. The squad is headlined by four players that have over 100 caps: defenders Mauricio Isla, Gonzalo Jara and Gary Medel (pictured right) and midfielder Arturo Vidal (pictured left ).

Check out the full squad below:

Located on the west coast of South America, Chile is a distinctively long country, stretching 2,670 miles from the continent’s midway point all the way to its southern tip. The widest portion of the country is only 217 miles, which means Chileans are never too far from either the Andes mountains or Pacific Ocean. Chile shares a long eastern border with Argentina, and also touches Bolivia (northeast) and Peru (north).

With 17.5 million people, Chile is the sixth most populous country on the continent. The country’s flag looks distinctively similar to that of the state of Texas, while the team’s nickname of “La Roja” is derived from the main color of their home jersey, red.