AFC Ann Arbor, riding on a wave of eclectic talent and a close-knit family-feeling, is back in the U.S. Open Cup for a third straight year.
Jonah FontelaMay 2 2019
Open Cup

You hear the word family a lot around AFC Ann Arbor – in many different accents. The amateur club, based in the iconic midwestern university-town, opens its doors every summer to players from all corners of the globe. The native languages and instincts are as prevalent as they are varied. They come from the sunny shores of Jamaica and Trinidad – from the south of France, Kenya and Canada too – all aiming for the same goal.

“I feel like we’re so fortunate to have players from, literally all over the world,” said fifth-year head coach Eric Rudland on the eve of a First Round date in the 2019 Lamar Hunt U.S. Open Cup against fellow Michigan amateurs Lansing Ignite. “But football is the common language so it doesn’t need any translation.”

From France’s Star Factory
Defender Matthieu Matt Braem, in his fourth season with the club, lugs his thick accent from Toulon, France. He also brings the rare and rarefied lessons he learned in his years at the famed Le Havre academy, where he trained and played alongside some of today’s top global stars including Paul Pogba, Benjamin Mendy and Riyad Mahrez. 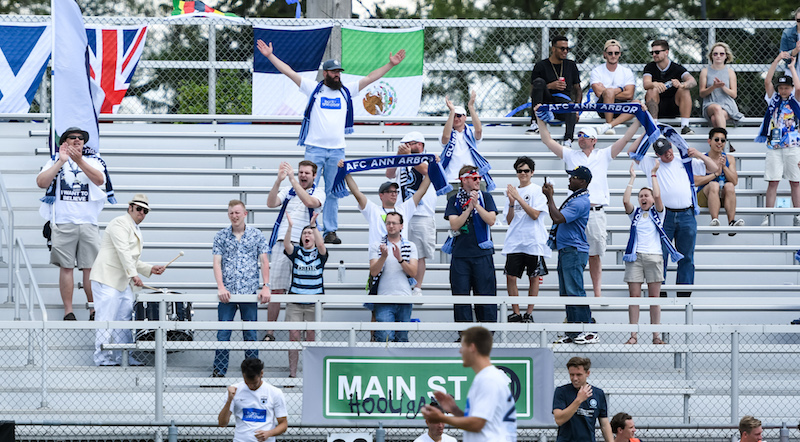 “I played with [Paul] Pogba for six months before he went to Man U [his first stint in 2011] and you could tell he was going straight to the top in the first few minutes he was kicking a ball – he was out of this world,” said the 25-year-old Braem, happy to talk about those days when he was destined and determined for one thing and one thing only – a pro career. “Ben [Benjamin, of Manchester City] Mendy, I played with him for four years – I was left center-back and he was left-back and I tell you did he make me look good! He was a freak athlete and a project of the academy, not a raw talent like Pogba.

“Riyad Mahrez was only at Le Havre for a short time, but I practiced with him,” added Braem, an ironic laugh at how fickle the game can be. “His technique on the ball was just so incredible – and you wouldn’t believe that they cut him after only six months because they said he was too skinny. One year later, he’s winning the Premier League!” 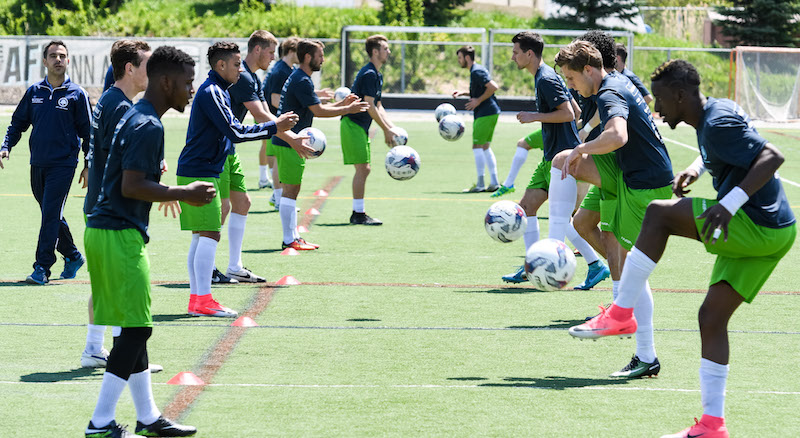 Pogba, Mendy and Mahrez all hit the stratosphere, but Braem hit a wall. Injuries and coaching changes saw him, suddenly, on the outside looking in. A young kid with the rug pulled out. “I was stupid and I didn’t think about anything but being a player,” he told ussoccer.com. I didn’t pay enough attention to my studies but, out of nowhere, someone called and I had a chance to go to America for college. I thought ‘why not’?”

One door closes and another opens, as the old saying goes. Now 25, Braem has a degree in Communications and Sports Management. He’s played soccer in Portland, Maine, Laredo, Texas, Iowa and Chicago. He just signed a five-year professional contract with the Harrisburg Heat indoor side and can’t help but smile about the twists and turns life can throw. One thing is certain, and crystal clear, when talking to Braem: he loves Ann Arbor the city and AFC Ann Arbor the Club. 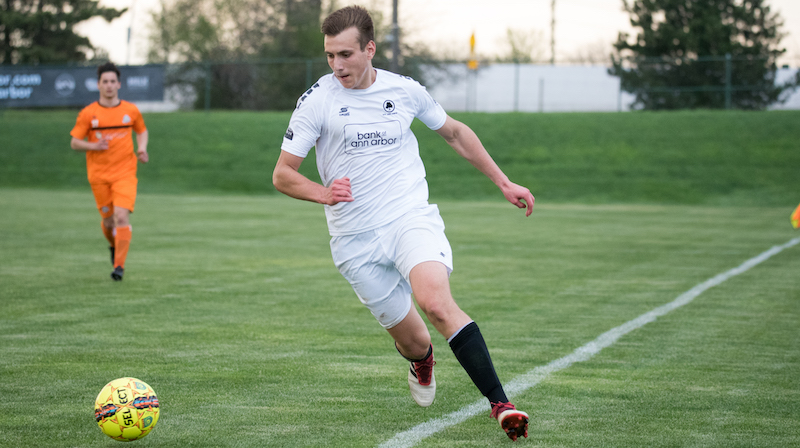 Guys From All Over
“It’s amazing, you have guys from everywhere – all over the world – in this club,” said Braem, wearing a big smile as he describes the way AFC Ann Arbor’s players live together in an apartment complex provided by the club. How they eat most of their meals together and grow together through the course of a summer season. “I can go anywhere in the world and find someone I know from AFC Ann Arbor. Last year we had twelve different nationalities and really isn’t that the beauty of soccer? People of different religions and races all coming together for the same purpose? You go and you play, everyday you’re together and you get close. It’s like a family.”

That word again. Family. Bilal Saeed feels it too, and he fosters it from the Chairman’s level. “We call ourselves the AFC Ann Arbor Family and that takes in the organization, the stands and the community,” said Saeed, who helped start the club in 2014 and guide it to becoming one of the top teams in the National Premier Soccer League (NPSL). “Guys playing from all over the world alongside local guys from Ann Arbor and Livonia, and you see how the barriers that might exist can be easily broken down with a ball.”

Michigan has become a hotbed for amateur and semi-pro soccer and each team seems to have its own particular identity – from Detroit City and their Sunday circus in the stands to Oakland County and their innovative supporters’ trust. But the watchword for AFC Ann Arbor, who have ten different nationalities in the 2019 squad, has to be family. 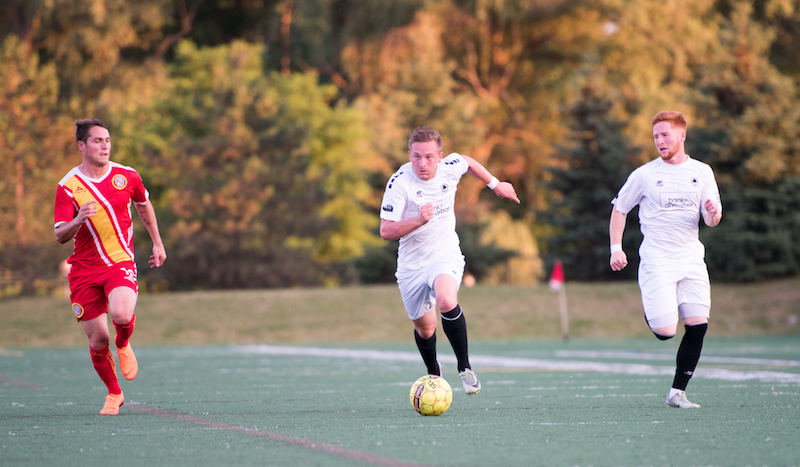 “It really does feel more like a family when you look at the behind the scenes of the club,” said Jake Rufe, the quiet and unassuming midfielder from Huntsville, Alabama. “The guys running things enjoy what they’re doing and that just passes down the ladder. Every year you have some new players coming in, but they’re having to learn the ways we do things here, like they’re being welcomed into something bigger.”

Right Kind of Players
James Vaughan, out of Bexhill-on-Sea, on England’s south shore, feels it too. “Coach Rudland does a great job picking the right kind of players, guys who really want to be here,” said the holding midfielder, in his third year with the club. “And it’s so great to have players from all over the world – you have different cultures and different styles that maybe you’re not used to, but that’s part of the fun of it, bringing all that together. For me, it took a while to adapt to the physical side of the American game – the fast pace and all that. Having all those different cultures blend together makes us all better.” 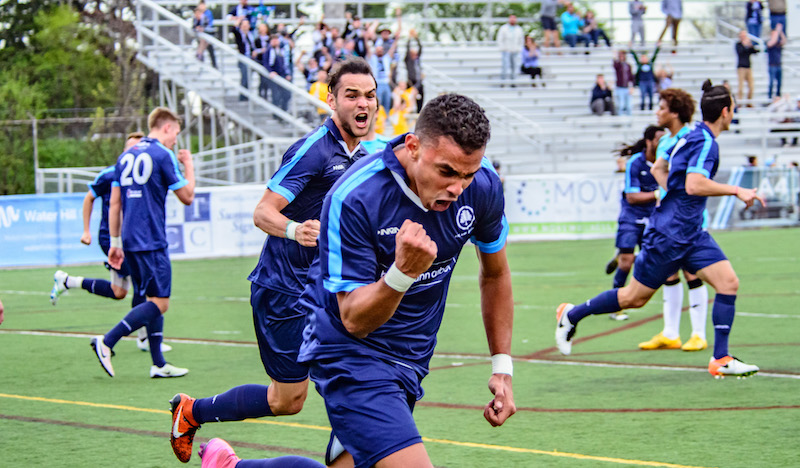 The fun of a summer – living and learning together – will be put to one side when the 106th Open Cup rolls around. AFC Ann Arbor is back for their third straight Cup, and line up against Lansing Ignite of USL League Two (formerly the Premier Development League – PDL) in the First Round on Wednesday May 8. For so many of these youngsters it’s a chance to test themselves and maybe – just maybe – take that next step up a ladder. No matter where they’re from, or what their native language, the opportunity coded into the Open Cup DNA is understood by all. Win and move on. No Tomorrow. David against Goliath. Cupset.

“The motivation for the Open Cup is almost automatic,” said Braem, in his fast French accent. “So many of these players want to move up and play in the USL and they are hungry and if you get something going, you can even play an MLS team.” Rufe chimes in in his slow Alabama drawl: “It’s a big stage, the Open Cup. Anything can happen.” Vaughan, with his South-of-England lilt, knows it too. “We all want to play at the highest level and in the Open Cup you have a chance to show who you are and what you can do.”