Cosmos’ Szetela – Back From the Brink

Danny Szetela was touted as a star-in-the-making even before he signed with a pro team. Now, after fighting back from serious injuries that threatened his career, this son of Polish immigrants talks to ussoccer.com about the Open Cup & second chances.
Michael LewisMay 14 2019
Even before he joined a pro team, there was talk among American soccer fans of a teenage sensation out of Clifton, New Jersey. The second-youngest player on the U.S. team, 16-year-old Danny Szetela scored twice in four games at the 2003 FIFA Under-17 World Cup in Finland.

When he did sign an MLS contract, big things were expected of Szetela in a time when Major League Soccer was pushing youth and star-power in the same package. But cruel knee injuries slowed down the budding star and a third operation that kept Szetela sidelined from the professional game for two years, almost ended his career. 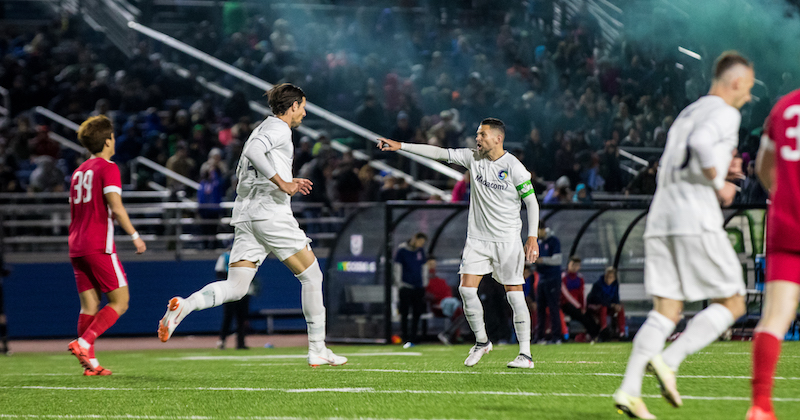 Now an older and wiser 31, Szetela has become a leader for New York Cosmos B, who are vying for Lamar Hunt U.S. Open Cup glory once again. After beating Black Rock FC in the First Round last week, the National Premier Soccer League (NPSL) side heads to Connecticut to meet Hartford Athletic (USL Championship) in a Second Round encounter on Tuesday, May 14 at 7:30 p.m. ET.

Something to Savor
Szetela and his teammates are looking forward to it. But then again, Szetela has learned to savor every game.

"I think it's the love of the game," Szetela told ussoccer.com about the perseverance and drive that kept him going when others might have packed it in. "I grew up playing it since I was a little boy. Having a Polish background, soccer was the only sport.”

Szretela is the son of Polish immigrants.

“We played soccer and nothing else,” he said. “I love the game so much. I always had the drive for it. I wasn't sure what I would do without soccer. Growing up in a neighborhood where other kids start doing drugs or joining groups, I always just had a love for the game. 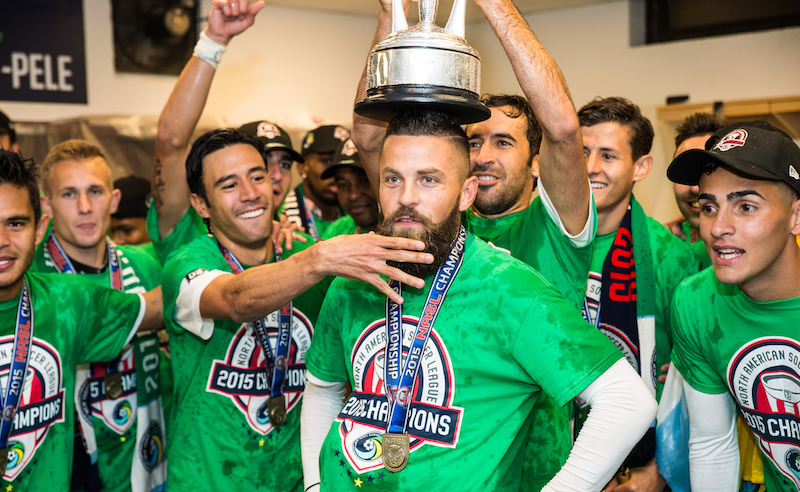 (Szetela and Raul after winning an NASL title with the Cosmos. Photo by New York Cosmos)

"In one way, you can say it almost saved my life,” Szetela continued. “But you've got to continue to do what you love, and I love this game and I hope I can continue to play for many more years."

Szetela's life these days includes four or five days a week of commuting from his New Jersey home to the Cosmos B training base at the Mitchel Athletic Complex in Uniondale, N.Y. on Long Island. It’s nearly 120 miles round trip, which is complicated by the endless traffic that snarls the NY Metro area.

"It really speaks volumes about his character and personality and his work rate," Cosmos B head coach Carlos Mendes said. "It's not easy coming back from an injury like that."

The year 2004 seems like a lifetime ago. For Szetela, it was more like half a lifetime. As a teenager, he had been courted by Premier League giants Manchester United and Everton,but he decided to join Major League Soccer instead.

Szetela in Demand
He was a hot commodity, having forged a reputation as an aggressive ball-winner who did not shy away from tough tackles. He had just graduated from the U.S. Soccer Residency in Bradenton, Florida, being named the 2004 Parade High School Player of the Year and was included as one of the top 50 teenagers to watch in World Soccer’s August 2004 issue.

Despite being headstrong in his desire to play for his hometown MetroStars (now New York Red Bulls) Szetela ended up, reluctantly, at Columbus Crew in Ohio. He played 34 games over four seasons, before deciding to try his luck in Europe, but not before enjoying a memorable U-20 World Cup in Canada in 2007. He outdid himself, scoring in a 1-1 draw with South Korea before tallying twice in a 6-1 rout of Poland, an emotional match for Szetela.”

He was with Racing Santander (Spain) from 2007-09 before being loaned out to Brescia (Italy) in 2008-09. He returned to MLS to play for D.C. United in 2009 but was forced to undergo three operations on his right knee. His rebuilt knee includes a meniscus from a cadaver. 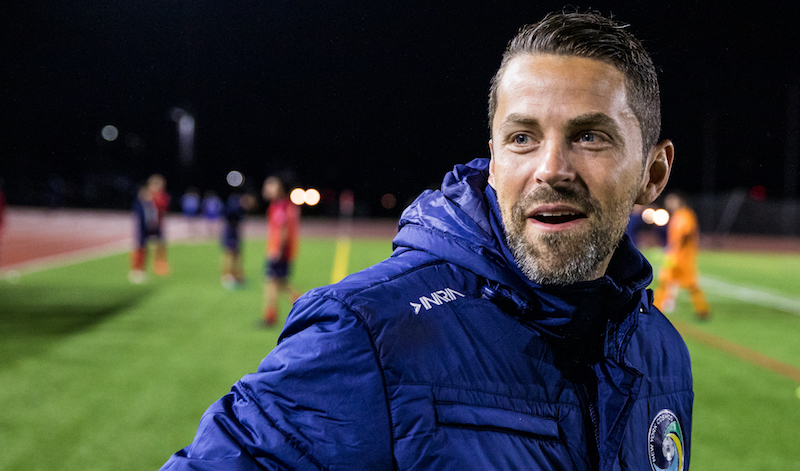 "When it first happened, I didn't think it could be the end,’ he said. “When I got injured with D.C., I was rushed back and didn't do enough rehab or rest to let it heal. Two, three surgeries later, that's when you start thinking that maybe it's time for the end."

But Szetela, stubborn as ever, refused to concede that his playing days were over.

"I kept working hard," he said. "It's depressing at times. Almost three years out of the game that I loved so much, watching your friends on TV, not being able to be on the field to play against them or with them. It was difficult.”

In 2011, life got even more complicated when Szetela was arrested for an altercation at a bar. He jumped into a fight to help his brother, who was being assaulted. Szetela realized that could jeopardize his chances of a return to the game. “It definitely crossed my mind,” he told Matthew Levine of NASL.com in 2016. “When all these incidents happened – getting injured, the thing with my brother, arrested – it’s part of life, but I don’t regret any of it.”

Szetela's comeback started in the 2013 Open Cup with a team called Icon FC, who played in the amateur Garden State Soccer League in his native New Jersey. Icon FC beat the Brooklyn Italians in the opening round, 4-1, before being eliminated by the Richmond Kickers (USL League One) in the Second Round, 4-1.

Another Shot with the Cosmos
One of Szetela's Icon FC teammates was Cosmos assistant coach Alecko Eskandarian, who arranged a tryout through then head coach Giovanni Savarese with the NASL club.

Szetela not only made the team but he became an influential player alongside the likes of Spanish international Marcos Senna, many times his central mid partner, and world icon and legendary Real Madrid striker Raul. He helped the Cosmos win NASL titles in 2013, 2015 and 2016.

Szetela states that he was "very grateful" to still be playing.

"It's been a long career so far," he added. "It's a blessing. A lot of players play five years, 10, then retire. I'm going on now I think 15-16 years and still want to play. The body's still feeling good. As you get older, you realize things, food, fluids and everything. The body is feeling great.” 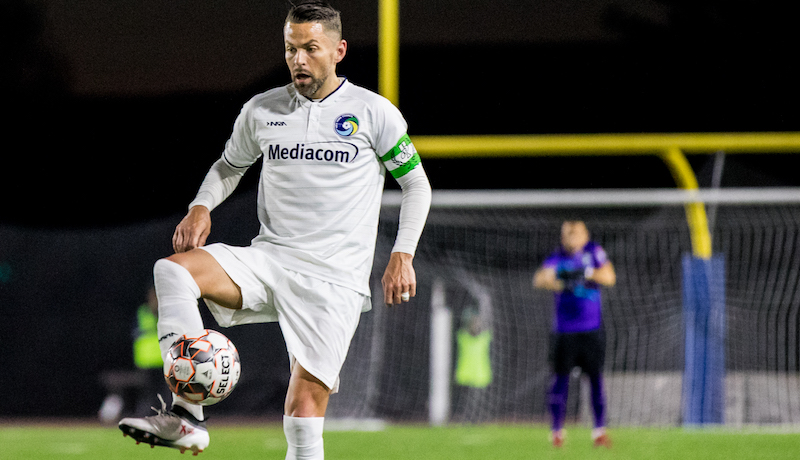 (Szetela has the full respect of his coaches & teammates both. Photo by Matthew Levine/NY Cosmos)

In the U.S. Open Cup, Szetela also played a role in some memorable cupsets as the Cosmos eliminated the New York Red Bulls in 2014, New York City FC by a shootout in 2015, and NYCFC again with his 88th-minute goal in 2016.

"I love this club," said Szetela, named Cosmos B captain last year. "They gave me a second chance when nobody else would and my heart bleeds green and white. Being a captain here is a big honor. It's something that I will never forget."

It’s not surprising that Szetela has earned the respect of his current teammates. "Danny's a great captain," forward Bledi Bardic said. "He's a great guy, he works hard. He's a leader. He pushes us when we can't go. He motivates us to go. He's always there to take care of us in any way he can."

The Obvious Leader
Veteran defender Kevin Venegas played against Szetela and the Cosmos while with Minnesota United (NASL) from 2013-16. When he joined the club this winter, Venegas knew who the leader was without asking a question. "I came here, and it was easy to tell who was in charge,” Vanegas said. “It was obvious who was the leader.”

Cosmos B are in the middle of a busy stretch of games and the club will look to their veteran captain Szetela for leadership. "It's going to be difficult, but we need everybody to be ready," he said, noting the big Open Cup Second Round game against Hartford Athletic on Tuesday. 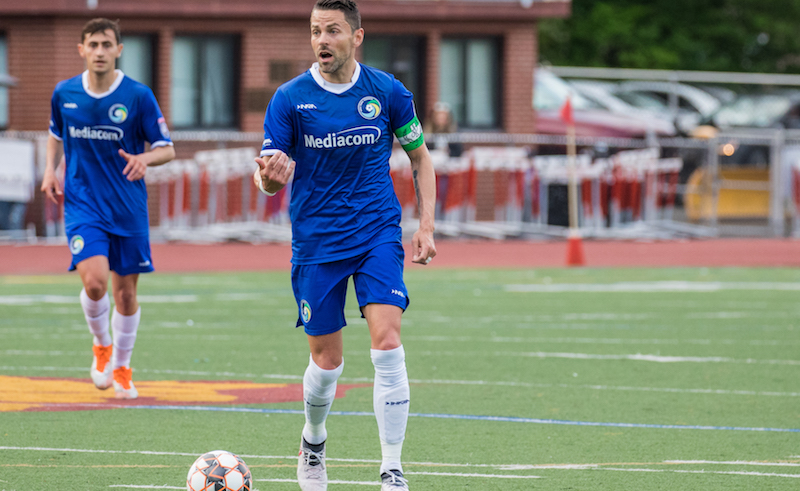 And Szetela, back doing what he loves, doesn’t plan to hang up his boots anytime soon. "This is the place I want to be for the rest of my career," Szetela said with a smile. "I want to retire as a Cosmos player and play another four years here. Maybe 10, I wish. The drive is there, every day coming into training, working hard, pushing the younger guys and trying to have success for this club, myself and prove people wrong."

But first things first for a now-mature and appreciative Szetela, who is keenly focused on another Open Cup game in Hartford. “Come Tuesday, we have to win to move on,” he said matter-of-factly, like any good leader. “It's the Open Cup. We have to do the right things."