Meneses & Co Soldier On In SoFla

Playing on the road in North Carolina on Tuesday May 14th, Godoy and Meneses team up to lead all-amateur underdogs Florida Soccer Soldiers (USASA) against Charlotte Independence (USL) in the Second Round of the Lamar Hunt U.S. Open Cup.

“I’m lucky to have the kind of players who are that committed and that proud,” Godoy said. “When you have dreams of living and breathing football, you’re always looking to reach as high as possible.”

Godoy is a former Venezuelan National Team player with multiple international appearances, and he played in three Copa Libratadores with hometown club Caracas FC. Well known around South Florida, Godoy had stints with Miami United (NPSL) in 2016 and Miami Fusion (NPSL) in ’17.
“I would not be here but for the confidence and love of the technician Daniel Godoy,” Meneses in a recent interview.

Meneses, now 32, previously played for Atletico El Vigia in the Venezuelan Primera Division, and now is getting the opportunity at a starring role with Soccer Soldiers, currently South Florida’s top amateur club. “I had the blessing of having been a professional for many years in my country Venezuela, but I am currently where I should be, being in a club that respected me and where I feel appreciated and valued,” Meneses said.
But the history-making moment for the club almost didn’t happen after Meneses failed to convert a potential game-winning penalty kick in the 70th minute of last week’s First Round game against Miami FC. The player, with hopes of his teammates on his back, left the ball where it was easy for Mark Pais, in the Miami FC goal, to save it.

“I felt a void when I could not finish after the effort of all my teammates, but the moment I failed the penalty I came back because I had the support all my teammates,” Meneses said, still remembering, nervously, that missed spot kick.

The crafty Venezuelan midfielder immediately worked to get another crack at goal, and he was able to put away the match winner in the 87th minute as Soccer Soldiers upended the reigning National Premier Soccer League (NPSL) champions, 2-1, on Wednesday, May 8th in one of the biggest upsets of the Open Cup’s First Round.
“I felt satisfaction, pride and relief when I saw that the three points were ours,” said Meneses about his goal – a quick touch to control and then a thunderous volley – and the club’s first USOC victory. 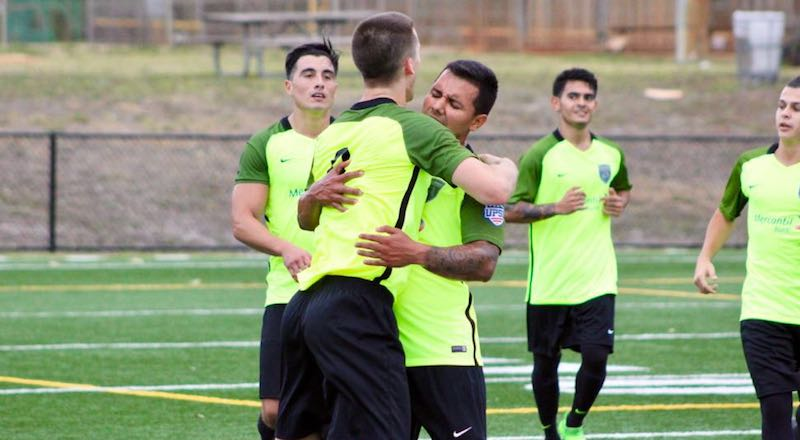 (The Soccer Soldiers never gave up in the First Round against Miami FC)
Godoy, the player-turned-coach, knew he could trust Meneses in midfield and he wasn’t surprised that the man he brought to lead his team did a job on the night.  “We knew it was going to be a hard game and we made some adjustments,” Godoy said. “When we went down one goal I said, ‘We have to do something here,’ and among the midfield players - Godoy was excellent.”

With the club’s first ever matchup against a USL Championship club up next, Meneses and Co. are likely to receive even more attention as one of the last remaining full-amateur teams in the tournament, the 106th running of the U.S. Open Cup – U.S. Soccer’s national championship.
“There is a lot of talent where many eyes do not dare to see, Meneses said, a fact that was backed up with the Soldiers sturdy and determined performance against an all-pro Miami FC side that went up early and was expected to win out with ease. “But it is all in your discipline and passion for what you love (and) soccer is joy for me.”
“We are very excited to be playing in the Second Round of the Open Cup,” Gody concluded, with a belief growing that maybe, just maybe, anything is possible.  “And we look forward to the challenge.”
Tags
2019 US Open Cup
Open Cup