Milwaukee Bavarians SC, back for another tilt at the 2019 U.S. Open Cup, have been known by many names in their 90-year history. But whatever you call them, they are up there among the top amateur clubs in the history of American Soccer.
Jonah FontelaMay 2 2019
Open Cup

Voices call out from the inky past around the Bavarians’ stadium on game days. This is no abstraction. The old-timers, literally, huddle near the concession stand and murmur about the state of play today and compare it to the old days. At this 90-year-old amateur club, a few miles north of downtown on the muddy banks of the Milwaukee River, the past grumbles, whispers and shouts – it always has a lot to say.

“This is a club built on tradition,” said Braden Andryk, 22, who helped keep that long tradition of success alive in 2018 when he was named UPSL Player of the Year and helped capture a National Amateur Cup crown and a Spring National Championship. His brother Logan, older by a pair of years, agreed, “To add two more stars over this crest is special and it doesn’t just happen overnight. It’s built up over years, like close to a hundred years.” 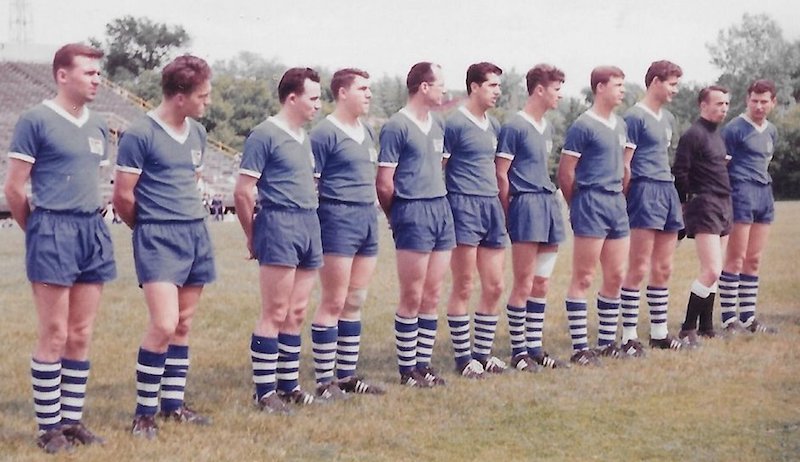 (This is now, but that was then -- former USA national team coach Bob Gansler is 4th from right)

The 2018 National Amateur crown came after a win over West Chester United – sweet relief for Bavarians SC after losing in the final the two previous years. It also qualified them directly for the 2019 Lamar Hunt U.S. Open Cup, reviving nostalgic echoes of the days they went to a Semifinal and the Final in consecutive years (1993 and 1994). “It was always something we wanted to do; to get back to the Open Cup,” said Logan Andryk, currently in his first year of medical school. “We saw Christos [local amateurs out of Baltimore County] two years ago get the chance to play D.C. United, and NTX Rayados last year, they played the eventual champions Houston Dynamo. How cool would it be to be in that same position, representing this club, wearing the Bavarians shirt?”

German Beginnings
The storied Bavarians began life in 1929 as Fussball Club Bayern. They’re still among the top amateur teams in American soccer history and one of only a handful with their own stadium. In the old days, visiting top German professional teams like Bayern Munich, Stuttgart and Frankfurt, played friendlies there. The club made one appearance in the U.S. Open Cup Final and went on to earn seven national amateur titles (five National Amateur Cups and two National Amateur Open Cups). The Bavarians are known as much for their success on the field as they are for their firm roots in the history of soccer in this country. It’s worth noting that the first soccer game in America was played in Waukesha, a few minutes away from Milwaukee, way back in 1866.

“My first memories are of going to the club and watching my dad play,” said Bob Gansler, whose father and namesake played for and coached the Bavarians before going on to coach the U.S. National Team at the 1990 World Cup. Now an engineer in Minnesota, Gansler (the younger) spends his free time unearthing old photos and newspaper clippings about the Bavarians through history, making sure the tradition is kept alive, vital and vivid. “I remember it like yesterday, going to the field with my friends and playing our own games on the training pitch, peeking over at our fathers and uncles playing for the first ream.” 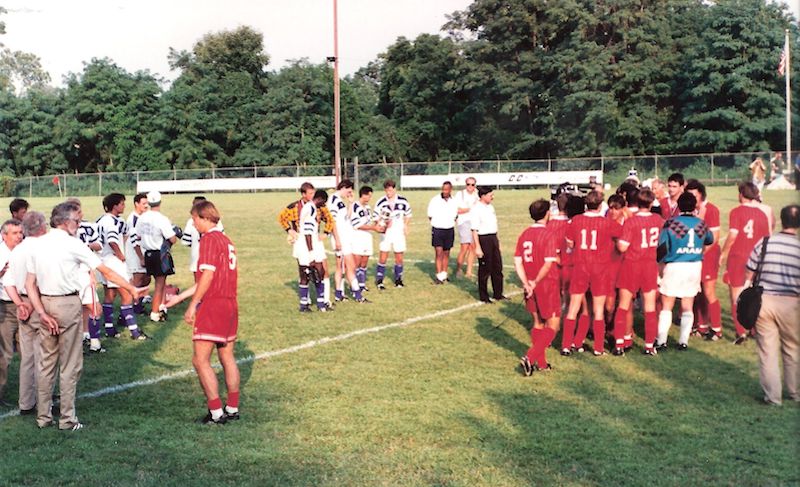 Gansler made his Bavarians debut at age 16, his father cutting short a family weekend getaway to make sure the boy didn’t miss his chance to pull on the blue-and-white jersey that Sunday. He speaks of the club with a reverence usually reserved for a family member. “The big Christmas party every year, the stage plays our parents forced us to be in,” laughed Gansler, a sweeper in the side that reached the U.S. Open Cup Semifinal in 1993 and the Final a year later. “Oktoberfests and summer picnics at Breezy Point. It was definitely more than just the soccer games.”

Strong Bavarian Bonds
While Gansler keeps the club and its history alive, his former teammate Tom Zaiss helps run the youth academy. Brian Tompkins, another teammate from the past and former coach at Yale University, is still involved too. Bavarian bonds don’t break easy.

When talk turns to that 1994 Open Cup Final, played on a sunny late-July afternoon at the home of the United German-Hungarians, there’s still a little hurt around the edges. “It was a big loss, that one in ’94,” said Gansler, who played three years at Princeton under then coach Bob Bradley, about the 3-0 defeat that saw the Bavarians finish runners-up – to date the closest they’ve come to laying hands on the Open Cup. “They [The Greeks] were an outstanding team. Their level of play was high and I must say that it was one of the best teams we every played. Can’t argue with the result.” 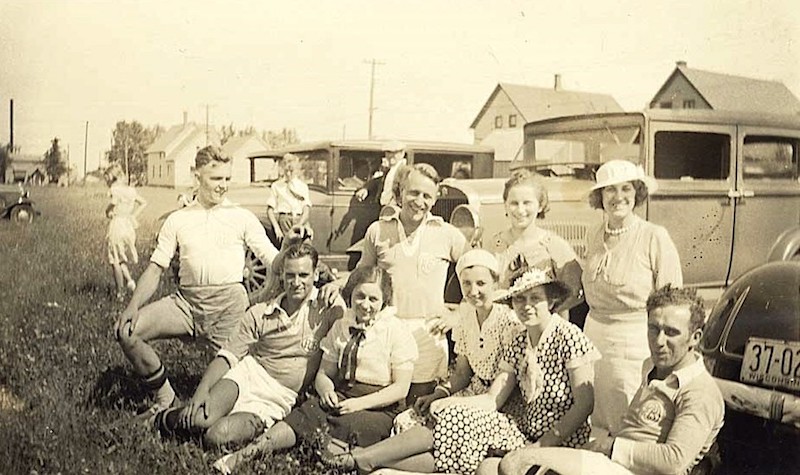 “After having gone to the Semifinal the year before in 1993 [losing 3-0 to CD Mexico – now El Farolito, who are back in Open Cup action this year], we were pretty confident,” said Tom Zaiss, a former standout at UCONN, who will be on the bench as assistant coach for the Bavarians’ return to the U.S. Open Cup against Forward Madison of USL's League One. “The ball was bouncing for them [the Lothar Osiander-coached Greek Americans] and it seemed like maybe it was just going to be one of those days when it was like Christmas for them and no luck at all for us. And as skilled and composed as they were, they’re a bad team to be down against. Half that team ended up in the early days of MLS [launched in 1996].”

End of an Era, New Beginnings
That 1994 loss signaled the end of an era for the Bavarians, and their last run in earnest at an Open Cup. “We had a lot of guys who were in their 30s and not getting any younger,” said Zaiss, who calls it “an honor” to be back in the country’s oldest Cup competition – at 106 the Open Cup is 16 years older than the Bavarians themselves. “There was a lot of rebuilding the club had to do after that and it was a long time before we were back in and competing for the Cups.” 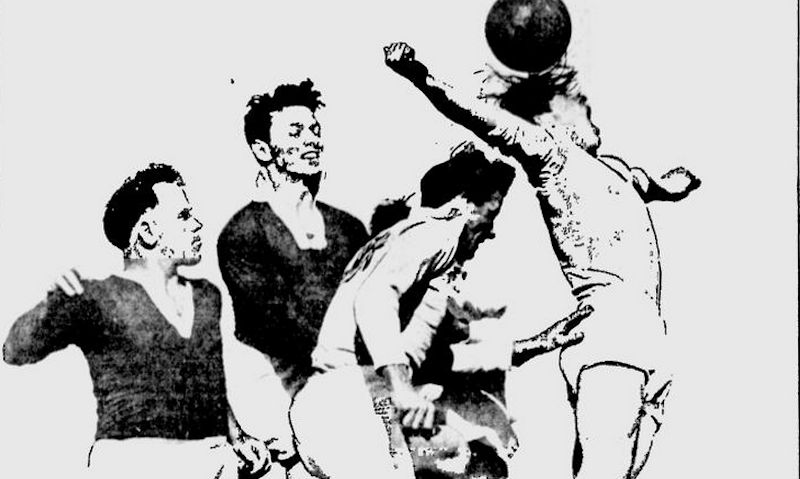 (Way, way back -- an early image of the Bavarians from a local paper)

“The old guys, guys even before my dad’s generation, they were always there,” added Gansler with a laugh, thinking back on those days in the mid-1990s when the Stadium was full of well-wishers and avid supporters, locals behind their team all the way. “The old-timers yelled at us in German about how bad we were. Then, after the game, they’d run out on the field and celebrate with us. They’d buy us drinks at the upstairs bar at the clubhouse and they’d tell us how great we were. That’s a bit of the tradition too.”

Today’s Bavarians are well aware of the large footsteps they’re walking in – and the broad shoulders they’re standing on. Just ask the 2018 team MVP Andryk brothers, or any of their teammates who hold down day-jobs and play for the Bavarians only because they love it. These players of today keep tradition alive and make sure their little brothers and young sons have someone to idolize until their own calls come. “A lot of the guys who played in the Sixties and Seventies are still here. They talk to us and have a beer with us after our games,” said Braden, knowing the power of that crest and those blue-and-white stripes. “That’s what it is to be part of this club – and you can’t help but be proud to continue a legacy like that.”