CLASH FOR THE CONCACAF CROWN: After six straight wins to open the 2019 Concacaf U-17 Championship, the U.S. Under-17 Men’s National Team is set for a showdown with archrival Mexico in the tournament final. With a berth to this fall’s FIFA U-17 World Cup in Brazil secured, the USA sets its sights on a fourth Concacaf title at this age level, and its first since 2011.

Since its opening match, the USA has not trailed and the team hasn’t allowed a goal over its last 396 minutes of play, winning six straight at the tournament. Mexico narrowly defeated Haiti 1-0 in its semifinal to clinch a spot in the confederation final after clinching its 14th U-17 World Cup appearance with a 5-1 quarterfinal win against El Salvador. 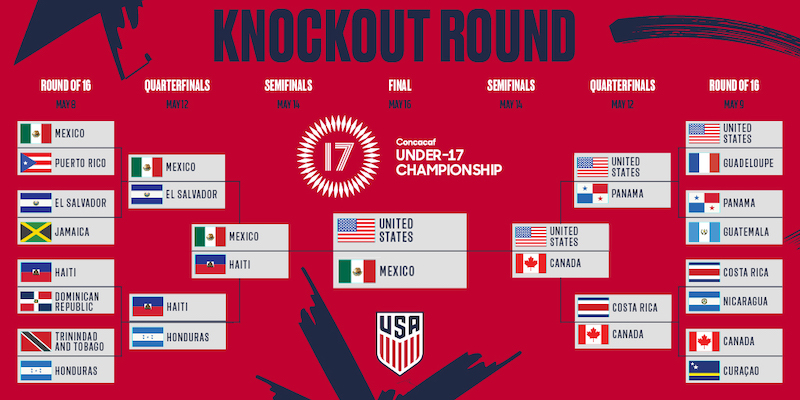 ON TO THE FINALAfter punching its U-17 World Cup ticket with a 3-0 quarterfinal win against Panama, the USA unleashed another storm of second-half scoring to top Canada 4-0 in the semifinals. The U.S. threatened throughout the first half, though wasn’t able to find the back of the net. That changed shortly after the break, when Bryang Kayo slotted home his first international goal. Gio Reyna scored on a free kick from just outside the 18-yard-box in the 63rd, while Ricardo Pepi bagged a late brace in four minutes with goals in the 78th and 82nd. Gianluca Busio took home Man of the Match honors after setting up all three of the USA’s goals from the run of play.

Reyna’s goal was good for his sixth of the tournament, and third from a dead ball situation. His six goals put him alone in second for the competition’s Golden Boot race. The current scoring leader, Costa Rica’s Geancarlo Castro, has been eliminated.

After collecting all nine possible points in Group F and with three wins in the Knockout Round, the U-17 MNT is riding an 11-game unbeaten streak dating back to last October. The U-17s have also put together four straight clean sheets, not allowing a goal in their last 396 minutes of play. Dating back to the 2015 tournament, the USA also rides a 13-match unbeaten streak at the Concacaf U-17 Championship into Thursday’s match.

Busio led the USA in scoring with five goals, while Ocampo-Chavez, Reyna and Scally also found the back of the net, while Las kept three clean sheets. The U-15s won their group with three straight wins and topped Panama 3-0 in the semifinals before falling to Mexico 2-0 in the championship match.

MEXICO’S PATH: Alongside the USA and Haiti, Mexico was one of three teams to collect all nine possible points in the group stage. El Tri topped Jamaica 1-0, downed Bermuda 5-0 and defeated Trinidad & Tobago 5-0 to claim the top spot in Group E.

In the Round of 16, Mexico faced a tough challenge from Puerto Rico, trailing for most of the first half before coming away with a 2-1 victory. Mexico rolled El Salvador 5-1 in the quarterfinals to clinch a World Cup bid, then battled Haiti to a narrow 1-0 win in the semifinals.

Mexico has won seven Concacaf U-17 Championships and is aiming for its fourth straight confederation title.