After a stint away with FC Cincinnati, hometown hero Nazmi Albadawi makes a return to North Carolina FC just in time to guide the USL Championship side into the meaty rounds of the U.S. Open Cup.
Jonah FontelaJune 8 2019
Open Cup
Nazmi Albadawi wasn’t able to watch North Carolina FC’s last Open Cup game. He had his eyes on the road, driving the 500 miles from Cincinnati, Ohio to his hometown club near Raleigh, where he broke out as a rookie in 2014 – the Open Cup his springboard.
“FC Cincinnati is a great club with great fans, but it was never like being home,” said Albadawi about his year and a half in Ohio. “North Carolina FC is so much a part of my life and when the opportunity came to come back home it was really hard to say no. On the field, off the field, all of it – I’ve got family so close by and my friends are here to support me. I give my all for this club and it’s just the place that fells like home. 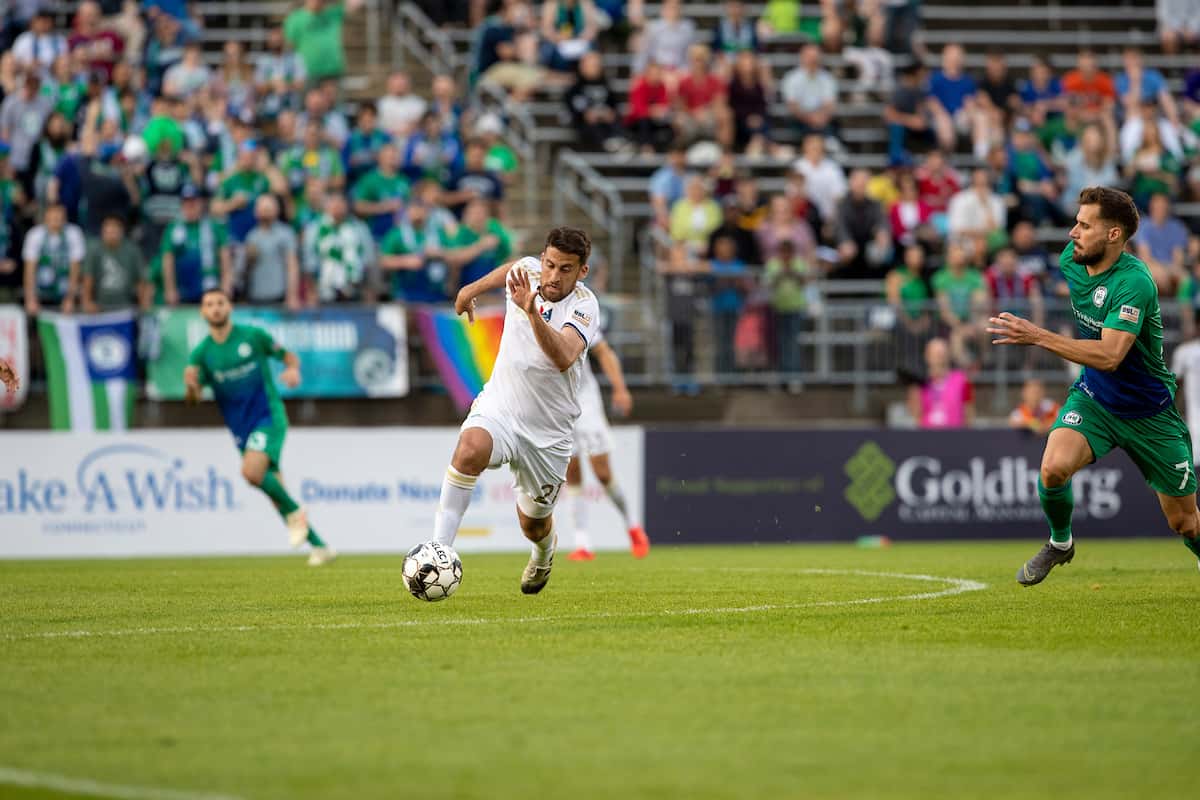 Albadawi in Hartford, CT in his first game back with NCFC

The 27-year-old Albadawi uses that word – home – a lot when he talks about North Carolina FC. It comes out soft and safe, almost a sigh of relief when he describes returning to Cary, NC – where he was born and raised and received a soccer education in the stands as a young fan of the then RailHawks. “The last six months were really difficult,” added Albadawi, as sharp off the field as he is on it, describing a difficult stretch in which he saw just ten minutes of playing time since FC Cincinnati graduated from the second pro tier to MLS last January. “I want to get back to where I’m enjoying the game. I want to have fun at training every day and I want the great environment like we have here.”

Albadawi’s family, of Palestinian origin, emigrated to the U.S. after the Iraqi invasion of Kuwait in 1990. He was born in Raleigh a year later and raised on its outskirts. He grew up watching the RailHawks (now NCFC) from the bleachers and played in the club’s youth ranks on breaks from four standout years at NC State. “It was a big deal when I started going to RailHawks games,” said the cultured midfielder, known for a wicked free-kick and outstanding vision who spent his first four years as a pro with NCFC’s first team from 2014 to 2017.

The midfield creator isn’t returning to the same club he left. His old Coach Colin Clark, the former Northern Ireland player who gave Naz his first taste of pro soccer, left last year. An influx of new talent arrived while Albadawi was away – like Nigerian midfielder Victor Igbekoyi, Donovan Ewolo of Cameroon and Bosnian powerhouse Robert Kristo who has two goals in the 2019 edition of the Lamar Hunt U.S. Open Cup. 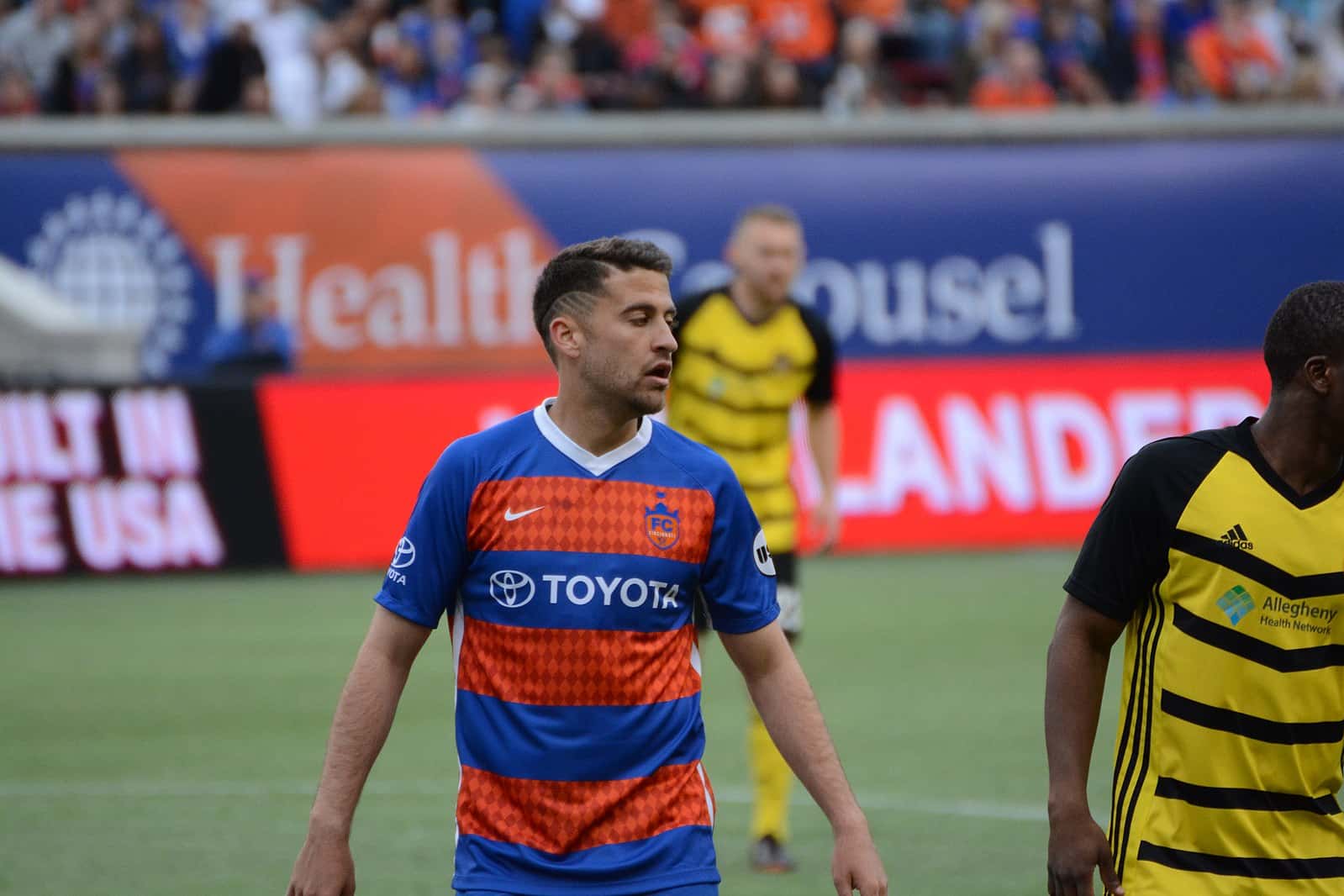 New NCFC coach Dave Sarachan might even hold a tiny grudge against the returning hero.“[Sarachan] was coaching the LA Galaxy team we upset in the Open Cup in my rookie year,” Albadawi said with a chuckle, thinking back to that formative moment in his soccer development. “We haven’t talked about it yet, but maybe we will a little farther down the road.”

Albadawi’s respect for his new coach couldn’t be more evident. “[Sarachan’s] been great in the few weeks I’ve been back. He’s someone you can talk to about anything and I can already feel I’m learning from him and getting better.” It’s a feeling that goes both ways, with Sarachan – former U.S. National Team and Chicago Fire boss – thrilled at the return of a homegrown standout, “The quality that [Albadawi] brings on the field, with his vision and technique and experience, is going to improve us quite a bit.” 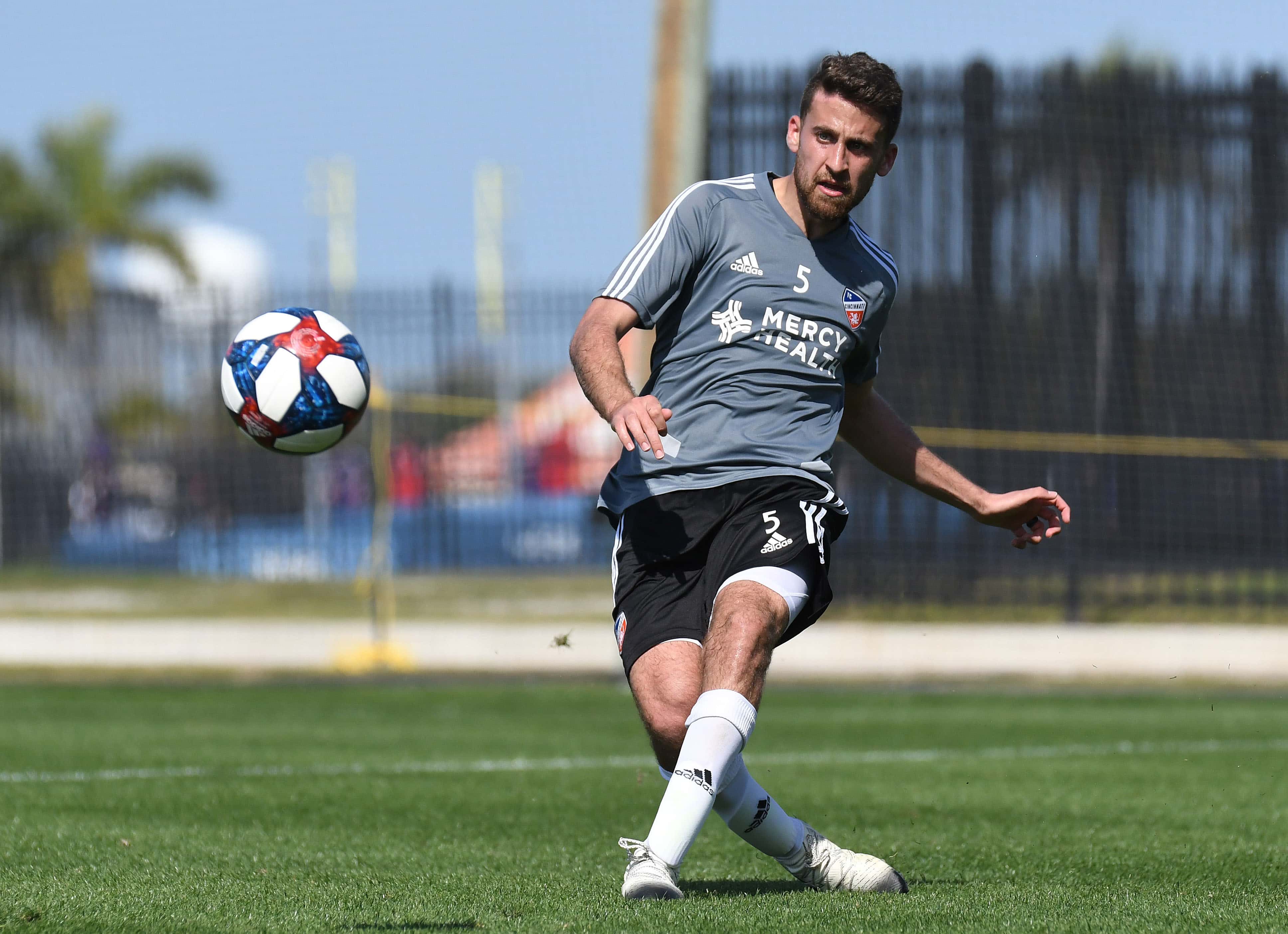 Albadawi’s return to the club coincides with the Fourth Round of the Open Cup, the point at which Major League Soccer sides join the party and big upsets traditionally occur. By the time North Carolina FC face New York City FC up in the Big Apple, Albadawi will have two league games under his belt. Even with such a short runway, you get the sense he’s up for the Cup.

“Man, It’s such a special tournament,” said Albadawi, who made his debut in the 2014 tournament where NCFC (then still the Carolina RailHawks) beat Chivas USA and LA Galaxy to reach a Quarterfinal. “You win or you go home. There’s no next week to make up for a bad performance. This will be NCFC’s first time playing New York City FC. It’s a real challenge, but upsets always happen. They just do.”

The amateur @SoccerSoldiers gave good account of themselves in Cary, NC, but there was no stopping @NorthCarolinaFC, who picked up the 1-0 win & a place in the Fourth Round.

The midfield schemer knows this fact better than most. Anything Can Happen might as well be stamped across every Open Cup match ball. “When we beat the Galaxy back in 2014, it was like we were in a dream,” said Albadawi about the day when his second division side beat a glitzy LA Galaxy that would be crowned champions of MLS later that year. “I mean, you were there at the end celebrating and Landon Donovan and Robbie Keane were on the losing side, walking to their locker room. It was a huge deal and something you just don’t forget. It’s the best Open Cup memory I have and one of the best of my career.”

Following NCFC as a devoted fan during his time up in Southern Ohio, Albadawi saw his hometown side brush off the Richmond Kickers with ease (4-1) in the Open Cup’s Second Round. Then they picked up the potential banana skin of Miami amateurs Florida Soccer Soldiers and placed it gently in the nearest trash bin, winning 1-0 in the Third Round. There seems to be a blooming Cup chemistry in the team, having navigated the raucous early rounds conceding just one goal and scoring five. And when Albadawi describes what’s needed for a deep run, he could well be talking specifically about the qualities NCFC possess in 2019. 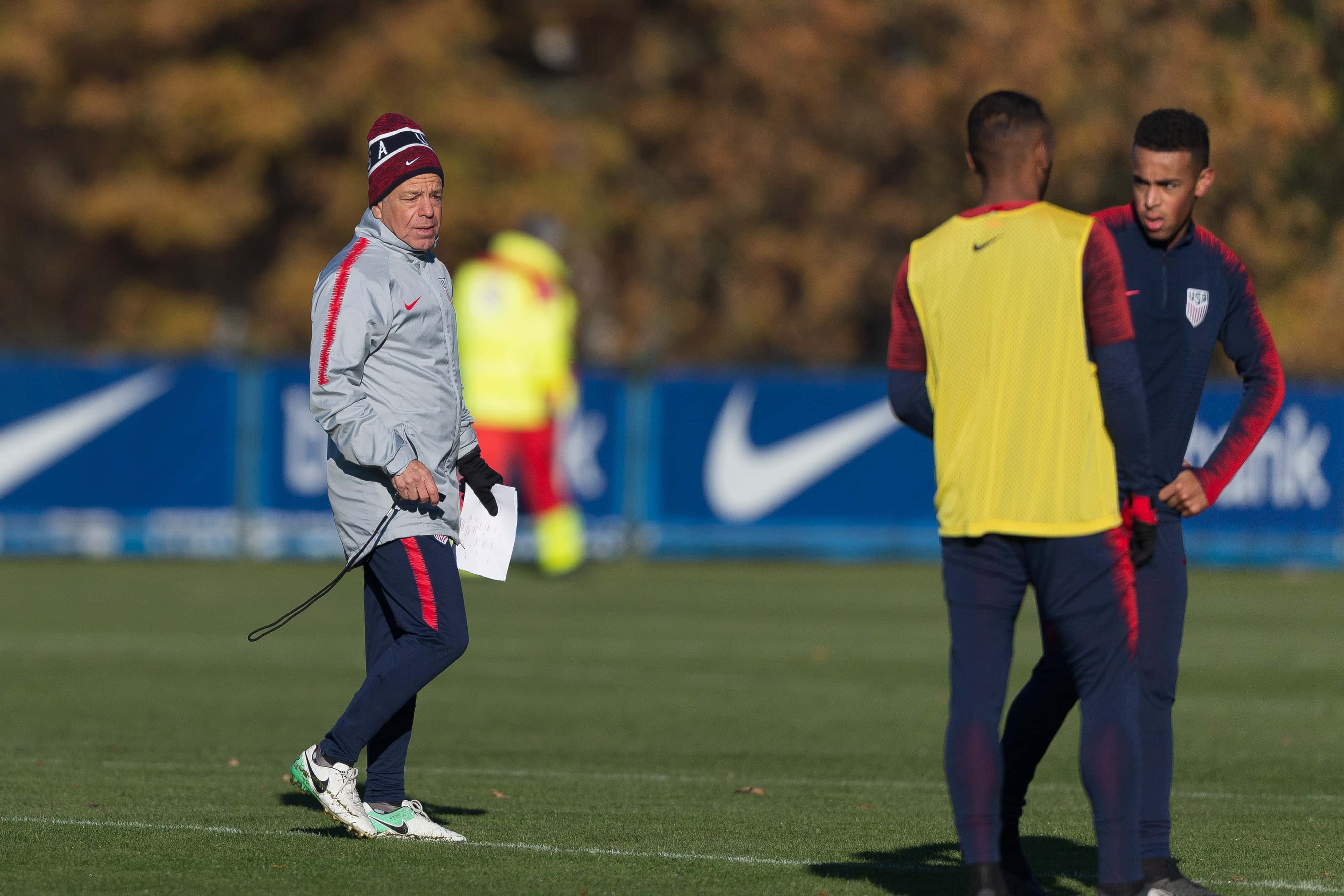 Dave Sarachan – former USA coach – is in charge at NCFC

“The key is being steady,” said Albadawi who’s played five times for the Palestinian national team, scoring one goal. “Try not to make mistakes and make sure you take your chances in the attacking end. Being clinical is so important, because Cup games are mental in many ways. Also, just play the game. Don’t put too much hype on it. It’s another soccer game, so don’t try and do too much.”

So far NCFC are doing just enough. They’re within touching distance of the play-off places in the USL Championship and look a good outside bet for a long, giant-killing run in the Cup. With the addition of an old hero, a local light with something to prove, things are only looking sunnier in Cary, NC. “It just feels so right to be back home,” said Albadawi with that same sigh that sounds a little like a warning to NYCFC fans. “I’m ecstatic to be back home and I want to show what I can do for this club again.”