Veteran defender Atiba Harris knows all about FC Dallas’s drive for the U.S. Open Cup, but now he’s out to hurt – not help – their chances with Fourth Round foe OKC Energy.
Frank Dell’ApaJune 5 2019
Open Cup

Competing for the Lamar Hunt U.S. Open Cup has special meaning for FC Dallas, the trophy being named for a progenitor of the club. And, after four seasons playing for FC Dallas and winning an Open Cup title, Atiba Harris has a keen understanding of its significance.

But Harris is now a member of the opposition, and he will lead OKC Energy FC against FC Dallas in a Fourth Round U.S. Open Cup match at SMU’s Westcott Field on June 12. 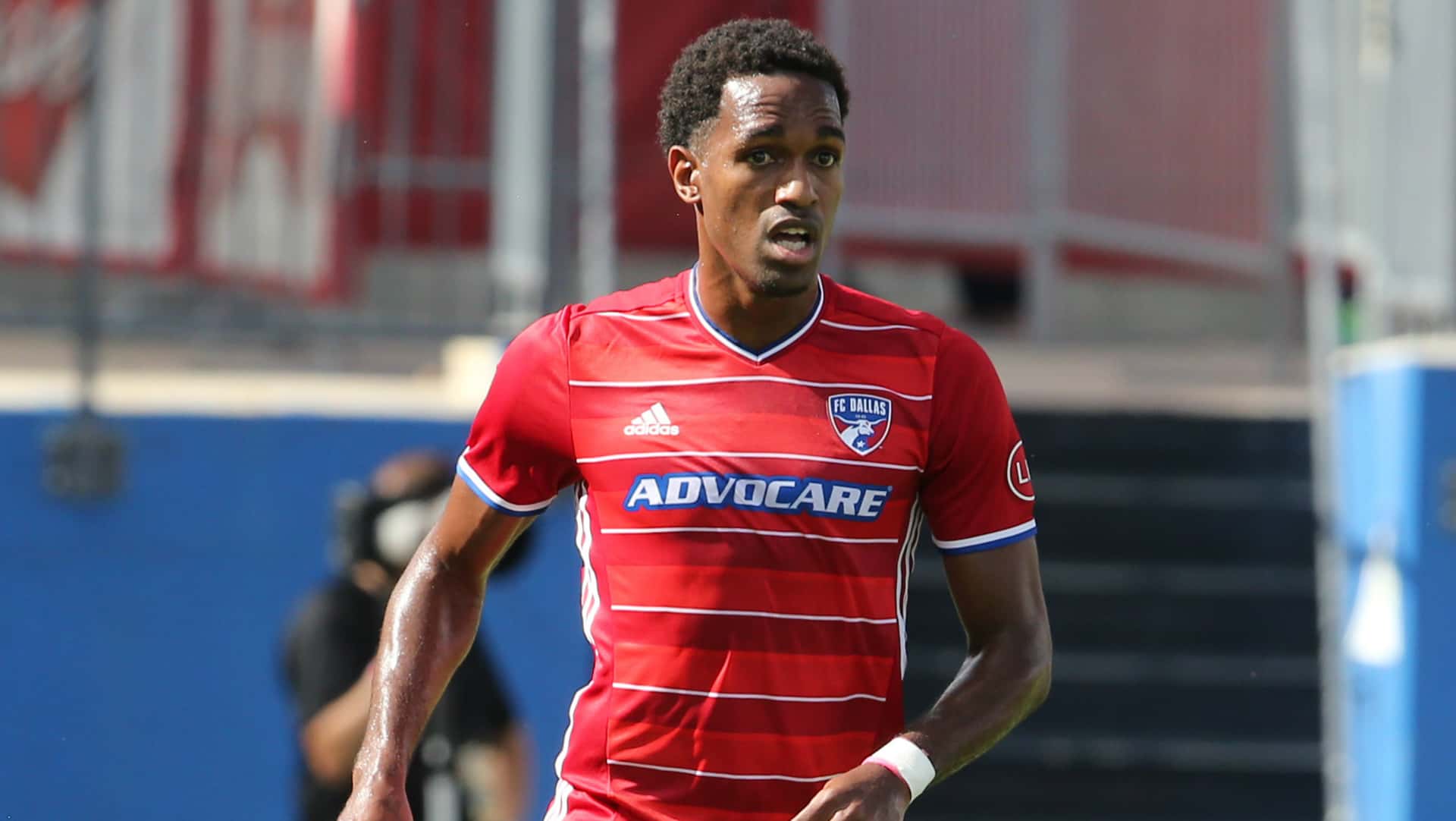 Harris won and Open Cup in his days with FC Dallas
“It’s exciting, it should be a good matchup,” said Harris, long-time captain of his native St. Kitts and Nevis national team. “My first time going back – Dallas is home away from home for me. I have a lot of friends, old teammates that are still playing. Some academy players are now professionals that I mentored a little bit. It will be fun going back and seeing faces again and seeing how they’ve improved, especially the young ones.”
When it comes to competition, Harris makes it plain he has totally switched allegiances since leaving FC Dallas after the 2017 season.

“We are going down to win the game and advance,” said Harris, who missed out on OKC’s sensational 4-3 win over USL toppers Tampa Bay Rowdies in the Third Round. “And when the game’s over we’ll be friends again. We’ve stayed in touch over the years and that’s my team in MLS, the team I support. But when it comes to competing against each other, even competing against my own brother, that’s just automatic.”
FC Dallas won the 1997 Open Cup, when the team was still known as the Dallas Burn, a year after Lamar Hunt and a group of investors initiated an experiment known as Major League Soccer (MLS). But Dallas failed to win another title until the 2016 edition of the Open Cup.
“2016 was a fantastic experience,” added Harris, a veteran of 34 who’s had stints in Spain and six different MLS clubs in a 16-year career as a pro. “We went to penalty kicks with this team, Oklahoma City, then won the next round and after every victory, I remember us saying we’re one step closer and maybe we can go all the way.”
FC Dallas’ 2016 cup-winning campaign started with a dramatic shootout over the Energy. Jordan Rideout opened the scoring for OKC and FC Dallas rallied on goals by Carlos Lizarazo to take a 2-1 lead into the 90th minute. Then Michael Thomas equalized for the Energy. Harris, a second-half substitute, converted a penalty kick as FC Dallas advanced 8-7 on kicks from the spot. 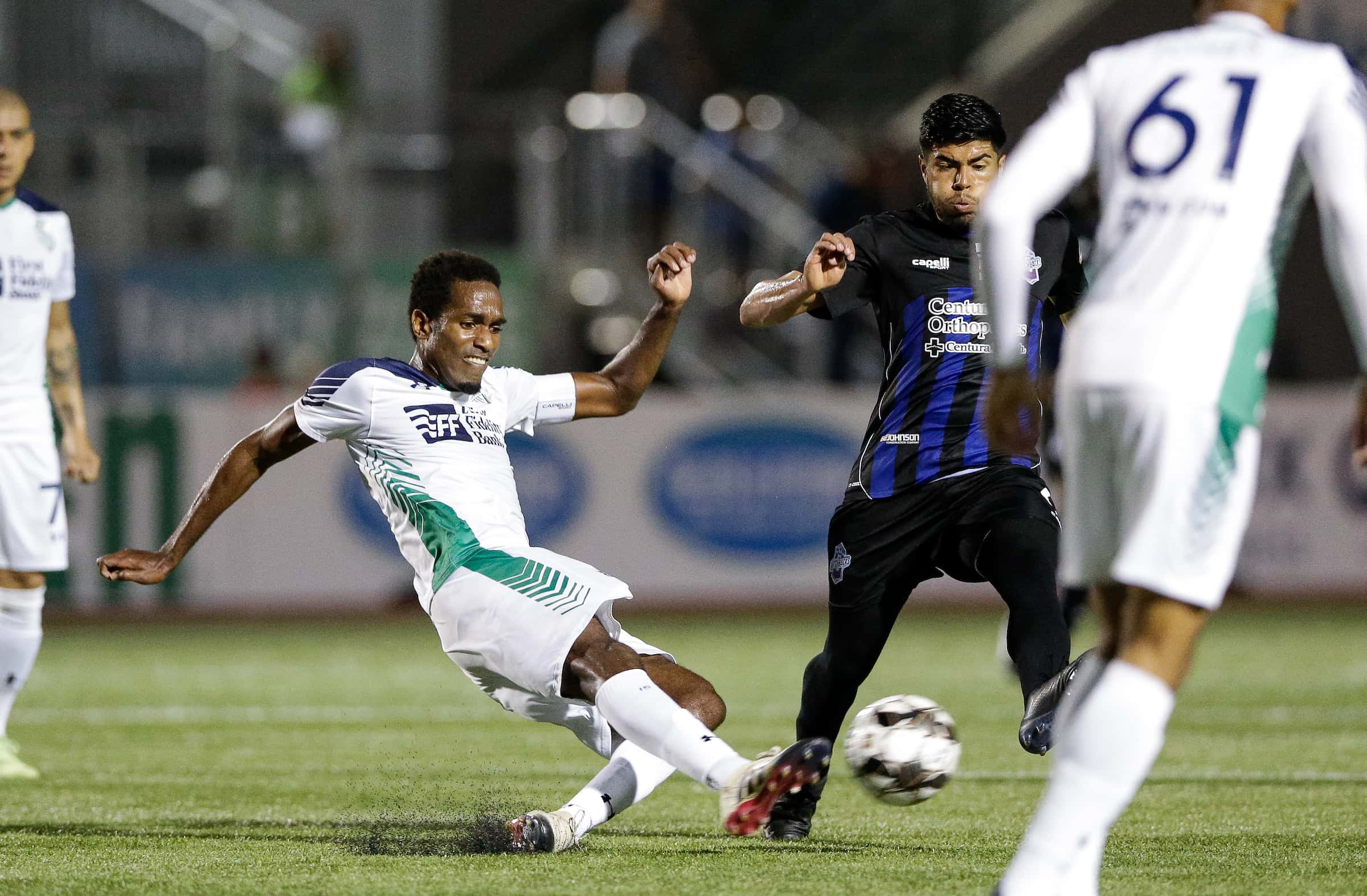 Atiba Harris has a reputation as an uncompromising competitor
Then came a 2-1 extra time win over the Colorado Rapids, Harris assisting on Maxi Urruti’s 96th-minute decider; a 1-0 victory at Houston; and another 2-1 extra time win in the Semifinals at the LA Galaxy, Dallas scoring in the 116th and 120th minutes.
That set up the final at home against the New England Revolution on Sept. 14, 2016. The Hoops were aiming to capture the elusive treble in American soccer – they were on track to win the Supporters’ Shield and would have home-field advantage in the MLS playoffs.
A Lamar Hunt U.S. Open Cup crown would be the first step. But Harris would not be able to pitch in – he was suspended for an accumulation of yellow cards. “I got there early to be in locker room and in the gym,” Harris recalled of that day. “And the owner [Clark Hunt] was pretty nervous for that game because he wanted to win it, since it was named for his dad. For him, it’s bigger than the money. He said that’s my father’s name on it and we need to have that trophy.”

Doing his Part From the Sidelines

“I told him the guys are ready and we’re going to win it,” Harris remembers. “New England scored first but we stormed back and it was a perfect example of how FC Dallas was under [then coach] Oscar Pareja.”

After a long weather delay, @EnergyFC & @TampaBayRowdies served up a thriller of a Third-Round opener with the Oklahomans winning the day 4-3 & moving on to a date with an @MLS side in the Fourth Round.

The Revolution team that day included former FC Dallas midfielder Je-Vaughn Watson, now with OKC. “We talk about it,” Harris said. “He [Watson] says ‘you took that Cup away from me’. So he has extra motivation – revenge against Dallas.”
FC Dallas and the Energy have had mostly cordial relations since the Oklahoma City side was established in 2014. Starting this year, OKC Energy is a member of the USL Championship, American soccer’s second professional tier.
“We were the USL affiliate of theirs [FC Dallas], and I have friends there,” OKC coach Steve Cooke said of the club he’ll look to upset in the Fourth Round. “[Coach] Luchi Gonzalez was part of the [Fédération Français de Football] coaching course I did, Ema Twumasi and Francis Atuahene [former Energy players] are still at Dallas, Je-Vaughn and Atiba, Amer Sasivarevic was a draft pick of FC Dallas and we play each other in preseason. There’s quite a few ties and they are just a couple hours down the freeway.
OKC’s drive to Dallas is a straight shot, some 200 miles down Interstate-35E. And the Energy will arrive as underdogs in a tournament conceived to give underdogs a chance. 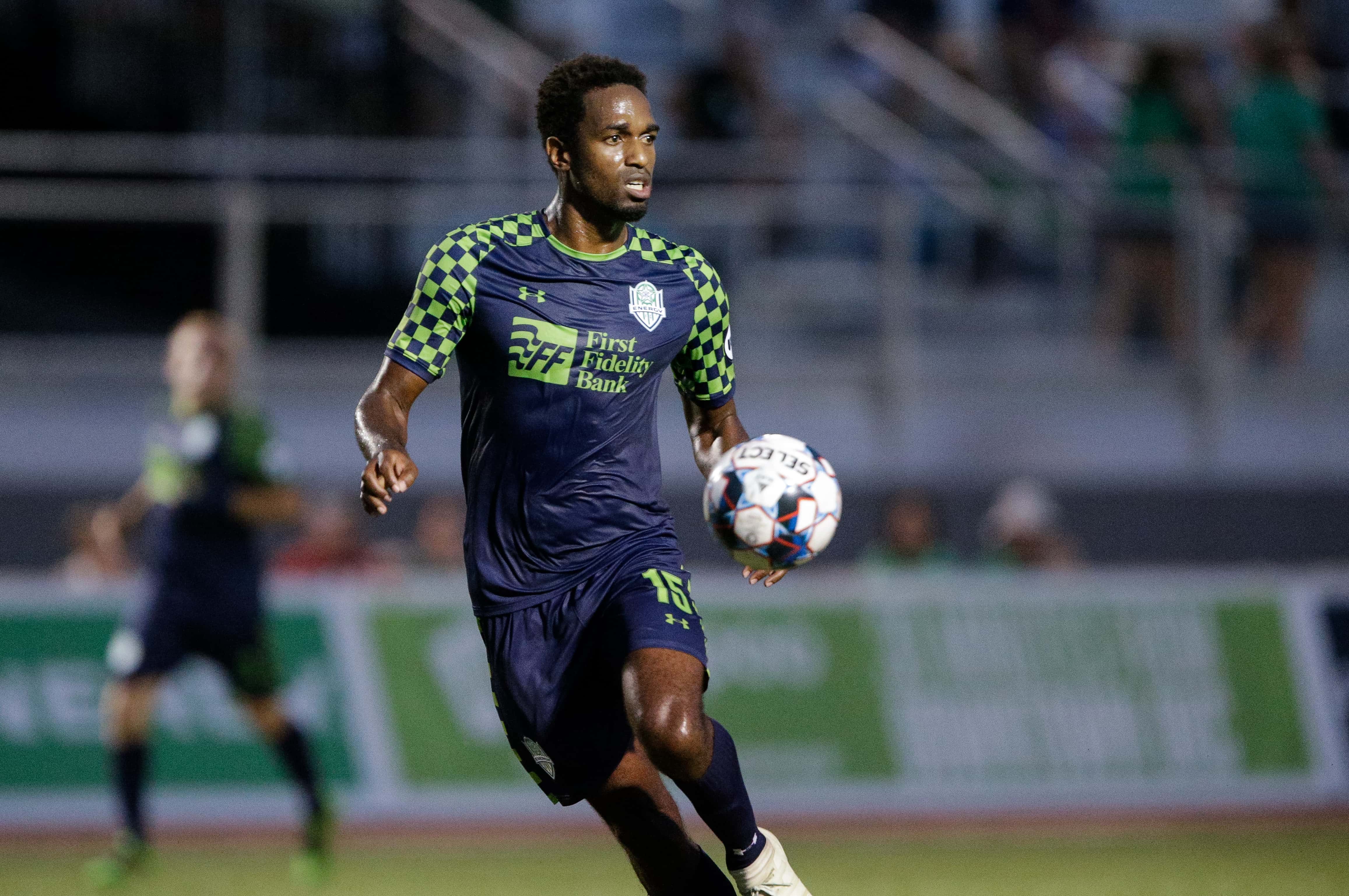 Now 34, Harris is entering the twilight of his career
“People around the country consider FC Dallas to be favorites,” Coach Cooke said. “They are well-coached, good players, good organization and, rightly so, they are favorites. We’re looking to go and perform as well as we can. Anybody has a chance against anybody, and we’re looking to give it our best possible effort and maybe cause an upset. I don’t think many are expecting us to do that, but I’ve been around coaching for a while and anything is possible.”
While FC Dallas may be deep, the Energy respond with a roster that includes veterans Cody Laurendi in goal and Kyle Hyland in defense; striker Deshorn Brown, who provided the deciding goal in a 4-3 victory over the Tampa Bay Rowdies in a lightning-delayed Third Round match; Cordell Cato, a 2012 Open Cup finalist with the Seattle Sounders; midfielder Rafael Garcia, a two-time MLS Cup champion with LA Galaxy and Omar Owayne Gordon (three goals in five games in his Open Cup career). Alvin Jones scored goals in the Concacaf Champions League and FIFA World Cup qualifying. Mike Da Fonte, Christian Eissele, Christian Ibeagha and Mekeil Williams also have deep Open Cup experience.

Then there is Alexy Bosetti, who won the 2013 FIFA U-20 World Cup with France, teaming up with household names of today like Paul Pogba and Rafael Varane. After playing most of his career with Nice and Stade Laval, Bosetti joined OKC via a connection through the FFF course Cooke participated in. In his Open Cup debut, Bosetti scored once and assisted Brown on the game-winner against the Rowdies. 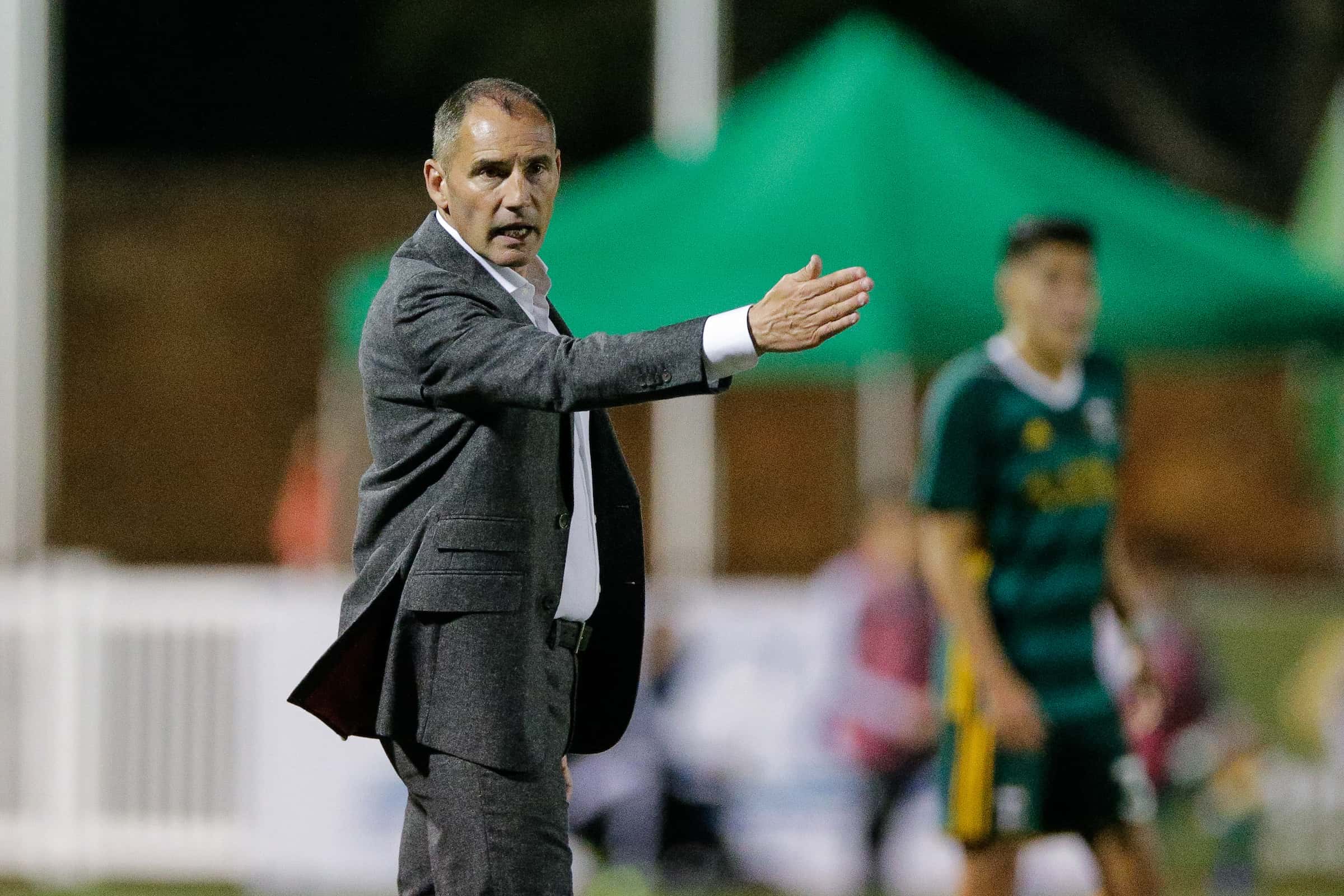 Coach Cooke has assembled an OKC side deep on Open Cup pedigree
“Not only was he interested in coming to Oklahoma City, he loves the place,” Cooke said of Bosetti. “His family is here and he’s doing a really good job. There is much more to come from him when he gets fully fit and adjusted to life here and the soccer here.”
FC Dallas are no longer holders of the Lamar Hunt U.S. Open Cup, and they’ve failed to advance past the Quarterfinals the last two seasons. But the trophy has a spiritual attachment to Dallas and the Hoops can be expected to raise their game this edition.
“Going back is going be an honor,” Harris concluded. “Everyone expects Dallas to win the game. We go in with no pressure and we have a lot of guys with experience in MLS, a lot of international players. So, who knows, it can go any way. I’ve been following it and there’s been a lot of crazy results.”