Graf in the Cup Groove for Memphis 901

Christmas didn't come early just once for Jochen Graf this year. You might say it came several times for the 29-year-old striker.

The first time came when he signed with the New York Cosmos in January, giving the veteran an opportunity to continue his soccer career. The second time came when the National Premier Soccer League (NPSL) club traded him to Memphis 901 FC, an expansion team in the USL Championship, four months later. 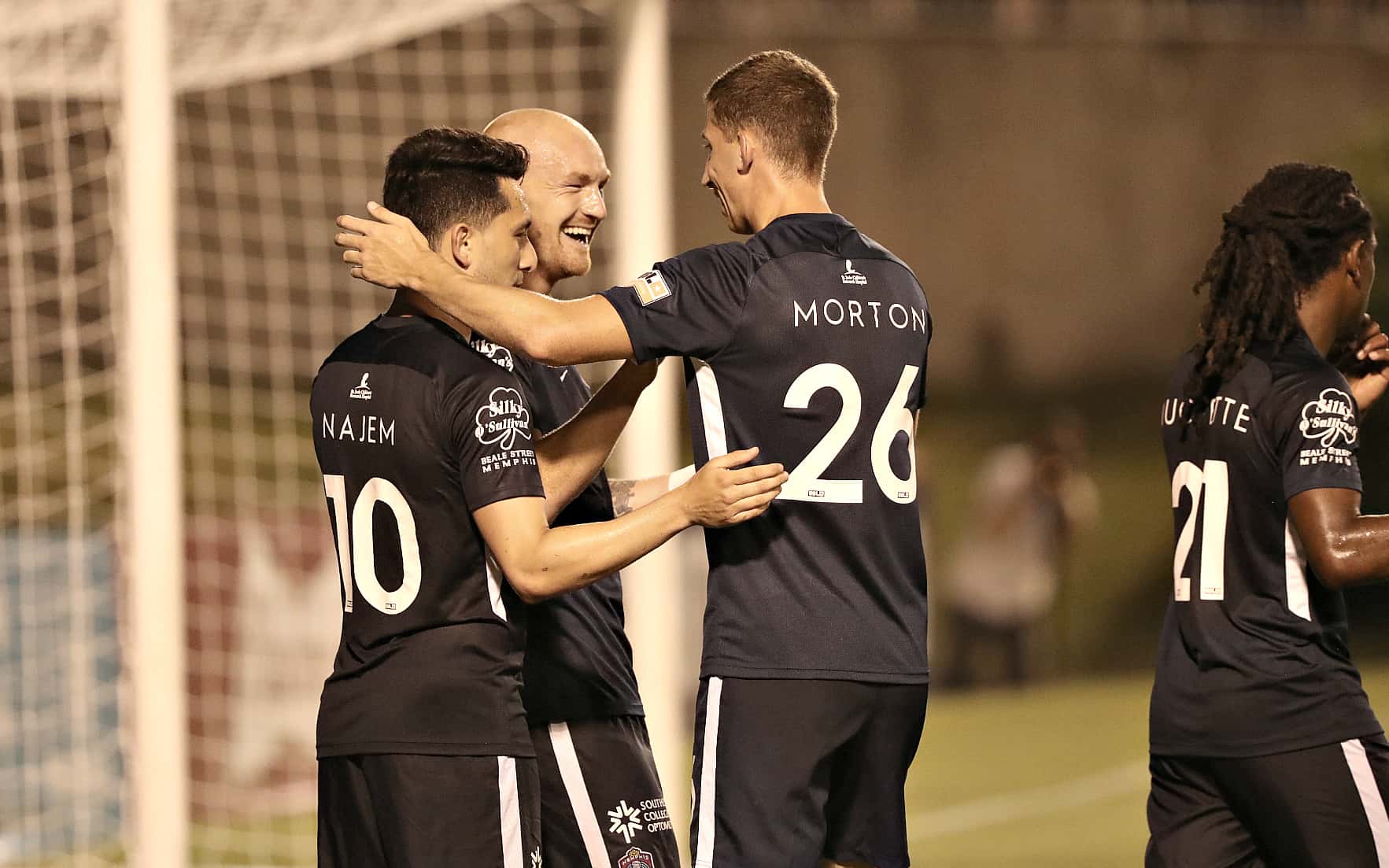 And the third time came in the Lamar Hunt U.S. Open Cup Third Round when Graf recorded a brace to pace Memphis to a 4-0 win over Hartford Athletic on May 29. It gave the first-year club an opportunity to meet a Major League Soccer (MLS) team, Orlando City SC, in the Fourth Round of the competition at Mike Rose Soccer Complex in Memphis, Tennessee on Wednesday, June 12.

Quite appropriate for someone who has been so dedicated to the sport that he has trained on Christmas Day as recently as 2018, Graf is humble enough to realize you can't take anything for granted these days, especially in soccer.

"It doesn't stop," he told ussoccer.com "When you look at it, you're competing against hundreds and thousands of players around the world that want your spot. You can only take off so much time. There is time you have to take to allow your body to recover. I've got it down to a pretty good science on what works good for me. I'm 29-years-old and always looking to improve. To get better and make my game better."

It couldn’t get much better for him than on May 29 when Graf tallied his first two Memphis goals to break his duck. With Memphis holding a 1-0 lead, Graf doubled the count in the 21st minute, heading home Cam Lindley’s long free-kick from eight yards out. He added another in the 59th minute, scoring from close range off a right-wing feed for a three-goal advantage. 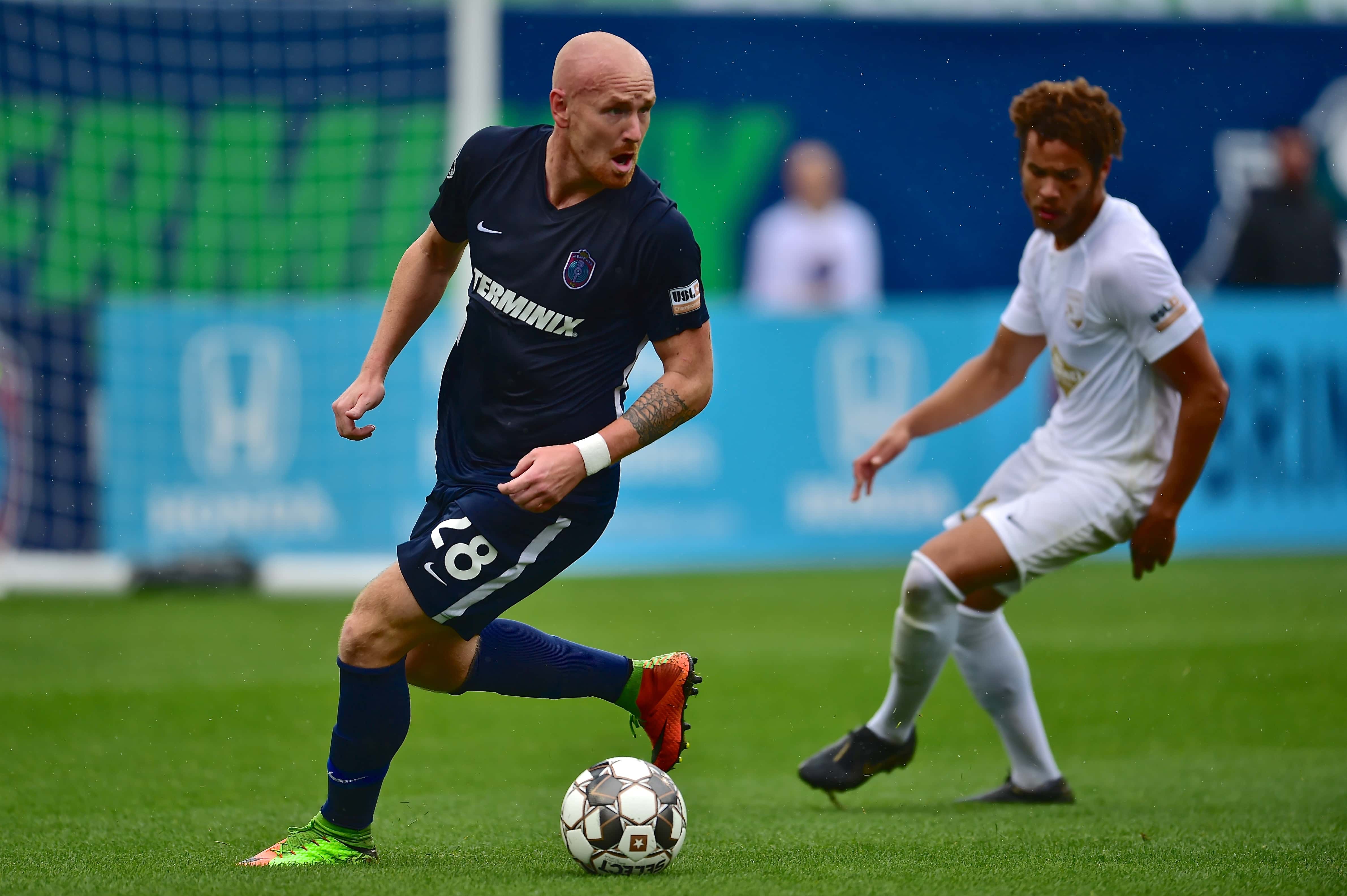 Graf is a penalty are predator for Memphis 901

"It was a great lift for the team," said Memphis head coach Tim Mulqueen. "We had been waiting for him to break out. You know how goal-scorers are. Once they get the first it's like the monkey's off their back. They can relax a little bit and sure enough he banged in a second one. He had an opportunity for a third. I expect him now to get on a run for us."

Memphis (2-7-4) are unbeaten in five of their last six games, including a pair of Open Cup victories. The streak was snapped in a 3-0 home loss to Indy Eleven this Saturday in league action.

"Anytime you get a win it's good for the team," Graf said. "You can say we don't have the same results so far in the league, but the way we are heading right now, I think the results in the Open Cup are kind of an indicator of where we're going. We're building in a good direction. The results in the league are beginning to turn to more wins than draws. We like the direction we're heading in now.

"It felt good for me to get off the mark and find the back of the net but there's chances I want back, so I can take that into next week. It's a good start but at the same point, the game was almost a week ago and it was out of my head the next day." 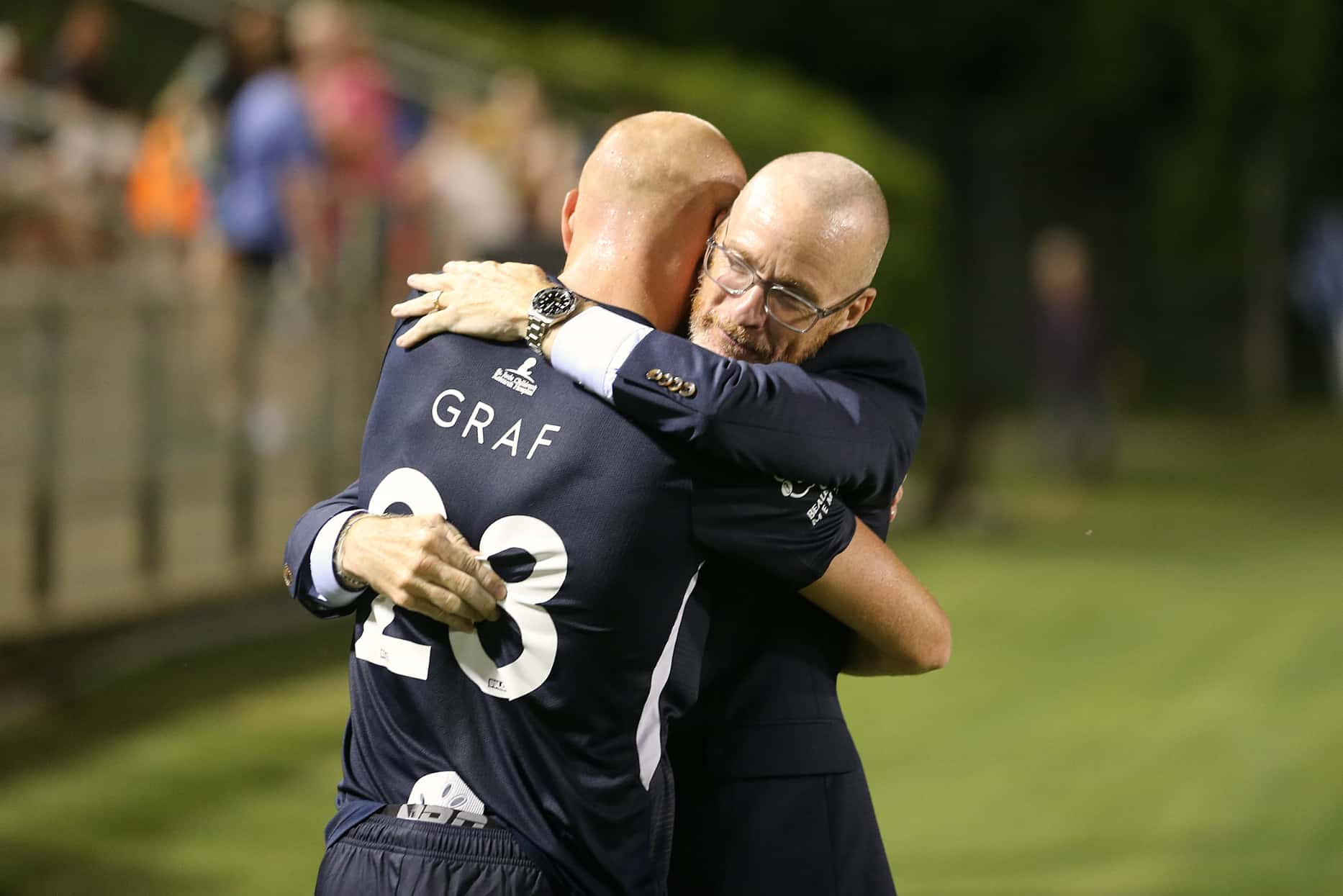 In some respects, you might call the 5-11, 165-lb. Graf a survivor because he has had to endure some shifty owners, injuries, bad luck (and some good fortune) during his seven-year professional soccer career.

His secret to keeping his career going? Keep grinding away.

Schellas Hyndman recruited Graf to play at his hometown school, Southern Methodist University in 2008. But Graf tore his meniscus during preseason and Hyndman accepted the head coaching position with FC Dallas. He was forced to redshirt. Graf decided to transfer to Bradley University where he established himself as a starter.

After graduation, Graf signed with TSV Hertha Walheim in the fifth tier of German soccer in 2013. That experience certainly was an eye-opener. He was hoping to join a team in the fourth tier, but the club's assets were seized by a bank. In a game for Walheim, Graf broke three ribs and was sidelined for six weeks.

He then discovered that the Walheim owner was trying to sabotage his move to a fourth-division side and keep him for another half season to help his club from being relegated.

“That was a big fiasco," Graf said. "It was really baptism of fire for me to go through all of this to see what the reality of being a professional player in Europe can look like. I learned a lot from the situation."

He eventually played for three Swedish clubs -- Lidköpings FK, Carlstad United BK and Oskarshamns AIK – from 2014-2016. He starred for the Rochester Rhinos (USL), connecting for 11 goals in 30 matches in 2017 before the club went dormant last year. 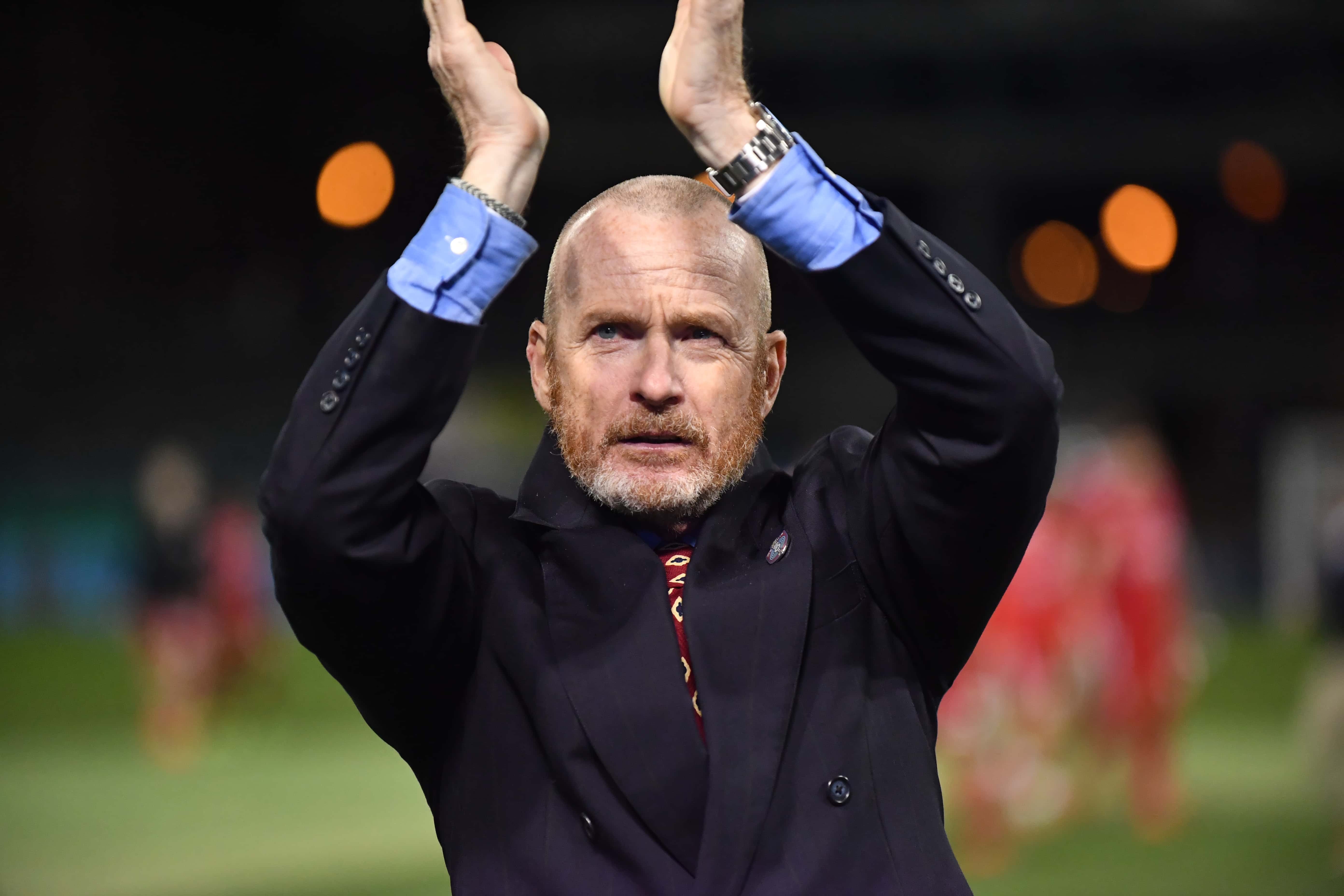 Coach Mulqueen has some momentum in the 2019 Cup

Graf then joined the Tampa Bay Rowdies (USL). He scored twice against Major League Soccer clubs in preseason, picked up an injury and lost his starting spot. He was loaned to Reno 1868 for the rest of the USL season, scoring a goal against Portland Timbers 2 to help the Nevada team clinch a spot in the play-offs.

Long story short, Graf now will try to fill the net for Memphis on a regular basis. "He came in and we needed him right away," Mulqueen said. “So, we threw him in. He had to get to know the players, get to know how balls were going to be played to him, things like that. He's been working really hard. Even in games he didn’t score, he was very effective in the pressure he applied and causing commotion up top to allow other players to get free and get chances."

If the name Mulqueen is familiar to you, it should be. He has been coaching for almost three decades. He was Tim Howard's first coach with the North Jersey Imperials in 1997. Howard, who is finishing a legendary career for club and country with the Colorado Rapids this season, is part-owner of Memphis 901FC.

Mulqueen is also gunning for his second Open Cup title. The first was won as an assistant coach with the Kansas City Wizards (now Sporting Kansas City) on a golden goal.

.@Memphis901FC cruised from the opening whistle & handed a 4-0 hammering to @hfdathletic to move through to the Fourth Round & a date with a side from @MLS (Fourth Round draw tomorrow 11 a.m. ET @OpenCup).

"I remember saying to myself, I've won the MLS Cup and now I've won the oldest trophy in U.S. soccer history," Mulqueen said of the Dewar Cup, the trophy, which is on display at the National Soccer Hall of Fame in Frisco, Texas that sees the name of every Open Cup winner engraved on its brass plated rungs. "That was tremendous, considering all the people who have participated in the tournament, all the great teams that came before us. That started soccer and kept soccer going when there was no professional league. It was a real honor to lift that trophy that day."

All Eyes on Orlando

No non-MLS team has won the Open Cup since the Rochester Rhinos did in 1999. Mulqueen and Graf would love to break the string, but first things first. Orlando City SC are the first order of business.

"It's cool to play an MLS team," Graf said. "We have a lot of players who have played at that level or who could easily play at that level. It's a good chance for us to show that we belong on the same field. That we can play with anybody. We see a good chance to take on a big opponent with a lot of with attention on the game. Our focus is just to go out and play the way we play and hopefully we can get by them and advance." 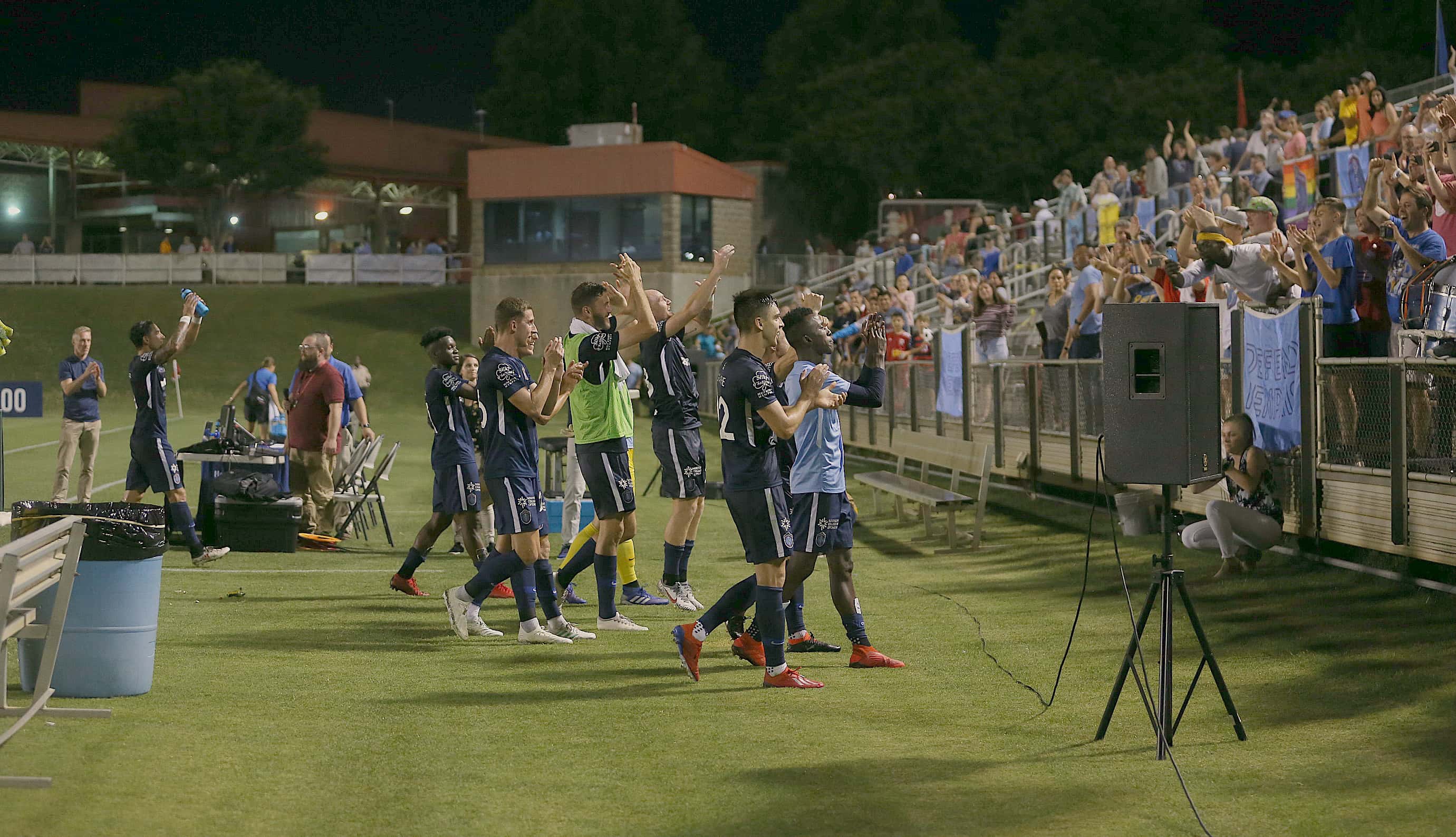 When Mulqueen met with his team prior to the season, one of his goals was to reach the Fourth Round of the Open Cup – when the MLS teams start to compete. "We've checked that box off," he said. "We want to go out give our best effort against Orlando. We certainly respect them and MLS. At the same time, we're going to go out and compete. We're going to put our best foot forward and try to win the match.